Thousands march in show of support for Puerto Rico

The demonstration, called the Unity March for Puerto Rico, was attended by Broadway star Lin-Manuel Miranda and others who have been critical of the Trump administration’s response to the hurricane. 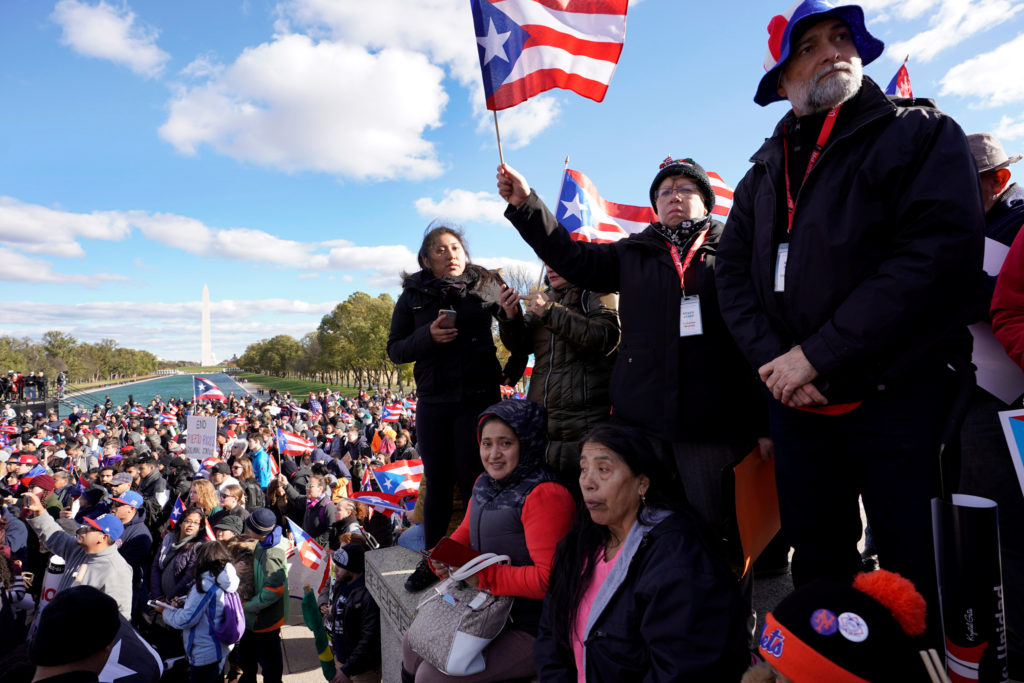 Members of the Hispanic Federation participate in the Unity March to highlight the ongoing humanitarian and natural disaster crisis in Puerto Rico, at the Lincoln Memorial in Washington, D.C., on Nov. 19, 2017. Photo By Yuri Gripas/Reuters

About 50 percent of Puerto Rico remains without power and some residents continue to struggle to find fresh water and medicine on the island of 3.4 million people.

More than 140,000 Puerto Ricans have fled the island for the U.S. mainland after Hurricane Maria’s Category 4 winds tore through the island in late September, including at least 14,000 public school students, according to the Associated Press.

On Sunday, demonstrators held Puerto Rican flags on the National Mall in Washington, D.C., as speaker after speaker lined up to implore the U.S. government and Federal Emergency Management Administration to attend to the problems in Puerto Rico as quickly as they would for U.S. states.

A sea of Puerto Rican flags outside the US Capitol this morning. I’ve never quite seen anything like it. Thousands here for the #unitymarchforpuertorico to call on the rest of America to help the island. pic.twitter.com/jOlo0qoVvy

Among their demands were legislative action that would “uplift the people of Puerto Rico” and bring long-term economic stability. They also called for the U.S. government to eliminate the island’s debt, which reached nearly $70 billion in 2015, according to the U.S. Government Accountability Office.

While areas in Texas and Florida continue to clean up from their own devastating hurricanes earlier this year, basic services have in large part been restored.

Left: Actor, composer and playwright Lin-Manuel Miranda participates in the Unity March at the Lincoln Memorial in Washington, D.C., to highlight the ongoing humanitarian and natural disaster crisis in Puerto Rico, November 19, 2017. Photo by Yuri Gripas/Reuters