PORTSMOUTH, England (AP) — President Donald Trump read from a prayer delivered by President Franklin D. Roosevelt as he joined other world leaders and veterans Wednesday in marking the 75th anniversary of D-Day.

Roosevelt went on national radio on June 6, 1944, to address the U.S. for the first time about the Normandy invasion. Trump, with images of an American flag and Roosevelt projected behind him, read to crowd: “Almighty God, our sons, pride of our nation, this day, have set upon a mighty endeavor, a struggle to preserve our republic, our religion and our civilization and to set free a suffering humanity.”

Trump traveled to the southern coast of England Wednesday to pay respects to American service members and allies who helped rescue Europe from Nazi Germany. He sat between Queen Elizabeth II and the first lady during the program, which focused on a telling of events leading up to D-Day. Some 300 World War II veterans also attended the seaside ceremony.

A chilly breeze blew off the English Channel as Trump arrived for the event, the first of two he is attending to mark the 75th anniversary of D-Day when the Allied soldiers, sailors and airmen conducted an invasion that helped liberate Europe from Nazi Germany. 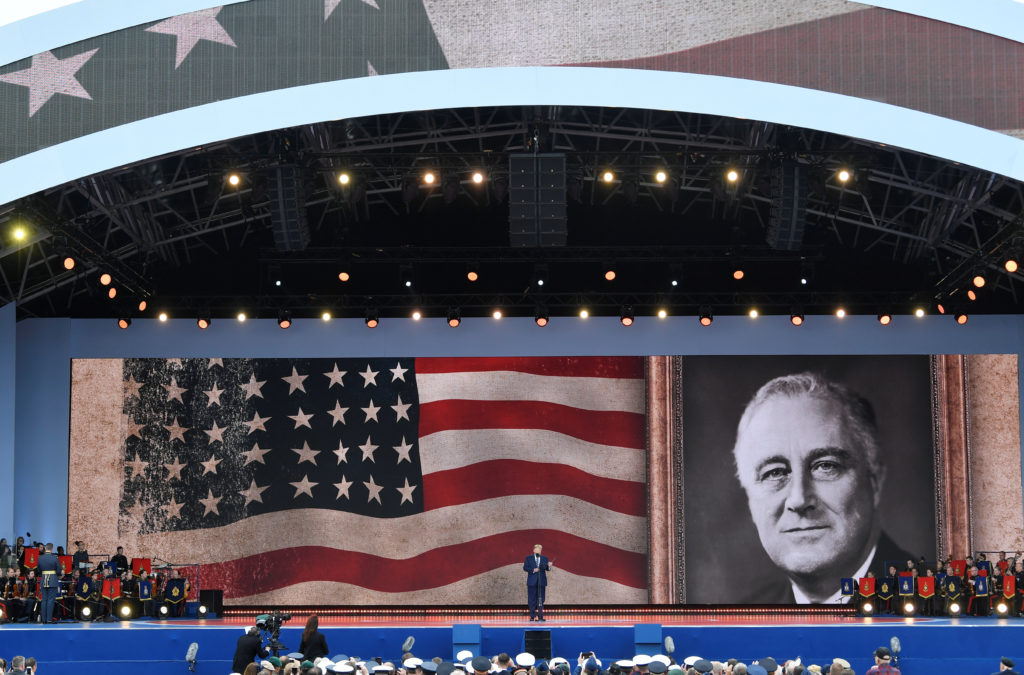 President Donald Trump speaks on stage during an event to commemorate the 75th anniversary of D-Day, in Portsmouth, Britain, June 5, 2019. Photo by Toby Melville/Reuters

Trump joined in giving a standing ovation to a group of World War II vets who appeared on stage as the commemoration began. He sat in a VIP area in between the queen and his wife, first lady Melania Trump.

During a news conference Tuesday, Trump said he is grateful for the warm welcome he received from the British royal family and prime minister as “we remember the heroes who laid down their lives to rescue civilization itself.” He played down protests of his visit, describing the thousands of people who demonstrated in London as a “small protest.”

Trump has used his speeches to emphasize a longstanding bond between the U.S. and Britain. He noted that more than 1.5 million Americans were stationed in England in advance of the invasion.

“The bonds of friendship forged here and sealed in blood on those hallowed beaches will endure forever,” Trump said at the news conference.

Also on Tuesday, Trump and first lady Melania Trump toured the Churchill War Rooms, the British government’s underground command center during World War II. Then it was time for a fancy dinner that the Trumps hosted at the U.S. ambassador’s residence for Prince Charles, his wife, Camilla, and other dignitaries.

While at the Churchill War Rooms, he worked to clean up a diplomatic spat, telling “Good Morning Britain” host Piers Morgan that he meant no royal insult when he used the term “nasty” in discussing the American-born Duchess of Sussex, Meghan Markle. The phrase generated a lot of media coverage and Trump has worked diligently to explain that he was speaking specifically on her comments about him, not about her.

Trump said: “She was nasty to me. And that’s okay for her to be nasty, it’s not good for me to be nasty to her and I wasn’t.”

Trump said the controversy did not come up when he spoke with Markle’s husband, Prince Harry, who he says “couldn’t have been nicer.”

Trump was also asked about whether he would support banning silencers after a gunman in Virginia used two semi-automatic handguns, a silencer and extended ammunition magazines to slaughter 12 people at a municipal building.

Trump said it was something “I’m going to seriously look at.”

Trump has strongly resisted stricter gun laws in response to mass shootings in the United States. However, the Trump administration has banned bump stocks, an attachment used by a gunman in a 2017 massacre in Las Vegas, Nevada, to make his weapons fire rapidly like machine guns. Trump said “the bad guys are not getting rid of their guns.”

While overseas, the president’s mind appeared to be on matters back at home, as he unleashed Twitter attacks on Senate Minority Leader Chuck Schumer, former Vice President Joe Biden and even actress and singer Bette Midler. A couple of the broadsides came in about 1 a.m. local time.

Trump will also make his first presidential visit to Ireland on Wednesday, spending two nights at his golf club in Doonbeg, which sits above the Atlantic. After Dublin balked at holding a meeting in the city, a deal was struck for Trump to meet Irish Prime Minister Leo Varadkar at the VIP lounge at Shannon Airport, hardly the grand setting usually afforded a meeting of world leaders.

Associated Press writers Gregory Katz and Jill Lawless in London and Darlene Superville and Deb Riechmann in Washington contributed to this report.