WASHINGTON (AP) — After days of resisting screening for the coronavirus, President Donald Trump tested negative for the virus, officials said Saturday night. Meanwhile, the White House began checking the temperature of anyone coming into close contact with the president and other officials.

Prior to his testing, Trump said his personal physician told him he didn’t show symptoms and didn’t need to take the test. But Trump decided to do it anyway after repeated questions from reporters about why he was hesitating to undergo screening when he had been exposed to at least three people who have tested positive for the virus.

The White House released the test results just hours after Trump told reporters that he had been tested and that his temperature was “totally normal.” He was recently in contact with three people at his Florida resort who have tested positive for the virus, including two aides to Brazilian President Jair Bolsonaro.

“One week after having dinner with the Brazilian delegation in Mar-a-Lago, the President remains symptom-free,” Sean Conley, the president’s physician, said in a memo. 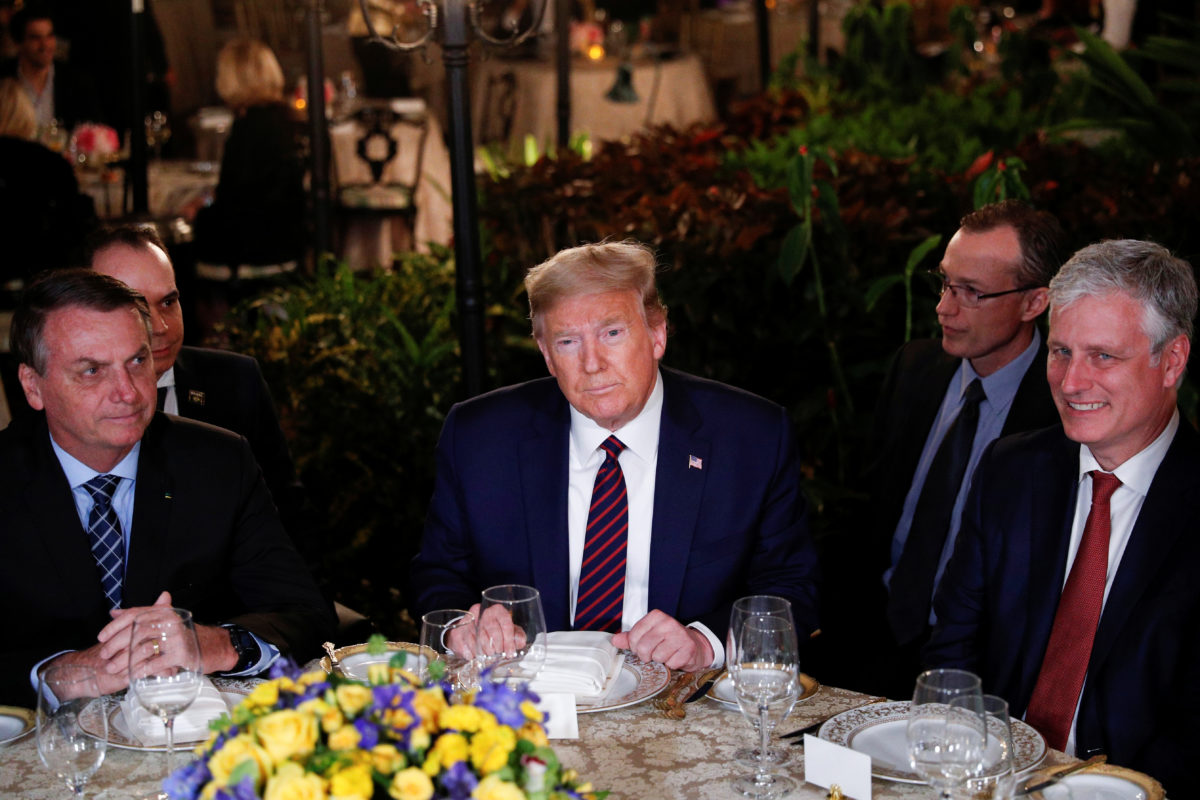 Multiple lawmakers and countless citizens across the country who have had the same degree of exposure have not only tried to get tested, but also chosen to quarantine themselves as a precaution and to avoid potentially infecting others.

The pandemic has now infected more than 2,200 people in the U.S. and caused at least 50 deaths.

The president, according to two people close to the White House, had been reluctant to take the test for fear it would project weakness or worry. Trump wanted to appear in full control during the crisis, and had expressed concerns that taking personal steps could undermine that appearance.

But as the White House grappled with repeated exposures by Trump and multiple senior aides, it tightened precautions. On Saturday, the White House announced that it was conducting temperature checks on anyone who was in close contact with Trump and Vice President Mike Pence, including reporters who attended the White House briefing Saturday and anyone entering the Oval Office.

To that end, a representative from the White House physician’s office took the temperature of members of the media at the briefing, going around and putting a device to their heads. One reporter with a suspected elevated temperature was not allowed in.

Pence wrote a memo to White House staff Saturday reminding them to take precautions such as avoiding physical contact, washing hands frequently and staying home when sick to help the administration keep the virus at bay.

“It’s imperative each one of us do our part to take the proper precautions to keep ourselves and our colleagues safe,” Pence wrote. “As an employee aboard the White House Complex, we have an additional duty to protect the health of our Executive Branch and those working with us.”

Trump, 73, is considered to be at higher risk of complications from the disease because of his age. He has long tried to minimize the threat posed by the virus and continued to engage in behaviors that health officials are warning the public against.

On Friday, Trump shook the hands of multiple officials at his Rose Garden news conference and he has continued to appear at large gatherings despite tweeting Saturday morning that Americans should be practicing “SOCIAL DISTANCING!”

“It almost becomes a habit,” Trump said when asked why he continues to shake hands contrary to Centers for Disease Control and Prevention guidelines.

“People come up to me, they shake hands, they put their hand out, it’s sort of a natural reflex,” he said. “We’re all getting out of it. All of us have that problem.” He added: “Shaking hands is not a great thing to be doing right now, I agree.”

The Brazilian Embassy in Washington said late Friday that the country’s chargé d’affaires, Nestor Forster, tested positive after sitting at Trump’s dinner table. So, too, did a top aide to Bolsonaro, who took a photo with Trump and attended a party with him, and another person who attended a campaign fundraiser with the president that Sunday, according to two Republican officials who spoke on condition of anonymity in order to discuss private health matters.

Republican chairwoman Ronna McDaniel, who earlier this month traveled to a campaign rally with Trump on Air Force One, awaited her own test results after experiencing a fever and flu-like symptoms. She and her family were quarantining at home, the RNC said Saturday.

A handful of White House staffers were tested for the virus after exhibiting flu-like symptoms, but all tested negative, according to a senior White House official. Flu activity in the country is currently high.

The White House has been saying, citing CDC guidelines, that the president and other White House officials don’t need to be tested or isolate themselves unless they are exhibiting symptoms, even though that advice is contradicted by many health professionals who note that the virus can be spread even by people who are asymptomatic.

The reporter who was not allowed into the White House briefing Saturday had a temperature above the 100.4-degree guidelines in three checks over 15 minutes, tweeted Pence’s spokeswoman, Katie Miller, citing the White House Medical Unit.

Public health officials say that people with a cough and elevated temperatures of 100.4 degrees or higher are deemed concerning.

Dr. Deborah Birx, who is helping coordinate the U.S. response to the outbreak, noted that testing results reflect a snapshot in time and that it’s crucial for people to maintain precautions.

“When you get a negative test, that means you’re negative that day,” Birx said. “That doesn’t mean that you couldn’t get the virus spreading overnight, because it replicates in your nose and your nasal secretions, and you would have a positive test tomorrow.”

Bev Banks contributed to this report.

Left: U.S. President Donald Trump speaks at a press briefing with members of the Coronavirus Task Force at the White House in Washington, U.S., March 14, 2020. Photo by Yuri Gripas/Reuters.