BEAUREGARD, Ala. — Standing on a hill overlooking a debris field, President Donald Trump on Friday surveyed mangled trees and other damage that was left behind in a rural Alabama town after a powerful tornado roared through, killing nearly two dozen people.

“We saw things that you wouldn’t believe,” said Trump, who first glimpsed the area by helicopter before he and first lady Melania Trump arrived in Beauregard, which bore the brunt of Sunday’s storm, and began meeting with victims.

The president visited a section of town that has been decimated by the tornado, with houses torn from foundations and tree roots pulled from the ground. Mangled metal siding, wood planks and piping lay strewn on the ground, along with the remnants of everyday life: items of clothing, a sofa, a bottle of Lysol cleaner, and a welcome mat encrusted with dirt.

Trump was briefed by a local official as he stood outside in the open. He also met with families affected by the storm, listening to their stories and, in some cases, reaching in to offer hugs.

The president and his wife also visited a disaster relief center at Providence Baptist Church in Opelika, where people were coming in search of clothes and such basic supplies as toiletries, diapers and food.

Trump was touring rural Lee County in eastern Alabama, where 23 people were killed after Sunday’s massive EF4 tornado that cut a path of destruction nearly a mile wide with 170 mph (270 kph) winds. It was one of at least 38 tornadoes confirmed to have lashed the Southeast in a deadly weekend outbreak.

Before Trump arrived in Beauregard, Renee Frazier stood amid bricks and lumber that used to be her mother’s home and waved as the helicopter carrying Trump passed overhead. Minutes before, Frazier had been arguing with relatives who opposed Trump’s visit, calling it more about politics than compassion.

Frazier disagreed, saying “I want the president here to see what happened to my mom’s house. I want him right here on this land because my mom is about love and unity.”

Down the road, where several people died, Trump supporter Bobby Spann said he hoped the president learned “how to be a Southerner, and how to respect people” during his brief visit.

Spann, 63, said he also hoped Trump realizes how much help is needed. The tornado had partially peeled away the roof of Spann’s mobile home.

“Houses need to be replaced. You can’t help the dead folks, but you can try to help the ones that’s still living,” said Spann, chewing on a yellowroot twig. 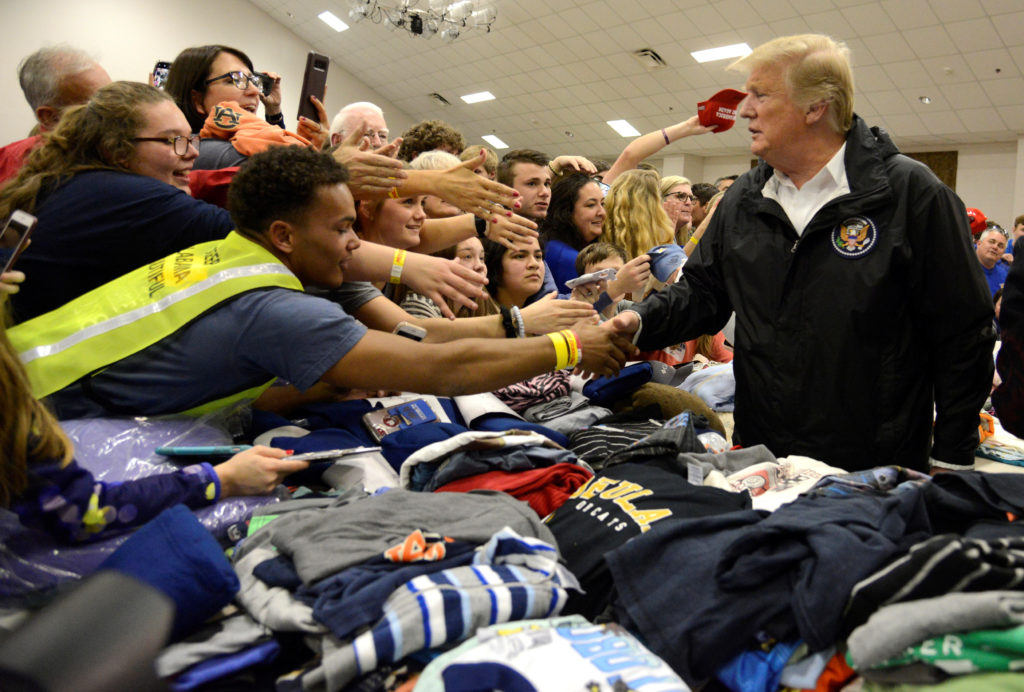 Trump has said he’s instructed the Federal Emergency Management Agency to give Alabama “the A Plus treatment” as the state recovers. The Alabama damage was officially deemed a disaster on Tuesday, with Trump ordering federal aid to supplement state and local recovery efforts.

The twister that struck Beauregard was the deadliest to hit the U.S. since May 2013, when an EF5 twister killed 24 people in Moore, Oklahoma.

The Alabama dead included four children and a couple in their 80s, with 10 victims belonging to a single extended family. Several people in Georgia were injured by twisters that also extended to Florida and South Carolina, according to the National Weather Service.

Trump had said earlier this week that the country was “sending our love and prayers to the incredible people of Alabama” and that “whatever we can do, we’re doing.” He was traveling to politically friendly territory: Alabama supported Trump by a wide margin in the 2016 presidential election.

He carried about 60 percent of the Lee County vote in 2016 and blue Trump flags flying outside home are a frequent sight in Beauregard.

Trump’s reaction to natural disasters at times has seemed to vary depending on the level of political support he’s received from the affected region.

In the months after wildfires scorched California, Trump threatened to cut off federal aid unless the state embraced forest management policies he championed.

He also engaged in a sustained back-and-forth with lawmakers from hurricane-whipped Puerto Rico, repeatedly blaming the territory for its problems and noting how much money recovery efforts had cost the federal government.

The administration at one point considered redirecting disaster aid from places like Puerto Rico and California to pay for the president’s long-promised U.S.-Mexico border wall. The administration ultimately chose to target other sources of federal dollars.

Trump had already been scheduled to fly south Friday for a weekend at his private Mar-a-Lago club and will head there from Alabama.