US marks King holiday amid fears of deep racial divisions

DETROIT — To commemorate the Rev. Martin Luther King Jr., Nicholas Thomas and more than 100 other volunteers will board up vacant houses, install school safety signs and make other improvements to a Detroit neighborhood. Their mission is to celebrate King’s legacy by being good neighbors and helping lift up a primarily black school in one of the poorer areas of the city.

As Thomas fans out across the neighborhood with hammer and nails, King’s legacy of peace and racial and social justice will be foremost in his mind. But at the same time, he’s struggling to come to grips with the deep racial divisions roiling the nation under President Donald Trump.

“Dr. King wanted unity. We have Trump separating immigrants … the wall,” said the 19-year-old Thomas who is black.

As the nation marks the holiday honoring King, the mood surrounding it is overshadowed by deteriorating race relations in an election season that has seen one candidate of color after another quit the 2020 presidential race.

Two black candidates — U.S. Sens. Kamala Harris and Cory Booker — and the lone candidate of Hispanic ancestry, former Housing Secretary Julian Castro, have dropped out of the Democratic race for the White House.

“That scares me a lot,” said Deja Hood, 21, of Chicago, a senior at Eastern Michigan University. “Who is going to really back our voicing? You can’t understand a minority if you’ve never been in a minority situation. Even though you can advocate for us all day, you could never understand the issues we go through on a daily basis.” 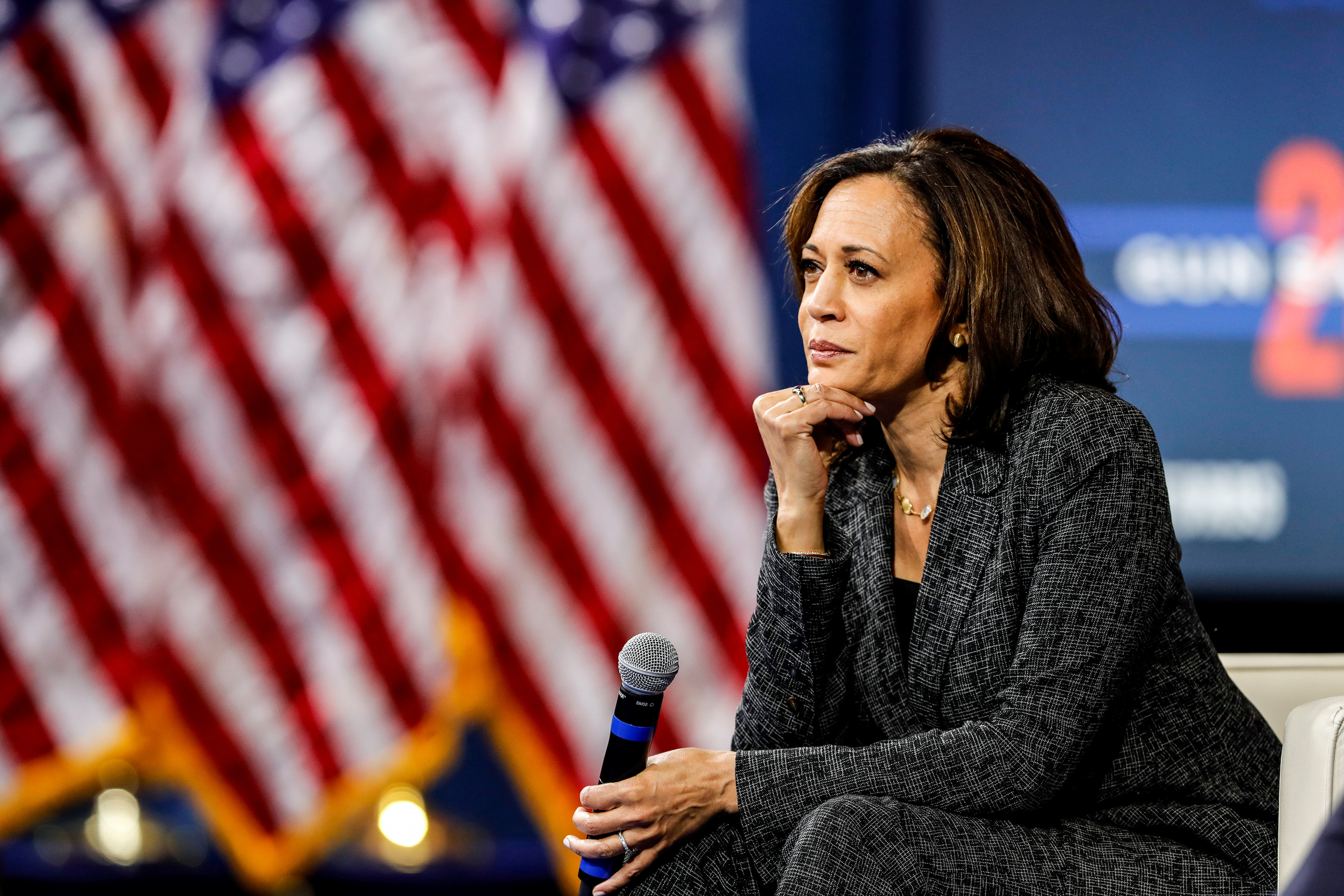 U.S. Democratic presidential candidate Sen. Kamala Harris (D-CA) listens to a question from the audience during a forum held by gun safety organizations the Giffords group and March For Our Lives in Las Vegas, Nevada, U.S. October 2, 2019. Photo by Steve Marcus/Reuters.

The front-runners in the field are all white men and women.

“It’s disappointing, but really not surprising. You look at it and think, ‘damn, now what?'” said Xavier Cheatum, 22, an African American senior at Eastern Michigan who along with Hood is participating in King events on the school’s Ypsilanti campus, west of Detroit.

People have the right to be — and should be — concerned about the state of race relations and the way people of color, in particular, are being treated, said Jill Savitt, president of the National Center for Civil and Human Rights in Atlanta.

“What we’re seeing right now, it’s very public and people are showing their hatred openly, but it doesn’t mean it wasn’t there,” Savitt said. “There is a coming realization in our country. We have to come to a reckoning about our past and the truth about our history from slavery to the lynching era to Jim Crow. Only with real honesty about our situation can we come to some reconciliation and move on to fulfill King’s hope and dream of a real, peaceful multicultural democracy.”

It doesn’t help when elected leaders don’t — or are slow to — stand against hate and intolerance, she added.

Trump referred last year to a predominantly African American congressional district that includes Baltimore as a “disgusting, rat and rodent infested mess.” During a 2018 immigration conversation in the Oval Office, he disparaged Haiti and some African countries with coarse language.

And following a 2017 clash between white nationalist demonstrators and counterprotesters in Charlottesville, Virginia, Trump said there were “very fine people on both sides” and that there was ” blame on both sides.” One anti-racism activist was killed. 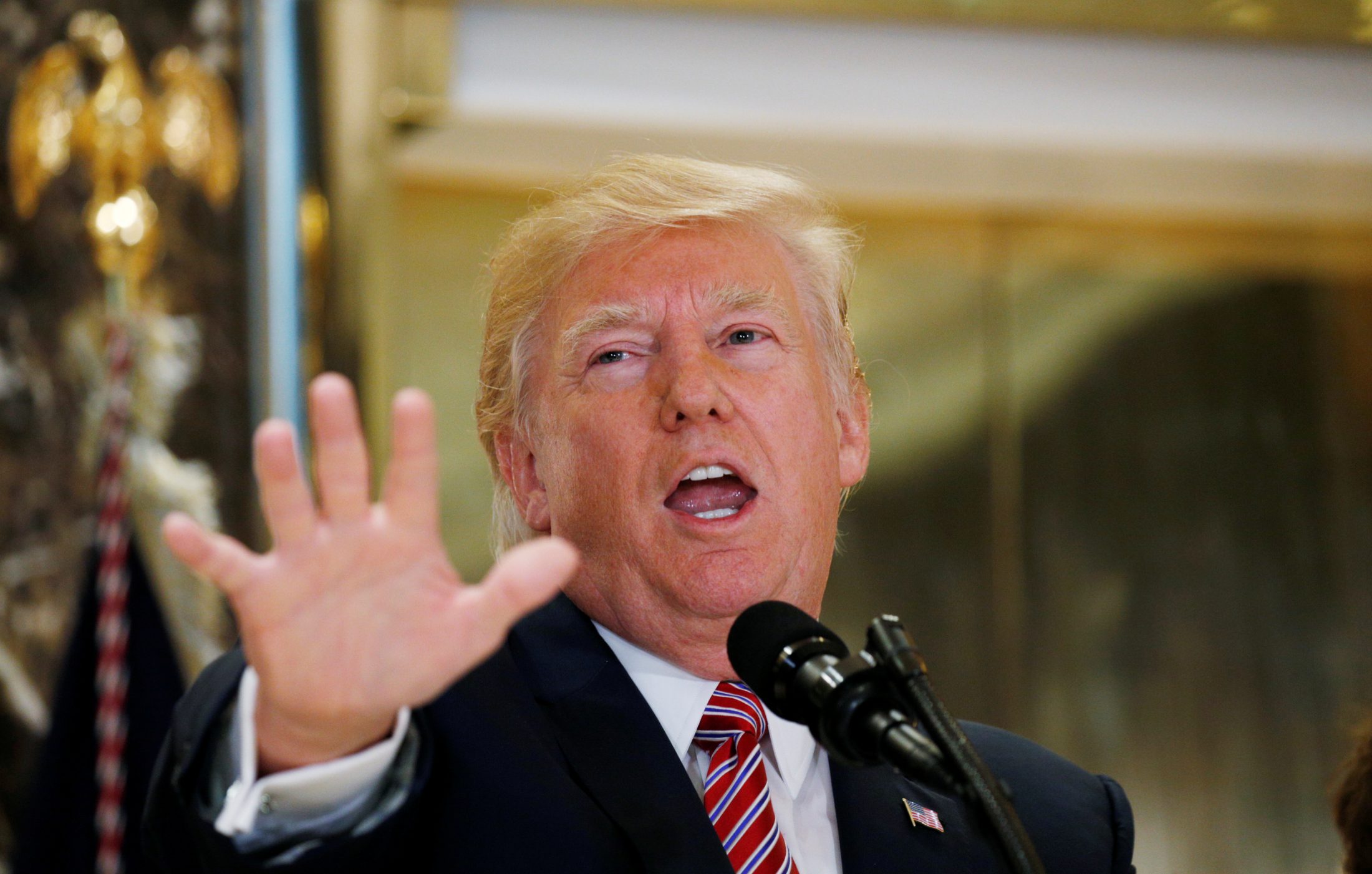 U.S. President Donald Trump answers questions about his responses to the violence, injuries and deaths at the “Unite the Right” rally in Charlottesville as he talks to the media in the lobby of Trump Tower in Manhattan, New York, U.S., August 15, 2017. Photo by Kevin Lamarque/Reuters.

In 2018, there were more than 7,000 single-bias incidents reported by law enforcement, according to FBI hate crime statistics. More than 53% of the offenders were white, while 24% were black. Nearly 60% of the incidents involved race, ethnicity and ancestry.

“Racism has long been a way for people to maintain their power,” Savitt said. “Manipulating people’s fears and anxieties is the way you do that. The Trump administration has certainly fanned the flames.”

Trump is trying to court black voters, knowing that he isn’t likely to win them over en masse but could chip into Democratic advantages if he wins more black support in critical swing states. His campaign has stepped up outreach efforts, including to African Americans and Latinos, marking a departure from 2016 when Trump’s volunteer “National Diversity Coalition” struggled to make an impact.

The campaign already has spent more than $1 million on black outreach, including radio, print and online advertising in dozens of markets since the coalition’s launch, the campaign has said.

Only 6% of African American voters went for Trump in the 2016 election, according to a Pew Research Center analysis. Trump’s message to black voters in that campaign was: “What have you got to lose?” Supporters now say they have a record to point to, including the low black unemployment rate and investments in historically black colleges and universities.

A Washington Post-Ipsos poll of African Americans in early January found that 90% disapprove of Trump’s job performance and 83% say Trump is racist.

Laying it all in Trump’s lap is unfair, said Carol Swain, an advisory board member to the national Black Voices for Trump.

“With Trump, he has pushed the American nationalist identity that I think tamps down the kind of conflicts we would have,” said Swain, who is black and has taught political science at Vanderbilt and Princeton universities. “He has pushed patriotism over race and that benefits our country.”

“It’s definitely a white America. A black America. A Hispanic America,” Morris said. “And there’s a very broken line that connects the different Americas. In 2020, we still feel the oppressive issues that Dr. King fought against. He focused on the same things we’re focusing on now.”

Jacob Sklarsky recently read a book about King and the civil rights movement to students in his second-grade Chicago Public Schools class.

“To look at the faces of young black kids who are sometimes hearing about this history for the first time, they are distressed by it,” said Sklarsky, who is white and a member of KAM Isaiah Israel, a Jewish congregation in Chicago.

“They were very relieved at the end because, in a way, it was all worth it,” Sklarsky said. “It gives us some hope, but it’s also very sad that we’re not anywhere near what King dreamed of.”

Left: Martin Luther King Jr. speaks after meeting with President Lyndon B. Johnson to discuss civil rights at the White House in Washington, U.S., December 3, 1963. Photo courtesy of the Library of Congress/Warren K. Leffler/Handout via Reuters.