What happened 101 years ago in the Tulsa Race Massacre

Today marks 101 years since the Tulsa Race Massacre. On May 31 and June 1, 1921, a white mob set fire to the district, once known as “Black Wall Street,” and killed up to 300 Black residents.

President Joe Biden, who last year became the first U.S. president to visit Greenwood since the massacre took place, said in a statement that “great nations do not hide from their histories. We are a great nation, and by reckoning with and remedying the injustices of the past, America will become greater still.”

In 1921, the “proud, rich, black” community in Tulsa suffered a brutal massacre — up to 300 black Tulsans were murdered by white residents, and a thriving neighborhood of that Oklahoma city burned to the ground.

An eye-witness account from black attorney B.C. Franklin recalled that nothing was left “but ashes and burned safes and trunks and the like, where once stood beautiful homes” and businesses.

The 99th anniversary of that bloodshed, now known as the Tulsa Race Massacre, passed a few weeks ago with limited attention amid nationwide protests against police brutality and systemic racism.

“We are living the legacy of the things that have happened in the past.”

Then President Donald Trump announced his plan to hold a rally in that city on a day heavy with historical significance — Friday, June 19, also known as Juneteenth, an unofficial holiday that commemorates the day in 1865 when a Union general read the Emancipation Proclamation in Galveston, Texas, signaling to slaves living in the farthest reaching U.S. state at the time that they were freed. The day has been celebrated by black Americans since the late 1800s.

The planned rally sparked outrage. In response, the Trump administration moved the event back a day to Saturday.

Yet with more attention being drawn to what happened in Tulsa nearly a century ago, scholars and activists are hoping this moment can shine a light on one of the nation’s worst single events of racial violence that has long been buried in our history.

“History is not past; it’s present,” said Hannibal Johnson, attorney and author of several books on Oklahoma’s racial history. “We are living the legacy of the things that have happened in the past. There is a deep and abiding connection that we can’t avoid.”

What happened during the massacre

Leading up to the attacks, Tulsa’s black residents were prosperous, in part because of an oil boom that boosted the city and state’s economies. The Greenwood District, where their businesses were located, became known as “Black Wall Street,” after Booker T. Washington first called it “Negro Wall Street.”

“This community was much more like a black main street. A concentration of doctors and lawyers, movie theaters, pool hall, restaurants, barber shops, beauty salons. But it was in segregated, Jim Crow Tulsa,” said Johnson, who wrote a book titled “Black Wall Street.” 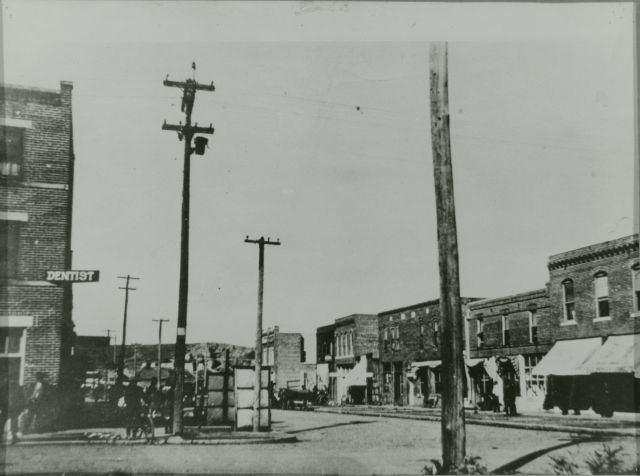 The intersection of Greenwood Avenue and Archer Street in 1917. Tulsa Historical Society & Museum

What made the 35-square-block Greenwood District stand out was also what made it the target of the violent attack: black prosperity was seen as a threat to white supremacy.

“If you are not doing well economically and you see black people with a high level of ownership and wearing nice clothes, you think something is wrong with that picture,” Johnson said, adding that “jealousy” played a role in what happened 99 years ago. 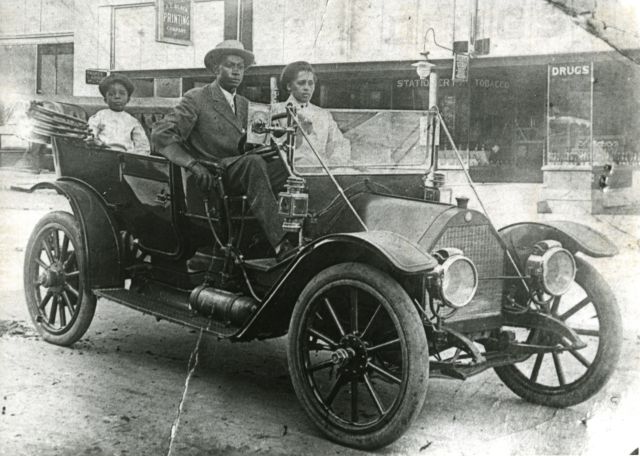 John Wesley Williams and wife, Loula Cotten Williams, and their son, W. D. Williams, sitting in a 1911 Norwalk automobile. John was an engineer for Thompson Ice Cream Company. Loula was a teacher in Fisher. The Williams family owned the Dreamland Theatre, which was destroyed in the 1921 Tulsa Race Massacre. Tulsa Historical Society & Museum

On May 31, 1921, the Tulsa Tribune published a story with the headline “Nab Negro for Attacking Girl in an Elevator.” The newspaper article described the arrest of 19-year-old Dick Rowland, a black man who was accused of assaulting a 17-year-old white elevator operator, Sarah Page.

By some accounts, Rowland had stepped on Page’s foot in the elevator. By others, he grabbed her arm. Some people said he tripped and grabbed her arm to steady himself. The newspaper said Page claimed Rowland attacked her and tore her clothes.

Whatever the reason, Page screamed, and the police were called. Rowland was later arrested on suspicion of sexual assault. The rumors spread quickly, escalating to allegations of rape.

The same day the newspaper article was published, a group of white people gathered at the city’s courthouse, demanding Rowland be handed over to them.

Black residents, who feared Rowland would be lynched because Tulsa had a history of vigilantism, headed to the courthouse to try to intervene. They were about to head home when, “about a block away, somebody fired a shot,” William Danforth Williams, one of the black men at the courthouse, remembered in an interview preserved by the Tulsa Historical Society, and violence ensued. 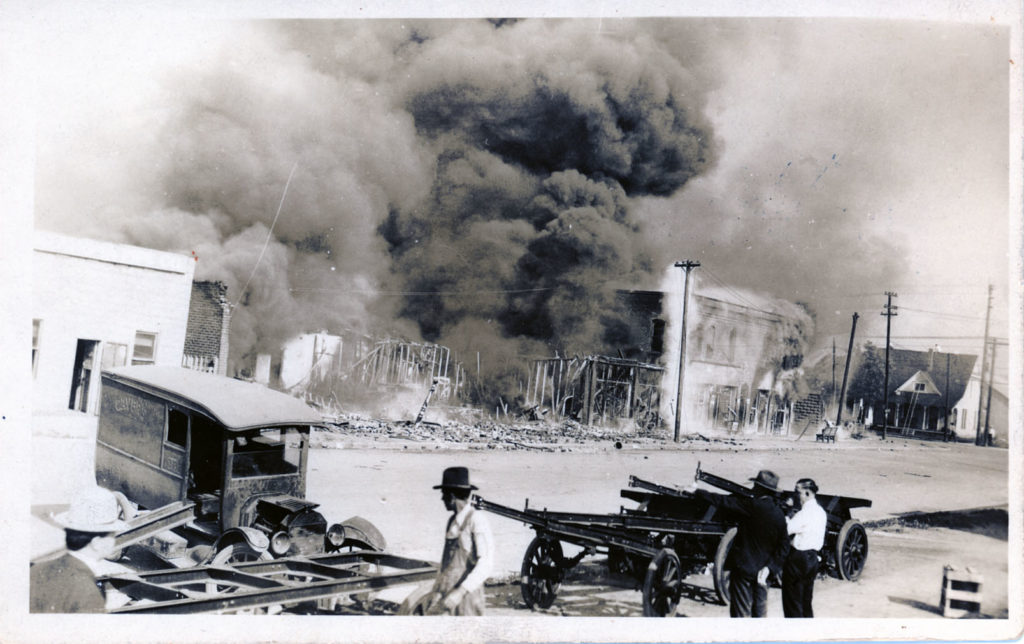 That night and into the next day, black residents were shot in the street. Their homes and shops in the Greenwood District were looted and destroyed. Some accounts indicate white residents used their private airplanes to drop fire bombs onto black properties. 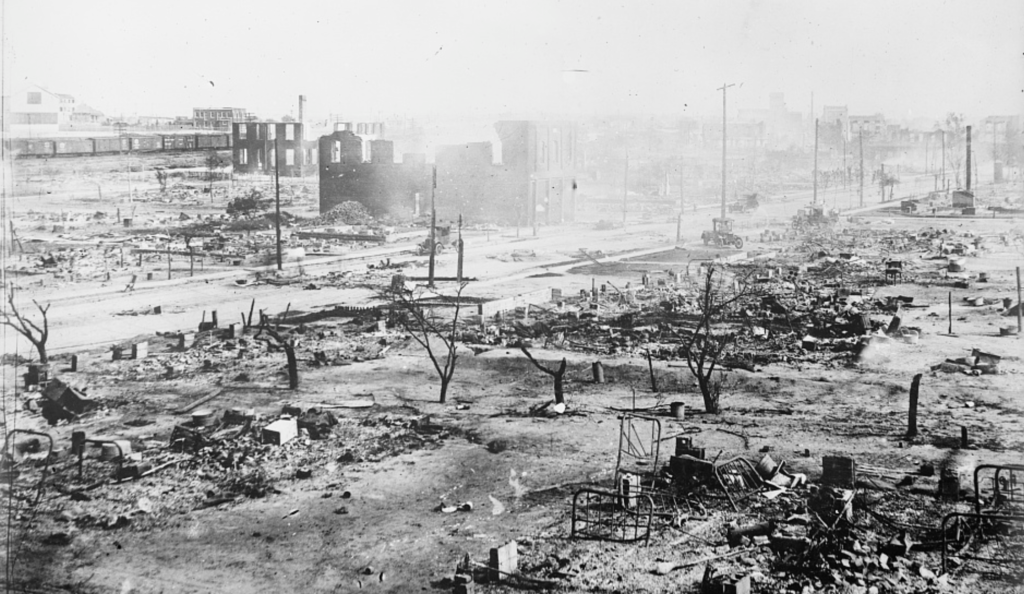 Black residents who weren’t killed were rounded up and forced into the city’s Convention Hall. As more of the city’s black population who had fled during the massacre returned, they were detained as well and taken to a local baseball park and fairgrounds.

State troopers then made their way into town and disarmed the white residents, but nearly all of Greenwood was already destroyed. 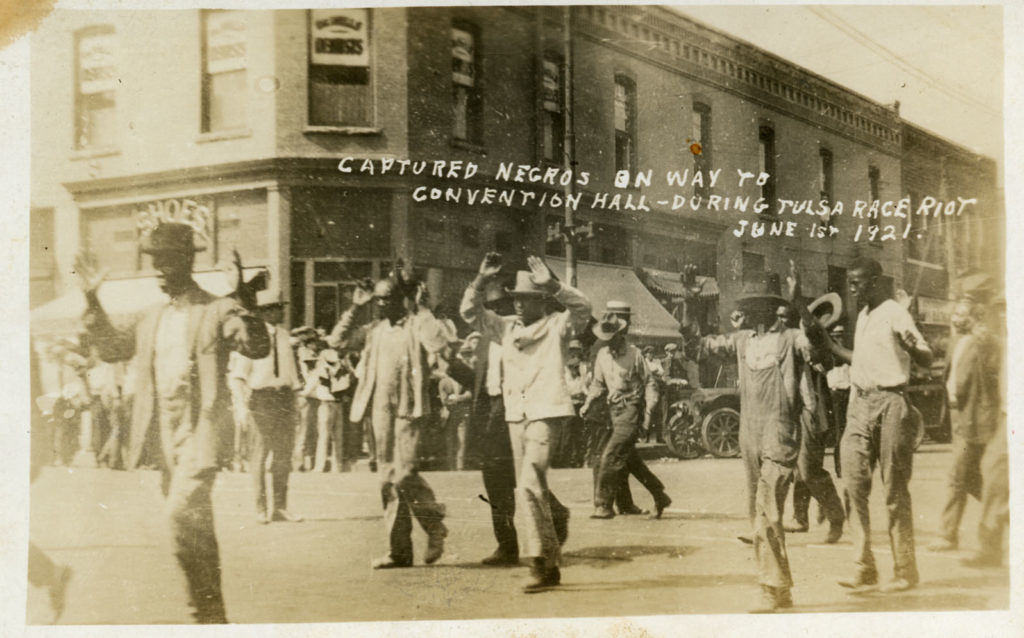 Black Tulsa residents being led to the Convention Hall during the Tulsa Race Massacre. Courtesy of Tulsa Historical Society & Museum

In the coming hours and days, black survivors “managed to win their freedom, by one way or another, from the internment centers,” according to a 2001 report issued by a commission tasked with investigating the massacre.

How the Tulsa Massacre resonates today

Like much of American history involving violence against black Americans, the Tulsa Race Massacre is not common knowledge, especially among white Americans.

“White Tulsa didn’t talk about it because it was a blemish on their history,” said Larry O’Dell, the director of special projects at the Oklahoma Historical Society.

Only a few months ago, the Oklahoma State superintendent announced the state would give teachers a curriculum to incorporate the history of the massacre into their lessons.

Until recently, many black Americans didn’t talk about the horrific event either.

“It was like secret knowledge,” said Phoebe Stubblefield, whose great aunt survived the massacre. “I get the impression that, often, black people — especially when moving around — dealt with horrors by not talking about them.”

Stubblefield first learned of her connection to the Tulsa Race Massacre when her family was talking about their genealogy. Since then, as a forensic anthropologist with the University of Florida, she became part of the Tulsa Race Riot Commission.

The commission was disbanded in 2001 after it issued its final report. But next month, Stubblefield and other researchers are planning to excavate parts of Tulsa where they believe victims of the massacre have been buried.

In Tulsa, present-day protesters are again confronting police violence. In addition to expressing grief and anger over the death of George Floyd, local activists have focused on the killing of local resident Terence Crutcher, who was shot during a traffic stop in 2016. The officer who killed him was acquitted of manslaughter. 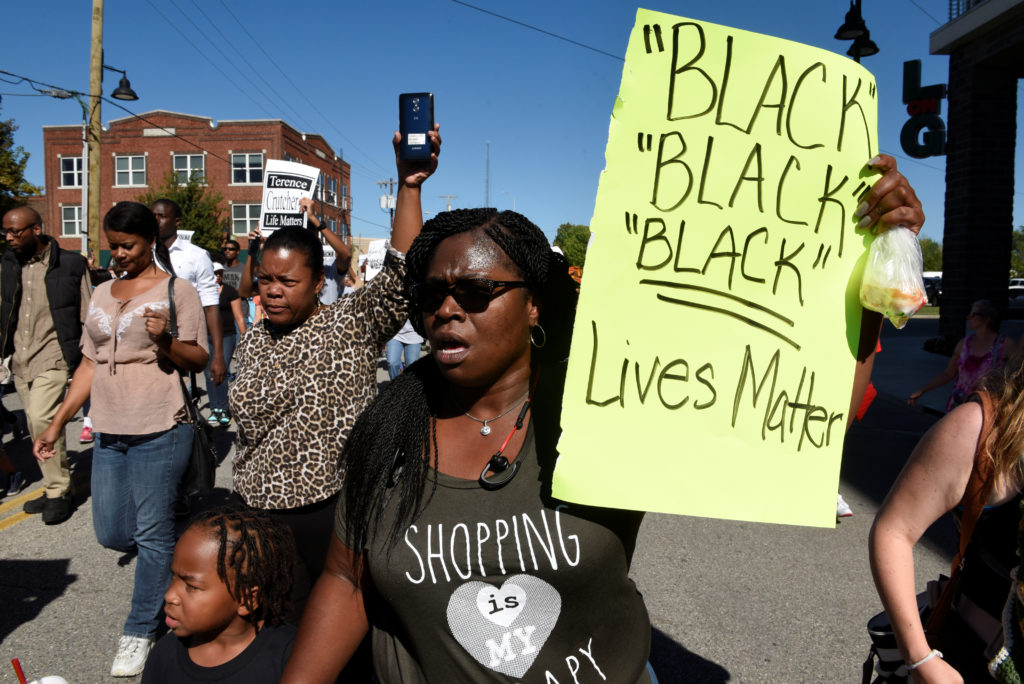 In 2016, protesters marched towards Tulsa City Hall during a peaceful protest honoring Terence Crutcher who was shot and killed by Tulsa police officer Betty Shelby in Tulsa, Oklahoma. Photo by Nick Oxford/Reuters

The suffering black Tulsans faced in 1921 — and feel today — is personal for Kristi Williams, a tour guide in the historic Greenwood District. Her great aunt was in a Greenwood theater when the 1921 violence broke out, and her brother died from an asthma attack while in prison, where she said prison guards did nothing to help him.

“I don’t think feeling guilty is helpful. I want people to feel accountable.”

“We pass that trauma down from generation to generation. And we don’t even realize that we do it,” she said.

As many white Americans are reflecting on their own role in the inequities ingrained in today’s society, Hannibal Johnson said the lessons they should be learning go beyond feeling badly–and should be a catalyst for change and action.

He points out that some white Tulsa residents who employed black residents hid them in their homes to protect them from the white mob. Red Cross and church volunteers also cared for the victims.

And while the Tulsa Race Massacre is a story of trauma and the horrors of racism, it is also a story of resilience. Within a handful of years, the Greenwood District was largely rebuilt, despite being denied any compensation from the city, state or insurance companies for their lost property. 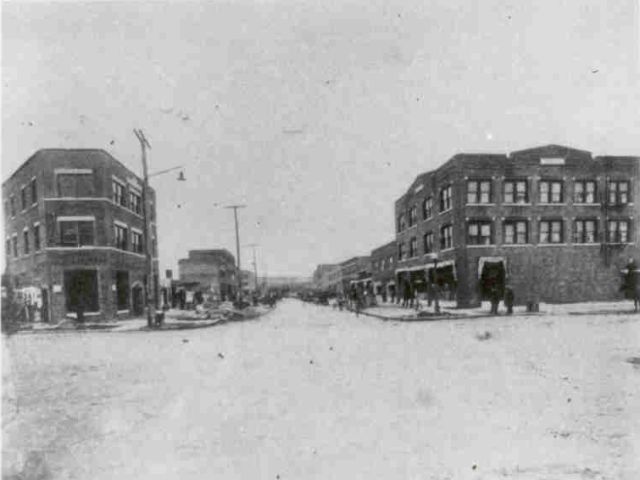 The resilience of black Tulsans is reflected in B.C. Franklin’s account, which refused to end with the devastation.

“And so proud, rich, black Tulsa was destroyed by fire,” he wrote, “that is its buildings and property; but its spirit was neither killed nor daunted.”

Today, Williams said she finds encouragement in her forebears’ determination to restore what was lost.

“If our ancestors did it in the face of Jim Crow, We can do it now. So that’s my goal: to get everyone together to come back and let’s rebuild,” she said.

Dan Cooney contributed to this report.