What we know about the police shooting death of Antwon Rose Jr.

Community members in East Pittsburgh, Pennsylvania, continue to protest the June 19 police shooting of an unarmed black teen whose fatal encounter with an officer was captured on video by a bystander’s cell phone.

The black teen was the passenger of a car suspected by police to be involved with a shooting minutes earlier that day, the Allegheny County Police Department said in a statement, adding that Rose was unarmed when an officer fatally shot him.

A private funeral for Rose is being held Monday. On Sunday, hundreds of mourners gathered for Rose’s wake with some wearing homemade shirts reading, “Justice for Antwon,” local news outlet TribLIVE reported.

Seeing a lot of these homemade shirts this evening outside the Homestead funeral home where hundreds are cycling through to pay their respects. This photo shows Taivion Boynes, 19, a friend of Antwon’s. “Three shots to the back, how you justify that?” pic.twitter.com/9h6wEneeFW

The Allegheny County Medical Examiner’s Office said Rose’s death is being ruled a homicide and that the teen died of a gunshot wound. More than a week after the shooting, the officer was arrested and charged with criminal homicide in Rose’s death.

“[The officer] was not acting to prevent death or serious bodily injury,” Allegheny County district attorney Stephen Zappala told reporters in a news conference this week. “It’s my position that he’s not entitled to a justification charge to a jury as a defense.”

Here’s what we know about what happened and what police and the community will do next.

Allegheny County police received multiple 911 calls of a shooting around 8:20 p.m. ET Tuesday, the department said in its initial statement on Facebook. Responding officers found a wounded 22-year-old male who was subsequently transported to a nearby hospital for treatment.

Witnesses who reported the incident provided a description of a car that was seen fleeing the scene of the shooting: a silver Chevrolet Cruze that also had “ballistics damage to the rear window.” About 13 minutes later, an East Pittsburgh officer flagged a vehicle that matched the description of the car and stopped it.

The officer handcuffed the driver, while two passengers who were also in the vehicle ran away, police said. That’s when an officer shot and killed the teen who was later identified as Rose. He was declared dead at a local hospital. On Friday, Allegheny County District Attorney Stephen Zappala confirmed that police found an empty gun clip on Rose.

Press conference at the Allegheny County police headquarters about an officer that shot a 17-year-old boy last night in East Pittsburgh.Read the story: http://www.post-gazette.com/news/crime-courts/2018/06/19/North-Braddock-East-Pittsburgh-officer-involved-shooting/stories/201806190176

In a news conference the following day, Allegheny County Police Superintendent Coleman McDonough confirmed that Rose was unarmed when he “bolted” from the scene. Two firearms were recovered from the floor of the car, McDonough said.

“I’m very confident that that was the vehicle involved in the shooting,” McDonough told reporters.

The superintendent also said the officers involved were not wearing body cameras, nor was the vehicle equipped with any cameras. The officer who fatally shot Rose — identified as Michael Rosfeld — has been placed on administrative leave while the shooting is being investigated, McDonough said. He would not answer other questions about the officer, including on Rosfeld’s race.

“I understand people believe I’m just a statistic. I say to them I’m different,” Rose once wrote in a poem.

McDonough also said the officer could have been justified in shooting at a fleeing suspect if he posed an imminent threat to authorities or others.

East Pittsburgh Mayor Louis Payne said Rosfeld, who has eight years of police experience at other departments, was formally sworn in hours before the shooting, the Pittsburgh Post-Gazette reported.

When asked about the “groundswell” of outrage from the community over the police shooting, McDonough said, “I understand in today’s atmosphere anytime a young man is killed there’s cause for outrage in some areas … however, I would urge people to give us time to conduct an objective investigation, to gather facts.”

What can you see in the bystander video?

A bystander filmed the deadly encounter on video and posted it to Facebook. 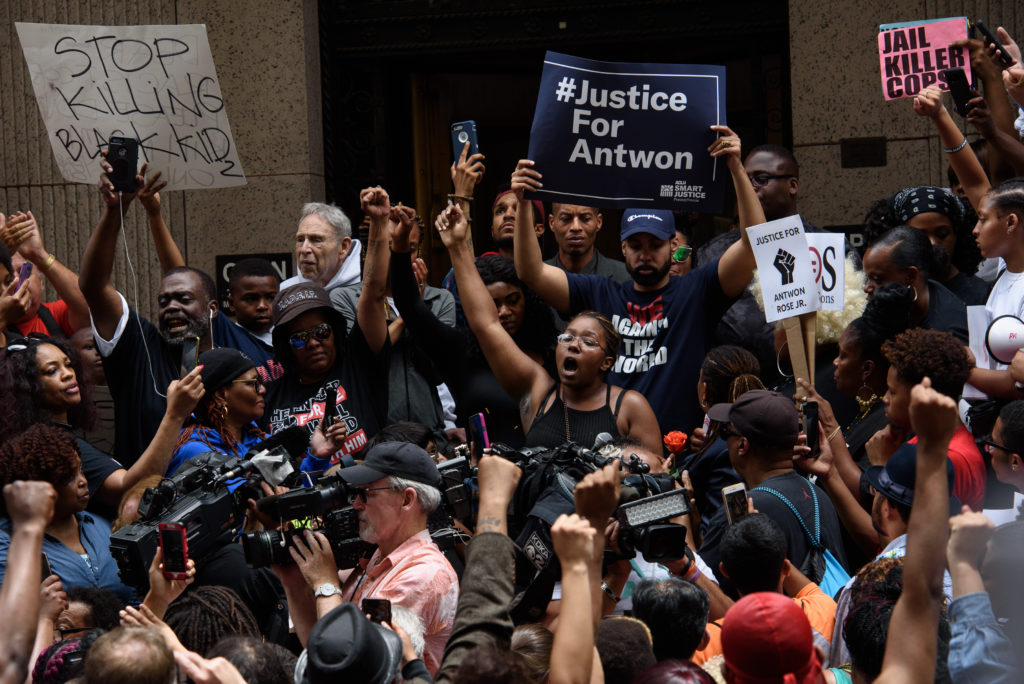 More than 200 people gathered for a rally to protest the fatal shooting of an unarmed black teen at the Allegheny County Courthouse on June 21, 2018 in Pittsburgh, Pennsylvania. Photo by Justin Merriman/Getty Images

In the 17-second video, a second police vehicle arrives at the scene as two people are seen running away from the parked police vehicle in the middle of the street. Then, three gunshots ring out.

“Why are they shooting at him?” the person recording the shooting is heard saying. “All they did was run, and they’re shooting at them.”

Upon seeing the video of the shooting, Antwon’s aunt Mica Tinsley is quoted by the Post-Gazette as saying, “They’re not even saying stop … They just started shooting, and he fell. He didn’t make it far.”

“Any loss of life is tragic, and especially the loss of life of a child. This is a devastating situation and I am saddened for Antwon Rose and his family,” Pittsburgh Mayor William Peduto said in a statement.

The shooting death of Rose comes amid continuing national scrutiny of police use of force, particularly against black Americans. Protests swelled last week with hundreds of peaceful protesters marching on a major interstate Thursday, shouting “No justice! No peace!” and carrying “Justice4Antwon” signs. Protests are expected to continue.

Protesters lying down on Parkway near Wilkinsburg exit pic.twitter.com/2NXJejhkWo

Pennsylvania state and Allegheny County police, among other law enforcement agencies, are investigating the shooting. The district attorney has yet to decide on whether criminal charges would be brought against the officer.

Rose’s parents, speaking with ABC, said they hope the ongoing investigation is going to be fair. Rose’s mother, Michelle Kenney, told ABC on Sunday that the officer shot her son “in cold blood.”

“Every time you turn on the TV, there’s a young African-American male shot by the police,” she said through tears. “And you say, ‘I feel sorry for them.’ But ‘them’ is me. But ‘them’ is him.”

Rose’s family released a poem Thursday, written by Rose two years ago, via the Woodland Hills School District, where he attended school. Titled “I AM NOT WHAT YOU THINK!,” Rose wrote, “I see mothers bury their sons. I want my mom to never feel that pain.” The poem was created for his 10th grade honors English class, CNN reported. Rose’s poem was read aloud amid protests over his death.

“I understand people believe I’m just a statistic. I say to them I’m different,” Rose wrote.

Left: A woman holds a rose and a sign for Antwon Rose as she joins more than 200 people gathered for a rally to protest the fatal shooting of Rose at the Allegheny County Courthouse on June 21, 2018 in Pittsburgh, Pennsylvania. Photo by Justin Merriman/Getty Images