What you need to know about Trump’s novel coronavirus response

On the same day the World Health Organization declared novel coronavirus a pandemic, President Donald Trump and White House officials scrambled to lay out how the federal government would deal with the growing crisis.

There are have been more than 1,000 cases of novel coronavirus in the United States and at least 30 people have died after contracting COVID-19, the illness it causes. Health officials said they expect the numbers to continue to grow.

As the world deals with the outbreak, Italy has now become the center of concern for the novel coronavirus. There are now 12,462 infections and 827 deaths in the country. The virus case count in Italy is second only to China — where more than 80,000 cases have been confirmed since the outbreak began there in December.

On Wednesday night, the president addressed his plans to combat COVID-19 in an Oval Office address. Here’s a closer look at what we know about Trump’s announcement.

What exactly will Trump’s announcement do?

Trump also mentioned restrictions on goods, but later tweeted that his plan “stops people not goods.”

How will the travel restrictions work?

There are some exceptions …

Another thing to note: The president’s action does not ban U.S. citizens from traveling to Europe. But, the State Department on Wednesday issued an advisory urging U.S. citizens to “reconsider travel abroad due to the global impact of COVID-19.”

Trump tweeted after his address that the ban “stops people not goods” and that “trade will in no way be affected.”

Have these kinds of travel restrictions been put in place before?

Restrictions based on outbreaks and illness concerns have happened several times throughout history. Most recently, during the 2014 ebola epidemic, some lawmakers proposed restricting travel into the U.S. from West Africa, where the outbreak originated. However, the Obama administration ultimately deployed a “civilian-led” response focused on sending humanitarian aid to West Africa and providing health screenings for all passengers flying into the U.S. to ensure they were not exhibiting any symptoms.

What did the president say about testing for the coronavirus?

Trump said that federal officials were “moving very quickly” and that “testing and testing capabilities are expanding rapidly.” But the president did not offer details on how the administration was making testing more available — a point of concern for many health officials who have been trying to pinpoint where and how the virus is spreading. There may already be cases spreading in communities across the country that health officials are not monitoring because there aren’t enough tests to detect them.

The CDC has listed 79 state and local testing labs that are using verified coronavirus tests. But it’s not always clear how quickly results are being made available once testing is done. Some patients have said they’ve waited several days after being tested to learn that they are positive for the coronavirus.

House Speaker Nancy Pelosi and Senator Minority Leader Chuck Schumer issued a joint statement after the president’s address criticizing it. “We have a public health crisis in this country and the best way to help keep the American people safe and ensure their economic security is for the president to focus on fighting the spread of the coronavirus itself,” they said. “Alarmingly, the president did not say how the administration will address the lack of coronavirus testing kits throughout the United States.”

What didn’t the president mention?

The president did not mention paid leave for workers — including hourly wage earners — who have already or may have to in the future take time off of work because of the impact of the virus. In the past, Trump has said he wants to provide financial relief to workers who are not paid if they have to stay home because of quarantines. However, Wednesday night he did not mention unemployment benefits or other specific measures for those employees.

He also did not mention providing nutrition assistance for children who rely on schools for meals but who may have to go without those meals if they are forced to stay home because of the virus. Democrats, in their own proposals, have said they want to provide assistance for such low income families and their children.

What emergency action will the president likely use to get funds to combat the coronavirus?

On Wednesday, Trump said: “To ensure that working Americans impacted by the virus can stay home without fear of financial hardship, I will soon be taking emergency action, which is unprecedented, to provide financial relief.”

Senior White House officials say the president will likely declare a national emergency under the Stafford Disaster Relief and Emergency Assistance Act. Under that act, the president would likely have access to up to $42.6 billion in disaster aid.

Senior Democratic aides say the Stafford Act would allow the president to administer funds through the Federal Emergency Management Agency (FEMA) through an emergency declaration. That money could be used to do things like provide tents to temporarily shelter people impacted by the virus, fund state medical responses, provide disaster unemployment insurance and pay overtime to workers involved in state emergency responses.

When has this kind of power been used before?

Senior Demcratic aides said former President Bill Clinton in 2000 declared an emergency in areas of New York state affected by the West Nile virus. Back then, Clinton authorized FEMA to provide about $5 million to reimburse governments for efforts aimed at combating the mosquito-borne virus. What Trump is likely proposing would be spending billions of dollars — not millions.

How does this compare to funding for previous pandemics? 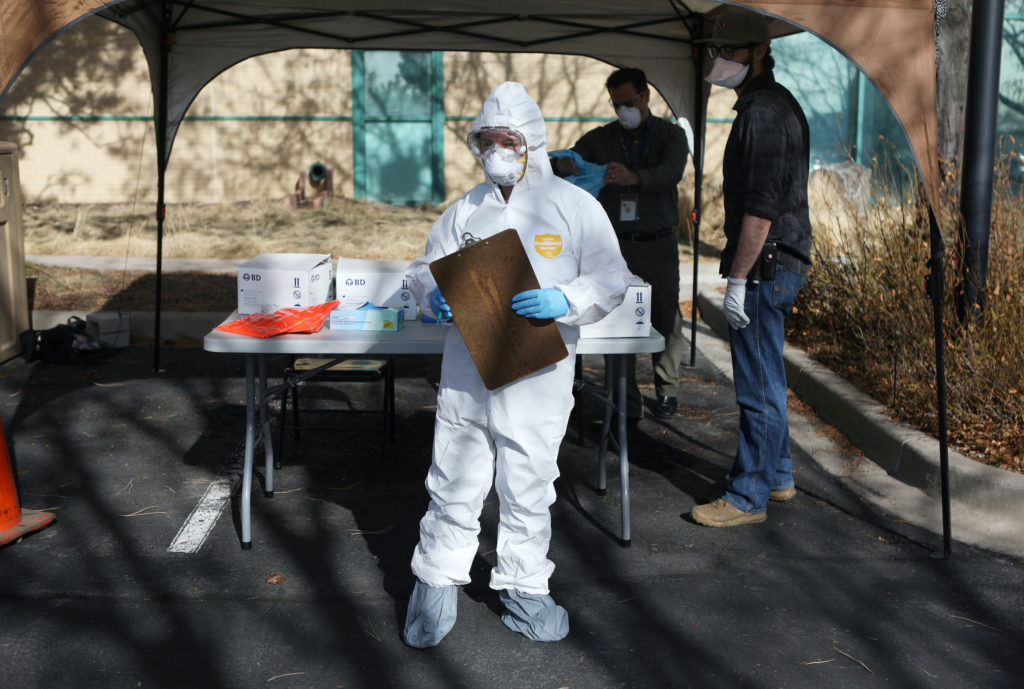 It’s hard to compare funding for different outbreaks, because they have different needs.

But senior Democratic aides on Capitol Hill stressed that the United States has not had to combat a pandemic like the coronavirus in modern history.

Here’s how previous outbreaks were funded.

H1N1 (2009-2010)
The Centers for Disease Control and Prevention administered $1.4 billion through the Public Health Emergency Response (PHER) grant to upgrade state and local preparedness and response capacities. Congress also allocated $7.65 billion for a vaccine and other measures to fight H1N1.

Ebola (2014)
The CDC got around $165 million to support state and local communities efforts to respond to Ebola, and provided $145 million in supplemental funding to state and local government preparedness plans. Congress approved an emergency appropriation of $5.4 billion in it’s 2015 budget to help combat Ebola.

Zika (2016)
The CDC awarded around $184 million in funding to states and local communities to help fight Zika. The allocations were part of $350 million in funding given to the CDC under the Zika Response and Preparedness Appropriations Act of 2016. Congress later allocated $1.1 billion to fight the Zika virus.

What else is the government doing?

Trump has already signed an $8.3 billion funding bill, much of which will be at the disposal of HHS and state and local governments. This money will go to a number of needs, including vaccine and therapeutic development, more first responder supplies, investigating outbreak and helping underserved communities.

Pelosi and Schumer issued a joint statement late Friday that said they were urging Republicans in the House and Senate to pass the Democrats’ proposal dubbed the “Families First Coronavirus Response Act.” The lawmakers said the bill will include free coronavirus testing, paid emergency leave for workers, food security assistance, resources to help states with Medicaid costs, and strengthened unemployment Insurance.

On Wednesday, the House introduced its own coronavirus spending plan dubbed the “Families First Coronavirus Response Act.” Lawmakers could vote on that bill as early as Thursday.

The president is stressing that he wants to see a payroll tax cut passed in Congress, though Democrats have criticized the idea as helping wealthy Americans and businesses instead of middle class Americans.

In the meantime, Trump has also suspended his own travel, cancelling trips to Colorado and Nevada this week “out of an abundance of caution.”

Tell us: How is the coronavirus affecting you, your family and your community?

This article has been updated to reflect that Trump’s initial statement about co-payments was incorrect. PBS NewsHour’s Yasmeen Alamiri reported for this story.

Left: U.S. President Donald Trump speaks about the U.S response to the COVID-19 coronavirus pandemic during an address to the nation from the Oval Office of the White House in Washington, U.S., March 11, 2020. Doug Mills/Pool via REUTERS