Your guide to understanding COVID-19

The new coronavirus, known as COVID-19, is now officially a global pandemic. It has sickened more than 121,000 people and killed an additional 4,300 people worldwide, as public health officials scramble to learn more about the virus’ severity, and how to slow the spread.

Some days, the flurry of questions about the outbreak seems to outpace new infections. So here’s what we know about the latest cases, how it spreads, the questions public health experts are still asking and how to protect yourself.

How did novel coronavirus start?

Novel coronavirus belongs to the same family of viruses as the common cold and SARS (severe acute respiratory syndrome). Though the new virus’ geographic origin has been pinpointed to Wuhan, China, it’s unclear which animal first carried it, or how it was transmitted from animals to humans.

Using WHO data compiled by Johns Hopkins University, the PBS NewsHour tracked the progression of the respiratory illness in an animated map, zooming out from a single Chinese province to fill in countries around the world as cases mount.

What are the symptoms? How does it spread?

From the time you are exposed, symptoms could appear within two to 14 days. They include:

If you develop symptoms, the CDC recommends that you contact your medical care provider immediately.

If you are sick, you should practice social distancing for the two-week period that has been determined to be the disease’s incubation period. Stay in your home in a room away from people who live with you, and if possible, use a separate bathroom, CDC says.

Limited data so far suggests that people who are most at risk of getting really sick or even dying from COVID-19 are older or have pre-existing health conditions, including heart disease, lung disease, diabetes and other chronic illnesses.

Health officials are asking people to cover their noses and mouths when they sneeze or cough, stifling the spray of airborne respiratory droplets — i.e. saliva and mucus — that might spread the virus to others. Avoid touching your face and wash your hands thoroughly with soap and warm water for at least 20 seconds (or the time it takes to sing “Happy Birthday” twice).

On March 11, President Donald Trump announced that travel from Europe to the U.S. would be suspended for 30 days, though the ban would not include the United Kingdom. The U.S. previously urged Americans to avoid nonessential travel to China, along with Italy, Iran and South Korea, where the disease has spread rapidly in recent weeks. 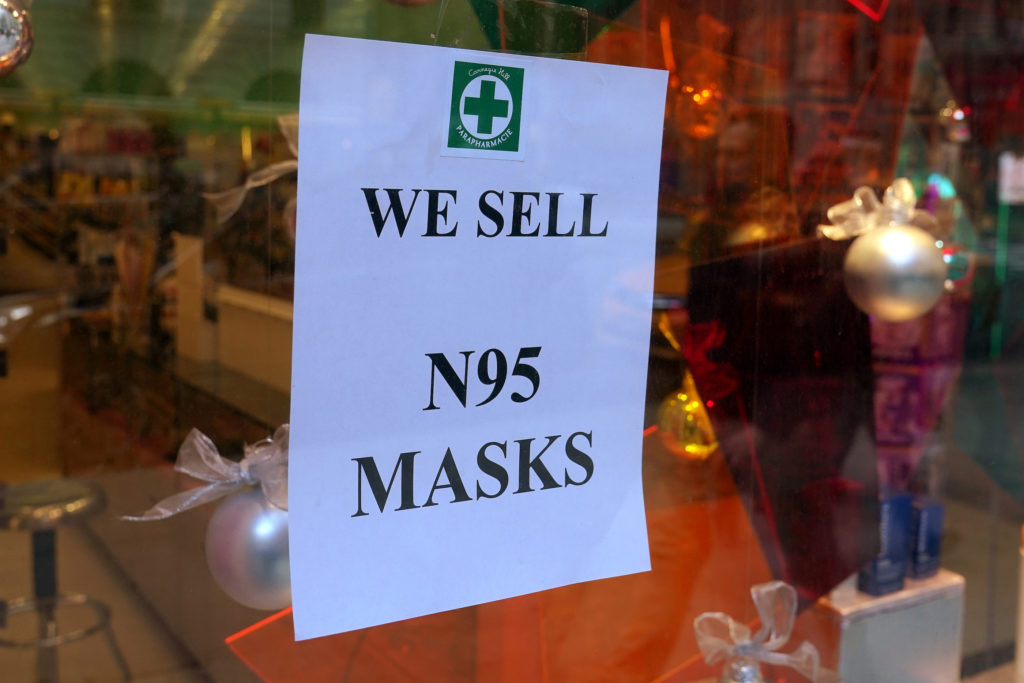 A pharmacy displays a sign for N95 face masks in advance of the potential coronavirus outbreak in the Manhattan borough of New York City, New York, U.S., February 27, 2020. REUTERS/Carlo Allegri

Health officials do not recommend that Americans wear face masks to protect themselves from this virus. Why? They are not needed for the general public right now, and wearing one when you don’t need to depletes the supply for health care workers on the front lines of this illness.

Also, masks are often worn incorrectly. Those who do wear them shouldn’t leave their nose or mouth exposed at any time, and should never reuse a mask.

Are tests available in the U.S.? 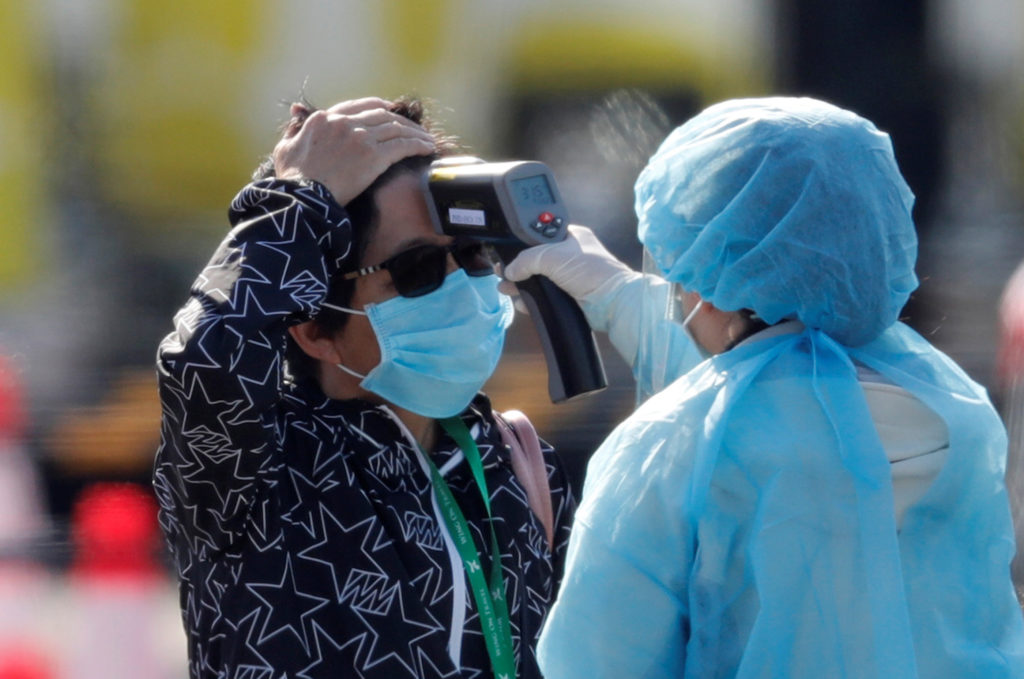 A passenger wearing a mask takes her temperature after leaving the coronavirus-hit cruise ship Diamond Princess at Daikoku Pier Cruise Terminal in Yokohama, south of Tokyo on Feb. 21, 2020. Photo by REUTERS/Kim Kyung-Hoon

Public health officials fear that many cases are already circulating the country but are going undetected due to a lack of confirmation.

The Centers for Disease Control and Prevention has developed and dispatched diagnostic test kits with the goal of distributing them to all 50 states to test respiratory and blood samples more quickly. Initially, flawed test kits produced inaccurate results. After re-evaluating those kits, 12 states are able to conduct tests for COVID-19, with all positive tests confirmed at CDC laboratories in Atlanta.

The Trump administration has said that any American should be able to get tested if a doctor suspects COVID-19. That was a change from the initial guidance, that said only people showing symptoms could get tested. But it’s not clear that there are enough tests yet to meet demand.

The Food and Drug Administration has also expanded commercially available test kits, and promised to make 1 million kits available this week to increase the nation’s capacity to test and detect more people.

Researchers at the National Institutes of Health and around the world also are developing medications and vaccines to combat the virus with several drugs, including existing pharmaceuticals used to treat other illnesses, in various phases of development. But U.S. officials have said that an effective vaccine is still at least a year away.

How does coronavirus compare to the flu? 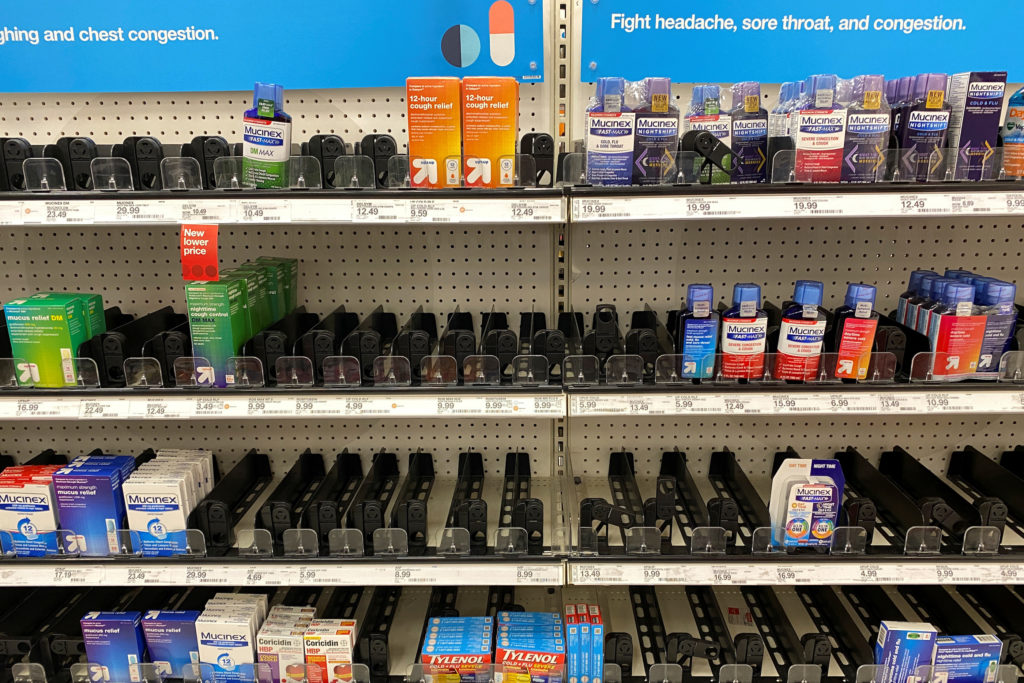 As more data has become available in the months after the virus emerged, the WHO suggested COVID-19 could have a mortality rate of 3.4 percent across all global cases — far greater than seasonal flu. That rate is much smaller, hovering around 0.1 percent, according to Dr. Anthony Fauci, who directs the National Institute for Allergy and Infectious Diseases.

READ MORE: Why it’s too early to compare COVID-19 with the flu

This flu season, influenza has led to 18,000 deaths, 310,000 hospitalizations and at least 32 million people getting sick, according to the latest CDC estimates.

What do these numbers mean? The flu sickens way more people in the U.S. than COVID-19 — so far. But because this novel coronavirus appears to have a higher mortality rate, based on current data, those fatality numbers are likely to go up as more people are infected without any vaccine or medications designed to stop it.

One strain, influenza B has already peaked and appears to be tapering off. But influenza A may be on the rise, said epidemiologist William Schaffner, medical director for the National Foundation for Infectious Diseases. He advised Americans to get their flu shot and take precautions.

“Don’t linger, get vaccinated this afternoon,” he said. “There’s flu in every state.”

Unlike the flu, COVID-19 does not have a vaccine or medications designed specifically to prevent and treat it, which means public health officials are racing to figure out how to protect vulnerable populations, like older people or those with pre-existing conditions. 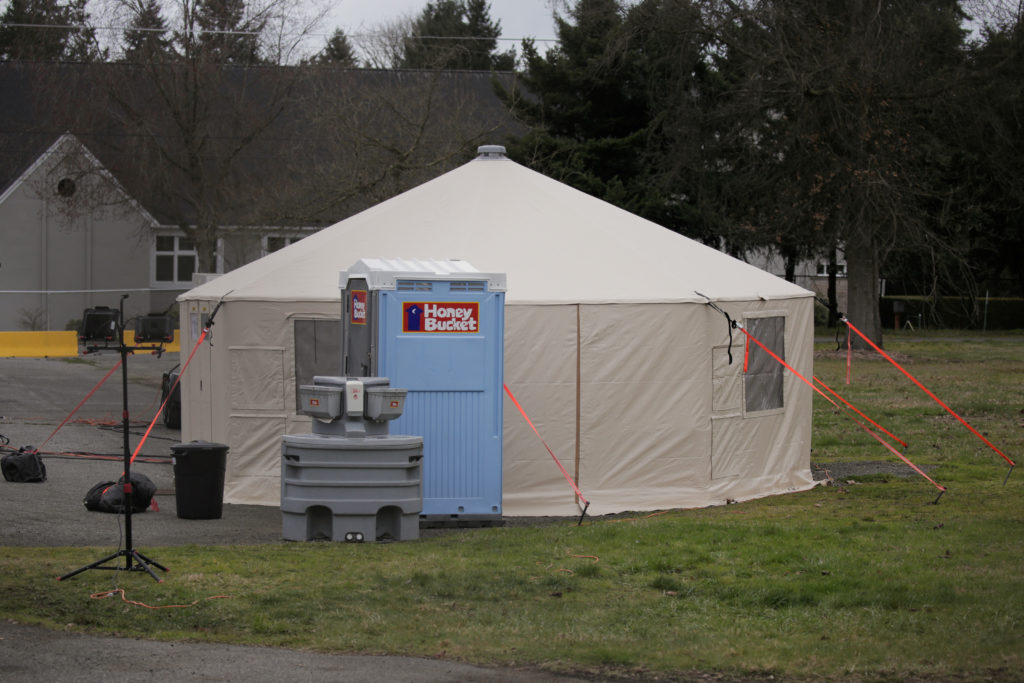 Some estimates suggest that China effectively placed 150 million people under quarantine by shutting down transportation for more than a dozen cities.

The outbreak emerged amid Lunar New Year celebrations, “an occasion for extremely widespread travel,” said William Schaffner, an epidemiologist and medical director for the National Foundation of Infectious Diseases. “Celebratory occasions where people get together with friends and family — that’s an ideal condition for transmitting a respiratory virus.”

Since then, significant public health concerns have led Saudi Arabia to ban foreign pilgrims during Hajj, Facebook to cancel its in-person F8 industry conference in San Jose, California, and Japan and Italy to close schools nationwide.

On March 9, Italy’s Prime Minister Giuseppe Conte announced further restrictions — that its regional lockdown, focused on the northern part of the country, would be expanded to the entire nation the next day. Italians must prove one of a limited list of reasons in order to leave the immediate area where they live.

But there’s debate among public health experts about the wisdom of that strategy, said Kasisomayajula Viswanath, a scientist and professor of health communication at the Harvard T.H. Chan School of Public Health.

While similar steps were taken during outbreaks of Ebola and H1N1 (swine flu), Viswanath said China’s “scale of quarantine this time around is unprecedented.”

Outbreaks outside of China show the differences between how democratic and authoritarian governments choose to handle the virus, said Minxin Pei, an expert on Chinese governance and professor of government at Claremont-McKenna College. In Korea and Italy, he said officials have done “a better job informing the public and educating them.”

“Officials in democracies are more accountable to the public, unlike those in China, who are accountable only to their superiors,” he said.

What do public health experts still want to know? 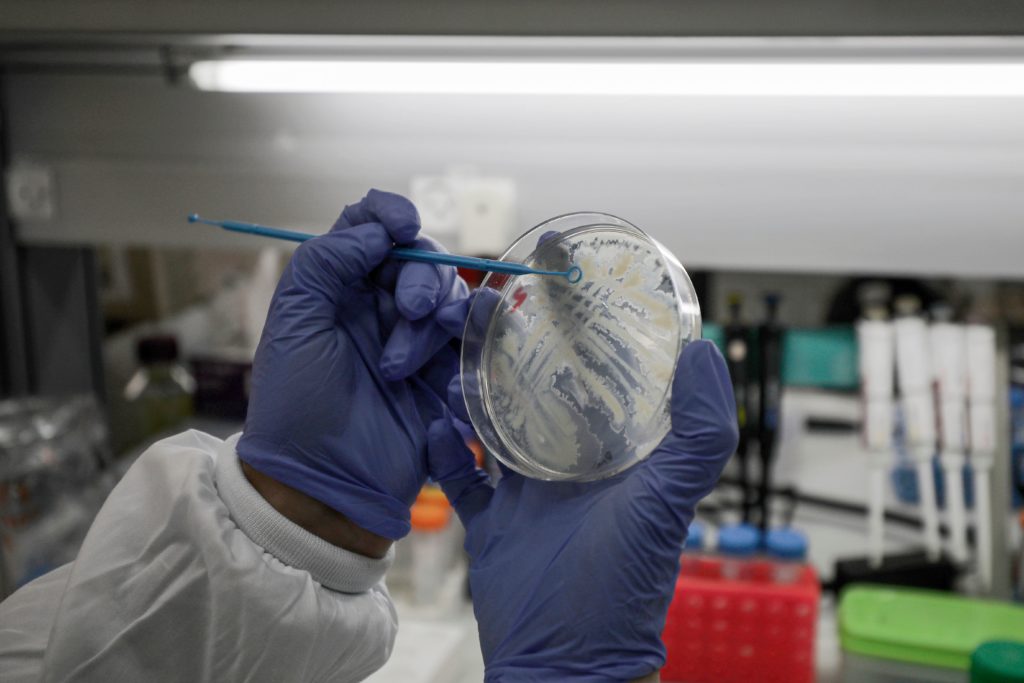 An Israeli scientist works at a laboratory at the MIGAL Research Institute in Kiryat Shmona in the upper Galilee in northern Israel on March 1, 2020 where efforts are underway to produce a vaccine against the COVID-19 coronavirus adapted from another for infectious bronchitis virus. Photo by JALAA MAREY/AFP via Getty Images

After the 2003 SARS outbreak that sickened more than 8,000 people and led to 774 deaths worldwide, China established a surveillance system to monitor pneumonia outbreaks, which are a red flag for the potential rise of a viral infection.

Epidemiologists have credited China with quickly identifying the pathogen responsible for novel coronavirus, sequencing its genome in weeks and sharing that information with scientists around the world. That helped Japan and Thailand identify its cases, the CDC said.

But public health officials have also criticized China for not being more forthcoming with case details.

“The sooner China publishes that information, the safer China will be, and the safer the world will be,” Dr. Tom Frieden, former CDC director and CEO of Resolve to Save Lives, an initiative of the nonprofit Vital Strategies, said during the early days of the virus.

In the weeks that followed, China eventually allowed WHO experts into the country to assess what had been done and what else was needed. The country also changed how it counted cases, moving from taking and testing respiratory and blood samples to conducting chest scans.

By late February, the number of new confirmed cases in China began to plateau and then taper, as new countries began to see rapid increases, though roughly 90 percent of the world’s cases still reside in the country.

As time goes on, risk factors are coming into focus. But there are still questions about how the virus spreads, and unfortunately, more data is a symptom of more cases.

Left: Here’s what we know about the latest cases of COVID-19, how this novel coronavirus spreads, the questions public health experts are still asking and how to protect yourself. Photo by JOHAN ORDONEZ/AFP via Getty Images