Editor’s Note: Apple unveiled a new, bigger iPhone this week, as well as the Apple Watch and a new payment system, Apple Pay.

But that’s not all they did. Hult Business School marketing professor and consultant Wahyd Vannoni, who writes for the Italian website Linkiesta, is concerned about what he found in his iTunes library.

Vannoni has previously written for Making Sen$e about the power of brands and J.K. Rowling. He returns now to explain why Apple’s latest move isn’t making it such a beautiful day.

I can’t believe the news today, when I read that Apple had uploaded an album by U2 onto the libraries of more than “500 million iTunes customers worldwide.” I was shocked and incredulous. So I looked at my iPhone, checked the album list and there was “Songs of Innocence” by U2. I can’t close my eyes and make it go away. It’s the kind of gift that you would normally get on New Year’s Day. 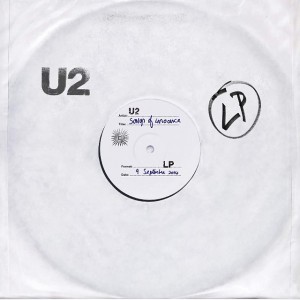 The design of the icon looks like a cheap blank CD with handwritten scrawl spelling out the album title. You can also see “LP” (short for long-playing) written as if with a black marker on a CD sleeve. These two elements suggest spontaneity and curation. It reminds music fans of the late ‘80s and early ‘90s when they used to make compilations of songs and burn them onto mixed tapes and CDs. As if to answer music-listeners saying, I still haven’t found what I’m looking for, Apple responds, here my friend, is a genuine, definitive collection of songs.

But what hubris on the part of Apple to surreptitiously break into our album collection and, in mysterious ways, insert an album while we sleep like a baby! Imagine if 500 million people all of the sudden found a new book in their libraries in their homes. At first, it might look like the sweetest thing Apple could do. But any feeling of joyful surprise would give way to vertigo — that uncomfortable realization that someone unlocked our doors, walked through our houses, found the bookshelf and carefully placed a volume right where it was supposed to go.

What great irony that this particular exercise in power projection was committed with an album titled “Innocence.” It is said that power corrupts, but power may also blind those who exercise it as well as those upon whom power is exercised — in this case, the public-consumer. There are a few people at Apple, just like at Amazon or Netflix, who, at the switch of a metaphorical button, can influence hundreds of millions of customers. (Amazon for instance, has been known to delete eBooks from our Kindles.)

When brands have power, they expect the public to be oblivious to irony and contradiction. “Innocence” is the title, and its synonyms include “honest,” “genuine,” “honorable” or “trustworthy.” But with public-consumers in awe, they’ll overlook this in a perpetual moment of surrender. What matters is that when the product comes from a well-known brand, in this case Apple, exercising power may, in many cases, involve breaking apart any notion of common sense (the tile is “Innocence” and innocent people do not break into other people’s possessions).

We, the public, bear our share of responsibility. Through our actions, through our purchases, we keep telling brands, “I can’t live, with or without you.”

Left: Marketing professor Wahyd Vannoni is a little unnerved by the appearance of U2's new album -- unsolicited -- in his iTunes library. Screenshot of Apple website.

Wahyd Vannoni is the founder of Mediacodex Ltd, a London-based communications consultancy. He also teaches marketing and marketing related subjects at Hult Business School in London. He holds a MBA from Boston University.