Why are more and more Americans buying fake Christmas trees?

Once last-minute shoppers picked out their Christmas trees this weekend, vendors started to tally how many evergreens they sold this year. Projections suggest it will be a smaller number than previous years, as artificial trees continue to cut into the market for real ones.

Balsam Hill, a California-based company, sells tens of thousands of artificial Christmas trees in the U.S. each year. The company’s CEO Mac Harman attributes the gradual uptick in artificial tree purchases to a number of factors. Americans are leaving their trees up for a longer period than they used to, and companies are manufacturing more life-like trees that appeal to more customers.

Most of all, he said artificial trees are less hassle: “They’re more convenient,” Harman said.

People who prefer artificial trees said they are better for allergies, are more convenient and are less likely to get knocked over by cats.

Many artificial Christmas trees now even come pre-lit, so customers do not have to deal with untangling lights and packing them back up at the end of the season.

Preferences for an artificial or real Christmas tree divided NewsHour readers who responded to a callout on social media.

“Artificial ones are convenient, easy, inexpensive in the long run, and last pretty much forever. But they just don’t have the appeal of a real tree,” Rich Ratz wrote on Facebook.

People who prefer artificial trees said they are better for allergies, are more convenient and are less likely to get knocked over by cats (more than one person mentioned that last reason). 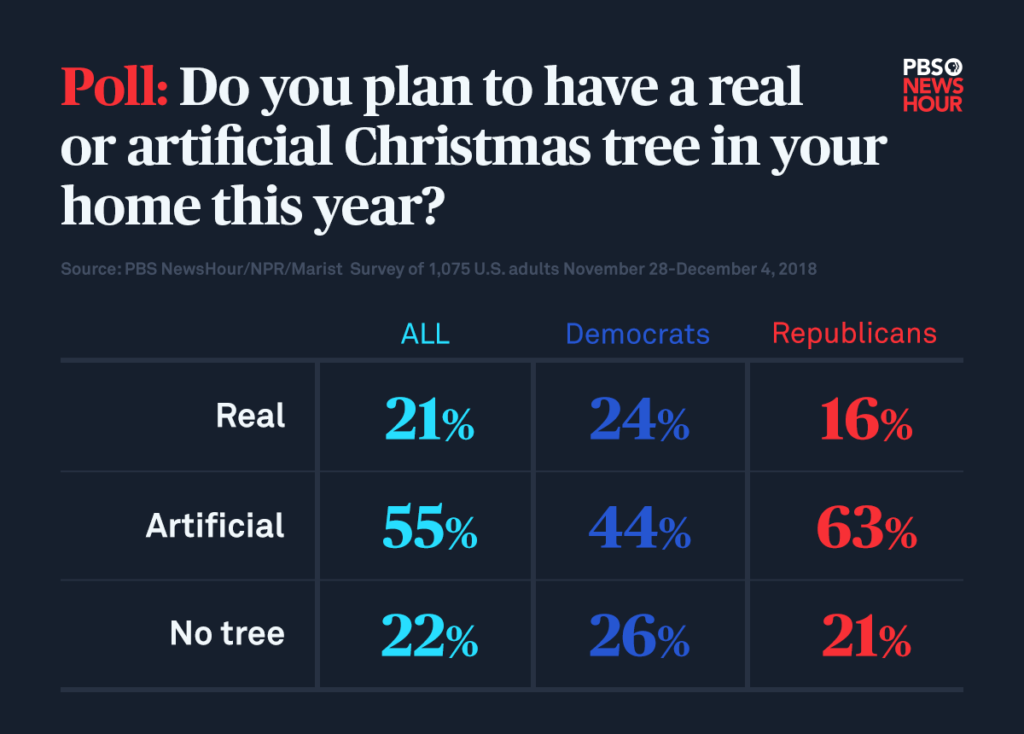 “We finally bought an artificial tree this year,” wrote Vivian Ewing. “Last year, my daughter bought what I think was a pine tree because it was reasonably priced and had a nice smell. Both she and my grandson had the WORST ASTHMA ATTACKS EVER!”

As with so many debates these days, this too can be seen through a partisan lens: In a recent survey conducted by NPR, PBS NewsHour and Marist, 63 percent of Republicans said they planned to buy an artificial tree this year, compared with 44 percent of Democrats. Trump supporters were even more in favor of artificial trees over real ones, with 64 percent over 16 percent, respectively.

READ MORE: How stressed are Americans this holiday season?

Politics and pet hazards aside, for many buyers it all comes down to cost. According to the National Christmas Tree Association numbers, the average real tree cost $75 last year, while the average artificial tree cost $107 — but fake trees are often re-used for up to 10 years, spreading that cost out significantly.

“We have a fake one,” Nicola Smith wrote on the NewsHour’s Facebook page. “I know there’s been some commentary on how the fake ones aren’t that cost effective or good for the environment, but to be honest it’s not an expense I’m comfortable with every year. I’d rather have a one-time payout and know I won’t need to make another for a while.”

NewsHour reader Steven Tamasy agreed. He said he bought an artificial tree for $99 in 2001, so if you divide the sales price by the 18 years he has had the tree, it has cost him about $5.50 each year.

The cost of real trees has risen in recent years, from $64 in 2015 to $73 in 2017. Doug Hundley, of the National Christmas Tree Association said that is good for tree farmers, who took a hit during the 2008 recession: because demand for trees was so low at the time, farmers planted less than usual. It takes about 10 years for Christmas trees to grow, and many have attributed a shortage this year to this recession.

But artificial trees are not immune from price hikes either, especially because the vast majority of them are imported from China, which has been engaged with the U.S. in a trade war. Mac Harman noted that China-imported Christmas lights, along with certain types of artificial trees, had already been hit with a 25 percent tariff this year.

Hoping to stave off the 10-year trend toward artificial trees, tree farmers are trying to make a bid for a new generation of shoppers.

“What we understand about Millennials is that they lean toward buying local,” said Doug Hundley, the seasonal spokesperson of the National Christmas Tree Association. He said as this generation starts to get married and have families, they’re more likely to make an effort to get a real tree.

They also want something that feels “authentic,” said Marsha Gray, a representative of the Christmas Tree Promotion Board. Gray mentioned that the experience of going out to find a real tree is a big part of the draw for many people — and Christmas tree farms have something to offer here that artificial vendors don’t.

But if you prefer getting that fresh balsam smell without leaving your living room, there are a slew of Christmas tree delivery services now available. This year, Amazon launched a service that delivers Christmas trees to customers within 10 days of being cut down. And while these online sales still only comprise about 1 to 2 percent of real Christmas tree purchases, it’s easy to see how Millennials might increasingly turn online out of convenience or habit.

And if you’ve procrastinated this year, there is another benefit to being a real-tree diehard. Data indicates that prices on Christmas trees are lowest during the week leading up to the holiday, with the cheapest day to buy being Dec. 24.

Left: Sebastian Barry, aged 4, runs through a forest of Christmas trees before his family choose which one to buy at Wicklow Way Christmas tree farm in Roundwood, Ireland 2018. Photo by REUTERS/Clodagh Kilcoyne