Why kids need special support when a parent is locked up

CHICAGO – Ray Robinson was 8 years old when he was first detained by police.

He grew up mostly on the south side of Chicago, surrounded by poverty, drugs and gang violence. Robinson’s parents “did the best they could,” but worked long hours, he said, so he spent much of his childhood on the streets, idolizing and emulating older men in his neighborhood.

They would offer him money and candy in exchange for favors, like picking locks. His initial run-in with law enforcement came after he broke into a mailbox and stole Social Security checks. He was put into the back of a police car and officers had a long conversation with his parents before he was released.

“I didn’t really know what was going on because when you’re a child, you could be involved in dangerous activity and illegal activity and not even be aware of it,” Robinson, now 58, said.

Robinson would ultimately spend more than two decades of his life behind bars for a variety of offenses, including dealing drugs and armed robbery.

But those years also had an impact on his son. At about 6 years old, he came to visit Robinson at the maximum security division of the Cook County Jail – one of the largest jails in the country. Robinson’s legs and hands were shackled. Guards escorted him to the visitation area.

“When my son and my nieces saw me, they were perplexed,” Robinson said. “You could look in their innocent eyes and it was like they were stunned. And I didn’t realize they were trying to process that mentally. And it affected them.”

More than 2.7 million kids in the United States have a parent behind bars. And parental incarceration can be a powerful adverse childhood experience (or ACE), an event in childhood that is potentially traumatic, leading to long-term physical and emotional impacts.

Robinson’s son, now 28, is himself in the criminal justice system, under house arrest for possession of a firearm. Robinson said his own incarceration “absolutely” played a role in his son’s situation.

“My faults as a father have become my son’s weakness as my son,” he said.

“Children don’t follow parental instructions as much as they follow parental examples,” he added. “So what he saw me do as far as my affiliation with street gangs and how I glamorized it, he thought it was something to become a part of and partake in.” 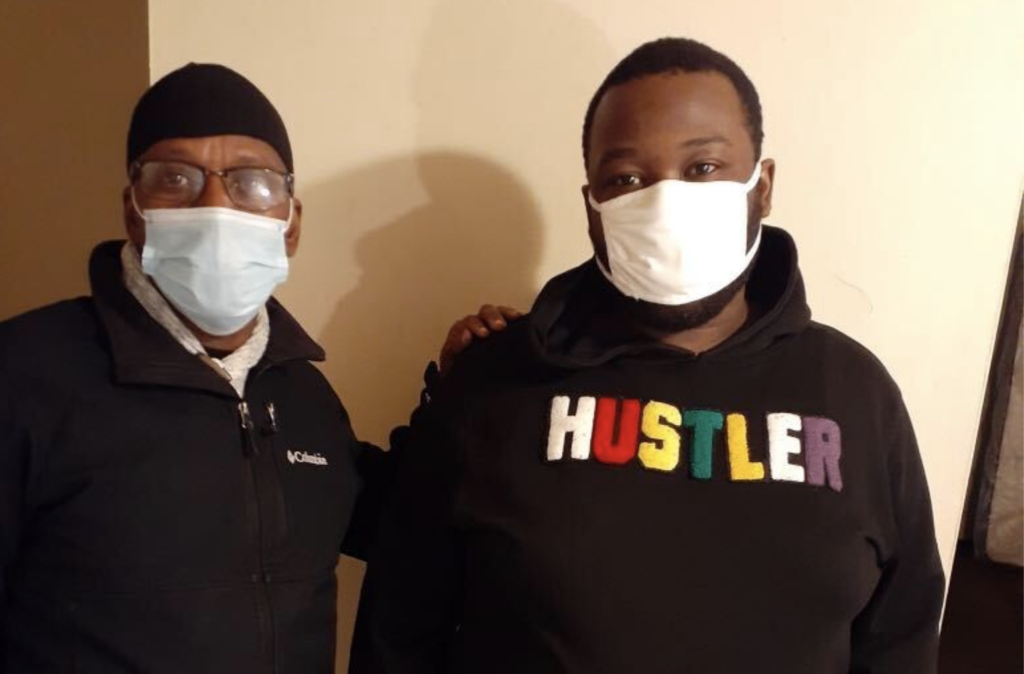 According to clinical social worker Dr. Anna Morgan-Mullane, children start to experience the trauma of their parents’ run-ins with the criminal justice system at the point of arrest.

“There’s a lot of children who will share narratives about how there were up to 20 police officers who came into their home,” she said. “They usually come in at night. It’s usually waking everybody up. So there’s the startled response, there is zero accountability [from law enforcement] for being able to be protective of the children witnessing what’s happening to their parent. … that’s the first point of contact in terms of the trauma.”

In that moment, Morgan-Mullane says, a “protective factor” will start to develop in the frontal lobe of the child’s brain, which controls cognitive skills, emotion, and the ability to make sense of a situation. Immediately, a level of anxiety is “overflooding the body.” Many children will feel frozen.

Once the parent is taken into custody, young children experience something Morgan-Mullane and her colleagues call “ambiguous loss.” They don’t understand why an arrest is taking place, nor do they understand where their parent has gone.

“There’s this mistrust that’s sort of developing within the brain where there is a hyper vigilance and anxiety, a fear,” Morgan-Mullane said. “And when the body is completely consumed with all of those types of symptoms, it becomes harder and harder to feel like you can control your impulses. It becomes even more challenging to feel like there’s an emotional response that you can have to somebody that feels appropriate because there’s so much distrust in the world around you.”

Morgan-Mullane is the vice president of mental health services at Children of Promise, NYC. About 12 years ago, the organization’s founder, Sharon Content, created a first-of-its kind program that weaves mental health care into after-school activities for children of incarcerated parents between the ages of 6 and 13. More than 60 percent of the children in Children of Promise witnessed their parents’ arrests.

Kids in the program come to Children of Promise, NYC sites in Brooklyn or the Bronx, where they start with a meal, then move to circle time, where they can discuss their feelings with others in their age group. Then, they can get help with their schoolwork, engage in a recreational activity like volleyball and participate in a therapeutic group session, which could be an art class. Each counselor leading those activities is trained on how to approach a child experiencing a variety of emotions, including frustration or sadness. The organization’s clinicians are on-site and speak to kids individually while the activities are ongoing.

“They know the clinician, they see the clinician,” she said. “This is not some building where it’s like ‘I go to that building once a week and I’m supposed to expose all of my secrets and my challenges and my fears to this person that I don’t really even know.’”

“Every week, when it comes time for them to really speak about the challenges and some of the emotional traumas that this particular child has gone through, it’s in a much more comfortable space,” she added.

Criminal justice reform advocates say the best solution would be to reduce jail and prison populations and limit the separation of parents from their children whenever possible. But for those who are if people must be held behind bars, their interactions with their children can be improved.

So, in Chicago, experts are trying to combat the trauma of parental incarceration at a different source: jail visitations. 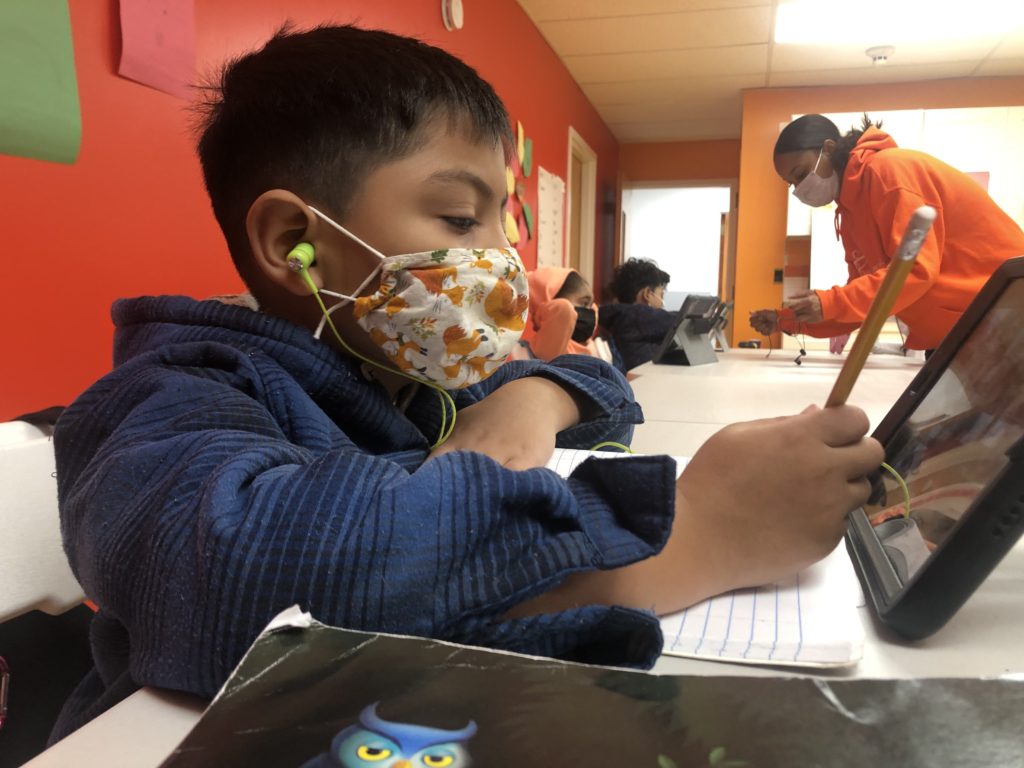 Photo via Children of Promise, NYC

Chicago Beyond – an organization that invests in programs and research to fight childhood inequality in the city – has partnered with the Cook County Sheriff’s office to rethink visitations in a “trauma-informed” way.

As part of that work, in August 2019, people detained in the Cook County jail dressed in plain clothes and were transported to the Chicago Children’s Museum. When they arrived, the detainees – all fathers – met their children, played games and took pictures.

Chicago Beyond’s Dr. Nneka Jones Tapia – whose own father was arrested on marijuana charges when she was 8 years old – helped lead that effort. She is a clinical psychologist and the former warden of the Cook County jail.

“When we put humanity back into the criminal justice system, the staff wanted to come to work, the staff felt that their job was meaningful,” Tapia said. “We found that the children played and were able to experience positive and nurturing relationships with their incarcerated loved ones. And we also found that the people who were incarcerated were less likely to act up. They were more likely to follow the facility rules and, through research, we know that they more likely to be successful upon reentry into the community.”

Cook County Sheriff Thomas Dart said many correctional officials view their role as nothing more than “holding people.” He was troubled when he discovered the department didn’t even keep data on the average number of children detainees have. They’ve started to track that data now, he said.

“The family unit of the incarcerated person – whether you’re talking children or brothers, sisters, mothers – I don’t think has ever been that high on the list of things that were of greatest concern,” Dart said.

But he said ignoring mental health, post-incarceration opportunities and family issues is “reckless and irresponsible.”

So in recent years, his office has tried to ease the burden of parental incarceration, with programs like classes on fatherhood. And in May, Cook County will begin construction on a new domed facility that will house contact visitations between detainees and their children. It will have a separate entrance from the jail and there will be no barbed wire.

To this day, Ray Robinson carries the weight of his incarceration and its impacts on his son. He remembers one particular conversation when his son pointed out the hypocrisy of trying to keep him out of trouble.

“He said, ‘well daddy you used to do it.’ And I had to surrender to that truth.”

But Robinson knows his son’s circumstances are not the product of his actions alone – the environment in which he was raised also played a factor. And in cities across America, disinvestment and systemic racism are often determinative parts of the environment.

Content and Morgan-Mullane at Children of Promise, NYC, point to factors like underfunded schools, limited job opportunities and over-policing in communities of color as some of the main drivers of this cycle.

“It’s not that the child [of an incarcerated parent] is more likely to commit a crime,” Content said. “It’s the systems in which this child is being raised.”