With schools shuttered, districts struggle to feed students and communities

In the weeks since stay-at-home orders meant to curb the coronavirus outbreak took effect across the United States, school districts serving the country’s most vulnerable children faced a particular challenge: feeding their students.

About 30 million children in the U.S. from low-income families receive free or reduced-cost meals in school; for many it may be their only certain meal of the day. As schools closed during the pandemic, districts raced not only to figure out how to teach from afar, but also how to continue providing these critical meals.

They launched meal delivery services and grab-and-go locations that not only feed students, but in many cases adult community members, too, as unemployment numbers and the need for food rise. But the risk of exposing school workers to the virus and mounting financial costs are prompting some districts to rethink their programs. Some are trying to adapt through partnerships with outside organizations. Others have been forced to suspend or scale back their services.

“It was never set up to be a long-term emergency feeding program. We’re operating under the wrong model,” Wilson said.

Food insecurity was a national problem before the coronavirus pandemic, with about 13.9 percent of American households with children being food insecure — or without consistent access to food — in 2018, according to data from the U.S. Department of Agriculture.

Schools are not required to feed students when school is closed, but they’ve all stepped up to the plate.”

The economic effects of the pandemic are amplifying this need. Over the last five weeks workers filed 26 million new unemployment claims. A recent survey from Feeding America, a nonprofit national network of food banks, determined that food banks are experiencing a 70 percent increase in the need for food assistance.

Food banks are struggling to meet the growing demand as they face miles-long lines of people. The limited access to free school meals during the outbreak contributes to this rise, said Hilary Seligman, a professor of medicine, epidemiology and biostatistics at the University of California San Francisco.

“We are dealing with an enormous problem,” Seligman said. “For low-income families you’ve taken out, per child, five to 10 meals, or more, per week that the parents now have to cover.”

USDA programs partially reimburse school districts that provide free or low-cost meals to students living in poverty. The federal Community Eligibility Provision, for example, which assisted more than 28,000 schools in the 2018-2019 school year, seeks to reduce the stigma associated with food insecurity by giving free breakfast and lunch to all students during the school year.

During the pandemic, many of these districts are fighting to continue their meal services. In the Ferguson-Florissant School District in Missouri, bus drivers initially delivered meals to more than 80 locations twice a day, district spokesperson Kevin Hampton said.

READ MORE: Millions of Americans are receiving relief payments this week, but who is being left out?

These operations quickly proved to be a challenge to maintain long-term. A number of school districts report that during the closures they are continuing to pay staff, which includes bus drivers, custodial and cafeteria workers. Additionally, many districts are also feeding adults and children who do not qualify for federal reimbursement.

“Schools are not required to feed students when school is closed, but they’ve all stepped up to the plate and said, ‘We’re going to because that’s what we do,’” Wilson said.

The USDA has relaxed some restrictions, allowing districts to apply for waivers and get funding to give meals to children under 18 who may not qualify during a typical school year. But these waivers do not include adults and are inconsistent from state to state. Mississippi, for example, can still require areas that typically have less than 40 percent of students eligible for free or reduced meals to provide “specific justification” in order to be reimbursed for the meals they give to other children. For districts that have chosen to feed their communities largely, including adults, the costs are even higher.

The 12 school systems that form the Urban School Food Alliance — including districts in major metropolitan areas like New York City, Los Angeles and Chicago — are losing an estimated $38.9 million per week collectively as they feed everyone who comes to them for food, Wilson said. These expenses may force cities to cut school budgets as a result. In New York City, among the places the virus has hit hardest, Mayor Bill de Blasio proposed a budget this month that includes approximately $827 million in cuts to the city’s Department of Education through the next fiscal year. That kind of budget loss will force districts to make difficult decisions. 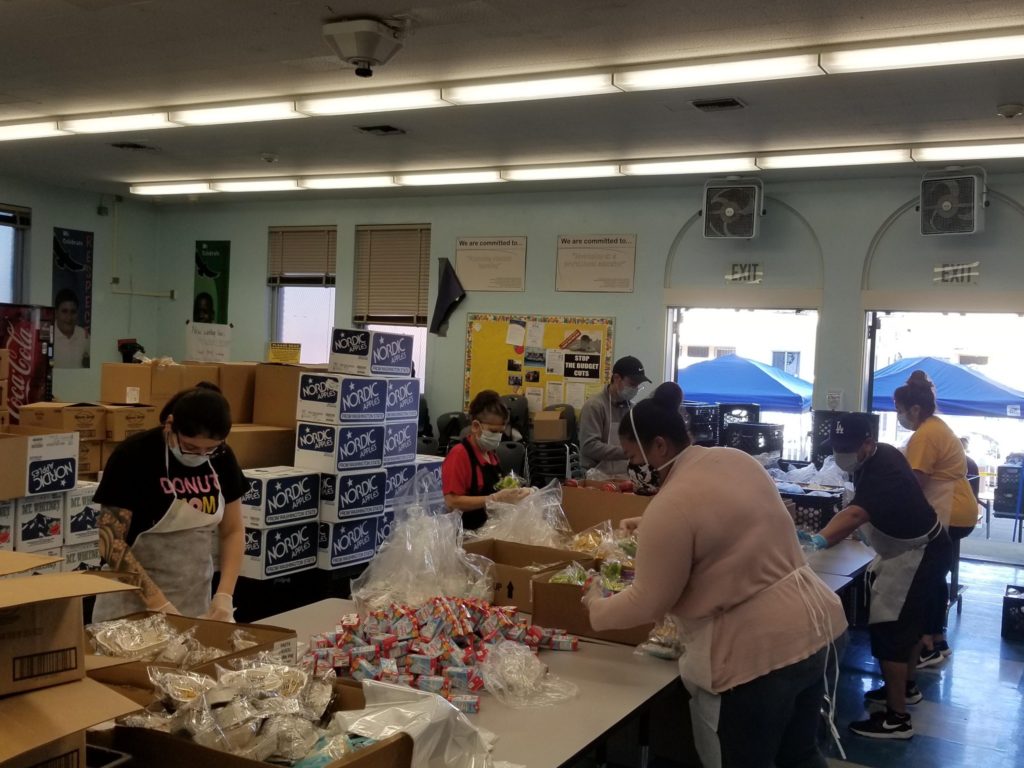 Workers in the Los Angeles Unified School District package meals for students amid the school closures caused by the coronavirus pandemic. Photo courtesy of the Urban School Food Alliance.

Beyond the finances, school districts must also protect their workers from exposure to the virus. Ferguson-Florissant had to pause its food distribution after two bus drivers died within a day of each other. One had tested positive for COVID-19 and the other had exhibited virus symptoms. Other school district workers around the country have also tested positive.

Since suspending its meal program on April 3, Ferguson-Florissant partnered with two community organizations to relaunch on April 20. On three days each week, families can pick up meals at two locations to last them until the next distribution day, Hampton said.

Durham Public Schools in North Carolina also paused its program for a few days when a large number of district staff applied for emergency paid leave after a bus driver tested positive for COVID-19. For its new program that began April 16, the district partnered with local non-profits and restaurants who cook and package food for families.

Each week families can pick up six breakfasts and six lunches per child as well as produce and shelf-stable foods at 24 different sites in Durham. The district also delivers to some homes on Wednesdays. Last week Durham Public Schools served about 2,000 students per day, with four days of distribution. They are working to increase that to 2,500 students per day.

The Durham Public School District said federal funding still covers the costs for qualifying children, while the community partners are supplementing costs for adults. Similarly, Topeka Public Schools in Kansas partnered with church groups like the Salvation Army and local pantries to provide groceries and about 6,000 grab-and-go meals a week for both qualifying children and other families in need.

READ MORE: Worried about your finances during the coronavirus pandemic? Here are some tips.

Even with this success, multiple districts said they are still not reaching the same number of students they would during a typical school week. “The food piece is not our limiting factor, it’s having enough volunteers to open additional distribution locations,” Hampton said. “Some folks also don’t have access to transportation to get to those locations.”

As school teachers and other staff work to fill these nutritional needs, advocates are pushing for federal action.

The landmark $2.2 trillion dollar coronavirus relief bill signed last month included $8.8 billion for child nutrition programs and $18.5 billion for SNAP benefits, formerly known as food stamps. But Seligman from the University of California San Francisco said this aid, while helpful, “will not go very far toward addressing the historic increases in need we are now seeing.” The hope, she said, is to get another aid package that will increase SNAP benefits by 15 percent and increase the SNAP minimum benefit from $16 to $30 a month.

Wilson of the Urban School Food Alliance said she wants to see more emergency food aid and preparation by the Federal Emergency Management Authority. Beyond crisis situations, Wilson believes free school lunch should be a right for all children that would help the neediest families.

Lang in Las Vegas, who checks in with his school families regularly, said he hopes the country does more to address systemic inequalities in the long term.

“What I’m most afraid of is that we’re going to go right back to business as usual,” Lang said. “There needs to be a group of individuals who are not just thinking about right now, but thinking about five years in the future.”

Left: With schools closed due to coronavirus, a young girl reaches up for free meals delivered by school bus to children in a low income area of Falls Church, Virginia. Photo by REUTERS/Kevin Lamarque