How supporting students during Ramadan helps build feelings of belonging

NEW ORLEANS – For Muslims, Ramadan is the holiest month of the year. It is a month of fasting, prayer, reflection, and community. However, some practicing Muslim students in Louisiana feel ignored by their public school community.

Ramadan, which begins April 2 and ends May 2 this year, also falls during the last stretch of the school year for many school districts in the state.  The timing presents an uncomfortable situation for parents with children who are balancing fasting and participation in other religious customs with the demands of school, including critical year-end academic assessments and outdoor activities.

As a result, some Muslim parents are seeking accommodations from their schools for practicing students. Parent advocates say a lack of guidance from the Louisiana Department of Education makes it tough to navigate their religious beliefs.

READ MORE: How teachers can support students during Ramadan

Azadeh Yazdi has a 13-year-old son in a public school in Lafayette, Louisiana. Because of a lack of awareness and accommodations, Yazdi said her sixth-grader has had to put off an essential part of his identity as a Muslim.

“It makes it difficult for me to say to my son that it is time for him to learn how to fast because I don’t feel like the school environment is welcoming. It makes me sad,” Yazdi told the PBS NewsHour. “I feel like I am failing as a Muslim parent. I had to weigh the risk versus the reward for his social-emotional health and not necessarily his faith.”

“It is very tough; it’s quite embarrassing,” she added.

Several Louisiana parents have banded together to start an email campaign that asked the LDE to accommodate students who are fasting. The requests included creating food-free spaces, providing a quiet space for reflection and prayer, avoiding physical activities, flexible testing options, and diversity training to help the other staff and students in their classes understand the cultural differences.

Yazdi said these changes would “foster feelings of inclusion rather than reinforcing feelings of otherness.”

“We’re just asking for our Muslim kids and staff to be given the opportunity to practice our faith in a safe, welcoming environment.”

“We know that it impacts the school environment; putting their safety and education at risk,” said Rana Ottallah, a Muslim parent advocate who started the email campaign. “Students are afraid of being targeted. We are worried that a request at the school level for religious accommodations will not be addressed or will be frowned upon.”

The LDE would not elaborate on what guidance, if any, they have provided to the state’s 1,303 public schools on the topic.

“LDE believes local school systems are best positioned to determine the necessary accommodations to meet the specific needs of its student body,” an LDE spokesperson told the NewsHour in an emailed statement.

A similar response has been sent to inquiring parents. Advocates said without guidance from top education leaders, some students have been altering their appearance, behavior, or names to hide that they are Muslim.

“If the leadership in education in our state does not see how vital guidance about religious accommodation is, how do they expect local districts to comply? It is very dismissive,” said Ottallah, who believes the LDE puts school staff at all levels – from physical education teachers to nurses –  in a tough spot.

“Leaving Ramadan accommodation up to the individuals at the district level will open the door to individual interpretation and discrimination,” Ottallah said. 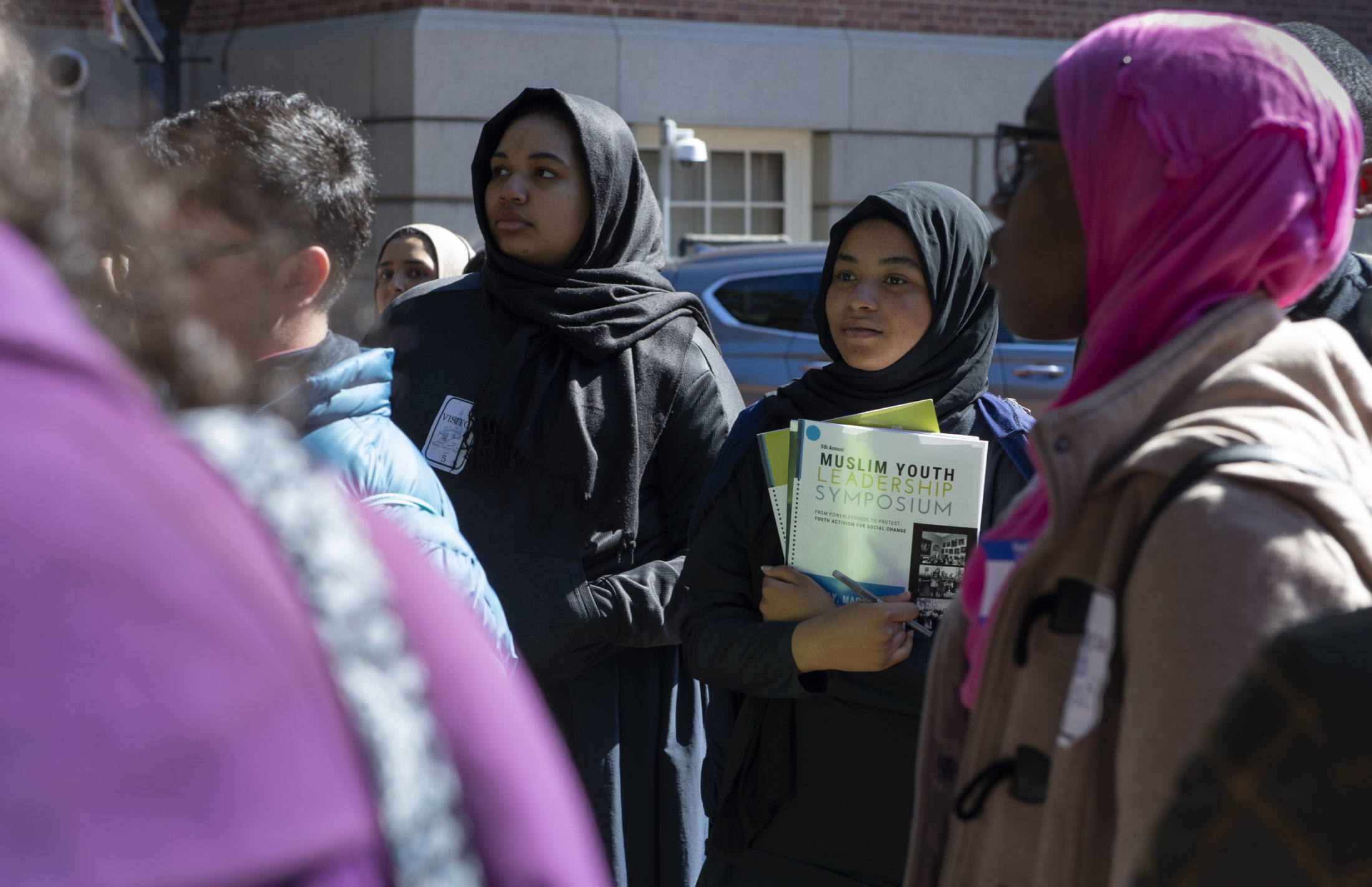 Statistics from the Institute for Social Policy and Understanding show 40 percent of Muslims in the U.S. have school-age children, a significantly higher percentage than other faith groups. Photo by Omar Al Saray/CAIR

In a 2016 report prepared by the Department of Justice, titled “Combating Religious Discrimination Today: Final Report,” the government said there is a “need for ensuring that students have access to reasonable religious accommodations.”

A spokesperson for the Council on American-Islamic Relations (CAIR), America’s largest Muslim civil liberties and advocacy organization, said it is a failure in school leadership to not provide accommodations.

“It demonstrates that they just don’t care or that they are negligent or that they are not paying attention to a segment of their constituency. State leaders help to set the tone for how school systems operate in the sense that their policy and politics can help provide leverage for a school system to put forth a culture that demonstrates a commitment to diversity,” CAIR spokesperson Zainab Chaudry said. “State leaders definitely have a very powerful role to play in changing the culture.”

This week, CAIR offered a webinar to inform parents of their legal rights to request Ramadan accommodations at school. CAIR and other organizations also provide educators with supplemental cultural competency instruction and training materials.

“Sometimes, it poses logistical challenges. I’m not going to say that there is an easy answer; there isn’t,” Chaudry said. “Sometimes you really have to sit down and have the hard, uncomfortable conversations … [but] in the end; those conversations are worth it. On an individual level, it tells a child, ‘You matter.’”

On a national level, Chaudry said it’s “definitely a work in progress.”

“There are some parts of the country where we see more progress than others. It matters who is in charge and their commitment to student voices. There is definitely a lot of work to be done,” she said. 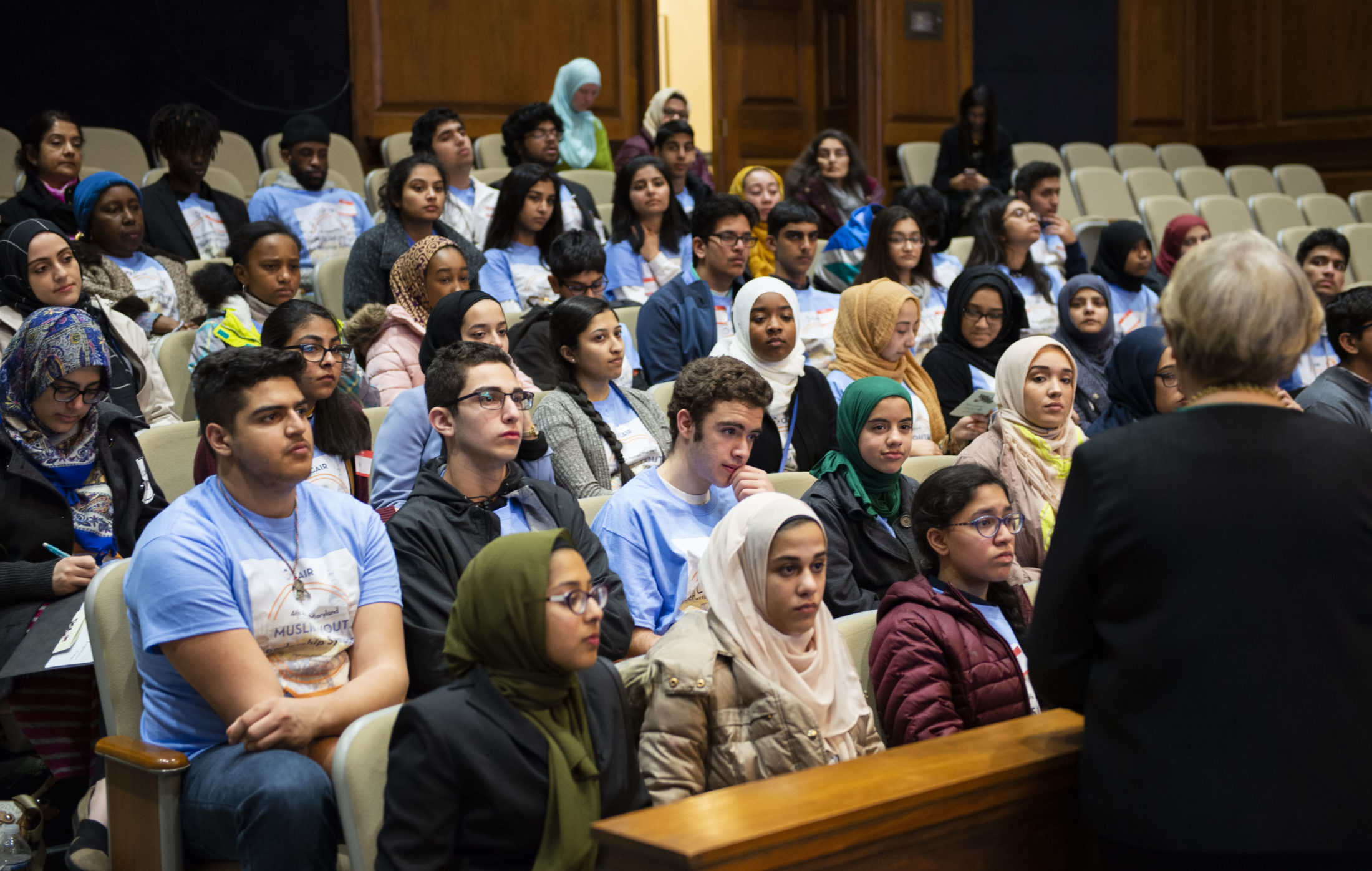 A 2020 poll by the Institute for Social Policy and Understanding (ISPU) found that younger Muslims, ages 19 to 29, are most likely to experience religious discrimination. Half of Muslim families have at least one child in K-12 who was bullied in the past year because of their religion. According to the poll, in a quarter of these instances, an adult teacher or other school official perpetrates the bullying. Additionally, just under 90 percent of young Muslims said religion is important to them.

More recent data from ISPU’s American Muslim Poll 2022, which will be publicly released in full in August, showed that “the decision to support the practicing of their faith matters to a sizable percentage of American Muslims,” ISPU executive director Meira Neggaz said.

“The concessions that we request are simple and reasonable accommodations. These are pretty basic. We don’t feel like it’s unreasonable,” Chaudry said. “There isn’t a price tag, cost, or obstacle that would prohibit schools from accommodating these requests. A lot is just educating school systems on what the needs are, and that is where the cultural diversity training comes in.

It is why during this year’s Ramadan, Louisiana parents are asking state Superintendent of Education Cade Brumley to do more. Parents say the successes are easier to track in schools that have been more intentional about diversity, equity, and inclusion.

Bayan Odeh’s 12- and 17-year-old sisters attend a public school in Gretna, a small city just outside of New Orleans. Over the last few years, she said that as the Muslim student population grew, so did the accommodations when parents became more vocal.

“The difference between now and five years ago is huge. Thankfully, [my sisters] don’t have to hide. They do not have to go on the side or be shy about who they are,” Odeh said. “Every time they come back and complain, it hurts me. The less they complain, the better I feel, and my heart is reassured.”

For Odeh’s sisters, this Ramadan, which celebrates the month God revealed the Quran, is making for a more peaceful observance, and she says it has opened doors with classmates of other faiths.

“It actually makes them curious about what she is doing and what she is practicing. It’s nice because she tried to explain to them what we do and why we do it,” Odeh said. “It’s definitely a learning experience for those who don’t practice Ramadan or know what it is.” 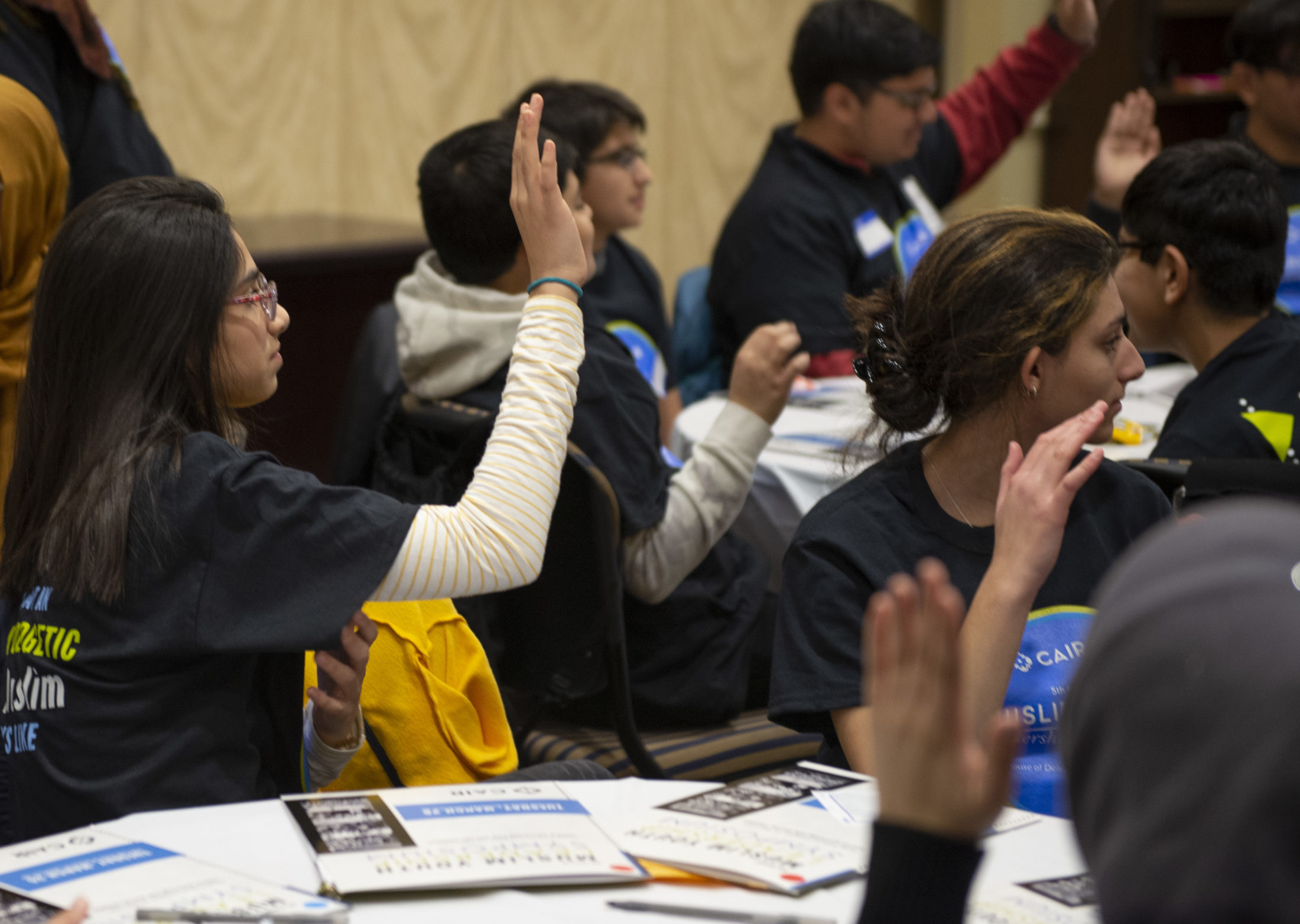 Across the state, in Lafayette, the public schools there have been slower to provide guidance or accommodations. Last May, Reem Arafat decided to move to Aubrey, Texas, searching for better Islamic schools.

Arafat, who is also a teacher, said before moving, she had to homeschool two of her sons because the school wouldn’t provide accommodations. Her oldest son, who is in college now, has been scarred.

“Actually, until this day, it haunts him. He can’t tell people his real name. He goes by another name, a nickname that is Americanized,” Arafat said. “He still doesn’t say anything about his religion; he just stays quiet for fear of being misjudged.”

Like other Muslim parents, Arafat worried about the impact on education, especially around testing for her 14-year-old son and 15-year-old daughter who are in 8th and 10th grades, respectively. While Arafat admits things have slowly improved, she decided to move right after Ramadan last year.

“We had absolutely no accommodations. They were fasting with nothing to eat or drink, but they still had to take the tests,” Arafat said. “It is very difficult. They are beating their brains. With no food and no water, they were trying to focus and concentrate. It made testing difficult. We had to take it and couldn’t reschedule it.”

The lack of accommodations often pushes Muslim parents to make a choice between the academic successes of their children or practicing the traditions of their faith during this holy month. Sometimes, that means making the choice to push their children to skip fasting on test or other big school days in an effort to keep up with their academics.

At the end of the school year, public school students in grades 3-8 and high school must take the Louisiana Educational Assessment Program (LEAP). This annual test measures proficiency in English language arts, math, science, and social studies. It usually occurs during Ramadan and, for 11th-graders, must be passed to graduate.

Ottallah, who has been pushing Superintendent Cade Brumley for the Ramadan accommodations, notes that testing fasting students impacts both the students’ scores as well as the letter grades assigned to schools.

“Students are up late for prayer and worship — their sleep schedule changes in Ramadan. To do their best, students need to be well-fed, hydrated, and well-rested. All that will lead to lower performance on testing days,” Ottallah said.

An LDE spokesman said via email, “If a student misses their specific school’s testing dates because of religious reasons, they can make up the assessment during designated makeup days.”

“Kids rather take the test with the group. They don’t like taking it alone or at a different date; days and weeks after the test prep and reviews are done,” Ottallah said. “So they give up holidays and religious events so that they are not tested on a different day from other students. And that is not fair.”

When asked about LDE guidance to schools on issues affecting Muslim students, including accommodations during Ramadan and parent complaints, an LDE spokesman would not elaborate and instead cited state law: “Students whose religious faith requires absence for the observance of special and recognized holidays shall be granted an exemption from compulsory attendance. For any other extenuating circumstances, the student’s parents or legal guardian must make a formal appeal in accordance with the due process procedures.”

It’s the kind of response that parents are all too familiar with, which they say leaves them to face constant obstacles to exercising their religion.

Left: Muslim students in Harford County, Maryland, pray the first Friday prayer together inside a classroom during a Ramadan observance. Photo by Zainab Chaudry/CAIR