Women’s March returns to the streets, one year after drawing millions

Activists around the country marched on Saturday, one year since President Donald Trump’s inauguration and the Women’s March that began a global movement.

This year, Women’s March organizers are using the one-year anniversary to boost voter turnout, as Sunday’s rally will kick off a voter registration tour throughout the country. The demonstration will take place at Sam Boyd Stadium in Las Vegas, Nevada. And on Saturday, organizers and activists in Las Vegas made signs and trained volunteers in preparation, with about 250 total cities around the country hosting and planning their own demonstrations. 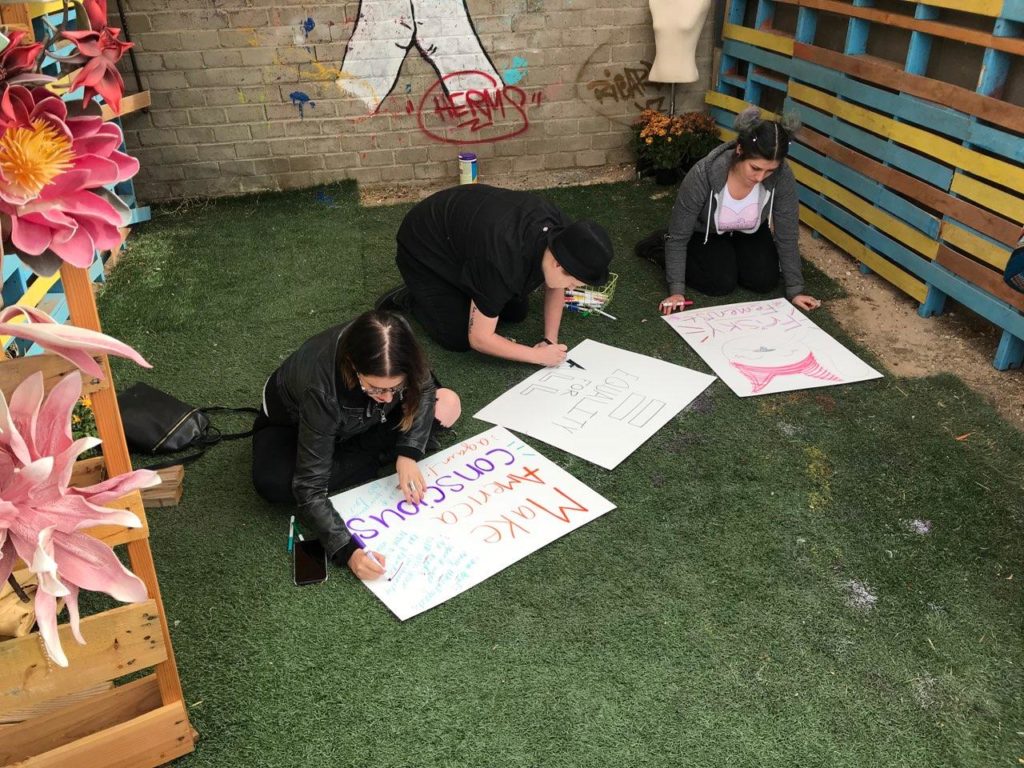 Planned Parenthood Federation hosts volunteers as they make signs in preparation for a rally in Las Vegas, Nevada, on Jan. 20, 2018. Photo by Courtney Norris

In New York City, tens of thousands of marchers gathered on the west side of Central Park on Saturday morning, roughly one year since millions of people joined the Women’s March in cities around the world. 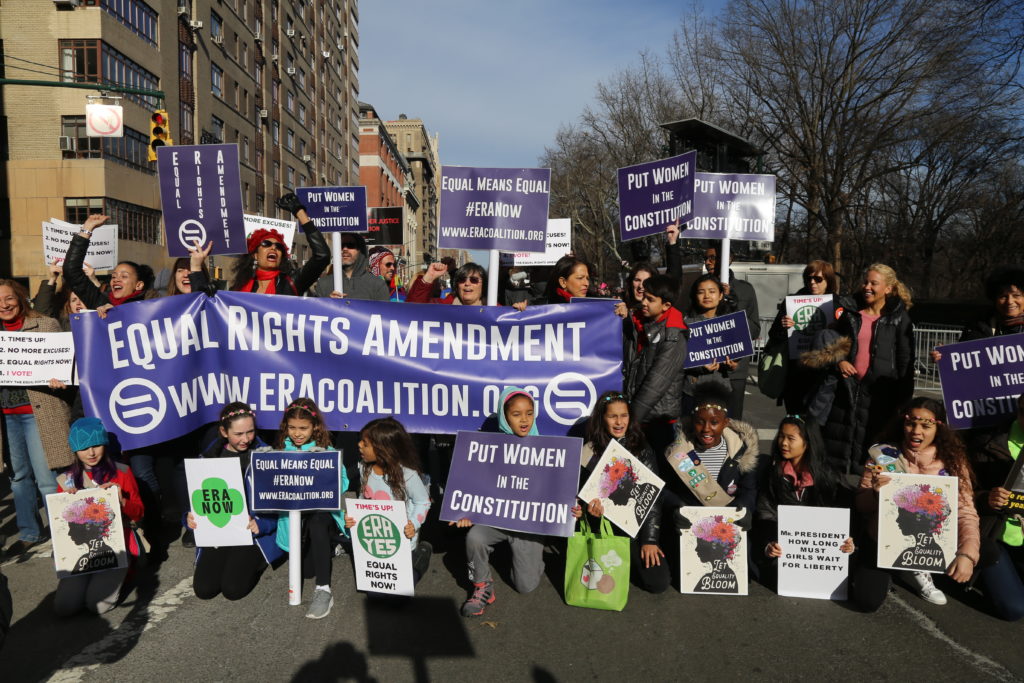 Toward the end of the pre-march rally, throngs of protesters, many of whom wore pink hats and carried handmade signs, pushed against metal police barriers, demanding to march. The crowd stretched back for blocks, with at least 200,000 people in attendance, according to local news reports. 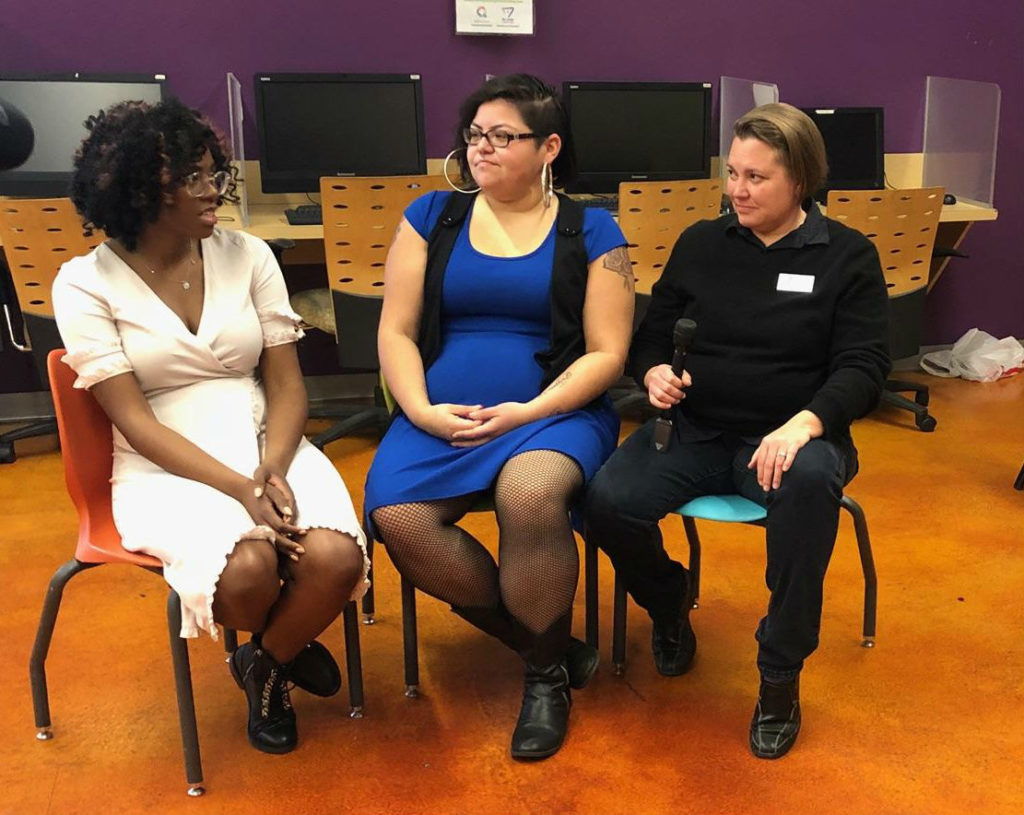 Waves of demonstrators yelled, “Shame, shame, shame, shame,” as they passed by the Trump International Hotel and Tower by Columbus Circle. One group of people shouted, “My body my choice,” and, “Her body her choice,” while emphatically shaking the signs they had brought.

Protesters at the demonstration advocated for issues from increasing healthcare access, to supporting immigrants and condemning sexual harassment in the workplace, with many reflecting on a year of activism since the 2017 Women’s March. 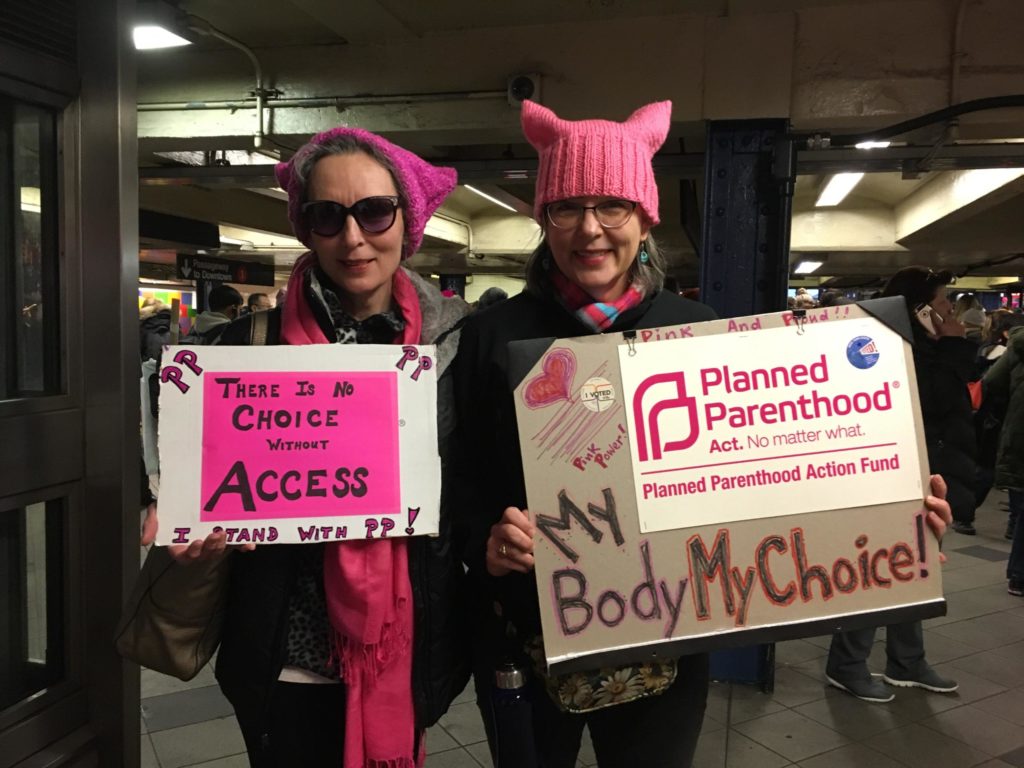 “I think making sure that healthcare is available for all individuals, for all of their needs, not selectively by demographic, is really important,” said Jane Suda, 54. She attended the march with her sister Mary Suda, 58, who is a board member at Planned Parenthood Mohawk Hudson in Lorenz Park, New York.

“Without access, there is no choice,” Mary Suda said.

Estelle Chan, 32, reflecting on the past year, said she believes there’s been a national increase in awareness of women’s issues since the 2017 marches. But she doesn’t credit the Women’s March alone for that.

“The whole Weinstein scandal, the #MeToo movement — it’s all coalescing,” Chan said. “The messages are a little confusing. But, it’s being heard. So, that’s the first step.” 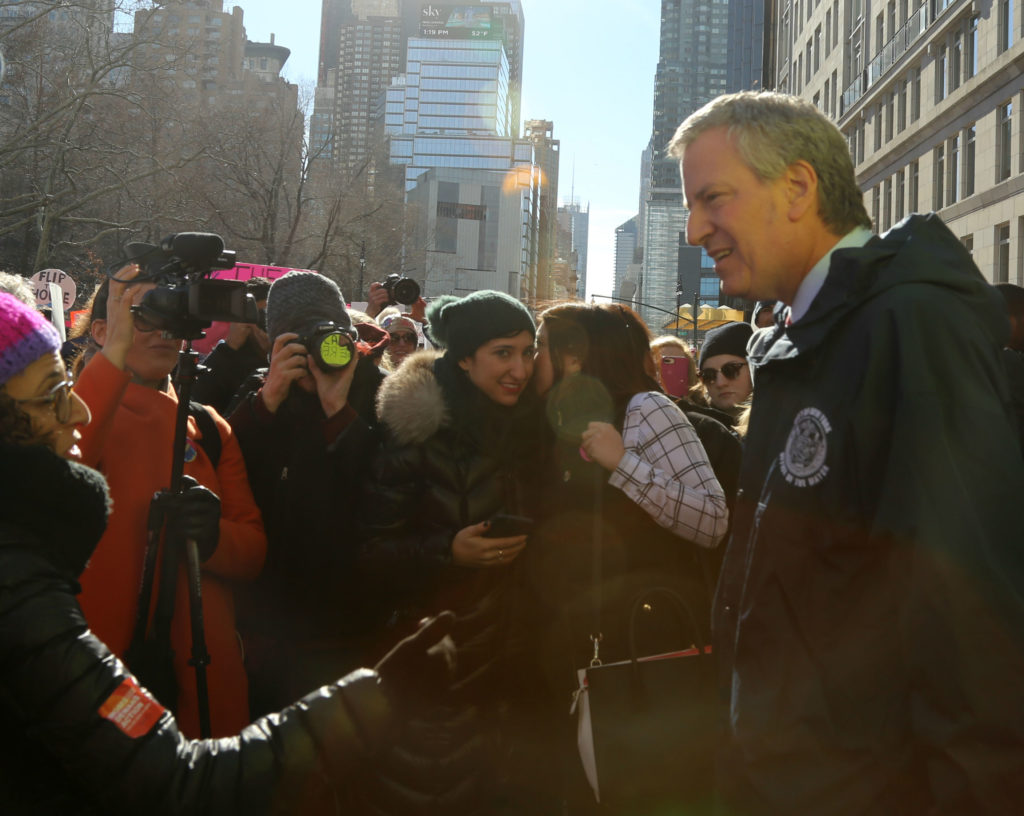 Tiffany Hsu, 22, who works in public health, said it’s been “incredible” to see days and moments of individual activism grow into a movement. Hsu also said that this growing movement needs to be “intersectional,” referencing grievances by people of color who say that feminist movements have focused primarily on white women.

“I think it’s important to remember that black women, that Asian women, that immigrant women, that disabled women, trans women — we are all women,” Hsu said. “And it’s important for all white feminists to realize this and to speak up about these issues, whether that’s attending a Black Lives Matter protest or supporting immigrant rights.”

Last year, an outpouring of marchers flooded cities on every continent, demanding gender equality and attention to other issues including rights for LGBTQ people, people with disabilities, immigrants and others. An estimated 4.2 million people attended sister marches in the U.S. and more than 307,000 attended marches in other countries, according to Vox. In New York City, about 400,000 people marched, according to the mayor’s office.

Feminist activists say the conviction that drove march participation last year also helped trigger a wave of landmark events for marginalized groups. In the year since the Women’s March, the U.S. has witnessed more women running for public office than ever before, as well as the election of some of the first openly trans lawmakers. And in October, The New York Times published an extensive investigation into sexual assault allegations against Harvey Weinstein, spurring the rise of the #MeToo movement.

As people have continued to come forward with their own stories of abuse, more than 50 high-profile men are contending with accusations of sexual misconduct, according to The New York Times.

See below for more photos of today’s march in New York City. 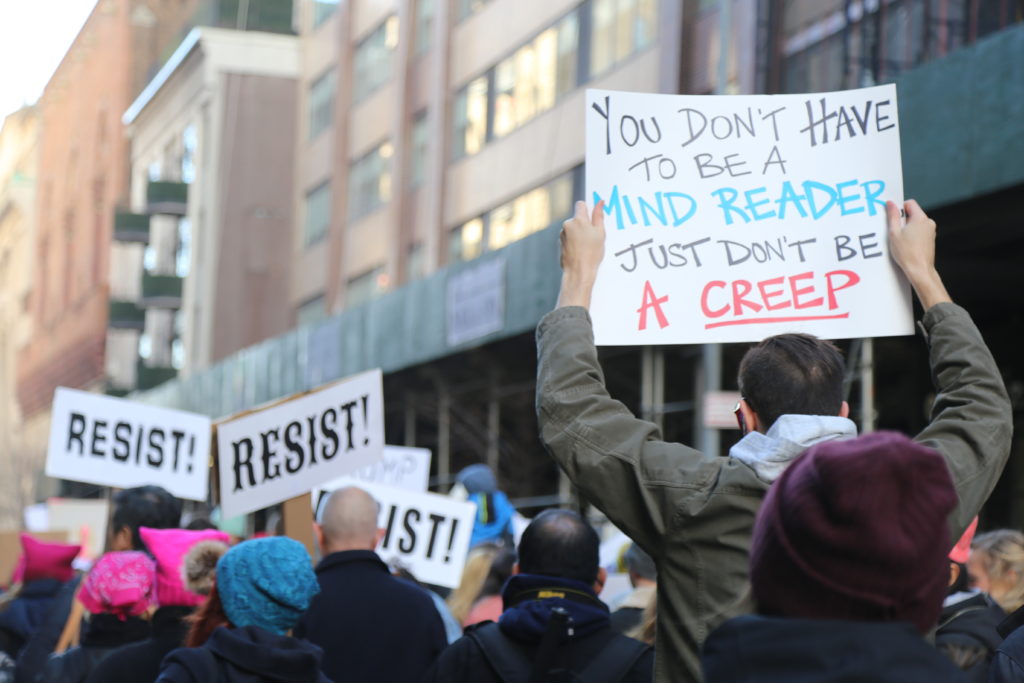 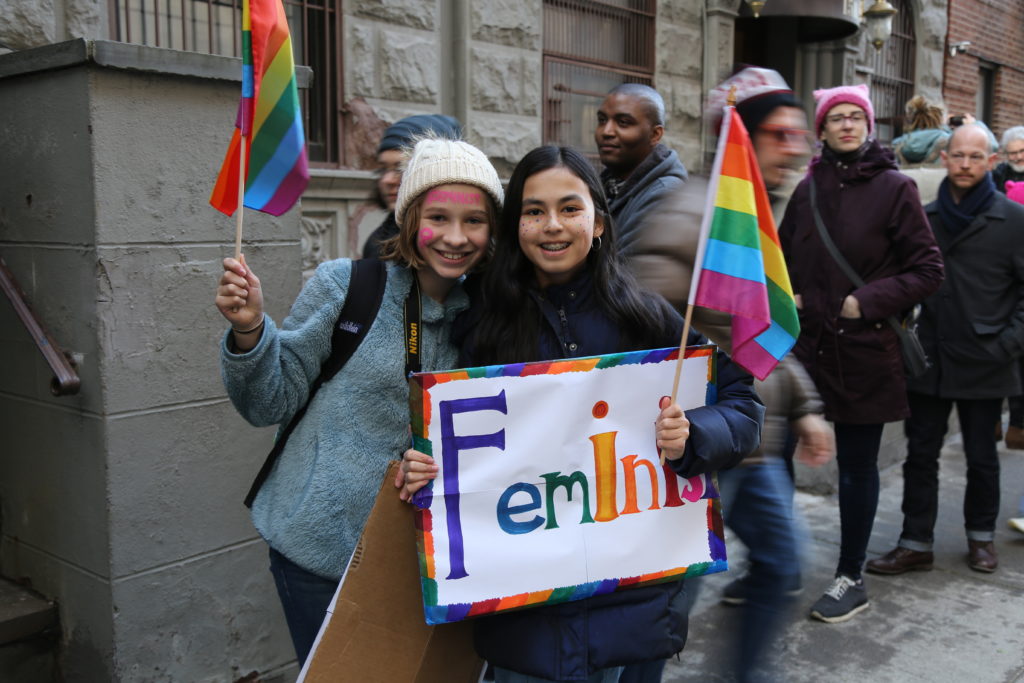 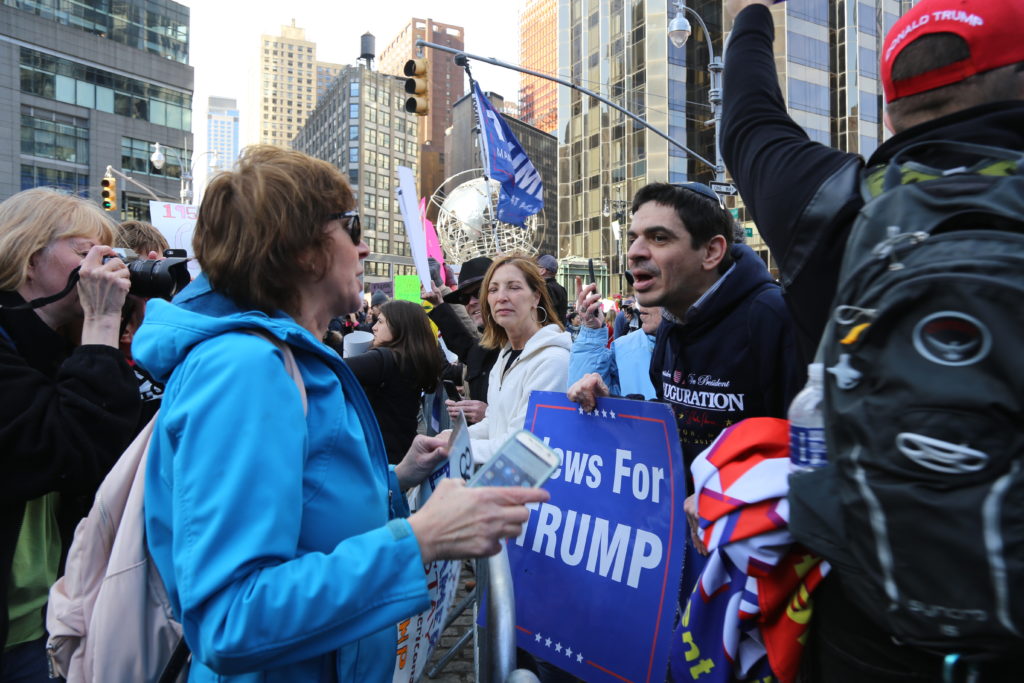 A small group of counter-protesters clashes with attendees of the 2018 Women’s March in New York City on Jan. 20, 2018. Photo by Pavni Mittal 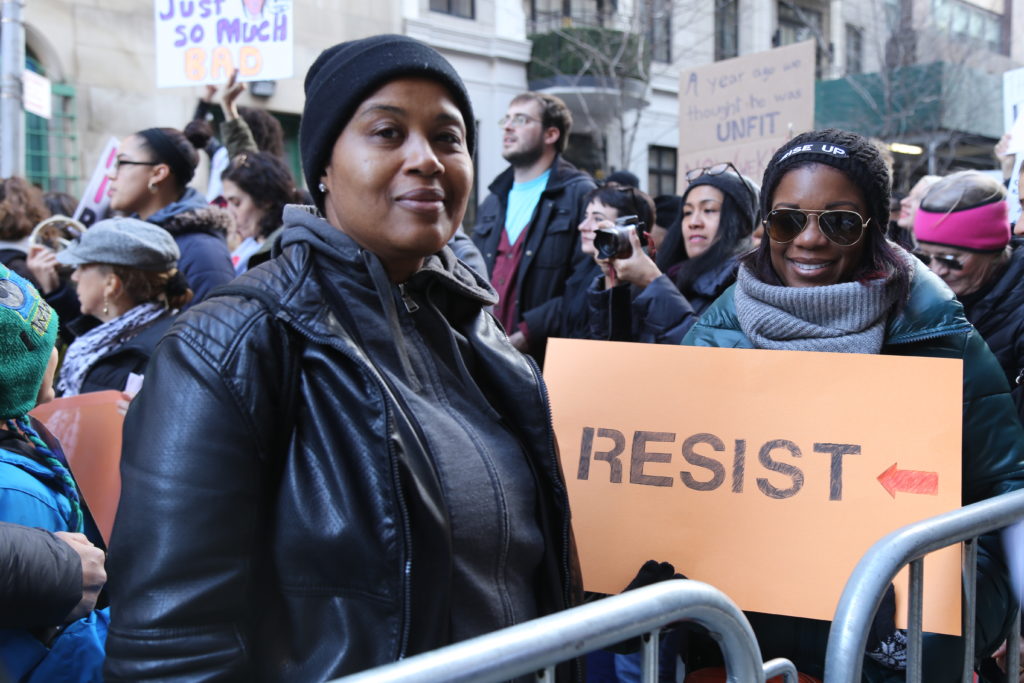 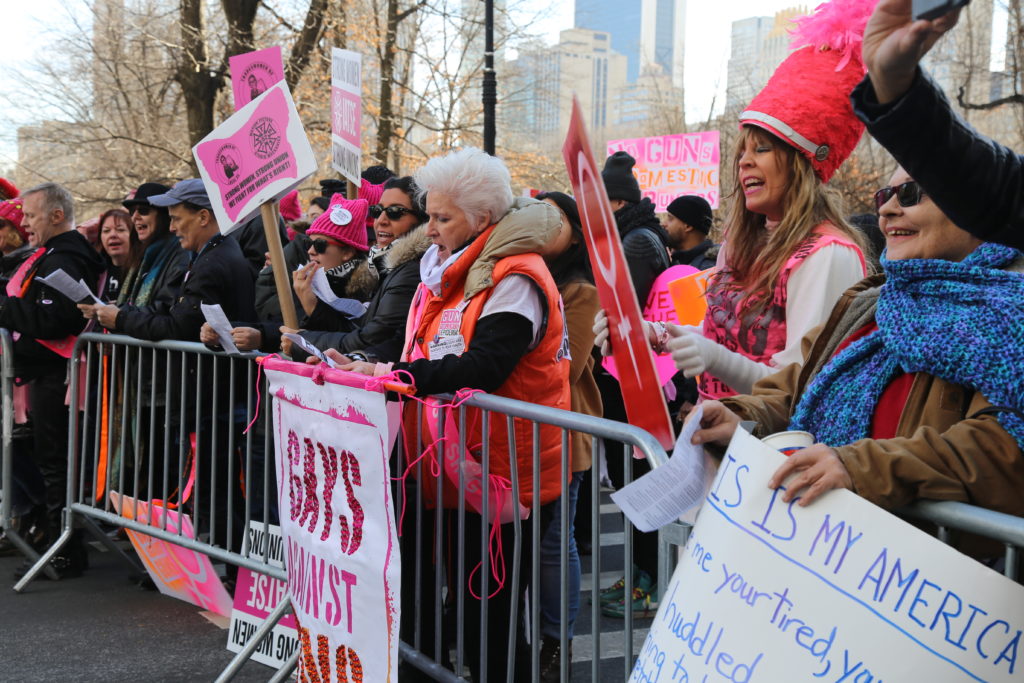