‘I knew that it would be a long, hard fight,’ says activist who wants to raise minimum wage

About a year and a half ago, then-President Barack Obama at the White House reunited second-generation fast food worker Terrence Wise with his mother, whom Wise had not seen for 10 years.

Obama explained at the workers’ rights summit that neither Wise, who lives in Kansas City, Missouri, or his mother, who lives in North Carolina, “make enough money to visit each other.”

The Obama administration had invited them there because Wise has helped push for a higher minimum wage across the country.

Wise started organizing in 2013, when he was making $7.25 an hour at McDonald’s and he encouraged his colleagues to make Kansas City among the first seven cities to raise the minimum wage to $15 an hour.

Four years later, Wise makes $9 an hour (though he says he still has to work two jobs), groups in more than 300 cities have joined the Fight for $15 movement and local government officials in Kansas City have supported him.

But many state lawmakers in Missouri represent suburbs, small towns and rural areas that are mostly Republican and hold most of the state’s political power, which can cause conflicts with Democratic cities.

In 2015, while Kansas City voted to raise the minimum wage to $13 an hour, the state passed a law that prohibits any jurisdiction in Missouri from adopting a higher minimum wage than the state — $7.70 an hour. The law was backed by politicians worried that a patchwork of different wages would be a nuisance for employers. Missouri is one of 26 states to preempt local minimum wage laws, according to the National League of Cities. 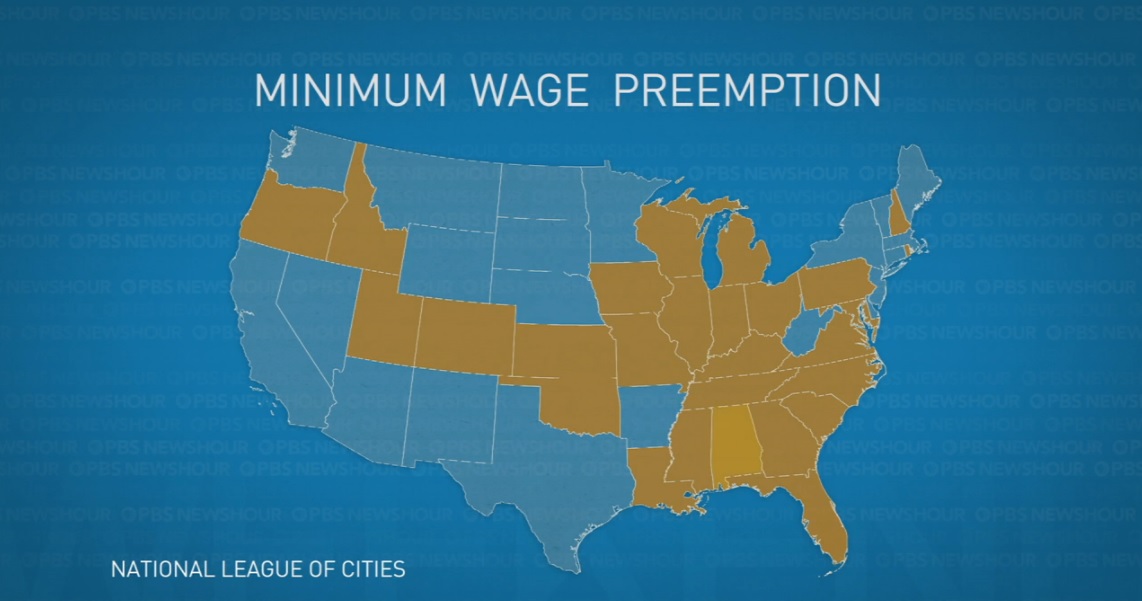 In defiance, the Kansas City Council voted again this year to raise the minimum wage as the state House voted on a stronger preemption bill, which awaits a vote in the State Senate.

Meanwhile, Wise has persisted. In an interview with the NewsHour Weekend, he explains how preemption affects him and his family and why he sees it as a speed bump, not a wall.

What would a $4 raise at this point mean to you?

I can tell you personally for me it does not mean a new Mercedes. It does not mean a new $200,000 home. It simply means I know I could come home at night and there would be food on the table. I know that my growing girls, I could afford clothes for them to wear. Just recently, last week, I had my lights shut off. They’re back on now, but to have that peace of mind knowing that with that increase in wage, those are things that I would not have to worry about. Toilet paper, basic necessities, those are the things that most concern me on a day-to-day basis.

How did it feel when the state two years ago preempted Kansas City?

I like to acknowledge how we got here. Councilman Jermaine Reed, Mayor Sly James, they didn’t just wake up one morning and want to give workers a minimum wage increase. Let’s just be clear. Workers have been organizing and going on strike. We fasted out in front of City Hall. We’ve camped out in tents with our children in the heat, which may seem like a dramatic action, but what’s going on in our houses is dire every day.

We have to struggle with paying rent and keeping food on the table and conditions have not been getting better over the years. To win a vote, even from city council, to have a minimum wage increase here in Kansas City, only to have preemptive laws written in the capital to take these wage increases away from working families, it may seem like a solution for them, but really they’re on the wrong side of history. They really are.

What kind of wages do you make?

Four years ago I was making $7.25. Before we started organizing and fighting here in Kansas City, I hadn’t had a raise at work for three years. And right after the first strike here in Kansas City, the next day back at work, my employer offered us a raise. Alone, I could not get a raise by myself, but with my coworkers and allies around the community, I was able to get a raise from my employer. Right now, at $9 an hour, I know that wouldn’t be the case had I not four years ago began to organize and fight for better. And we’re still not at a level where we can take care of our families and help in our local economies, but we’ve seen small progress.

Do you think it’s harder to fight this fight in a red state?

I’ve learned to stand up and fight for better. I’ve learned that women weren’t just handed their rights in their country. They had to fight long and hard for it, as well as black people in this country had to fight for their civil liberties. For me, it’s the richest nation on Earth. It’s the United States of America, whether you’re in Alaska, Hawaii, New York, California or the great Midwest. And we also know that anybody who works in this nation should make a living wage. I don’t care if you live in a red state or a blue state.

We’re also not blind to the fact that racism plays a big role in economics as well. So I know it really down south, where we know Jim Crow laws once existed and segregation was at its height at one time. We know that wages are lower down south. And we know that where we were once great in industrial work in the great Midwest where unions were strong, Chicago and the Midwest. And up north, we see higher wages, where more multiracial workers come together and organize and fight for more.

So that’s how we know we have to fight for racial and economic equality all in the same. Because it’d be one thing to receive a higher raise here in Missouri or any state but still not be treated fairly, or have racial justice in other cities as well. So we know it’s a tough, long, hard fight, but it’s one that we’re committed to. We have to keep going.

How long did you anticipate raising the minimum wage would take?

It’s really easy, because, what we’re doing may seem different. You see workers going on strike, workers organizing. But when you look back at history, people stood up and did this before and faced a lot more danger. They were killed, hung for these things, to fight for these civil liberties and these rights. And then when you look back in history, these weren’t short fights. There were slaves for over 150 years in this country. These were long, hard fights.

I knew that it would be a long, hard fight, and I know that if we win $15, if McDonald’s sits down with me tomorrow and gives me a union and $15, you better believe we still gotta fight to keep that. You gotta keep organizing, you gotta keep building power to keep what you’ve already won.

Critics have said that the minimum wage is not for a parent or a family wage, it’s supposed to be for a teenager. What do you think about that?

We know that these jobs are held by adults, working adults. We know the working class has changed over the years. These are things that we know. We know that minimum wage, not only here in Kansas City but across the country, has not been keeping up, it’s been stagnant. Wages have not been on the rise here. And living wage should be available for everyone. The minimum wage should be a living wage.

How has the journey been over the past four years?

When it first started in 2013, Kansas City was one of the first seven cities to join the movement; it’s over 300 cities now. Early on, you know, I’d just never seen a movement or anything where workers were standing up and taking action. I’d never read about that in school or been a part of that my working life. So to become a part of that, it was new, and I was also very scared. And you know, I never knew about organizing and fighting for better. Not only racial but economic justice as well.

Fast forward four years now and seeing the changes we’ve made and the victories we’ve won and the allies we’ve won, it’s been incredible.

This transcript has been edited for clarity and brevity.