For some participants, the March for Our Lives was yet another exercise in a long fight against gun violence.

Hundreds of thousands of people joined the demonstration in cities across the nation on Saturday as part of a massive call for gun reform that began after a mass shooting at Marjory Stoneman Douglas High School in Parkland, Florida, killed 17 people on on Feb. 14. A rally in Washington, D.C., brought together youth advocates from around the country who have recently organized their peers in school walkouts, at town halls and in other community spaces. But students of color, whose communities are disproportionately affected by gun violence, say the March for Our Lives was especially significant to them. 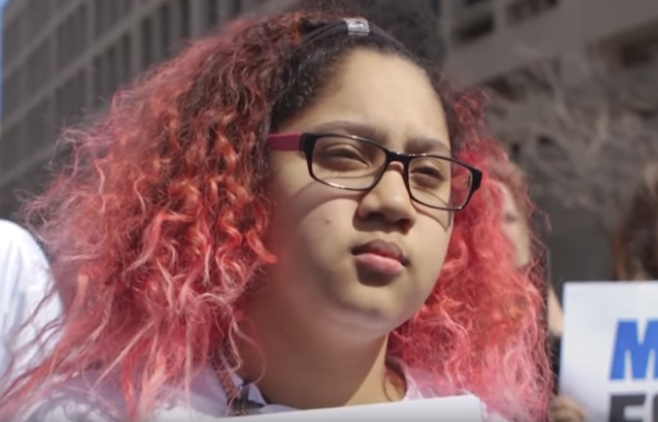 Diamond Oscasio, 16, traveled to the March for Our Lives from Chicago. Photo by Student Reporting Labs

On Friday night, Diamond Oscasio, 16, boarded a bus to drive 13 hours from Chicago to attend the march. Her cousin, Frankie Gonzalez, was shot and killed in crossfire while he was sitting in his car at the age of 25.

Now, Oscasio works with the youth-led organization BRAVE, or Bold Resistance Against Violence Everywhere, which took a front-and-center place at the rally on Saturday. The Chicago-based organization works to to increase awareness and inspire action around human rights, justice issues and feminism. It also advocates against gun violence in a city where the number of shooting incidents jumped from 2,426 in 2015 to 3,550 in 2016, and where the majority of those incidents occurred in areas where low-income black and brown people predominantly live, according to the Associated Press.

Oscasio said she wants people to understand that many young people of color in inner cities experience gun violence every day. “The Parkland kids, for them it was just that one moment and with us, every day someone dies,” she said. “For us it’s forever, it has been forever.” 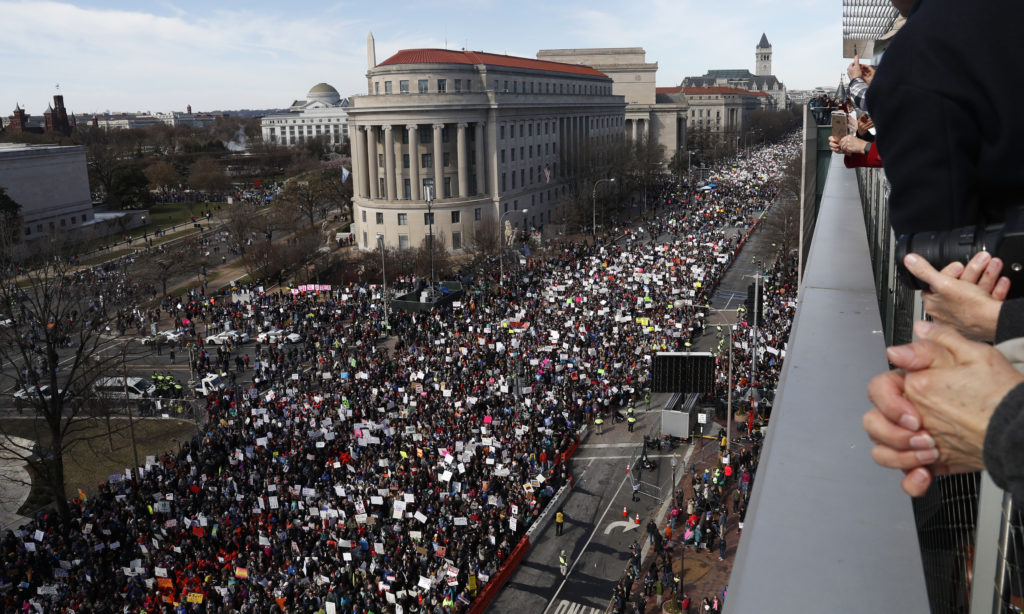 As seen from the Newseum building, students and gun control advocates participate in the “March for Our Lives” event demanding gun control after recent school shootings at a rally in Washington, U.S., March 24, 2018. Photo by Leah Millis/Reuters

Baltimore city youth also marched and spoke out on the effects of gun violence in black communities. Jecha Wright, 14, who traveled from Baltimore, said, “Everybody needs to be safe … Everybody shouldn’t get a gun just because they want to. There needs to be more rules and [the government should] make it harder to get a gun.”

Baltimore Mayor Catherine Pugh announced earlier this month that the city would organize an effort for 3,000 Baltimore students to travel to the march for free by bus. She told the NewsHour that young people “left their classrooms to express their concerns around the violence that’s occurring in our city and in our country.”

“The voices of urban youth need to be heard,” she said.

READ NEXT: Youth voices take center stage at March for Our Lives

Oscasio said the march gave her hope that students of color can have a voice in the fight for school safety and gun reform. “There’s a lot of youth out here angry,” she said. “We will keep standing up for what we believe, until what we believe comes true.”

Left: This report was produced by students from Northview High School in Covina, California, who traveled to the March for Our Lives in Washington, D.C., to report on it in collaboration with the PBS NewsHour's Student Reporting Labs.