The leaders of the House Veterans Affairs Committee are facing a number of challenges in the year ahead, when they will try to set new priorities for addressing a department riddled with years of leadership challenges.

During the Trump administration, the VA was beset with problems related to leadership. After firing secretary Dave Shulkin via tweet in 2018, Trump nominated White House physician Dr. Ronny Jackson, who withdrew from consideration after questions arose about his creation of a hostile work environment and inappropriate work behavior. The next confirmed secretary, Robert Wilkie, came under criticism for his handling of sexual assault allegations at VA facilities.

In a statement announcing McDonough’s nomination, the Biden transition team focused on his ability to navigate government bureaucracy and shape policy, saying he “earned the trust of the president-elect as a first-class manager with the knowledge and vision to deliver results.”

In his confirmation hearing before the Senate Veterans Affairs Committee, McDonough said he expected his past experience with government bureaucracy — and his reputation as a “fighter” — would serve him well in the new role.

“I understand how to untangle and solve large complex challenges both across and within large agencies. I’ve seen firsthand that when our government is at its best, it can help the American people, including our veterans, and allow them to live in security and dignity,” he said.

Takano and Bost both share priorities about the committee’s work in the year ahead, even if they sometimes disagree on how to address them.

Both Takano and Bost agreed that the replacement of former VA Secretary Wilkie would instantly boost morale within the agency.

“Wilkie is gone. It’s a new administration,” said Bost, who replaced retired Rep. Phil Roe, R-Tenn., as ranking member at the beginning of the session.

Takano and numerous veterans’ groups had called for Wilkie to step down following his handling of a 2019 sexual assault claim made by Andrea Goldstein, a Navy veteran and Takano staffer. Goldstein said a male veteran harassed and assaulted her at a VA facility.

A December 2020 Inspector General report found that Wilkie, as secretary, had set a tone that was “at minimum unprofessional and at worst provided the basis for VA leaders’ attempts to undermine the veteran’s credibility.” The report said that shortly following Goldstein’s complaint, senior officials began communicating about whether she had made previous complaints, and Wilkie said in an email that Takano was “laying the grounds for a spectacle.” The Inspector General also named Rep. Dan Crenshaw, R-Texas, as someone who allegedly spoke to Wilkie about ways to discredit Goldstein, with whom he had previously served.

Several government watchdog and veterans’ groups called for an ethics investigation into Crenshaw, including the Campaign for Accountability, a nonpartisan group focused on exposing misconduct and malfeasance in public life.

A CfA spokesperson said the ethics committee had not yet responded to that call.

In a statement responding to the IG report, Justin Discigil, a spokesperson for Crenshaw, said that “any claim that he participated in a ‘smear campaign’ is absurd and totally false,” and noted that the IG report “never makes this claim.”

Women are the fastest-growing subpopulation of the military and veteran communities, according to a 2018 report by Disabled American Veterans, a nonprofit organization serving veterans. But a VA study showed that one in four female veterans has reported “inappropriate or unwanted comments or behaviors” from male counterparts on VA grounds.

Takano and Bost said that they both expect McDonough to prioritize addressing the issue of sexual misconduct at VA facilities. “Women — and men — need to know that if they come forward, that they can trust that their concerns are going to be taken care of,” Takano said.

The Jan. 6 attack on the U.S. Capitol that left five people dead exposed a current of violent extremism pervading the entire country, but particularly the veteran community. Analysis by numerous media outlets shows that nearly one in five people charged in connection with the Capitol attack are veterans. Takano renewed his call for Wilkie to resign following Wilkie’s failure to condemn the mob; Wilkie tweeted about the attack two days after it took place.

Both Takano and Bost believe the committee could play a role in dealing with questions of why veterans might be particularly susceptible to radicalization, but previewed some of the fault lines they might encounter in future debates.

Takano pointed to a committee report released last year on “spoofing” operations targeting veterans with a disguised online message made to look like it’s from a trusted source. The report warned that foreign actors had used this technique to spread disinformation and exploit financially vulnerable veterans.

“There is a very real and growing problem here, and we need to work together across all viewpoints to determine how to mitigate the risks and keep online spaces as a safe place,” Takano said.

The report detailed how bad actors would push “socially divisive content” on issues like Black Lives Matter protests, kneeling during the national anthem, and immigration on fake veterans’ sites to drive engagement. Republicans on the committee dissented with parts of the report, stipulating that many of its recommendations fall outside the committee’s jurisdiction and citing concerns that efforts to reduce “spoofing” could end up infringing upon veterans’ right to free speech.

“The one thing that we want to make sure of is that, as long as they’re following the Constitution, we’re not taking away their First Amendment rights,” Bost said. 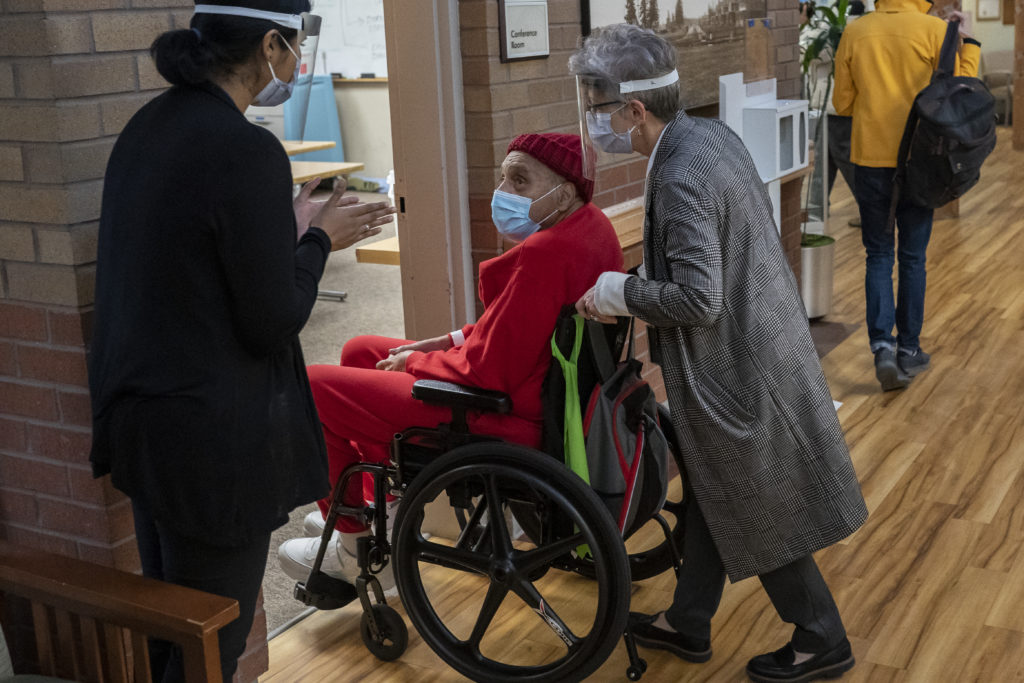 Takano also said the VA’s handling of the COVID-19 pandemic would continue to be a top priority for the committee, pointing to facilities that care for elderly veterans in particular. The VA owns and operates more than 100 community living centers throughout the country, which Takano praised for limiting infections and deaths. But he had low marks for state veterans’ homes, which receive VA funding but are not staffed or managed by VA employees, and said the VA must step up its oversight role of those facilities.

As one example, the state-owned Holyoke Soldiers’ Home in Massachusetts had 76 veterans die in its care between March and September 2020 after they contracted COVID-19. In September, two former leaders of the home were indicted on charges of criminal neglect.

According to the VA website, there were 10,339 known deaths among VA patients who tested positive for COVID-19 as of Feb. 24. Just under 40 percent of those deaths were listed as “inpatient.” The statistics do not single out deaths at state veterans’ homes.

The VA has limited visibility on each of the state veterans’ homes, said Patrick Murray, the legislative director for the Veterans of Foreign Wars nonprofit organization, one of the “Big Six” national veterans groups. Murray said the VA should establish a central office or resource to collect information about each state veterans’ homes, in the same way state approving agencies report on education and training programs consistent with the GI Bill.

He also said the VFW wants stricter management standards for leaders of state veterans’ homes, noting that the Holyoke leaders were unqualified for their positions.

“They’re not golden parachute retirement jobs to just be given to people,” Murray said.

In December, two House members from Massachusetts introduced a bill that would require the heads of state veterans’ homes to obtain licenses similar to skilled nursing facility administrators, and would require the VA to find ways to improve oversight of the state-owned homes.

Bost said he believes the committee can be proactive in recommending improvements to state veterans’ homes, but cautioned that oversight committees, as well as the VA itself, should be mindful of states’ autonomy.

“We don’t want to make that overstep that all of a sudden we decide that only we as the federal government will come in and take over,” he said.

Takano and Bost also said they wanted to focus on the perennial issue of veterans’ suicides. According to VA analysis released in 2020, the average number of veteran suicides per day was 17.6 in 2018. They both want to build on a collection of laws passed late last year that address the issue, including Takano’s bill that ensures veterans in crisis can get emergency mental health care regardless of cost.

But one item that was cut from the legislative package sent to President Donald Trump’s desk was a recommendation by Trump’s own task force on veteran suicide to promote training among veterans on how to store firearms safely.

Takano defended the provision and said the committee should revisit the issue. “It is very far from trying to take away weapons or arms. And it’s a very touchy subject in the veteran world. But it is a topic that needs to be addressed,” he said.

But Bost said he was concerned that veterans were already shying away from VA care because they were worried about their firearms being taken away. Under federal law, veterans who are deemed unable to manage their own finances may also face background checks that render them unable to purchase or own firearms.

“To remove a veteran’s Second Amendment right, it’s kind of like removing their First Amendment right. It’s a judge that should be able to do it,” he said.

But despite their differences on individual issues affecting veterans, the two leaders reiterated their desire to set a bipartisan tone for the committee.

“The main issue with this particular committee is to provide for the needs of the veterans above all else,” Bost said.