President Donald Trump’s defense team tried to dismantle the House impeachment case as unconstitutional and went on the offensive Monday against former Vice President Joe Biden as the first phase of the Senate trial moved toward a conclusion.

But Trump’s lawyers mostly ignored reports of incendiary assertions made by former national security adviser John Bolton, potentially a key figure in reconstructing what happened behind the scenes. In a forthcoming book, Bolton reportedly writes that the president acknowledged he was withholding military aid from Ukraine in exchange for the announcement of an investigation into Biden — a top 2020 Democratic presidential candidate — and his son, Hunter.

The revelation has ratcheted up pressure on Senate Republicans to vote to call witnesses, including Bolton, to testify in the trial.

Here are key takeaways from the latest developments in the trial.

Sen. Mitt Romney, R-Utah, said Monday morning that the news in Bolton’s manuscript makes it “increasingly likely” that enough Republicans would vote to call witnesses in the trial. “I’d like to hear from John Bolton,” Romney told reporters later in the day. He added that he wanted to “hear relevant information before I make a final decision.”

Democrats need four Republicans to join them in order to secure a vote to subpoena witnesses and documents. So far, Romney and Sen. Susan Collins, R-Maine, are the only two Republicans who have signaled they might vote with Democrats on the issue. Other potential swing votes including Sens. Lisa Murkowski, R-Alaska, and Lamar Alexander, R-Tenn.

Senators will vote on witnesses later this week after the White House team finishes its oral arguments, and senators have a chance to question both sides. A deal would likely include witnesses called by both the House managers and the president’s lawyers.

The ‘age of impeachment’

Last week, House Democrats argued that they had no choice but to impeach Trump for abuse of power and obstruction of Congress. On Monday, the man who lead the independent counsel investigation into President Bill Clinton argued that “presidential impeachment has become a weapon to be wielded against one’s political opponent,” instead of a “measure of last resort” to rein in a corrupt president, as envisioned by the framers of the Constitution.

In a lengthy rebuttal for the White House defense team, Kenneth Starr argued that the frequency of impeachment inquiries in the modern era — three since the early 1970s, against Richard Nixon, Clinton and Trump — had turned the past few decades into the “age of impeachment.”

To hear Ken Starr say impeachment is something that should be once a century is just a bit rich.

Democrats said Starr was an imperfect messenger for the history lesson, given his role in the 1990s pursuing a years-long investigation into Clinton. At the time, Starr was heavily criticized by Democrats for launching an open-ended probe using his powers under legislation creating the independent counsel that has since expired.

“To hear Ken Starr say impeachment is something that should be once a century is just a bit rich,” Sen. Sherrod Brown, D-Ohio, said in a brief interview.

Trump’s lawyers argue the president did not commit any crimes

The president’s lawyers also seized on the debate over whether articles of impeachment need to constitute crimes. In their oral arguments last week, Democrats claimed there was no legal or constitutional requirement that a president be impeached for misconduct that would qualify as a crime under the law. 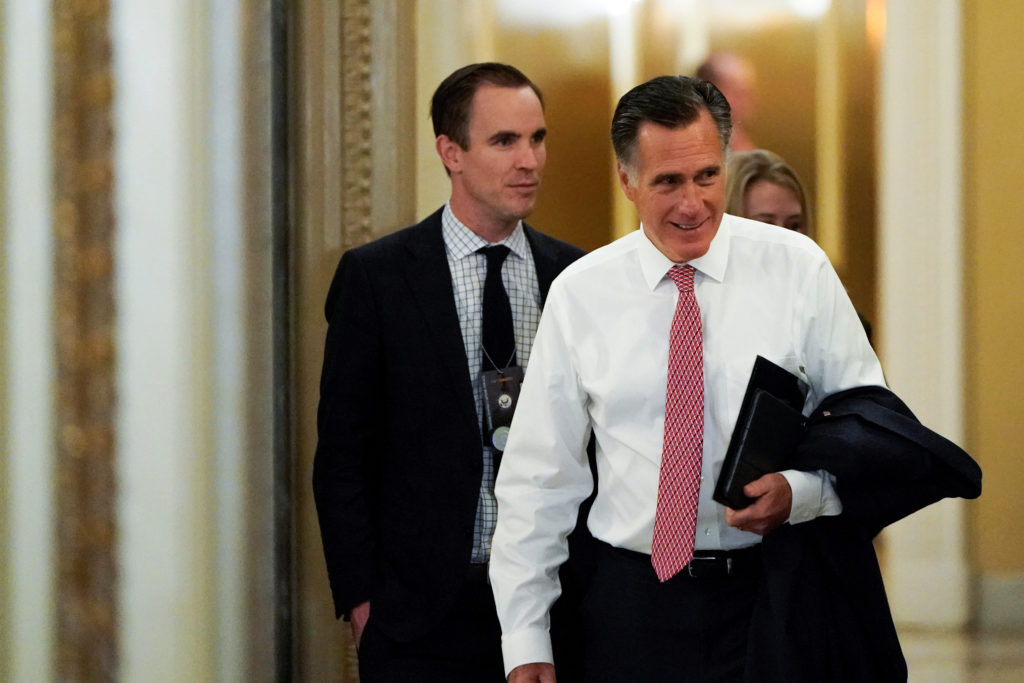 Sen. Mitt Romney, R-Utah, walks to the Senate Chamber as the impeachment trial of President Donald Trump continues in Washington on January 27, 2020. By REUTERS/Joshua Roberts

“Impeachment should be evaluated in terms of offenses against established law,” he said.

Democrats may disagree, but the White House team’s arguments backed up what Republicans have been saying since the trial began. On Monday, during breaks in the trial, GOP senators called the Trump lawyers’ case persuasive. “The White House has done a brilliant job of shredding the House managers’ case,” Sen. Joni Ernst, R-Iowa, told reporters.

Bringing up Burisma and the Bidens

Trump has claimed for months that he did nothing wrong in asking the president of Ukraine last July to investigate alleged corruption by his political opponent Biden and his son Hunter, who sat on the board of the Ukrainian natural gas company Burisma while his father served as vice president.

On Monday, Trump’s legal team laid out their case against the Bidens. Using bank records and emails, Pam Bondi, a member of Trump’s defense team and former Republican attorney general of Florida, painted a portrait of an inexperienced Hunter Biden who got a lucrative job through his political connections. Bondi also tried, less successfully, to link the younger Biden’s work for Burisma with the U.S. effort — led by then-Vice President Biden — to oust Ukraine’s prosecutor general.

Democrats last week argued there was no evidence backing up the allegations of corrupt business dealings by the Bidens in Ukraine. But at least in this phase of trial, Trump’s defense team will have the last word on the Bidens, and they took advantage of it. “All we are saying is, there is a basis to raise this issue, and that is enough,” Bondi said.

After her presentation, Republican senators echoed the sentiment. “The president was entirely justified for asking for an investigation” into the Bidens, Sen. Ted Cruz, R-Texas, said.

In a shrewd move, Trump’s lawyers focused on the institutional role of the Senate in helping protect the government’s system of checks and balances, and legitimate reasons why presidents from both parties invoke executive privilege to protect sensitive conversations with advisers from leaking to the public.

Deputy White House counsel Patrick Philbin argued that Trump was not given an opportunity to defend himself during the House impeachment inquiry, a claim Democrats vigorously dispute. As a result, Philbin said, the House conducted a “show trial” that denied Trump the “basic due process required by the Constitution.”

Philbin also took issue with the second article of impeachment, which alleges obstruction of Congress. Trump had the right to invoke executive privilege and refuse to comply with the House Democrats’ subpoenas for witnesses and documents, Philbin said. Democrats declined to try to enforce every subpoena in court, and are now asking the Senate to do that work for them by subpoenaing witnesses and documents in the trial, Philbin said.

If the Senate agrees, he said, it would set a dangerous precedent and erode the ability of future presidents to invoke executive privilege. The Senate’s actions will “become the new normal” and could “forever damage the separation of powers,” he said.

The witness debate will likely be settled later this week. It could lead to a divisive court battle over executive privilege. Whatever happens, in the coming days Philbin’s argument will surely resonate with Republican senators who oppose upending Senate precedent.