It did not take long for the first 2020 presidential debate to descend into chaos.

President Donald Trump and former Vice President Joe Biden wasted little time in attacking each other Tuesday night in their first one-on-one showdown of the general election. The candidates sparred on everything from the coronavirus pandemic to racism to climate change during the course of the 90-minute debate in Cleveland.

But any policy differences were largely lost in a near-constant flurry of interruptions, cross-talk and pleas for decorum by the moderator, Chris Wallace of Fox News.

Here are key takeaways from the first debate. 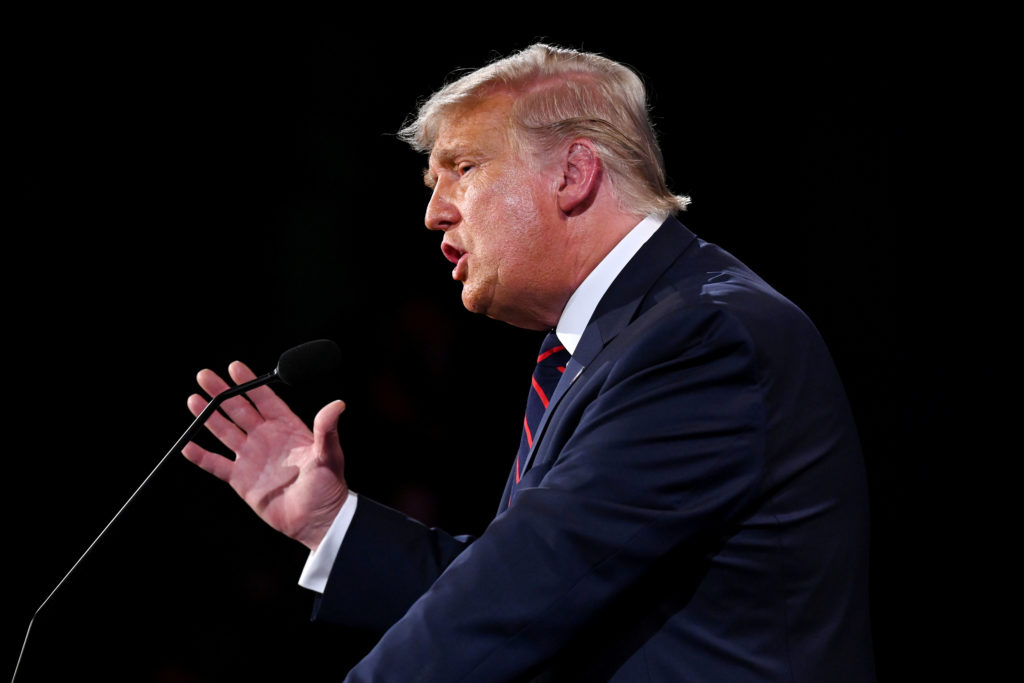 The president did not do extensive debate prep ahead of Tuesday, but he did come prepared with a plan he deployed early and often: interrupting Biden to attack him, his family, and his record in the Senate and the White House.

Trump repeatedly went after the former vice president’s son, Hunter Biden, claiming at one point that he made “tens of millions” in profit illegally from the Ukrainian natural gas company Burisma, a criticism frequently lobbed by Republicans though no wrongdoing has been found. Joe Biden said the claims were untrue. Trump said that hundreds of thousands more Americans would have died from COVID-19 if Biden was in office. But there’s no way to prove that. He attacked Biden for not being more vocal in his support for law enforcement, saying Biden refused to even utter the words out of fear of losing votes from the progressive left, while also coming at him from the other side, hammering him for his support of the 1994 crime bill that has been criticized for fueling the rise in mass incarceration.

And in a swipe at Biden’s age and mental acuity, Trump at one point said Biden, who is less than four years older than the president, couldn’t remember what he was talking about. He also took issue with Biden’s intelligence. “There’s nothing smart about you, Joe,” Trump said, even suggesting Biden’s grades in college were poor.

The performance was vintage Trump: free-wheeling, off-the-cuff, and largely devoid of facts or statistics to back up his claims. The president also drew criticism for refusing to condemn white supremacists, when he was asked to do so by the moderator, and declining to say unequivocally that greenhouse gas emissions cause climate change. 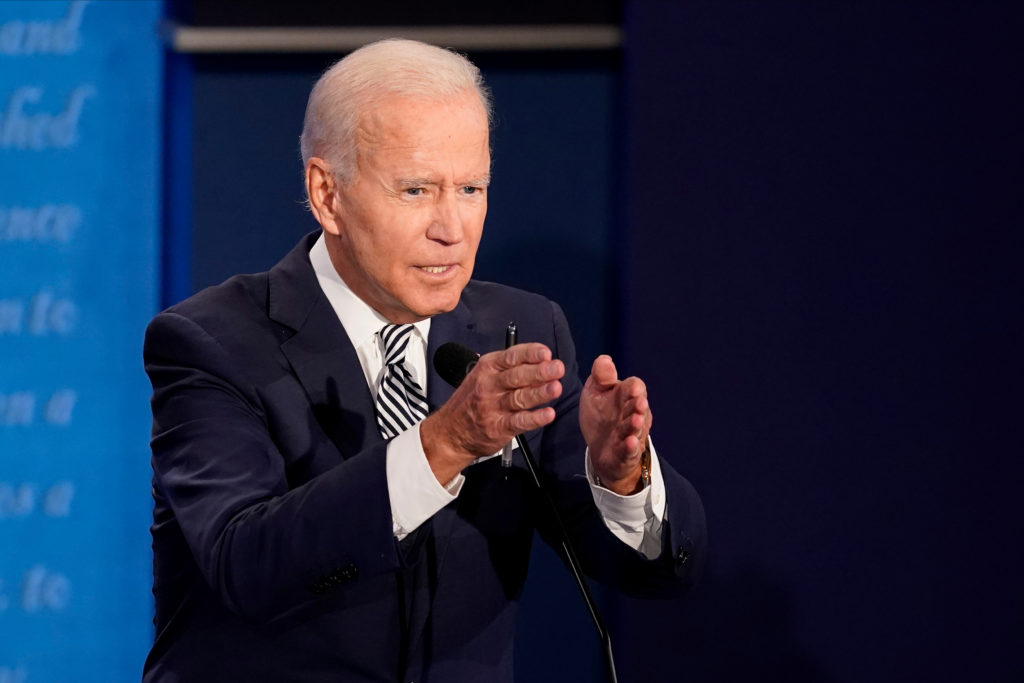 Faced with a machine-gun volley of interruptions and attacks, Biden largely was disciplined and stuck to you-gotta-be-kidding-me smiles and targeted counter attacks rather than trying to best Trump at his more pugilistic game.

This was not always the case during the primary debates, when Biden at times awkwardly lost his cool amid some attacks from fellow Democrats. On Tuesday, Biden was not able to stay above the fray throughout the entire evening — calling Trump a “clown,” a “racist,” and “the worst president in history” — but his strategy seemed to be to let Wallace do most of the scolding.

That said, Biden rarely was able to break through the three-person cacophony on stage. He had a few moments of engagement on key issues, including on law and order and Trump’s assertion that the suburbs are in danger of increasing violence under a Biden administration.

“I was raised in the suburbs,” Biden said. “This is not 1950. All these dog whistles and racism don’t work anymore. Suburbs are, by and large, integrated. … What’s really a threat to the suburbs and their safety is [Trump’s] failure to deal with COVID.”

He was at his best when bluntly contrasting Trump’s vision. To Trump’s assertion that racial sensitivity training is teaching people to “hate America,” Biden responded, “Nobody is doing that. He’s just a racist.” The former vice president went on to say, “People have to be made aware of what other people feel like, what insults them, what is demeaning to them. … It makes a gigantic difference in the way a child is able to grow up.”

Wallace tried to regain control of the debate at various points throughout the night. His first attempt to restore order came after Trump and Biden began arguing during the first two rounds of questions, on the Supreme Court and health care. Before moving on to the coronavirus pandemic, Wallace cautioned the candidates that it was a “serious” issue and urged them to treat it that way.

After being repeatedly interrupted while answering a question, Democratic presidential nominee Joe Biden tells President Donald Trump: "Will you shut up, man? … This is so unpresidential."

The discussion that followed — and the rest of the debate — quickly devolved into a slugfest. Later on in the evening, Wallace once again asked the candidates to try to have a civil dialogue. “I think that the country would be better served if we allowed both people to speak with fewer interruptions.”

In the exchange that followed, Trump interrupted again in order to get his point across, leading Wallace to call out the president as the worst culprit of the evening. Wallace also tried to set the record straight, drawing a comparison to a debate moderator in 2012 who was criticized for fact-checking the Republican presidential nominee Mitt Romney in real time.

A sharp contrast on climate change

The debate was chaotic, but there was one exception: the section on climate change, a topic that was not on the list of segments Wallace selected and that were reported on in the last week. In that segment, both candidates presented their views — largely without interruption — and a stark policy contrast emerged.

Trump touted his rollback of Obama-era energy and environmental regulations, a popular part of his record with conservative voters. When asked if he believed that human activity causes climate change, Trump repeatedly dodged the question by saying that he wanted “crystal clean water and air.” Eventually, when pressed by the moderator, Trump said he believed greenhouse gas emissions “to an extent” were responsible for climate change, but were just one of several factors.

In contrast, Biden presented a plan centered on reducing fossil fuel production and boosting clean energy, moves that he said would lead to the creation of new jobs, which he also pointed to when asked by Wallace about the cost of his vision.

He also distanced himself from the Green New Deal, which is popular with progressive voters, saying his climate plan was different. Nevertheless, Biden said the future was shifting away from coal and oil. “Nobody’s going to build another coal fired plant in America,” he said.

There is an open question about what value presidential debates have within the context of an election and for voters. This debate could have shown how to have an important national conversation in a crisis, could have soothed voters’ anxieties by giving them real solutions to consider.

Instead, it almost certainly raised the blood pressure of every American watching.

Many of the bad habits politicians have been developing over decades were supercharged: interruptions, manipulation of facts and rambling tirades. Much of that was driven by Trump himself. But both candidates’ struggles to actually engage each other on ideas, rather than speak in soundbites and hyperbole, illuminated the deeper problem in American politics: rhetorical hand grenades have decimated real political discussion.

Add to that, a dark cultural cloud. When specifically given the chance, Trump declined to denounce white supremacist and far-right militia groups and seemed to endorse a self-described “Western chauvinist” group classified by some as a hate group.

“Proud Boys — stand back, stand by,” Trump said, in response to a question about extremist violence. “I’ll tell you what, somebody’s got to do something about antifa and the left because this is not a right-wing problem.”

Some active Proud Boys responded to the president’s words as an endorsement of their aggressive tactics.

Biggs insisted that the group wants to restore law and order and that outsiders have taken their jokes and banter the wrong way.