KABUL, Afghanistan — Afghanistan’s president said Sunday that he will not free thousands of Taliban prisoners ahead of all-Afghan power-sharing talks set for next week, publicly disagreeing with a timetable for a speedy prisoner release laid out just a day earlier in a U.S.-Taliban peace agreement.

President Ashraf Ghani’s comments pointed to the first hitch in implementing the fragile deal, which is aimed at ending America’s longest war after more than 18 years and getting rival Afghan factions to agree on their country’s future.

Still, the U.S. has said a planned U.S. troop withdrawal over the next 14 months is linked to the Taliban’s counter-terrorism performance, not to progress in intra-Afghan talks.

Washington’s Peace Envoy, Zalmay Khalilzad, who served as America’s first ambassador to Afghanistan after the 2001 U.S. invasion, spent the past 17 months running on-again, off-again talks with the Taliban to hammer out the agreement.

The U.S.-Taliban deal signed Saturday in the Middle Eastern State of Qatar envisions the release of up to 5,000 Taliban prisoners by the Afghan government ahead of talks between Afghan factions meant to begin March 10 in the Norwegian capital of Oslo. The Taliban would release up to 1,000 prisoners.

Ghani told a news conference in the Afghan capital of Kabul on Sunday that this wasn’t a promise the United States could make. He said the release of any prisoners was a decision for his government to take and that he wasn’t ready to release prisoners before the start of negotiations.

“The request has been made by the United States for the release of prisoners and it can be part of the negotiations but it cannot be a precondition,” Ghani said.

The U.S.-Taliban deal is seen as a historic opportunity to extricate the United States from Afghanistan, a nation convulsed by conflict since the Soviet invasion in December 1979. Yet it could also unravel quickly, particularly if the Taliban fail to deliver on a promise that no terror attacks would be launched from Afghan soil. 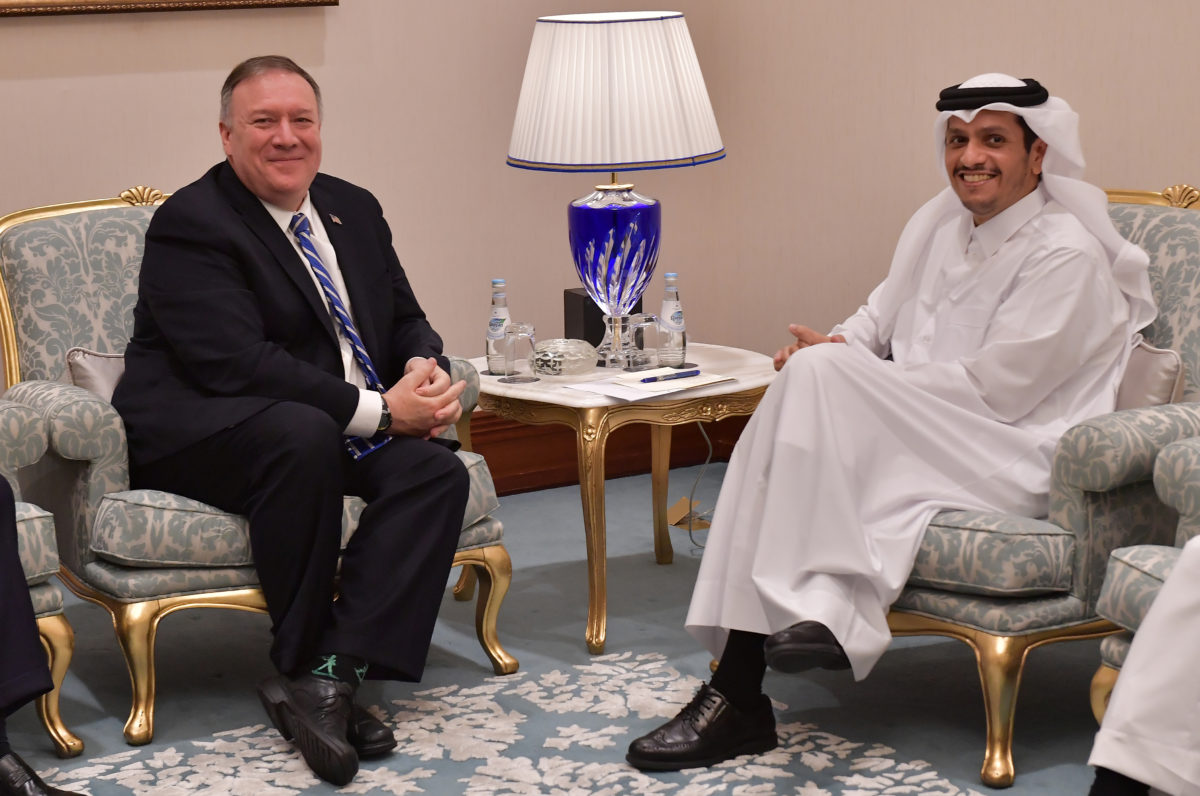 Qatari Deputy Prime Minister and Minister of Foreign Affairs Sheikh Mohammed bin Abdulrahman al-Thani meets with U.S. Secretary of State Mike Pompeo on the sidelines of the peace signing ceremony between the United States and Afghanistan’s Taliban in Doha, Qatar February 29, 2020. Washington and the Taliban are set to sign a landmark deal in Doha that would see them agree to the withdrawal of thousands of U.S. troops from Afghanistan in return for insurgent guarantees. Photo by Giuseppe Cacace/Pool via Reuters.

The intra-Afghan talks between squabbling political factions and rival Taliban in Afghanistan are even more intricate — even if a potential failure might not slow the withdrawal of American forces.

“Everything is interconnected,” he said Sunday about the agreement’s 14-month timeframe.

“The prisoner exchange will be one of the first confidence-building measures, so it will remain a very critical step that we need to push forward,” he added.

U.S. officials, travelling with Secretary of State Pompeo on his return to America, noted that the agreement stipulates “up to” 5,000 prisoners would be released, without referring specifically to Ghani’s statements.

President Donald Trump told reporters Saturday at the White House that he will be “meeting personally with Taliban leaders in the not-too-distant future,” and described the group as “tired of war.”

He did not say where or why he plans to meet with Taliban leaders. He said he thinks they are serious about the deal they signed but warned that if it fails, the U.S. could restart combat.

“We think we’ll be successful in the end,” he said, referring to all-Afghan peace talks and a final U.S. exit.

But he also warned: “If bad things happen, we’ll go back” in with military firepower.

Many Afghans, however, have welcomed the possibility of peace.

Afghans in eastern Nangarhar posted pictures of dozens of men dancing in the street to celebrate the signing. In eastern Khost province, a Taliban stronghold, the night sky was alight with red tracer bullets fired by celebrating residents. Footballers in southern Helmand Province, also a Taliban stronghold that has seen heavy violence, began a three-day soccer tournament to celebrate the signing.