WASHINGTON (AP) — Former Vice President Joe Biden and Sen. Bernie Sanders sparred one-on-one Sunday in a Democratic debate held without a live audience in the shadow of the coronavirus pandemic. The growing crisis prompted some questionable statements from the presidential rivals, as did issues they argued about for months on once-crowded stages.

A look at how some of their claims compare with the facts:

SANDERS: “We’re the only major country on earth not to guarantee health (care for) all people. We’re spending so much money and yet we are not even prepared for this pandemic.”

BIDEN: “It has nothing to do with ‘Medicare for All’ — that wouldn’t solve the problem at all.”

THE FACTS: Biden has a point. The coronavirus pandemic has taken countries by surprise regardless of the type of health care system that they have. Spain has a single-payer system, known as “social security” in that country. Italy guarantees coverage for all through a regionally based system. But both countries have struggled to get control of the outbreak, and their governments have been forced to take stringent measures not yet seen in this country.

THE FACTS: That’s no guarantee. It’s a promise. The health insurance industry is dead set against a public option — a government plan that would compete with private insurers — and would fight it. So would many Republicans and perhaps even some Democrats.

Democrats originally sought a public plan as part of the Obama-era Affordable Care Act. But they lacked the votes to get it through the Senate, even when they held a commanding majority in that chamber. The same fight would play out again if Biden is elected president. Whether he’s able to secure a public plan depends on the composition of Congress.

SANDERS, to Biden: “You have been on the floor of the Senate time and time again talking about the need to cut Social Security, Medicare and veterans programs. Is that true or is that not true?”

THE FACTS: Sanders’ accusation is misleading. He suggests that Biden’s record shows that he would be hostile to preserving Social Security. In fact, Biden’s position has actually evolved over his long public career as a centrist senator. Cutting Social Security is not what he is proposing now.

Biden’s campaign has pointed to a long list of legislation he supported that increased Social Security benefits. But as an influential legislator who had a hand in passing major bills, he also was willing to enter negotiations with Republicans by considering a reduction in cost-of-living increases.

Often these changes were presented as a way to cut costs that would save the program.

During a 1996 candidate debate, for example, he floated the possibility of reducing cost-of-living increases and raising the retirement age to 68.

Sanders and his allies have also circulated video footage, news stories and transcripts of Biden’s past remarks. But in some cases, what appears to be a sweeping statement by Biden lack crucial context.

One of the principal examples is a clip from a 2018 speech in which Biden appeared to discuss in favorable terms then-House Speaker Paul Ryan’s comments that a rising deficit demanded action on the popular entitlement programs. However, video, circulated on Twitter by a top Sanders adviser, used only a snippet of Biden’s remarks and avoided his larger criticism over how Ryan handled the 2017 tax cuts and subsequent budget debates.

Other widely distributed videos of Biden as a U.S. senator from Delaware in 1995 and presidential candidate in 2007 show him explaining his support for a more austere federal budget, including putting Social Security and Medicare “on the table.”

“When I argued that we should freeze federal spending, I meant Social Security, as well,” Biden said during a 1995 speech on the Senate floor. “I meant Medicare and Medicaid. I meant veterans’ benefits. … And I not only tried it once, I tried it twice, I tried it a third time and I tried it a fourth time.”

The remarks were delivered in support of a federal balanced budget amendment that ultimately failed to win approval and did not relate directly to legislation that would have cut or frozen Social Security spending — or any other specific program. Yet as Biden himself acknowledged at the time, Social Security would likely have faced cuts if such a measure had been approved. 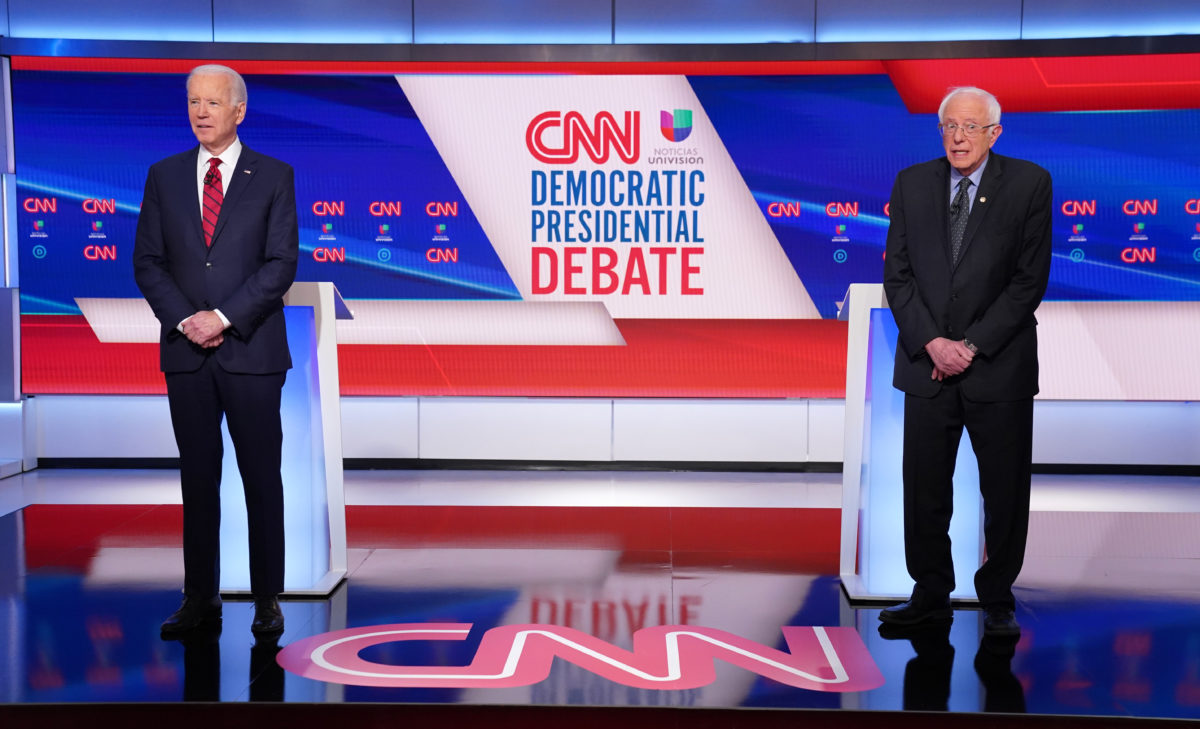 Democratic U.S. presidential candidates former Vice President Joe Biden and Senator Bernie Sanders stand together at the start of 11th Democratic candidates debate of the 2020 U.S. presidential campaign, held in CNN’s Washington studios without an audience because of the global coronavirus pandemic, in Washington, U.S., March 15, 2020. Photo by Kevin Lamarque/Reuters.

As the Democratic Party moved leftward — a development that tracks along ever-widening income and wealth inequality — Biden has moved with it. His 2020 campaign platform now calls for raising taxes on upper-income households to shore up Social Security and expanding benefits for some of the oldest seniors.

“There will be no compromise on Medicare and Social Security, period,” Biden said Jan. 20 in Des Moines, Iowa.

SANDERS: “I voted against the bailout because I believed that the illegal behavior being done by the people on Wall Street should not be rewarded by a bailout. … The Fed gave trillions and trillions of dollars in zero interest loans to every financial institution in this country and central banks all over the world. That was essentially a grant.”

THE FACTS: Sanders is mischaracterizing the steps taken by the Federal Reserve and the stimulus efforts by the Bush and Obama administrations as merely giveaways to banks and Wall Street. It’s true that banks disproportionately benefited from the bailout, but the layoffs and foreclosures of that time would have been even worse without the government’s fiscal and monetary intervention.

First, the Fed cut the interest rate that banks charge each other for overnight loans to near-zero in late 2008 as the economy was cratering. It also bought government debt and mortgage-backed securities that expanded the central bank’s balance sheet to historic highs. These were not grants as Sanders suggests, but efforts to increase the flow of money into the U.S. economy in order to halt the downturn and boost hiring, business investment and consumer spending.

Second, Sanders suggests that efforts such as the Troubled Asset Relief Program were in spirit rewarding bankers who should have been criminally prosecuted. But the loans and other initiatives stemming from TARP were about stabilizing the financial markets and other sectors of the economy. Biden correctly noted that failing to stabilize those institutions could have made the situation even bleaker for everyday Americans.

BIDEN: “I’m taking all the precautions. I make sure I don’t touch my face.”

Left: Democratic U.S. presidential candidates former Vice President Joe Biden and Senator Bernie Sanders do an elbow bump in place of a handshake as they greet other before the start of the 11th Democratic candidates debate of the 2020 U.S. presidential campaign, held in CNN's Washington studios without an audience because of the global coronavirus pandemic, in Washington, U.S. March 15, 2020. Photo by Kevin Lamarque/Reuters.