AP FACT CHECK: Trump, Dems and the state of disunion

WASHINGTON — President Donald Trump says the world is witnessing a great American economic revival that he brought on by reversing course from the Obama years. Yet the economy is not so different from the robust one he inherited and disparages at every turn.

Trump’s State of the Union speech came packed with assertions tailor-made for his reelection bid, during a week when his acquittal in his Senate impeachment trial emboldened him. The leading Democrats vying to replace him tangled in a debate Friday night before New Hampshire voters try to give shape to a nomination race mangled in Iowa.

A sampling of rhetoric of the past week:

TRUMP: “From the instant I took office, I moved rapidly to revive the U.S. economy — slashing a record number of job killing-regulations, enacting historic and record-setting tax cuts, and fighting for fair and reciprocal trade agreements. … If we had not reversed the failed economic policies of the previous administration, the world would not now be witness to America’s great economic success.” — State of the Union address Tuesday.

THE FACTS: The U.S. economy indeed is healthy. But gains have largely followed along the same lines of an expansion that started more than a decade ago under President Barack Obama. And Trump never quite managed to achieve the liftoff he promised during the 2016 election.

Total economic growth last year was 2.3%. That is roughly in line with the average gains achieved after the Great Recession, and a far cry from growth of as much 3%, 4% or more that Trump told voters he could deliver. The president has also claimed that the U.S. added factories during his presidency after nearly 60,000 manufacturing establishments were shuttered during the previous two administrations. But increases in the number U.S. factories began in 2013, more than four years before the start of Trump’s presidency, according to Labor Department figures.

The tax cuts did temporarily boost growth in 2018 as deficit spending increased. But the administration claimed its tax plan would increase business investment in ways that could fuel lasting growth. For the past three quarters, business investment has instead declined.

It’s too soon to judge the impact of the updated trade agreement with Mexico and Canada as well as the pact with China. But Trump premised his economic policy on wiping out the trade gap. Instead, the trade deficit has worsened under Trump.

TRUMP: “Before I came into office, if you showed up illegally on our southern border and were arrested, you were simply released and allowed into our country, never to be seen again. My administration has ended catch-and-release. If you come illegally, you will now be promptly removed.” — State of the Union.

THE FACTS: Not true. Under previous administrations, Mexicans were quickly returned back over the U.S.-Mexico border, while others were held in detention until they were deported. Some migrants from other countries were released into the United States to wait out their immigration cases.

Despite Trump’s claims that all migrants are now “promptly” removed, there is a 1 million immigration court case backlog, which means many migrants wait up to three years before a court hearing in front of a judge who will determine whether someone is deported. After a judge rules a migrant deported, travel papers must be obtained, which often leads to further delays.

As for ending “catch and release,” Trump actually expanded that policy last year during a surge in migrants, releasing thousands of migrants who flooded shelters along the border. The surge has since passed, so fewer people are being held and fewer would need to be released. Because an effort by immigration officials to detain children indefinitely was blocked by a judge, children are still released into the country.

TRUMP: “Thanks to our bold regulatory reduction campaign, the United States has become the number one producer of oil and natural gas, anywhere in the world, by far.” — State of the Union.

That’s owing to a U.S. shale boom that has driven production up since 2011, not to deregulation or any other new effort by the Trump administration.

TRUMP: “The USMCA will create nearly 100,000 new high-paying American auto jobs, and massively boost exports for our farmers, ranchers and factory workers.” — State of the Union.

THE FACTS: Don’t count on that.

The U.S. International Trade Commission examined the U.S.-Mexico-Canada deal in an April report. The report estimated that the deal would add only 28,000 auto industry jobs six years after the deal is put in place. Separately, government officials are quoted in the report saying they believe the sector would add 76,000 jobs based on their methodology.

THE FACTS: Trump is being misleading with numbers to tarnish his predecessor’s record. It’s not clear what he means by “working-age.” But the total size of the U.S. labor force shows that the president is wrong.

During the eight years of Obama’s presidency, the labor force rose by 5.06 million, according to the Labor Department. The improvement reflected a rebounding economy from the Great Recession and population growth.

As the unemployment rate has fallen, more people are finding it attractive to work and are joining the labor force. This has enabled the labor force to climb by an impressive 4.86 million in just three years under Trump. 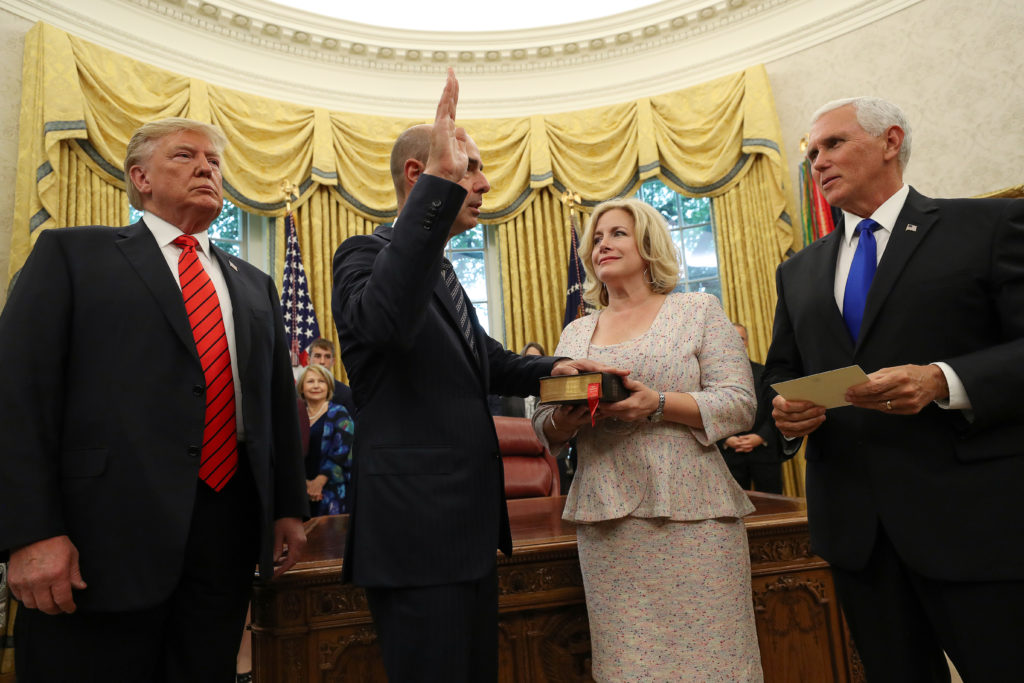 U.S. President Donald Trump looks on during the ceremonial swearing-in for Labor Secretary Eugene Scalia with Vice President Mike Pence administering the oath of office and Scalia’s wife, Patricia, holding a Bible during a ceremony at the White House in Washington, U.S., September 30, 2019. Photo by Leah Millis/Reuters.

TRUMP: “For the first time in 51 years, the cost of prescription drugs actually went down.” — State of the Union.

THE FACTS: Prices for prescription drugs have edged down, but that is driven by declines for generics. Prices for brand-name medications are still going up, although more moderately.

Nonpartisan government experts at the Department of Health and Human Services reported last year that prices for pharmacy prescriptions went down by 1% in 2018, the first such price drop in 45 years.

The department said the last time retail prescription drug prices declined was in 1973, when they went down by 0.2%.

TRUMP: “We will always protect patients with preexisting conditions.” — State of the Union.

THE FACTS: That’s a promise, not a guarantee.

The Trump administration is backing a lawsuit by conservative-led states that would overturn the entire Obama health law, including the Affordable Care Act’s guarantees that people cannot be turned down or charged more for insurance because of preexisting medical problems.

Trump and congressional Republicans have pledged they will protect people with preexisting conditions, but they have not specified how they would do that.

Estimates of how many people could potentially be affected if the law’s protections for preexisting conditions are eliminated range from about 54 million working-age adults, in a study last year from the Kaiser Family Foundation, to as many as 133 million people, according to a 2017 government study that also included children. 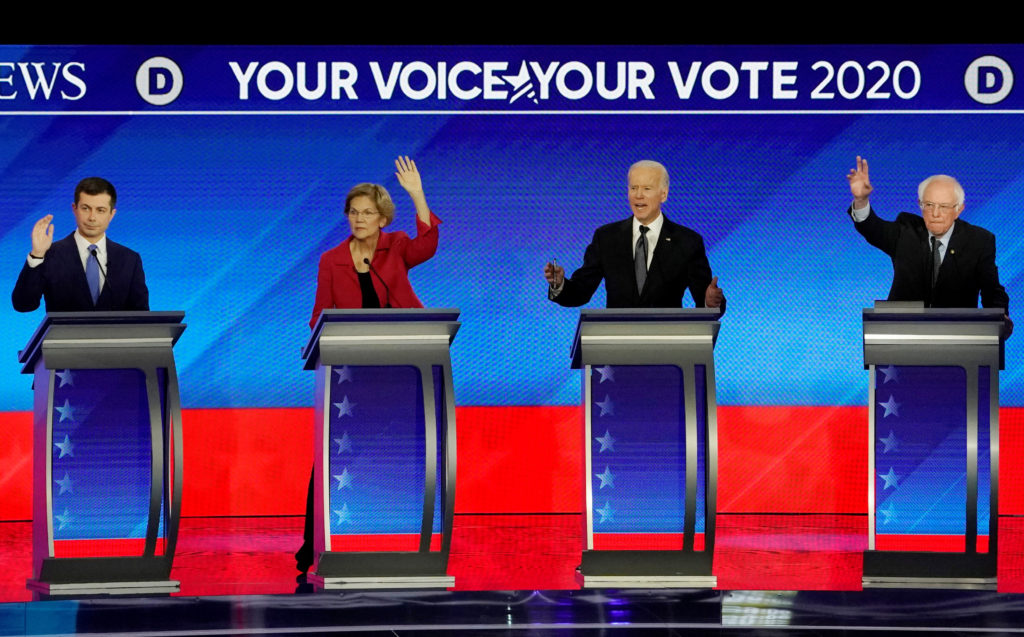 Sen. AMY KLOBUCHAR of Minnesota, on rival Pete Buttigieg’s evolution on health care: “And Pete, while you have a different plan now, you sent out a tweet just a few years ago that said henceforth, forthwith, indubitably, affirmatively, you are for ‘Medicare for All’ for the ages.”

BUTTIGIEG: “Just to be clear, the truth is that I have been consistent throughout in my position on delivering health care for every American.”

THE FACTS: Klobuchar Is right. Before he launched his presidential campaign, Buttigieg sounded supportive of “Medicare for All.” He isn’t now.

In February 2018, he was involved in a Twitter exchange as liberals were pressing Democratic politicians to back a government health plan.

“When/where have you ever heard me oppose ‘Medicare for All?’” he asked in a Feb. 17, 2018, response to an activist’s query. A day later, he tweeted out a column he wrote as a Harvard University senior, saying he’d “been on record on this one since 2004.”

On the same day, he sent out a separate tweet: “Gosh! Okay … I, Pete Buttigieg, politician, do henceforth and forthwith declare, most affirmatively and indubitably, unto the ages, that I do favor ‘Medicare for All,’ as I do favor any measure that would help get all Americans covered. Now, if you’ll excuse me, potholes await.”

FORMER VICE PRESIDENT JOE BIDEN, saying Obama asked him to get 156,000 troops out of Iraq: “I did that.”

THE FACTS: True, but that’s not the end of the story. Obama asked Biden to take the lead in efforts to withdraw troops and coordinate efforts to maintain stability in Baghdad. What Biden did not mention was that some of the troops had to go back.

Obama and Biden failed to win agreement from the Iraqi government to keep a limited number of U.S. troops there after December 2011. That was the deadline for a complete U.S. pullout under a deal negotiated by the Bush administration in late 2008. Biden was still vice president when Obama was compelled to return American troops to Iraq in 2014 after the rise of the Islamic State extremist group.

THE FACTS: Corporate profits are high, but they’re not at record levels.

TRUMP, on House Speaker Nancy Pelosi, D-Calif., ripping up his State of the Union remarks: “I thought it was a terrible thing when she ripped up the speech. First of all, it’s an official document. You’re not allowed. It’s illegal what she did. She broke the law.” — remarks Friday.

THE FACTS: No laws were broken, legal experts say. That’s because it was not an original government document, but Pelosi’s copy of the speech.

Steven Aftergood, a records expert at the private Federation of American Scientists, said: “Legally, this is a nonissue. Pelosi was expressing contempt for the president’s speech, and her views are constitutionally protected.” He said her torn-up pieces of the speech might themselves be considered a new record of historical value.

Laurence Tribe, a constitutional law professor at Harvard University, said Pelosi did not violate 18 U.S. Code Section 2071. That’s the federal law defining the deliberate destruction of an official record that has been filed with a court or other government agency — a felony punishable by a prison term and by forfeiture of office.

Heidi Kitrosser, a law professor at the University of Minnesota, said: “This is not an archival document. … This is one of many, many, many copies of President Trump’s speech and Nancy Pelosi is free to do with it whatever she will.”

Kitrosser added that any disagreement with Trump’s speech is protected by the First Amendment “and in Pelosi’s case, under the speech and debate clause of the Constitution.”

EDITOR’S NOTE — A look at the veracity of claims by political figures.

Left: Speaker of the House Nancy Pelosi (D-CA) rips up the speech of U.S. President Donald Trump after his State of the Union address to a joint session of the U.S. Congress in the House Chamber of the U.S. Capitol in Washington, U.S. February 4, 2020. REUTERS/Jonathan Ernst - RC23UE9JQYCY