WASHINGTON — President Donald Trump took credit for a supposed new decision by NATO members to increase military spending, though there was no evidence of that.

And after hinting Thursday that the alliance is in trouble, he asserted that his aggressive demands at this week’s summit had suddenly turned NATO into a “fine-tuned machine” that will treat the U.S. “much more fairly” — hyperbole that sent U.S. allies scrambling to make clear that NATO unity wasn’t at risk.

Here’s a look at how Trump’s statements at a news conference in Brussels compare with the facts:

TRUMP: “Everyone’s agreed to substantially up their commitment. They’re going to up it at levels they’ve never thought of before.”

“I can tell you now that NATO now is really a fine-tuned machine. People are paying money that they’ve never paid before. They’re happy to do it. And the United States is being treated much more fairly.”

THE FACTS: There’s no outward sign that Trump’s aggressive posturing in recent days has changed much for the alliance other than bruise its veneer of unity.

NATO members had already agreed in 2014 to stop cutting their military budgets and set a goal of moving “toward” spending 2 percent of their gross domestic product on their own defense by 2024.

On Wednesday, Trump roiled the summit by calling on NATO members to more than double their spending goal, suggesting a new benchmark that would have them devote 4 percent of their economy to defense. (NATO lists the U.S. as spending an estimated 3.5 percent of its GDP on its military budget this year.)

But by Thursday, leaders from France, Germany and Italy offered no support for Trump’s claim that he had wrung new concessions out of the alliance on their military spending. “I made clear that we know that we have to do more and that we have been doing so for quite a while,” said German Chancellor Angela Merkel. “That turning point has long been initiated.”

French President Emmanuel Macron said allies had reaffirmed in their communique their intention to meet the goal of 2 percent by 2024 and no more.

In his press conference, Trump even seemed to acknowledge that there was no new commitment, though he said NATO members might spend “at a much faster clip” than before: “We will go to much higher than 2 percent into the future, but right now we’re getting people up to 2 percent.”

NATO Secretary General Jens Stoltenberg did allow that the allies felt a “new sense of urgency, and all allies agreed to redouble their efforts.” 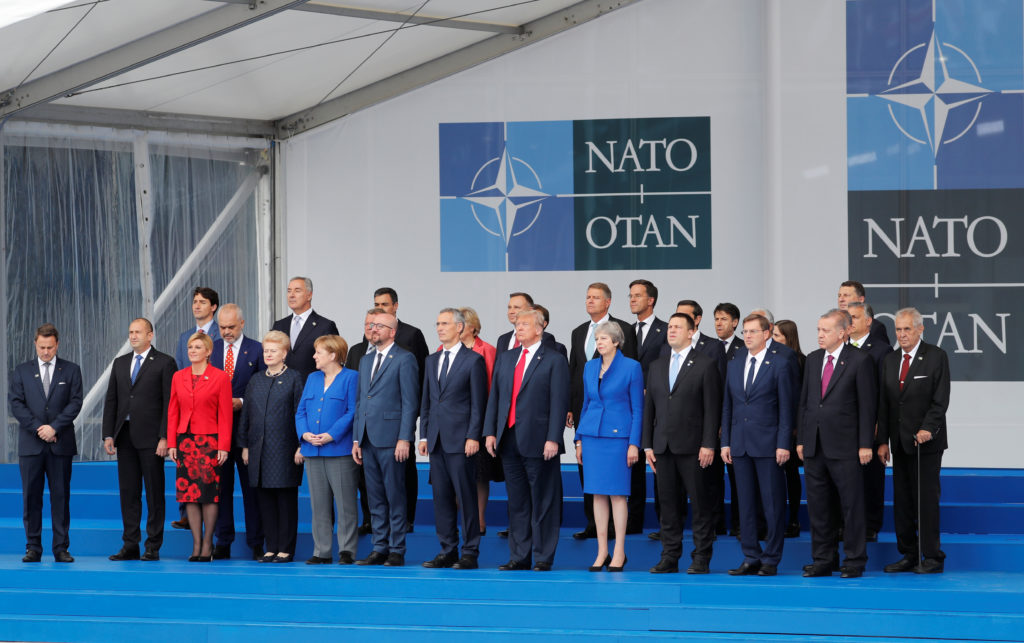 NATO leaders pose for a family photo at the start of the NATO summit in Brussels, Belgium, on July 11, 2018. Photo by Yves Herman/Reuters

TRUMP: “I told people that I’d be very unhappy if they didn’t up their commitments very substantially because the United States has been paying a tremendous amount, probably 90 percent of the costs of NATO.”

THE FACTS: Not true. The U.S. military budget comprises about 70 percent of the military spending of all NATO countries together, not 90 percent — and that’s for worldwide military commitments, not just Europe.

NATO has a largely administrative budget of about $3 billion for its headquarters and certain civilian and military costs. The U.S. share of that is capped at 22 percent. The United States may bear higher costs of certain military missions under the NATO banner.

TRUMP: “One of the states we won, Wisconsin __ I didn’t even realize this until fairly recently — that was the one state that Ronald Reagan didn’t win when he ran the board his second time. He didn’t win Wisconsin, and we won Wisconsin.”

THE FACTS: Trump has said this before; it’s not true. Reagan won Wisconsin in the 1980 and 1984 presidential elections.

Left: President Donald Trump takes questions from the media during a news conference after participating in the NATO Summit in Brussels, Belgium. Photo by Kevin Lamarque/Reuters