WASHINGTON (AP) — Contrary to a statement by President Donald Trump, Democrats are not aiming to kill cows, Iowa farmers or you.

Trump’s fictional take on murderous Democrats, which he played for laughs at an Iowa rally, came during a week dominated by the Senate impeachment trial and the multitude of distortions it produced. A look at recent rhetoric about impeachment, his newly signed trade deal and more:

THE FACTS: No one is coming after cows or people because of the Green New Deal, a plan put forward by some liberal Democrats. It calls for huge spending to retool the economy to break its dependence on fossil fuels. 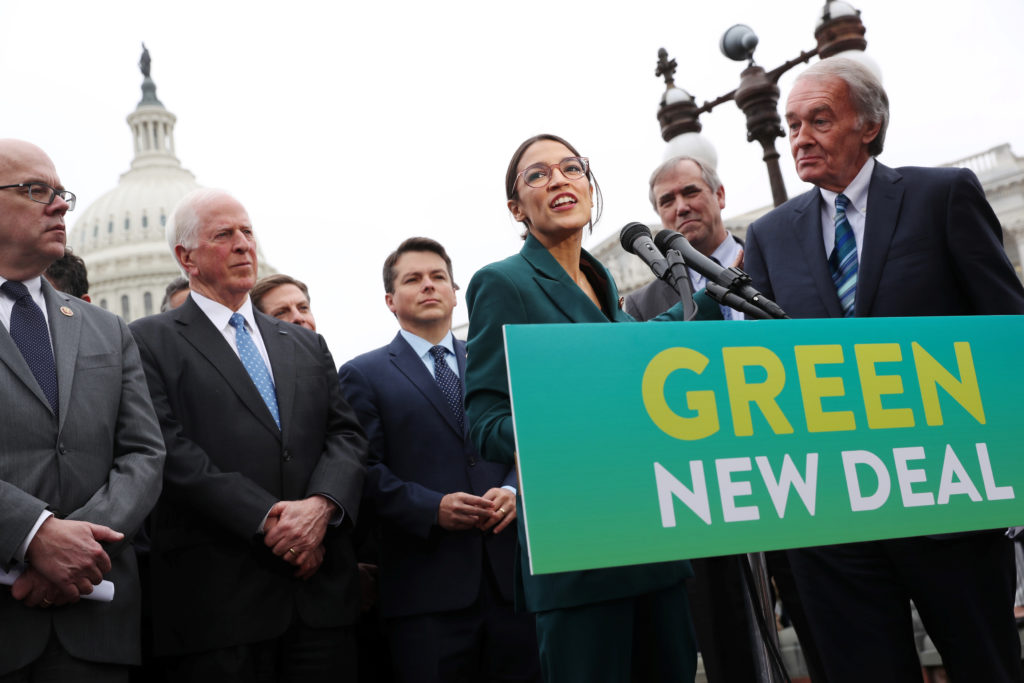 The plan proposes working “collaboratively with farmers” to remove greenhouse gas emissions from agriculture “as much as is technologically feasible” and does not try to force farms off of livestock. Trump is ignoring the plan itself and focusing on an information sheet released, then retracted, by one of the sponsors. It made a joke about banning cows and airplanes.

Trump has further predicted that his trade deals will bring so much business to farmers that they will need more land and tractors. If so, that would presumably increase the slaughter of “wonderful” cows.

THE FACTS: It’s not remotely true. Less than half that many jobs have been added to the entire workforce during Trump’s presidency and his daughter is not responsible for them.

The president is referring to a White House initiative led by Ivanka Trump that has garnered nonbinding commitments from companies to provide 14 million or so training opportunities in the years ahead. Training for a job is not working at a job for money.

There’s no telling how many workers were already going to be trained, absent the initiative. In many cases, the pledge simply confers a presidential seal of approval on what some companies are doing anyway. By having companies sign the pledge, the administration is relying on the private sector to take on more of the financial burden of training workers.

THE FACTS: Automobile manufacturing jobs have not come back fast to Michigan under Trump. They have declined slightly since he took office, according to the Labor Department. 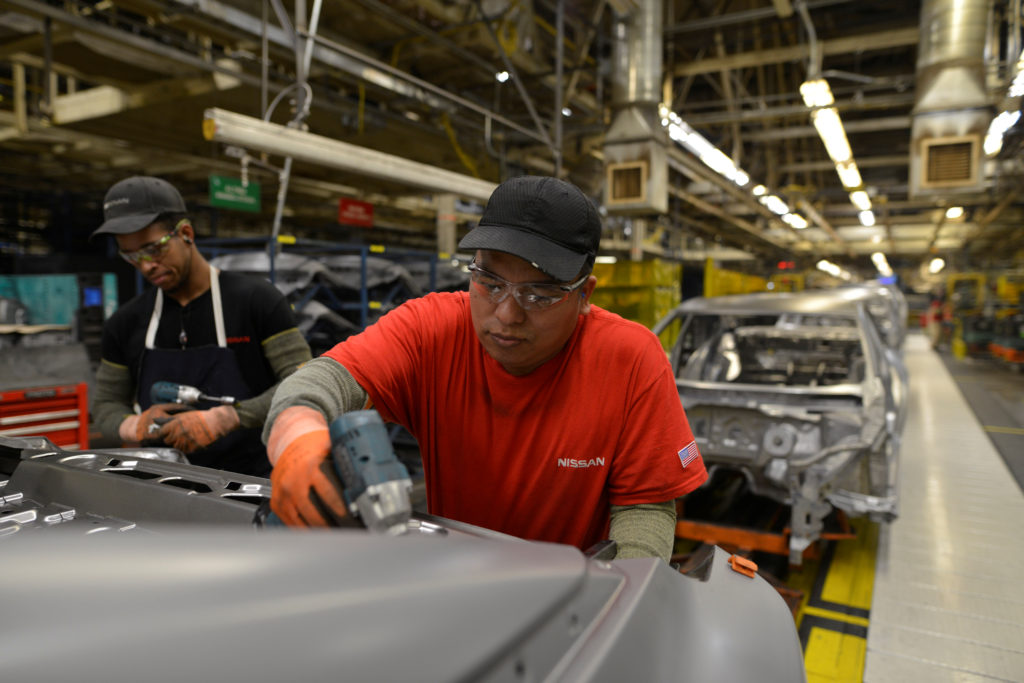 As for his prediction that many more such jobs are coming, that’s difficult to tell.

The three big automakers have altogether announced plans to add over 10,000 jobs in Michigan in coming years. But they’ve also cut or plan to cut thousands of other jobs in the state.

ON economy and trade

TRUMP: “The USMCA is the largest, fairest, most balanced and modern trade agreement ever achieved.” — signing ceremony Wednesday for the United States-Mexico-Canada trade agreement.

THE FACTS: It’s not the largest trade deal ever made. It covers the same three countries as before. In contrast, the Uruguay Round of trade negotiations concluded in 1994 created the World Trade Organization and was signed by 123 countries. The Federal Reserve Bank of Boston found the following year that the WTO’s initial membership accounted for more than 90 percent of global economic output.

TRUMP: The USMCA “will make our blue-collar boom — which is beyond anybody’s expectation — even bigger, stronger, and more extraordinary.” — signing ceremony Wednesday.

THE FACTS: There isn’t a boom for blue-collar workers, and few economists expect the trade pact to add much.

Such workers haven’t done substantially better than everyone else, and some of their gains under Trump have faded in the past year as his trade war hurt manufacturing. The mining and logging industry, for example, which includes oil and gas workers, lost 21,000 jobs last year. Manufacturers have added just 9,000 jobs in the past six months, while the economy as a whole gained more than 1.1 million jobs during that period.

The U.S. economy is still heavily oriented toward services. While factory jobs have grown, other jobs have grown faster, so manufacturing has slightly shrunk as a proportion of the work force since Trump took office.

The independent U.S. International Trade Commission estimated last year that the trade pact would create 49,700 jobs in manufacturing and mining over six years, a fraction of 1% of the existing 13.5 million U.S. jobs in factories and mines.

TRUMP: “More Americans are working today than have ever worked in the history of our country. We’re up to almost 160 million people working. We’ve never even come close to a number like that.” — signing ceremony Wednesday.

THE FACTS: Yes, but that’s driven by population growth. A more relevant measure is the proportion of Americans with jobs, and that is still below record highs.

According to Labor Department data, 61% of people in the United States 16 years and older were working in December. That’s below the all-time high of 64.7% in April 2000.

SENATE DEMOCRATIC LEADER CHUCK SCHUMER: “If the president is acquitted with no witnesses, no documents, the acquittal will have no value because Americans will know that this trial was not a real trial.” — statement Friday.

THE FACTS: Trump can indeed be acquitted by the Senate based on the proceedings as they unfolded. And acquittal would have great value, contrary to Schumer’s assertion, because it would keep Trump in office for the rest of his term. 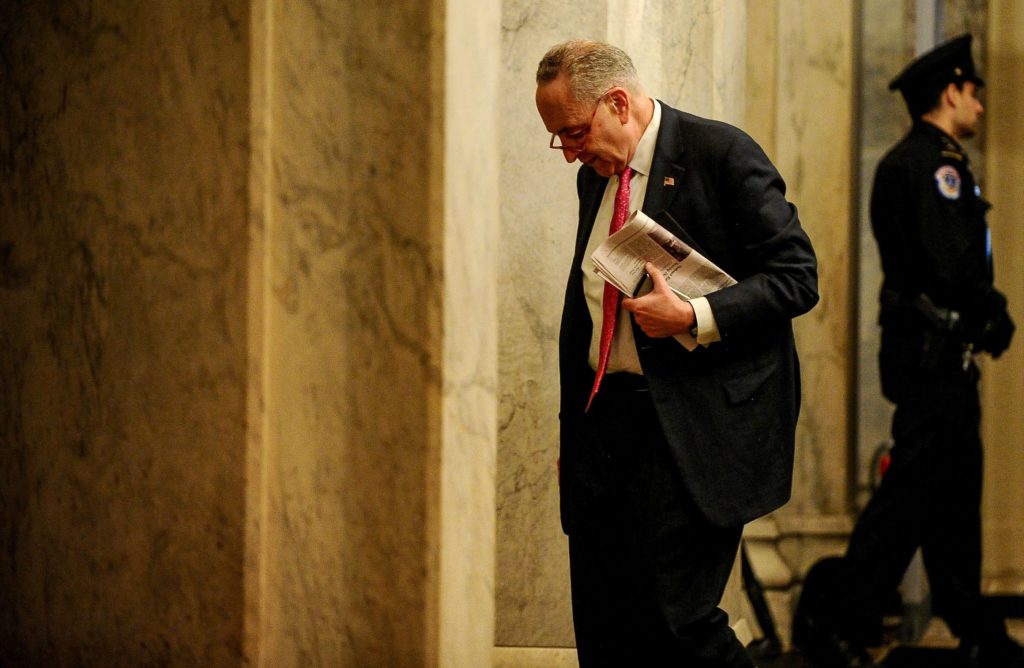 Just as the Constitution gives the House the sole power to impeach, it gives the Senate full responsibility to conduct the trial as it sees fit and to convict or acquit the accused official.

TRUMP: “The Democrat controlled House never even asked John Bolton to testify. It is up to them, not up to the Senate!” — tweet Monday.

THE FACTS: That’s false in its entirety. House Democrats did ask Bolton to testify, and he declined. He did not show up for his deposition. Trump is also incorrect in suggesting impeachment witnesses are the sole province of the House.

House Democrats decided not to pursue a subpoena compelling Bolton to testify in the House proceedings because he threatened to sue, which could have meant an extended court fight. Afterward, however, Bolton signaled his willingness to testify at the Senate trial if he were subpoenaed. 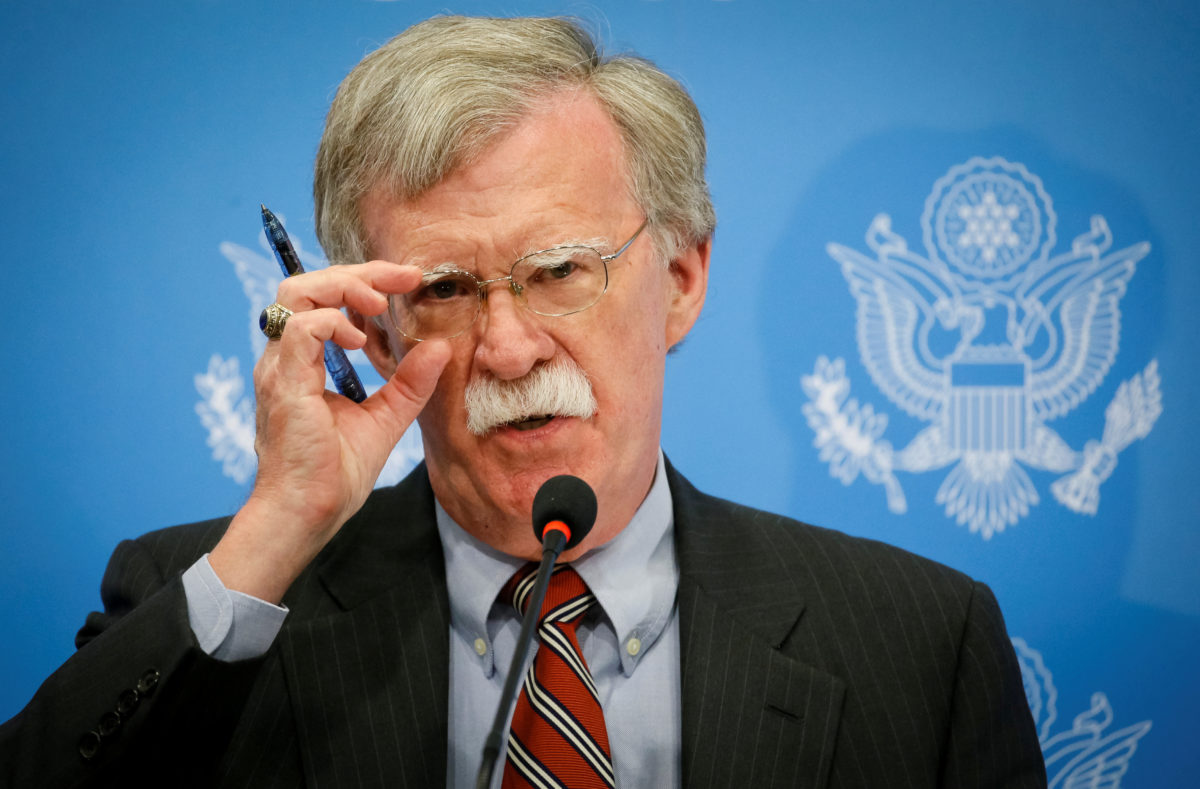 The Senate is empowered to summon witnesses if it chooses, contrary to Trump’s suggestion that “it is up to” the House only. But Republicans gathered enough votes to stop witnesses from being called in the Senate trial.

Bolton’s behind-the-scenes account is in the manuscript of his coming book. It intensified calls from Democrats to make him a witness because it contradicted key assertions by Trump and his defense team’s argument that there was no evidence the president conditioned aid to Ukraine on an investigation of his political rivals.

TRUMP LAWYER JAY SEKULOW, referring to Trump’s July 25 phone call with Ukraine’s leader: “Asking a foreign leader to get to the bottom of issues of corruption is not a violation of an oath.” — trial Monday.

THE FACTS: Trump made no such request in the phone call. And beyond the phone call, there’s scant if any evidence that Trump cared about Ukraine’s history of systemic corruption unless it might involve Hunter Biden, son of former Vice President Joe Biden, a Trump political rival. Hunter Biden was on the board of a Ukrainian energy company when his father was vice president.

In the call, according to the rough transcript released by the White House, Trump repeatedly pressed Ukrainian President Volodymyr Zelenskiy to investigate the Bidens and a groundless conspiracy theory that Ukrainians tried to help Democrats win the 2016 election. Trump didn’t mention Ukrainian corruption.

Trump delayed military aid to Ukraine despite a Pentagon review that found the country had made sufficient progress in cleaning up its legacy of corruption to merit the aid that Congress had approved.

THE FACTS: Trump was not under investigation before he took office.

In fact, Trump says he was told that directly and repeatedly by then-FBI Director James Comey. Comey has said the same publicly.

The FBI counterintelligence investigation dubbed Crossfire Hurricane was underway when Trump took office, but that was into whether his campaign more generally coordinated with Russia to tip the election. Agents were also looking criminally at several Trump aides, but that’s different from Trump being under investigation.

The situation did change after a matter of months, when Trump fired Comey in May 2017. After that happened, the FBI began looking into whether Trump had criminally obstructed justice. Former acting FBI Director Andrew McCabe has said the FBI also began investigating whether Trump might have been acting on behalf of Russia.

SEKULOW: “It was President Zelenskiy who said no pressure.” — trial Monday.

THE FACTS: True, but the statement skirts important context.

In and around the July 25 phone call, Zelenskiy was deferential to Trump as Ukraine, menaced by Russia, tried to keep U.S. military aid flowing. Even so, Ukrainian officials felt pressure for months to do Trump’s bidding, and Zelenskiy himself eventually complained about Trump’s dealings with him. 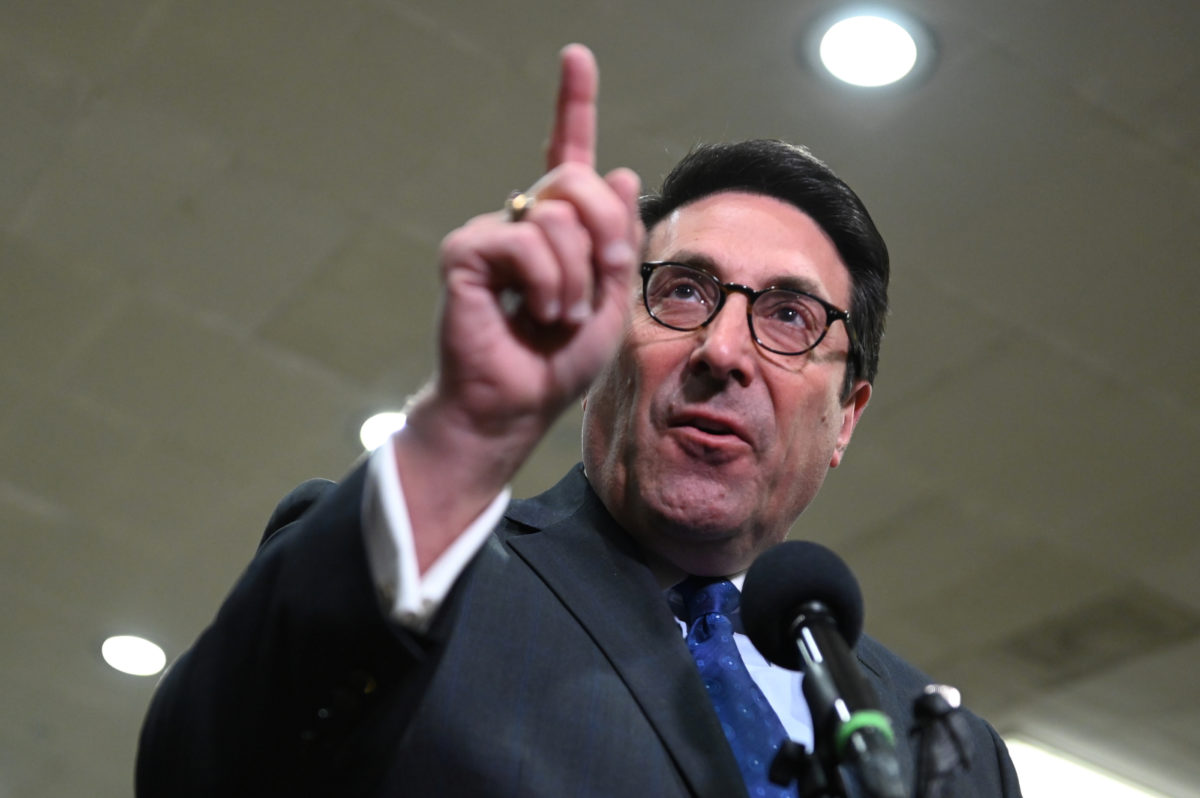 President Donald Trump’s personal attorney Jay Sekulow speaks to reporters during a break in the fourth day of the Senate impeachment trial in Washington on Jan. 24, 2020. Photo by Erin Scott/Reuters.

The Associated Press reported that in May, even before taking office, Zelenskiy knew that vital military support might depend on whether he agreed to investigate Democrats as Trump was demanding.

After the July 25 call, Zelenskiy said he had no problem with Trump’s comments on the call. But by then, Ukrainian officials were wondering why the aid was being held up. And in October, while insisting “there was no pressure or blackmail from the U.S.,” he criticized Trump for blocking the aid and for casting his country as corrupt.

“If you’re our strategic partner, then you can’t go blocking anything for us,” he told Time. “I think that’s just about fairness.”

TRUMP LAWYER MIKE PURPURA, dismissing the idea that military aid was released because Trump’s pressure campaign on Ukraine had been exposed: “On Sept. 11, based on the information collected and presented to President Trump, the president lifted the pause on the security assistance. … Our process gave the president the confidence he needed to approve the release of the security sector assistance. … The president’s concerns were addressed in the ordinary course; the president wasn’t ‘caught’ as the House managers allege.” — trial Monday.

THE FACTS: The “pause” in Ukraine’s military aid was hardly routine, according to testimony heard by House investigators. Moreover, the nonpartisan Government Accountability Office found the aid freeze to be illegal.

House investigators heard about confusion and frustration among senior State Department and Pentagon officials when they learned the congressionally approved aid was being held.

“I was embarrassed that I could not give (Ukraine) any explanation for why it was withheld,” said William Taylor, who was the top U.S. diplomat in Ukraine.

The Defense Department’s Laura Cooper said she and other national security aides unsuccessfully tried to get an explanation for the hold and expressed concern about the White House’s legal authority. The Pentagon had already certified to congressional committees in May that Ukraine had made enough progress on reducing corruption to receive the military assistance.

Catherine Croft, special adviser for Ukraine at the State Department, said national security agencies were unified in support of the aid, and she had never before encountered a time when the White House budget office had injected itself into such a matter.

Top advisers scrambled to get Trump to release the aid through August. Ultimately, on Sept. 11, the funds were suddenly released, after Trump learned of the whistleblower’s complaint and a few days after Democrats opened a congressional investigation of the episode. The GAO later found that the White House budget office “withheld the funds for an unauthorized reason in violation” of the law that requires the executive branch to spend money that is appropriated by Congress.