WASHINGTON — A few months ago, President Donald Trump affirmed that he thought special counsel Robert Mueller acted honorably in the Russia investigation. Now Trump is back in “witch hunt” territory, this time falsely accusing Mueller of committing a crime.

The provocative remark came as the president persisted in misrepresenting trade in multiple dimensions and claimed a record on poverty he didn’t achieve.

Democratic presidential candidates, meantime, stepped forward for their first debates and tripped at times on issues dear to them: climate change, health care and immigration among them.

A recap of the week: 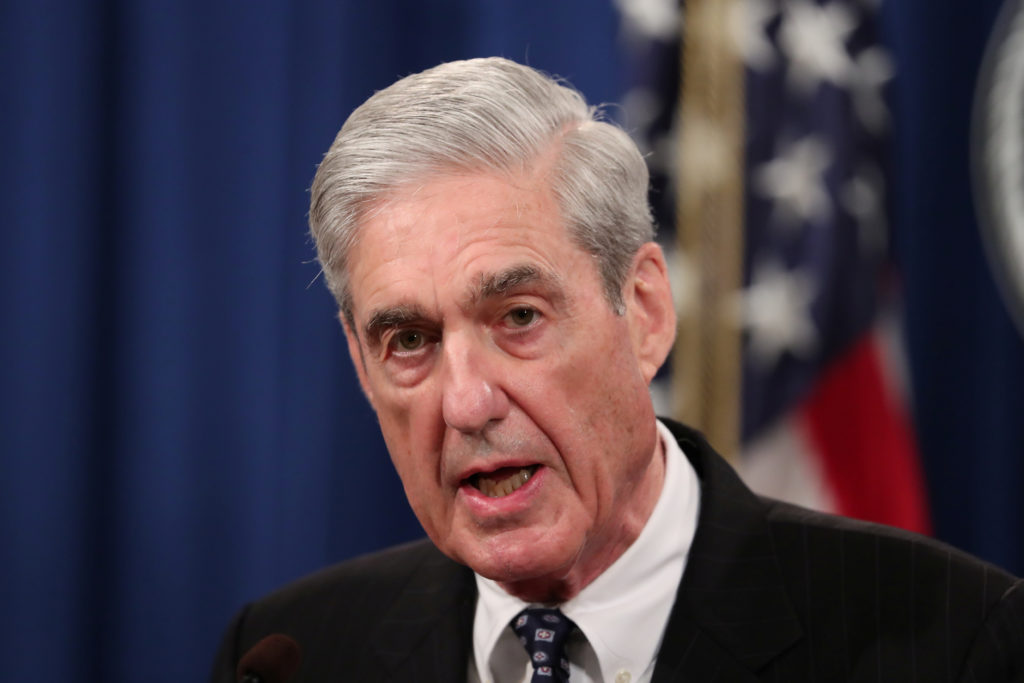 Special Counsel Robert Mueller makes a statement on his investigation into Russian interference in the 2016 U.S. presidential election at the Justice Department in Washington, on May 29, 2019. Photo by Jim Bourg/Reuters

THE FACTS: Not true. Mueller had no role in deleting anti-Trump text messages traded by former FBI counterintelligence agent Peter Strzok and ex-FBI lawyer Lisa Page, and there’s no basis for saying he was involved in anything illegal. Also, the communications didn’t vanish.

Once Mueller learned of the existence of the texts, which were sent before his appointment as special counsel, he removed Strzok from his team investigating potential ties between Russia and the Trump campaign.

The FBI, for technical reasons, was initially unable to retrieve months of text messages between the two officials. But the FBI was ultimately able to recover them and there’s never been any allegation that Mueller had anything to do with that process. 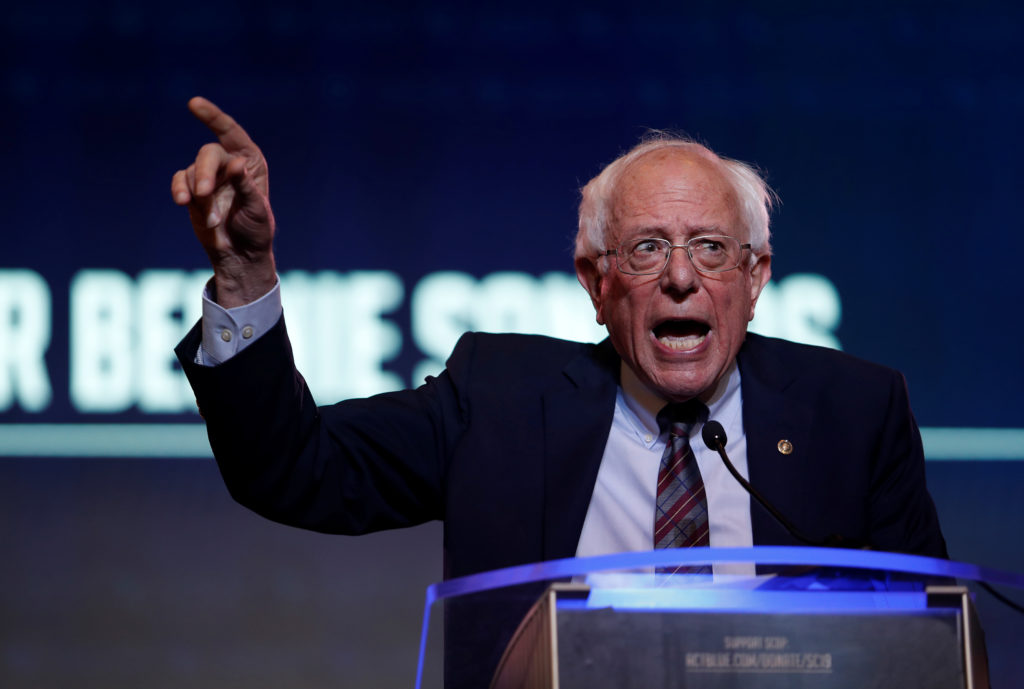 THE FACTS: That statistic is not close to true now. The Vermont senator is referring to 2027, not the present day. He didn’t include that critical context in his statement.

His figures come from an analysis by the Tax Policy Center. That analysis found that in 2027 the top 1% of earners would get 83% of the savings from the tax overhaul signed into law by Trump. Why is that? Most of the tax cuts for individuals are set to expire after 2025, so their benefits go away while cuts for corporations continue. The 2017 tax overhaul does disproportionately favor the wealthy and corporations, but just 20.5% of the benefits went to the top 1% last year. 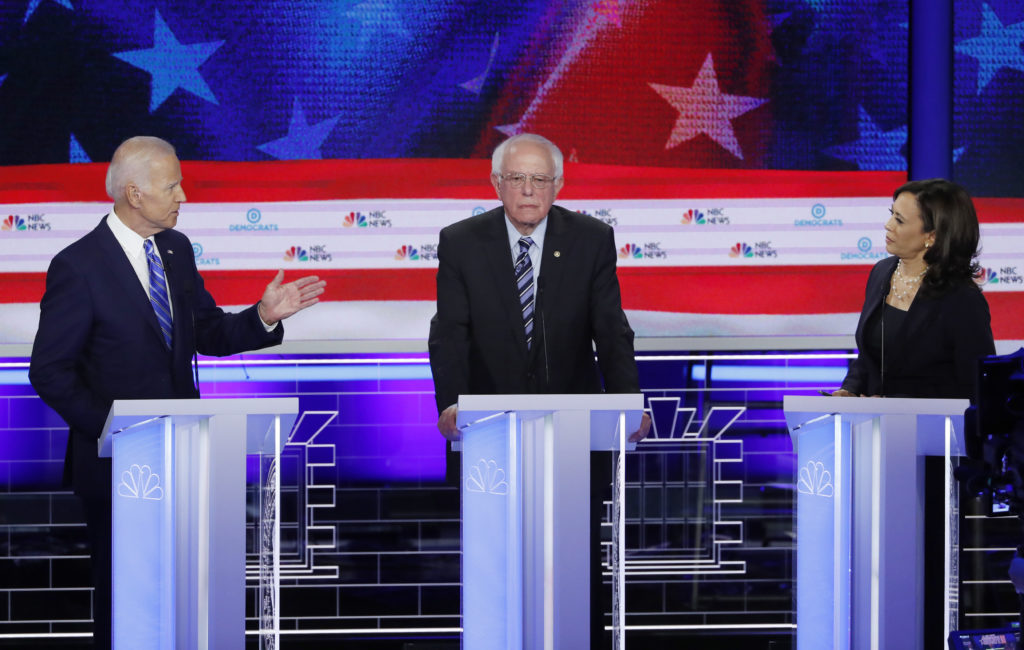 SEN. KAMALA HARRIS: “Vice President Biden, do you agree today that you were wrong to oppose busing in America, then?”

JOE BIDEN: “I did not oppose busing in America. What I opposed is busing ordered by the Department of Education. That’s what I opposed.” — debate Thursday.

The former vice president is claiming that he only opposed the U.S. Education Department’s push for busing to integrate schools because he didn’t want federal mandates forced on local school boards. But in the early and mid-1970s, those were the fault lines in almost every U.S. community, from New Orleans to Boston, where there was stiff opposition to busing. If you were a politician opposing federally enforced busing, you were enabling any local school board or city government that was fighting against it.

As a senator in the late 1970s, Biden supported several measures, including one signed by President Jimmy Carter, that restricted the federal government’s role in forced busing.

Biden told NPR in 1975 that he would support a constitutional amendment to ban court-ordered busing “if it can’t be done through a piece of legislation.” 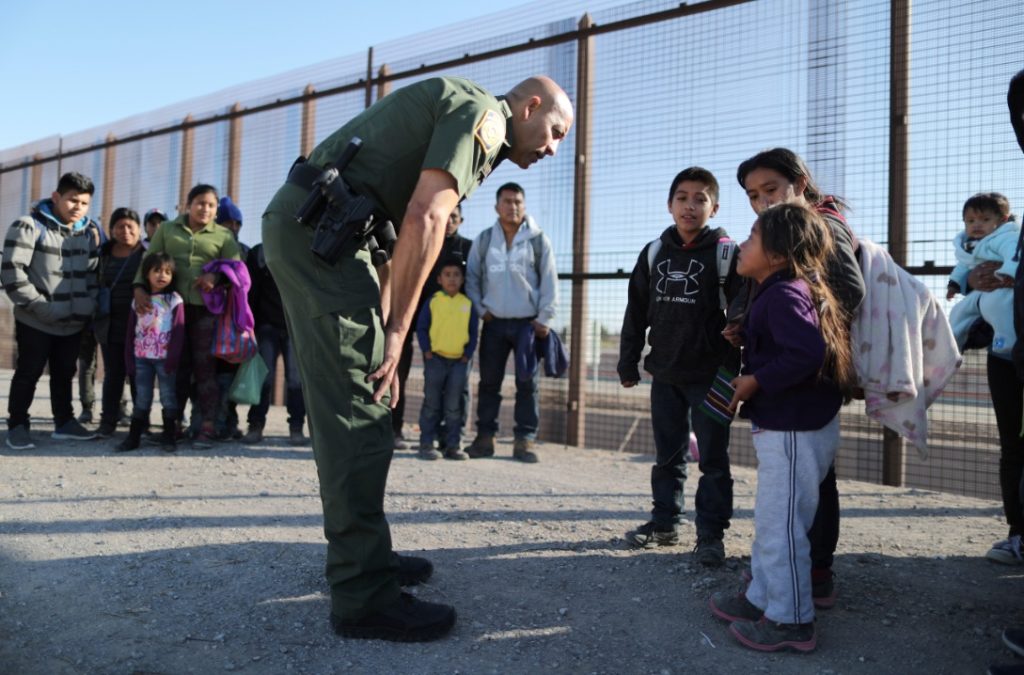 HARRIS: “I will release children from cages.”

JOHN HICKENLOOPER, former Colorado governor: “If you would have ever told me any time in my life that this country would sanction federal agents to take children from the arms of their parents, put them in cages, actually put them up for adoption — in Colorado we call that kidnapping — I would have told you it was unbelievable.” — debate Thursday.

THE FACTS: They are tapping into a misleading and common insinuation by Democrats about Trump placing “children in cages.”

The cages are chain-link fences and the Obama-Biden administration used them, too.

Children and adults are held behind them, inside holding Border Patrol facilities, under the Trump administration as well.

President Barack Obama’s administration detained large numbers of unaccompanied children inside chain link fences in 2014. Images that circulated online of children in cages during the height of Trump’s family separations controversy were actually from 2014 when Obama was in office.

Children are placed in such areas by age and sex for safety reasons and are supposed to be held for no longer than 72 hours by the Border Patrol. But as the number of migrants continues to grow under the Trump administration, the system is clogged at every end, so Health and Human Services, which manages the care of children in custody, can’t come get the children in time. Officials say they are increasingly holding children for 5 days or longer.

HHS facilities are better equipped to manage the care of children. But, facing budget concerns, officials cut activities such as soccer, English classes and legal aid for children in their care.

As for Hickenlooper’s claim about the government forcing those children into unwanted adoption, that is not federal policy. 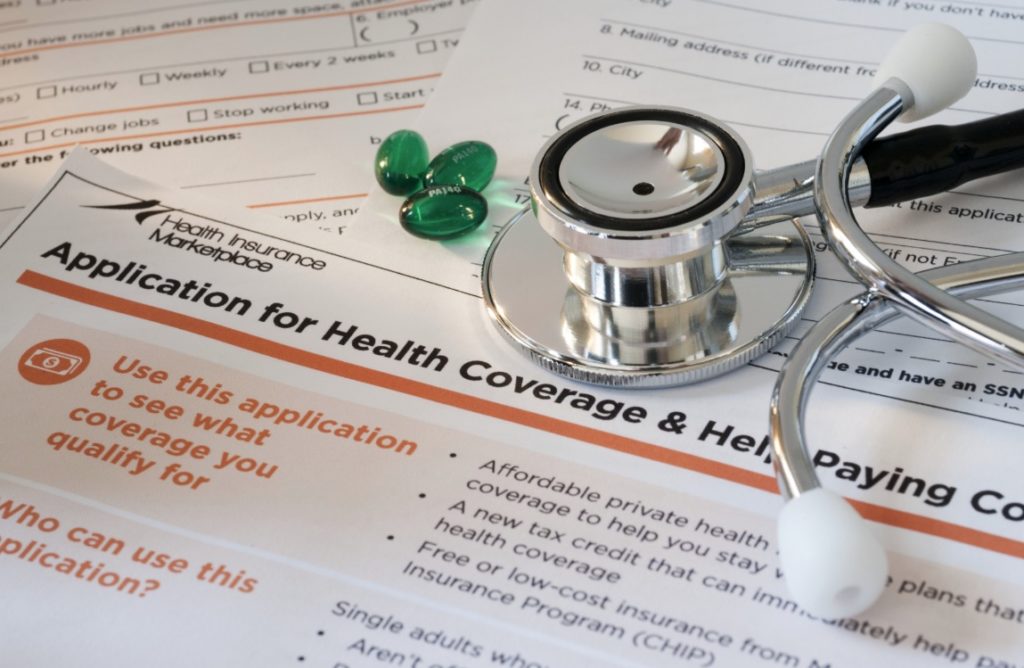 SANDERS: Under “Medicare for All,” ”the vast majority of the people in this country will be paying significantly less for health care than they are now.” — debate Thursday.

THE FACTS: Probably true, but that’s only part of the equation for a family. Sanders’ plan for a government-run health care system to replace private insurance calls for no premiums, and no copays and deductibles. But taxes would have to go up significantly as the government takes on trillions of dollars in health care costs now covered by employers and individuals. Independent studies estimate the government would be spending an additional $28 trillion to $36 trillion over 10 years, although Medicare for All supporters say that’s overstating it.

How those tax increases would be divvied up remains to be seen, as Sanders has not released a blueprint for how to finance his plan. 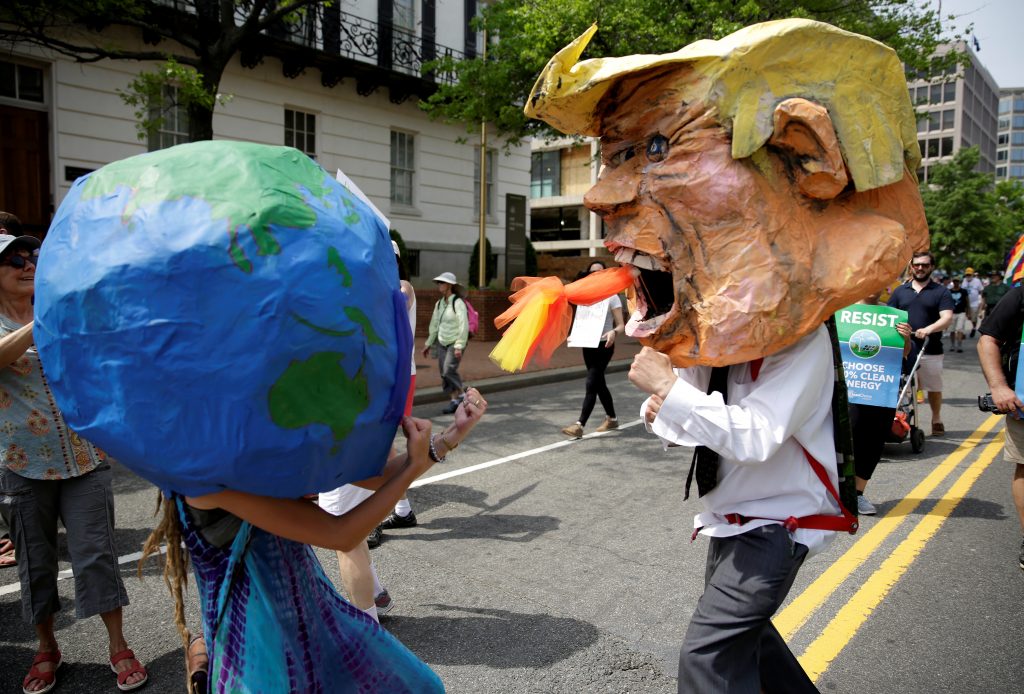 Protesters dressed as the earth and U.S. President Donald Trump pretend to fight during the Peoples Climate March near the White House in Washington, U.S., April 29, 2017. Photo by Joshua Roberts/ Reuters

BIDEN, on Obama’s record: “He is the first man to bring together the entire world — 196 nations — to commit to deal with climate change.” — debate Thursday.

THE FACTS: Not really. Biden is minimizing a major climate deal from 22 years ago, a decade before Obama became president.

In 1997, nations across the world met in Japan and hammered out the Kyoto Protocol to limit climate change in a treaty that involved more than 190 countries at different points in time. That treaty itself stemmed from the 1992 U.N. Framework Convention on Climate Change.

Biden is referring to an agreement that came out of a 2015 meeting in Paris that was the 21st climate change convention meeting.

The Kyoto Protocol only required specific greenhouse gas emission cuts of developed nations, fewer than half the countries in the world. The Paris agreement, where several world leaders pushed hard, including France’s president, has every country agreeing to do something. But each country proposed its own goals.

THE FACTS: Not quite. This answer implies that after 2025 or 2029, when whoever is elected in 2020 leaves office, it will be too late to fight or limit climate change.

That’s a common misconception that stemmed from a U.N. scientific report that came out last fall, which talked about 2030, mostly because that’s a key date in the Paris climate agreement. The report states that with every half a degree Celsius and with every year, global warming and its dangers get worse. However, it does not say at some point it is too late.

“The hotter it gets the worse it gets but there is no cliff edge,” James Skea, co-chairman of the report and professor of sustainable energy at Imperial College London, told The Associated Press. 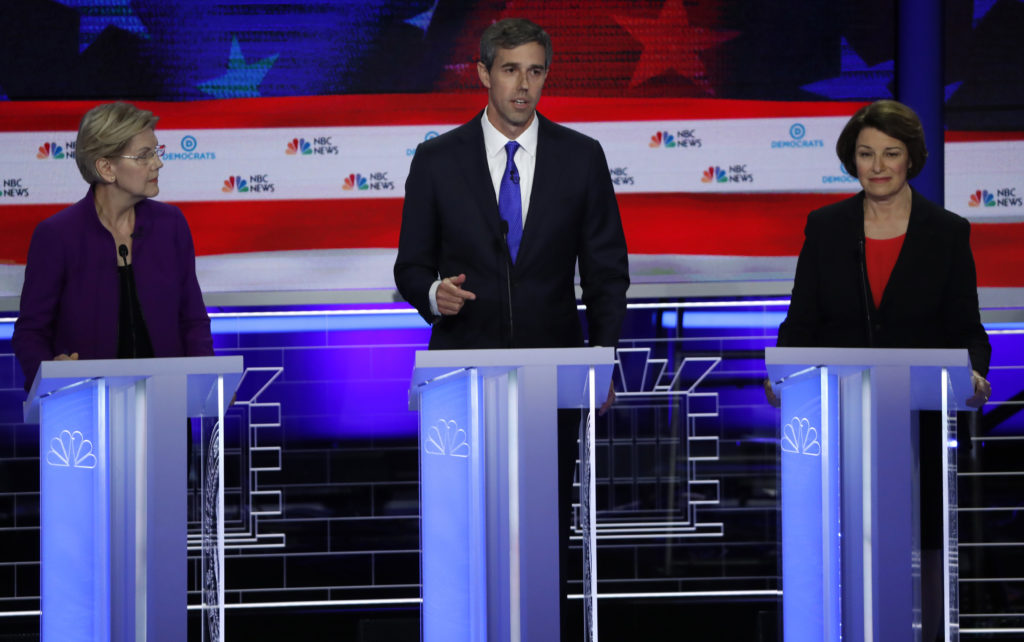 BETO O’ROURKE, a former U.S. representative from Texas, referring to the international climate goal: “If all of us does all that we can, then we’re going to be able to keep this planet from warming another 2 degrees Celsius and ensure that we match what this country can do and live up to our promise and our potential.” — debate Wednesday.

THE FACTS: O’Rourke gets the climate goal wrong.

Since 2009, international summits and the Paris climate agreement list the overarching goal as limiting climate change to no more than 2 degrees Celsius (3.6 degrees Fahrenheit) from pre-industrial times. That’s somewhere between 1850 and 1880, depending on who is calculating.

THE FACTS: Those figures exaggerate the state of income and wealth inequality. While few studies single out the bottom 60%, the Congressional Budget Office calculates that the bottom 80% of Americans have seen their incomes rise 32% since 1979. That is certainly lower than the doubling of income enjoyed by the top one-fifth of income earners. And the richest 1% possess 32% of the nation’s wealth, according to data from the Federal Reserve, not 90%.

THE FACTS: The tax cut wasn’t quite that big: The Joint Committee on Taxation estimates that it will reduce tax revenues by $1.5 trillion over the next decade. And individuals, not corporations, will actually receive the bulk of those cuts — they’re getting $1.1 trillion while businesses get $654 billion, offset by higher tax revenues from changes to international tax law.

The tax cuts did mostly favor richer Americans: The top one-fifth of income earners got 65% of the benefit from the tax cuts in 2018 with just 1% going to the poorest one-fifth, according to the nonpartisan Tax Policy Center. 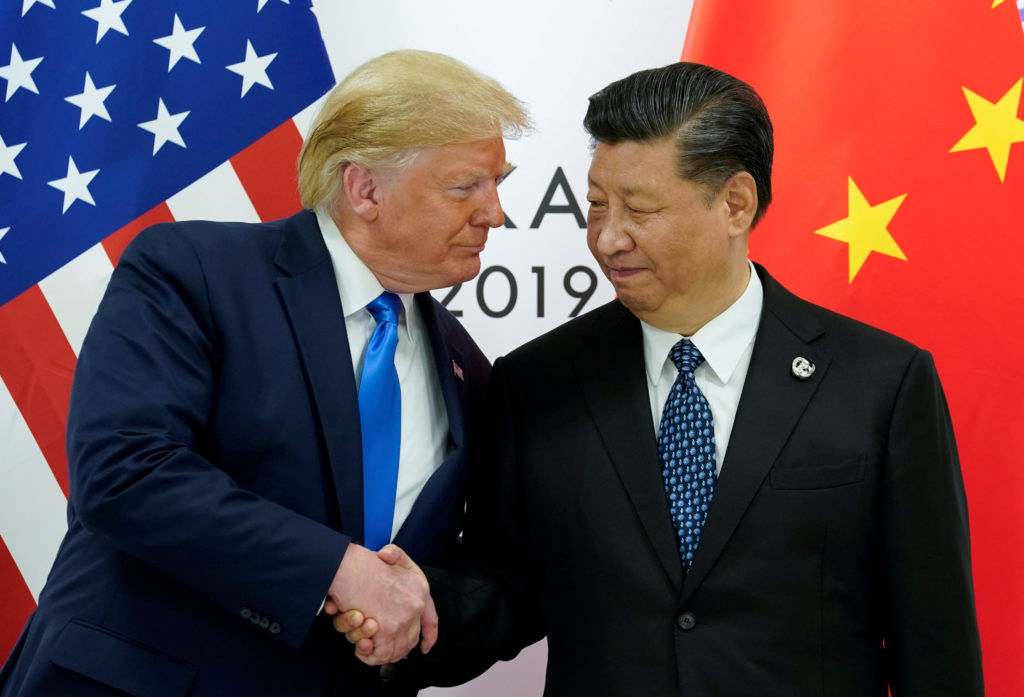 TRUMP on his tariffs on Chinese goods: “Don’t let anyone tell you that we’re paying. We’re not paying, China’s paying for it.” — Fox Business Network interview.

THE FACTS: Americans are paying for it.

Trump refuses to recognize a reality that his own chief economic adviser, Larry Kudlow, has acknowledged. Tariffs are mainly if not entirely paid by companies and consumers in the country that imposes them. China is not sending billions of dollars to the U.S. treasury.

In a study in May , the Federal Reserve Bank of New York, with Princeton and Columbia universities, estimated that tariffs from Trump’s trade dispute with China were costing $831 per U.S. household on an annual basis. And that was based on the situation in 2018, before tariffs escalated. Analysts also found that the burden of Trump’s tariffs falls entirely on U.S. consumers and businesses that buy imported products.

Trump persistently mischaracterizes trade in all its dimensions, giving the wrong numbers for trade deficits, asserting that tariffs did not exist before him, and portraying them inaccurately as a windfall for the government and taxpayers. In that respect, he was correct when he said in the interview, “I view tariffs differently than a lot of other people.”

THE FACTS: Not true. The current poverty rate of 12.3% is not the lowest ever; it’s fallen below that several times over the last half-century, according to the Census Bureau’s official count.

The poverty rate dropped only modestly under Trump’s watch, to 12.3 percent in 2017 — the latest figure available — from 12.7 percent in 2016. At the same time, nearly 40 million Americans remained poor by the Census Bureau’s count, statistically unchanged from 2016.

THE FACTS: This is little more than blind speculation designed to make his own record look better. The data suggest he is wrong.

The U.S. economy added 2.5 million jobs in 2016, which was the final year of President Barack Obama’s term, more than were added in 2017 or 2018 during the Trump administration. The Standard & Poor’s 500 stock index climbed 11% over the course of 2016. Economic growth did slump to 1.6% in 2016, though that hardly suggested a downturn, as growth had been a healthy 2.9% in 2015 — the same level achieved in 2018 when Trump was boasting about having fostered the strongest economy in U.S. history.