WASHINGTON — President Donald Trump’s defense of his actions with Ukraine collides with the known facts and the testimony of witnesses on multiple fronts as the impeachment inquiry moves into a new phase this coming week.

In recent days, Trump has cried foul in ways angry and profane as Democrats set the stage for House Judiciary Committee hearings likely to produce articles of impeachment.

A review of rhetoric on this and other matters over the past week:

THE FACTS: Trump was not deprived of constitutional rights during the House Intelligence Committee hearings because the committee was conducting an investigation, not a trial.

Although the same will be true of the next round of hearings, the chairman of the House Judiciary Committee has invited Trump and his lawyers to appear if he wishes and to make a request to question witnesses.

Trump is also incorrect that the Intelligence Committee hearings only brought forward witnesses hand-picked by the Democrats. Several were invited at the request of Republicans on the committee.

More broadly, each stage of the impeachment inquiry has been guided by majority vote or by long-established institutional practices of Congress as interpreted by the Democratic majority elected by the voters.

The Judiciary Committee hearings will be similar to the process seen in impeachment proceedings that began against Presidents Richard Nixon and Bill Clinton. Nixon resigned, heading off a House impeachment vote; Clinton was impeached by the House and acquitted by the Senate.

If the House impeaches Trump, the Senate trial will look like a normal trial in some respects, with senators as the jury. Arguments would be heard from each side’s legal team for and against Trump’s removal from office.

The Intelligence Committee hearings, in contrast, were like the investigative phase of criminal cases, conducted without the participation of the person under investigation.

TRUMP: “They’ve been working on this for years and years. And I’m curious, why wasn’t it done a long time ago, and also — well, I guess the answer to that is because now I’m president, and we get things done.” — remarks Monday, signing a law to produce a $1 coin commemorating the 100th anniversary of the 19th Amendment guaranteeing women the right to vote.

THE FACTS: It wasn’t “done a long time ago” because the centennial being commemorated wasn’t a long time ago. It’s coming up in nine months. Legislation providing for the coin sped through Congress with bipartisan support.

There is no history here of a president achieving what past presidents failed to do. 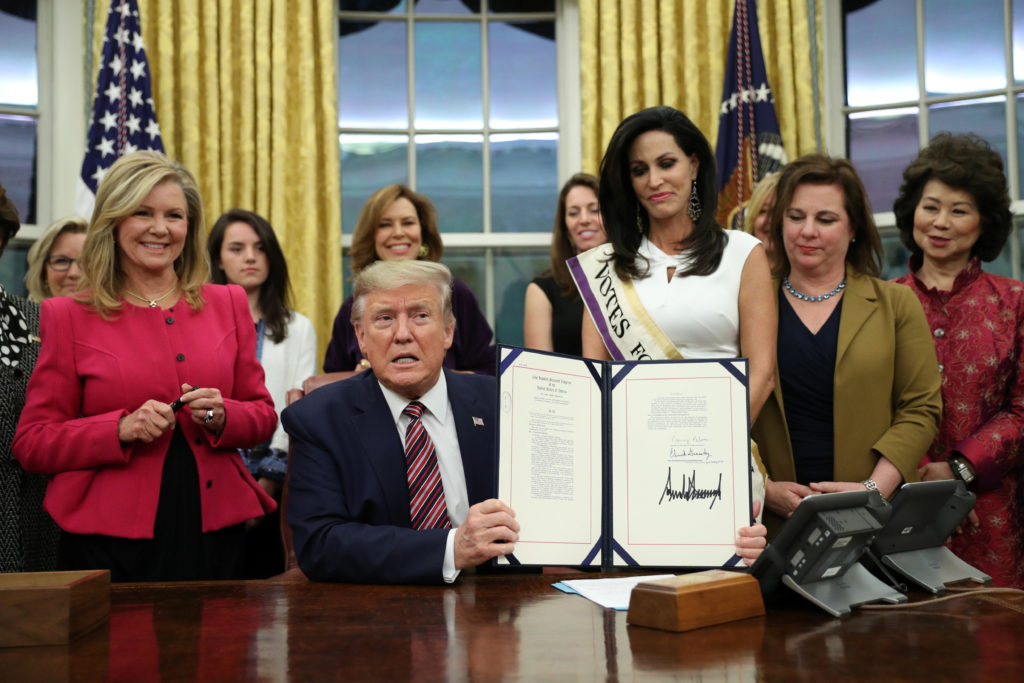 U.S. President Donald Trump displays the Women’s Suffrage Centennial Commemorative Coin Act after signing it during a bill signing ceremony in the Oval Office at the White House in Washington, U.S., November 25, 2019. Photo by Loren Elliott/Reuters.

TRUMP: “I held back the money from Ukraine because it is considered a corrupt country.” — tweet Tuesday.

THE FACTS: There’s scant evidence that Trump voiced concern about systemic corruption in Ukraine until he knew that word had gotten out about his request for a political favor from that country’s president, Volodymyr Zelenskiy

After his first phone call with Zelenskiy, in April, the White House said at the time that Trump had discussed his interest in having Ukraine rein in widespread corruption. But in the recently released rough transcript of the call, he actually did not mention corruption at all.

Trump had $391 million in congressionally approved U.S. military aid withheld from Ukraine from July to September as he and he his aides pressed Ukraine to investigate Democrats, former Vice President Joe Biden and Biden’s son Hunter, who was on the board of an energy company there.

Before Trump froze the aid, the Pentagon had already certified to congressional committees Ukraine had made enough progress on reducing corruption to receive the military assistance. The administration had already approved sending aid to Ukraine nearly 50 times without holding it because of corruption concerns.

Witnesses testified that Trump did not articulate concerns about corruption in Ukraine other than expressing interest into investigations that would benefit him politically.

Trump ultimately released the aid, on Sept. 11, after Congress became aware of what he had done. A few days earlier, congressional committees had begun looking into the matter, and both lawmakers and Trump were aware that a whistleblower had a complaint in motion.

TRUMP: “I wanted to know why nearby European countries weren’t putting up money also.” — tweet Tuesday.

THE FACTS: He’s incorrect that European countries weren’t putting up aid for Ukraine.

Since 2014, the EU and European financial institutions have mobilized more than $16 billion to help Ukraine’s economy, counter corruption, build institutions and strengthen its sovereignty against further incursions by Russia after its annexation of Crimea.

The U.S. is a heavy source of military assistance. But NATO also contributes a variety of military-assistance programs and trust funds for Ukraine. In most such cases, the programs are modest and NATO countries other than the U.S. take the lead. 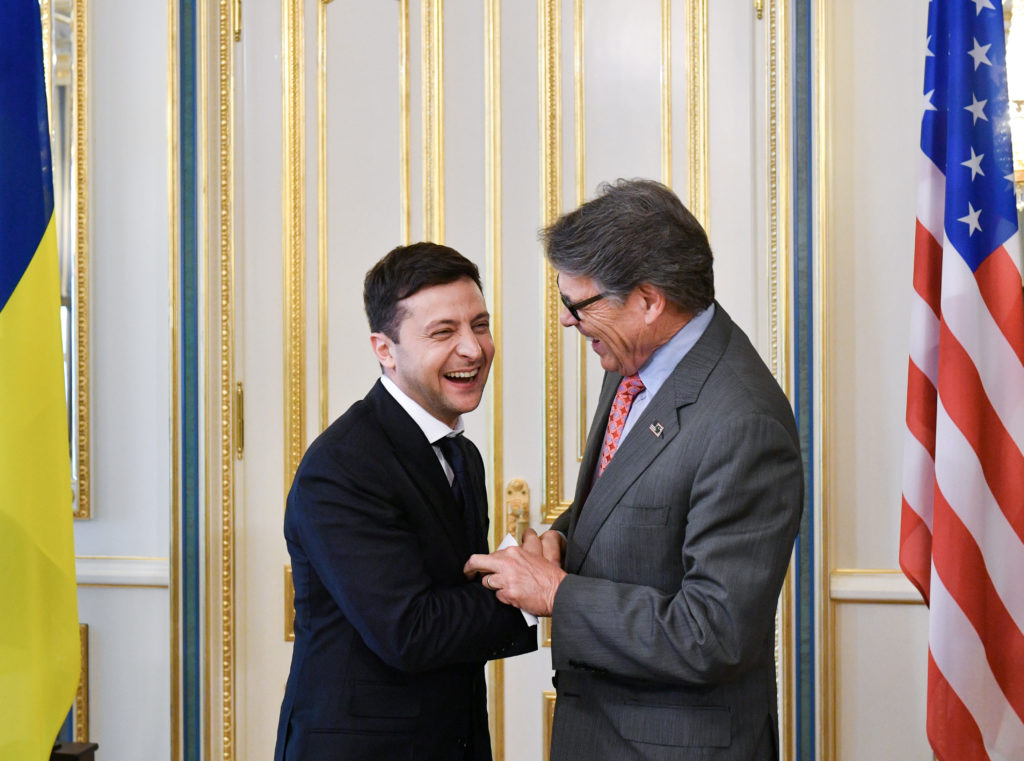 THE FACTS: Trump’s suggestion of a 100% defeat is misleading because his own military commanders say IS still poses a threat. Nor does the death of al-Baghdadi in the Oct. 26 raid mean the threat is gone.

It’s true that IS has lost its caliphate — the large swath of territory it once controlled in parts of Syria and Iraq. But the group remains a threat to reemerge if the conditions that allowed its rise, such as the civil war in Syria and a lack of effective governance in Iraq, are not corrected.

U.N. experts warned in August that IS leaders are aiming to consolidate and create conditions for an “eventual resurgence in its Iraqi and Syrian heartlands.” Gen. Frank McKenzie, head of U.S. Central Command, said after Baghdadi’s death that it would be a mistake to conclude that IS has been defeated.

“It will take them some time to re-establish someone to lead the organization, and during that period of time their actions may be a little bit disjointed,” McKenzie said. “They will be dangerous. We suspect they will try some form of retribution attack, and we are postured and prepared for that.”

The U.S. Defense Intelligence Agency warned this month in an inspector general’s report that IS was expected to rebuild its capability to attack the West now that counterterrorism efforts by U.S. and allied-Syrian Kurdish forces have been reduced. 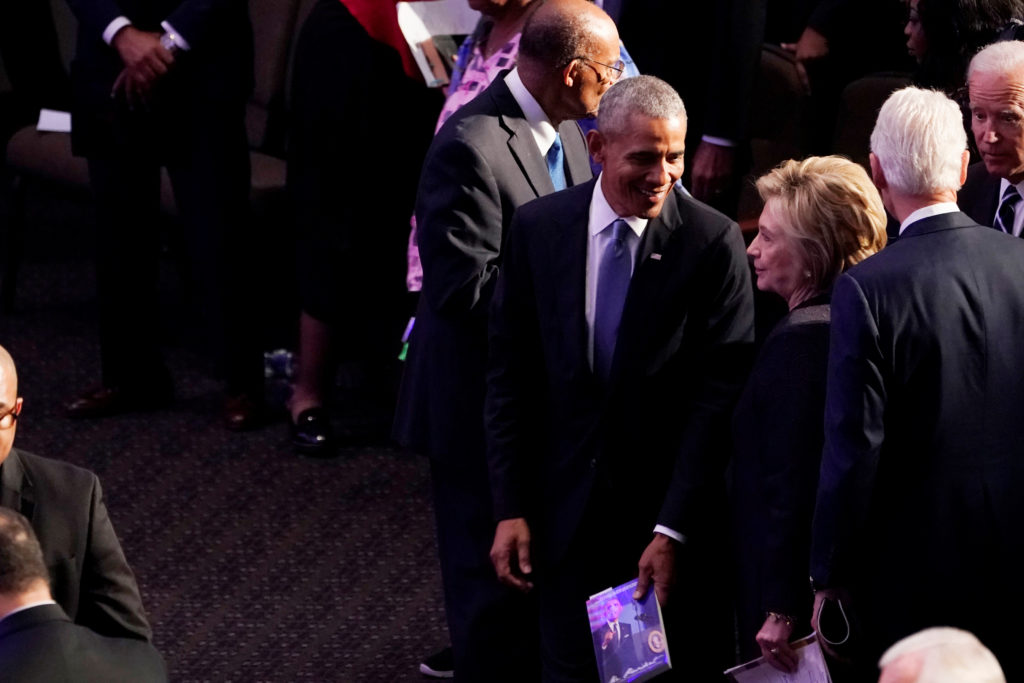 THE FACTS: No, Trump didn’t beat Obama. And there’s no familial Obama dynasty to take on.

Trump beat Jeb Bush in the 2016 GOP primaries, a defeat for a family that produced two presidents, and ensured Hillary and Bill Clinton would not return to the White House when he defeated her in the general election. But he’s never run against Obama.

TRUMP: “By the way CNN’s ratings are terrible. Oops. Look, their light just went off. The lights just went off. … I shouldn’t do it, because we lose a small audience when that happens.” — Florida rally.

THE FACTS: This is a made-up story.

Trump is suggesting that CNN turned off its camera lights the moment he criticized the news media, stopping live TV coverage of his rally. But CNN was not broadcasting the event live.

TRUMP: “The Democrat Party is determined to … eviscerate Medicare and put every single senior citizen at risk.” — Florida rally.

THE FACTS: He’s incorrect that Democrats would seek to “eviscerate Medicare.” Trump appears to be referring to Democratic proposals to provide “Medicare for All,” but the options that would allow younger people to buy into a Medicare-like plan don’t involve overhauling the current program.

The plan by Sen. Bernie Sanders, a Vermont independent, would be a fundamental change, expanding Medicare to cover almost everyone in the country. But current Medicare recipients would get improved benefits. Sanders would eliminate Medicare deductibles and almost all copays, and provide coverage for dental and vision care, as well as hearing aids. His plan would also provide home and community based long-term care.

The issue is whether the U.S. can afford to convert to a new government-run health care system, not that older Americans would be left uncovered. The Democratic proposals call for new taxes to help pay for expanded Medicare coverage. 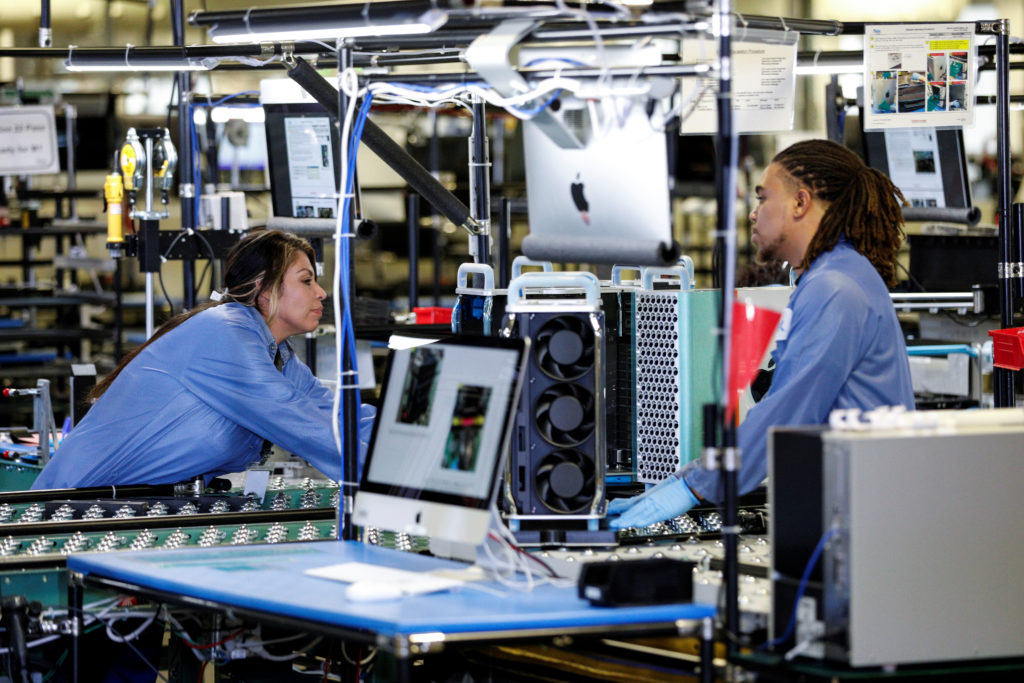 TRUMP, looking back at his recent trip to Austin, Texas: “Then on Monday I flew to Texas, the great state of Texas and I opened up an Apple computer plant.” — Florida rally.

THE FACTS: He didn’t do that, and it wasn’t on Monday. He visited an Austin factory on Nov. 20, a Wednesday, that’s been making the Mac Pro for Apple since 2013.

He made the same claim in a tweet the day of his visit: “Today I opened a major Apple Manufacturing plant in Texas that will bring high paying jobs back to America.”

Apple announced in September that it would continue having the Mac Pro line made in Austin, after the Trump administration agreed to waive tariffs on certain computer parts from China. It said on the day of his trip that it has started construction of its new campus in the city.

Left: A Capitol Hill Police officer is silhouetted before a Trump-Zelensky call record on a screen, as Fiona Hill, former senior director for Europe and Russia on the National Security Council, and David Holmes, political counselor at the U.S Embassy in Kiev, testify before a House Intelligence Committee hearing as part of the impeachment inquiry into U.S. President Donald Trump on Capitol Hill in Washington, U.S., November 21, 2019. Photo by Loren Elliott/Reuters.