WASHINGTON — On the eve of the New Hampshire primary, President Donald Trump told a rally that people who are in the United States illegally are paying for his Mexico border wall. It was the latest iteration of his effort to convince the public that Mexico is covering the cost, just as he promised throughout his 2016 campaign and since.

Evidence to the contrary came three days later. The Pentagon announced it is taking $3.8 billion approved by Congress for fighter aircraft, ships and other military programs and using the money to pay for the wall. The Defense Department took a similar step last year and may yet again. U.S. taxpayers are paying for the wall, not Mexico, as has been the case from the start.

Trump spread a variety of distortions at the rally, and still more in other venues during a week that came to be dominated by machinations involving the Justice Department. The release of his proposed budget prompted Democrats to wrongly accuse him of undermining Medicare.

The week in review:

THE FACTS: To date, the money is coming from the U.S. treasury, meaning today’s taxpayers and the future ones who will inherit the federal debt. To the extent any people who came into the U.S. illegally are kicking in for the wall, it’s because they’re working and paying taxes like other workers.

“Redemption” payments don’t exist; Trump apparently meant to cite remittances. That refers to money that immigrants in the U.S. send to their countries of origin, often to family members. Trump has at various times talked about taxing or blocking such money but that has not been done.

Mexico flatly refused at the outset to pay for the wall. That has given rise to creative formulations by the president about how Mexico in some way is contributing. For example, he has projected that his updated trade agreement with Mexico and Canada will stimulate enough extra growth over the years to cover the cost. Even if that happens, which analysts widely doubt, the wall will have cost the U.S. money that it could have used for something else. It’s not a payment from Mexico.

Trump freed up $3.6 billion for the wall last year by diverting money from military construction projects as well as $2.5 billion from approved counter-drug spending.

TRUMP: “Remember last time we won the primary tremendously. We should have won the election but they had buses being shipped up from Massachusetts, hundreds and hundreds of buses.” — rally Monday in New Hampshire.

THE FACTS: Trump is once again trafficking in the unfounded conspiracy theory that buses of illegal voters traveled in from Massachusetts in 2016 to deprive him of a New Hampshire victory in the general election against Democrat Hillary Clinton.

The accusation that people from more liberal Massachusetts crossed state lines in buses and voted in 2016 was made by Republican Chris Sununu, who at the time won election as governor. Sununu quickly backed down, saying his talk about busloads of illegal voters was “more a figure of speech” — in other words, not reality. Sununu later told the New Hampshire news network NH1 that he was “not aware of any widespread voter fraud” in the state.

More broadly, Trump has repeatedly asserted but produced no evidence of widespread voting fraud in 2016 by people in the country illegally or by any group of people.

He tried, but the commission he appointed on voting fraud collapsed from infighting and from the refusal of states to cooperate when tapped for reams of personal voter data such as names, partial Social Security numbers and voting histories. Studies have found only isolated cases of voter fraud in recent U.S. elections and no evidence that election results were affected.

Loyola Law School professor Justin Levitt found 31 cases of impersonation fraud, for example, in about 1 billion votes cast in elections from 2000 to 2014.

THE FACTS: That’s misleading at best.

There have indeed been 401(k) increases of 100% or more since 2017, but those were largely among workers with fewer than four years at their job, according to the Employee Benefits Research Institute. The increases are big for recent and younger employees because they generally start with meager savings. The gains come in part from workers setting aside money from their own paychecks and contributions from their employers, not just market returns.

In that circumstance, it’s unremarkable to see a $1,000 401(k) account double in a year, for example, when a young worker and perhaps the employer is paying into it.

Older workers with more than 20 years on the job have seen gains of roughly 50% over three years in their retirement accounts, thanks both to contributions from paychecks and market gains.

Moreover, the S&P 500 — the broadest measure of the U.S. stock market — was up 47.6% from Trump’s inauguration through Monday’s close.

Some 401(k) averages are problematic for Trump’s claims to be generating prosperity because many workers lack the savings for a comfortable retirement. The median account balance was $22,217 in 2018 in 401(k) and similar plans for which investment giant Vanguard was the record-keeper. That’s down from $26,331 in 2017. 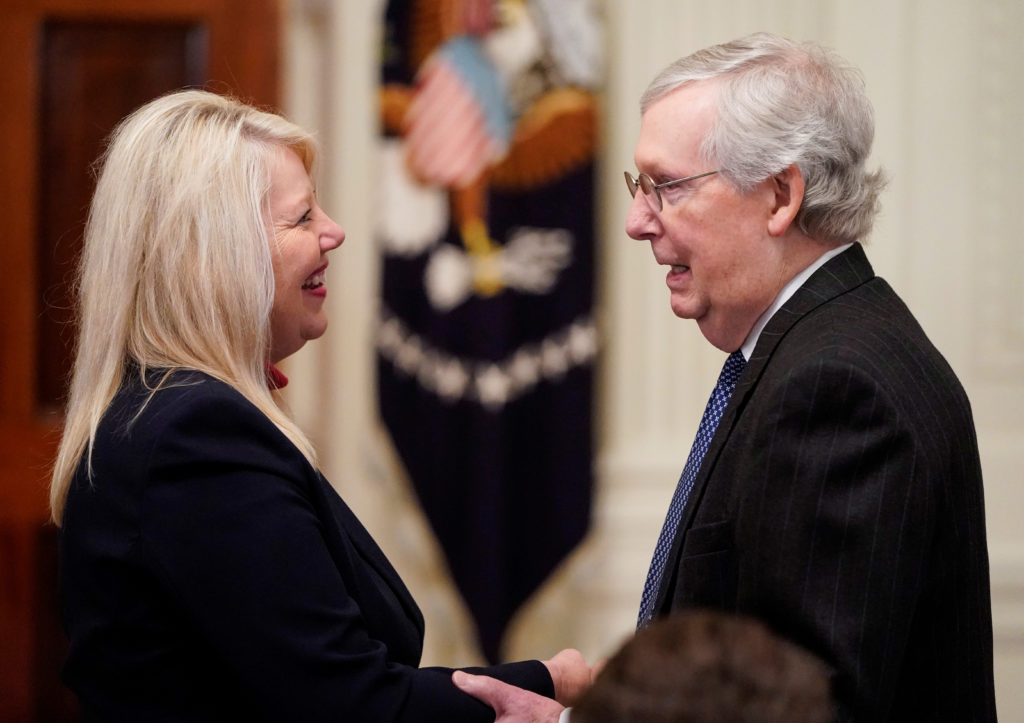 TRUMP, on impeachment: “It wasn’t even close. I want to thank our Republican senators and our Republican House members; they were tremendous. In the House, we won 196 to nothing, and then we got three Democrats.”

THE FACTS: By that measure, the San Francisco 49ers won the Super Bowl 20-0. They actually lost it 31-20 to the Kansas City Chiefs.

If you only count your own score, you win every vote and every game.

The House impeached Trump on a 230-197 vote on the first article, outlining abuse of power charges, and a 229-198 vote on the second article covering obstruction of Congress. That’s because most of the majority Democrats backed impeachment.

Again, he ignores votes from the Democrats. Trump was acquitted of impeachment charges after senators in the Republican-controlled Senate narrowly rejected Democratic demands to summon witnesses and extend the trial. The Senate acquitted Trump by votes of 52-48 on abuse of power and 53-47 on obstructing Congress.

Utah Sen. Mitt Romney was the only Republican to vote for conviction, doing so on the abuse of power charge.

HOUSE SPEAKER NANCY PELOSI: “One week after the President paid lip service to protecting the health care of American families, his budget betrays his values with cruel cuts to Medicare and Medicaid. Vulnerable families and seniors deserve better.” — tweet Monday.

SENATE DEMOCRATIC LEADER CHUCK SCHUMER: “By proposing severe cuts to Medicaid and Medicare, President Trump’s latest budget is simply a continuation of his war to rip away health care from millions of Americans, including people with preexisting conditions.” — statement Monday.

THE FACTS: The leading Democrats are engaging in a timeworn political tactic known as ‘Mediscare.’ Trump’s budget doesn’t gut Medicare, and it wouldn’t reduce benefits to seniors.

The budget’s $465 billion over 10 years in Medicare cuts would come from lower projected payments to hospitals and other service providers. For example, the budget calls for equalizing Medicare payments for similar services delivered in a hospital-owned facility and a doctor’s office, saving about $164 billion over 10 years. Hospital-based services generally command higher reimbursement now, a practice that has prompted criticism.

The outlook is worse for Medicaid, which covers low-income people, including seniors and disabled people who qualify for both programs. Trump’s budget signals his intention to press for significant Medicaid cuts, which could lead states to scale back some benefits. 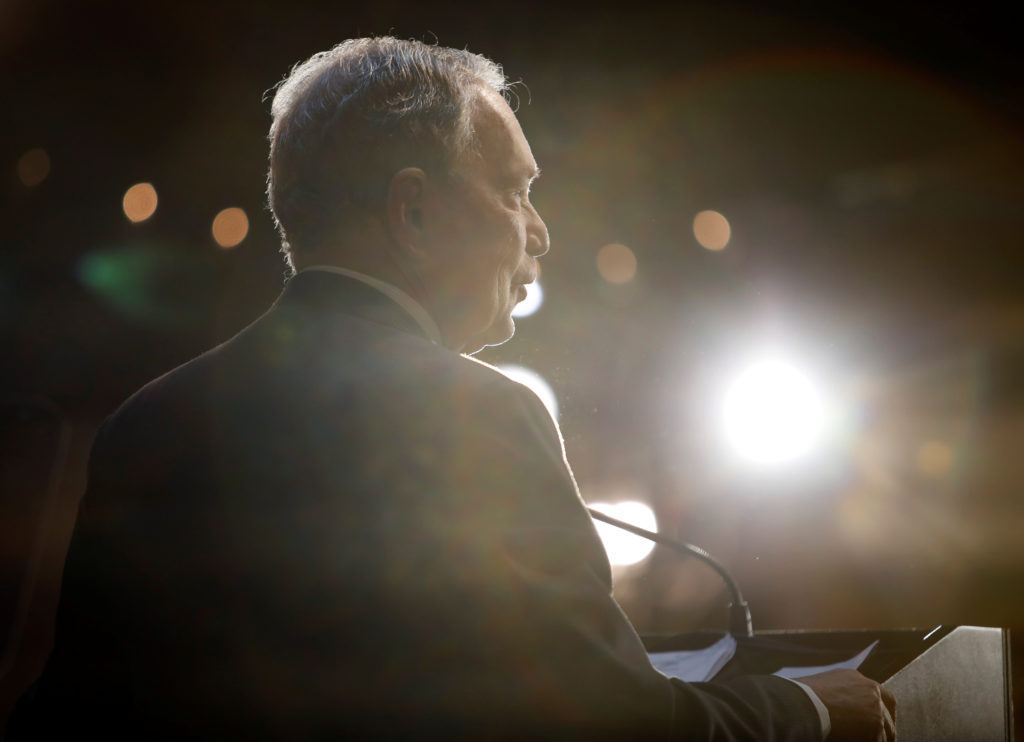 TRUMP, boasting of accomplishments for veterans: “Something that couldn’t be done for 44 years, they say, and that’s Veterans Choice.That’s one of the reasons, I think, the VA is doing so well. ” — veterans’ event Tuesday.

THE FACTS: Actually, President Barack Obama won passage of the Veterans Choice program, which gives veterans the option to see private doctors outside the VA medical system at government expense. Congress approved the program in 2014, and Obama signed it into law. Trump expanded it.

The program’s impact on improving VA care has been unclear.

The VA has said it does not expect a major increase in veterans seeking care outside the VA under Trump’s expanded program, partly because wait times in the private sector are typically longer than at VA. “The care in the private sector, nine times out of 10, is probably not as good as care in VA,” VA Secretary Robert Wilkie told Congress last year.

In 2019, 35 percent of all VA appointments were with outside physicians, slightly lower than the 36 percent in 2017. 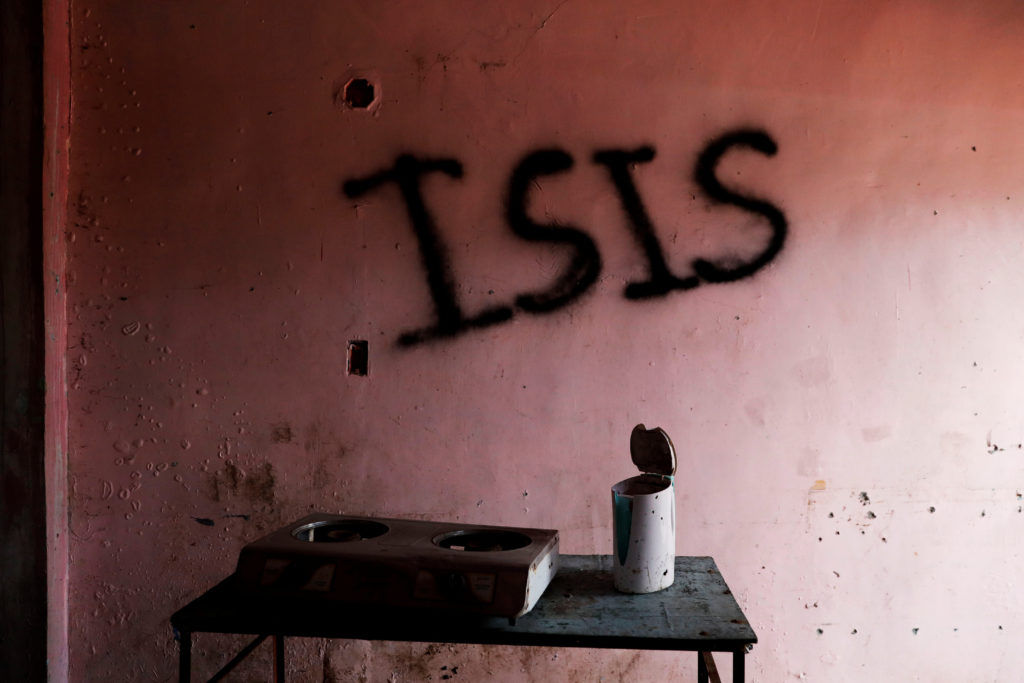 Burnt kitchen items are seen in front of a wall spray-painted with the word “ISIS” in a home in the most affected war-torn area of Marawi City, Lanao province, Philippines, May 11, 2019. The city remains abandoned two years after pro-Islamic State militants began their attacks on May 23, 2017. Photo by Eloisa Lopez/Reuters.

TRUMP, responding to word that the Philippines will end a security pact allowing U.S. forces to train in the country: “We helped them defeat ISIS. … But if you look back, if you go back three years ago, when ISIS was overrunning the Philippines, we came in and, literally, single-handedly were able to save them from vicious attacks on their islands.” — Wednesday at the White House.

THE FACTS: He’s wrong in saying Islamic State fighters were overrunning the Philippines and that the U.S. “single-handedly” saved the country from them.

Only dozens of IS fighters are known to have gone to the Philippines since the rise of the group in the Mideast, and the local militants who aligned with the organization number in the hundreds.

In May 2017, in the operation touched on by Trump, more than 600 IS-aligned local militants, backed by a smattering of foreign jihadists, laid siege to Marawi, a small Islamic city in the largely Roman Catholic country. They held control of several neighborhoods and multiple buildings. Philippine troops launched a massive offensive and routed them after five months.

U.S. and Australian aircraft helped with surveillance. U.S. troops were not engaged in combat. The Philippine Constitution prohibits that.

TRUMP: “Mini Mike is a 5’4” mass of dead energy who does not want to be on the debate stage with these professional politicians. No boxes please.” — tweet Thursday.

THE FACTS: Democratic presidential contender Mike Bloomberg is not that short.

In a letter released by Bloomberg’s campaign in December, Bloomberg’s doctor said the candidate is 5 feet, 7 inches, and 165 pounds.

Bloomberg once listed his height on his driver’s license as 5-foot-10, which he isn’t. When he was mayor of New York City, the New York newspapers variously reported his height at 5-foot-6, 5-foot-7 and just shy of a 5-foot-8 aide.

Trump shortchanged all that in his tweet, cutting Bloomberg’s height by several inches.

Trump’s own height has been a moving target. He’s been listed at 6-foot-3-inches by the White House physician. But in 2016, Politico reported that his driver’s license had him as 6-foot-2, the same height as on his Selective Service registration card in 1964.