WASHINGTON (AP) — President Donald Trump said he wanted to maintain a freeze on military assistance to Ukraine until it aided political investigations into his Democratic rivals, former national security adviser John Bolton recounts in a draft of his forthcoming book.

The revelation challenges the defense offered up by Trump and his attorneys in his Senate impeachment trial and raises the stakes as the chamber decides this week whether to seek sworn testimony from Bolton and other witnesses.

Bolton’s account was first reported by The New York Times and confirmed to The Associated Press by a person familiar with the manuscript on the condition of anonymity to discuss the book, “The Room Where It Happened; A White House Memoir,” ahead of its release March 17.

Bolton, who acrimoniously left the White House a day before Trump ultimately released the Ukraine aid on Sept. 11, has already told lawmakers that he is willing to testify, despite the president’s order barring aides from cooperating in the probe.

Democrats need at least four Republicans to vote with them to seek witness testimony. Those prospects looked unlikely in recent days and it’s unclear if the new revelations about Bolton’s book will sway any GOP senators.

Democrats quickly sought to ramp up the pressure on their Republican counterparts. The House managers called the book’s revelation “explosive” in a joint statement and said, “Senators should insist that Mr. Bolton be called as a witness, and provide his notes and other relevant documents.” They added: “During our impeachment inquiry, the President blocked our request for Mr. Bolton’s testimony. Now we see why.”

“John Bolton has the evidence,” tweeted Senate Minority Leader Chuck Schumer. “It’s up to four Senate Republicans to ensure that John Bolton, Mick Mulvaney, and the others with direct knowledge of President Trump’s actions testify in the Senate trial.”

Senate Majority Leader Mitch McConnell had no immediate comment, according to his office.

Sarah Tinsley, an adviser to Bolton, said: “The ambassador’s manuscript was transmitted to the White House in hard copy several weeks ago for pre-publication review by the NSC. The ambassador has not passed the draft manuscript to anyone else. Period.”

The pre-publication review is standard for the work of former officials with security clearances.

Bolton attorney Charles J. Cooper sharply criticized the White House for allowing excerpts from the book to be made public, saying in a statement that the pre-publication review process had been “corrupted and that information has been disclosed by persons other than those properly involved in reviewing the manuscript.”

Democrats accuse Trump of abuse of power in withholding the military assistance to Ukraine to push that country to mount investigations into Democrats, including former Vice President Joe Biden and his son Hunter, who served on the board of a Ukraine gas company, Burisma, while his father was in office.

On Saturday, the president’s attorneys said during their opening day of defense arguments that there was no evidence that Trump made the military aid contingent on the country announcing an investigation into Biden. 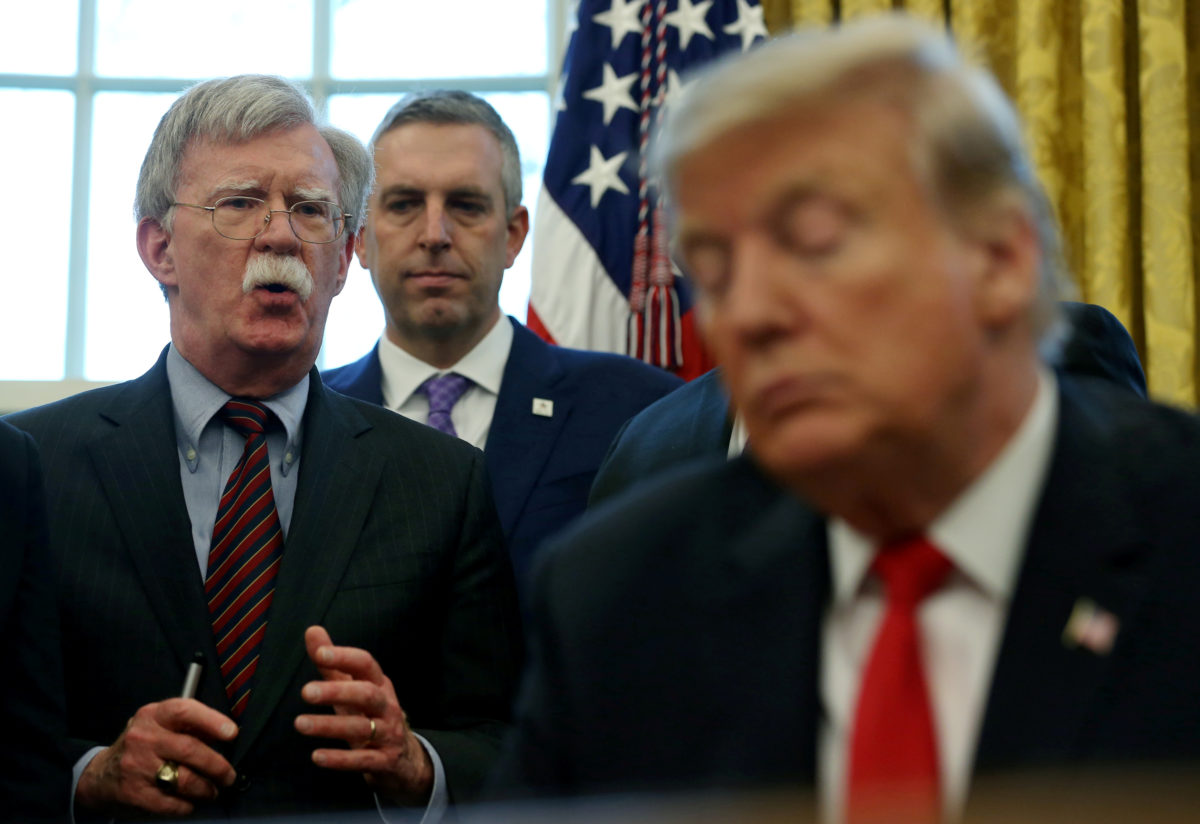 The Times also reported that Bolton says he told Attorney General William Barr that he was mentioned by Trump on his July 25 call with Ukrainian President Volodymyr Zelenskiy. A Justice Department official on Sunday disputed Bolton’s account that he had told Barr about the president’s call with Zelenskiy but did say that Bolton had called Barr to raise concerns about Giuliani’s shadow diplomacy efforts.

Trump on Wednesday told reporters in Davos, Switzerland, that he didn’t want Bolton to testify before the Senate.

“The problem with John is it’s a national security problem,” Trump said. “He knows some of my thoughts. He knows what I think about leaders. What happens if he reveals what I think about a certain leader and it’s not very positive and then I have to deal on behalf of the country?”