As the White House defends its response to the coronavirus pandemic while trying to reassure voters that the economy will recover from widespread shutdowns, Vice President Mike Pence is heading to Minnesota, a key 2020 battleground state that favored Hillary Clinton in 2016 and elected a Democratic governor in 2018.

On Tuesday, Pence will meet with Minnesota Gov. Tim Walz to highlight the state’s new COVID-19 testing initiative. Pence and President Donald Trump have been pressing states to scale up their testing programs rather than rely on a federal testing system. Walz and other governors have been asking for more testing kits and other supplies for weeks. Minnesota tried in March to offer testing to anyone who wanted it after several coronavirus outbreaks at meat-processing plants and nursing homes in the state, but supplies quickly ran out and the testing backlog grew.

The Minnesota trip marks the vice president’s fourth public appearance outside Washington since the World Health Organization officially declared the pandemic — his previous three trips were to other states key to Trump’s re-election: Colorado, Wisconsin and Virginia.

Republicans face an uphill challenge in order to flip Minnesota red. They lost key suburban districts to Democrats in the 2018 midterms. Farmers — who comprise a large share of the state’s economy — have been among the hardest hit by some of the policies born from Trump’s trade war with China, and some of them are not as certain of the president’s approach as they were in the last election. 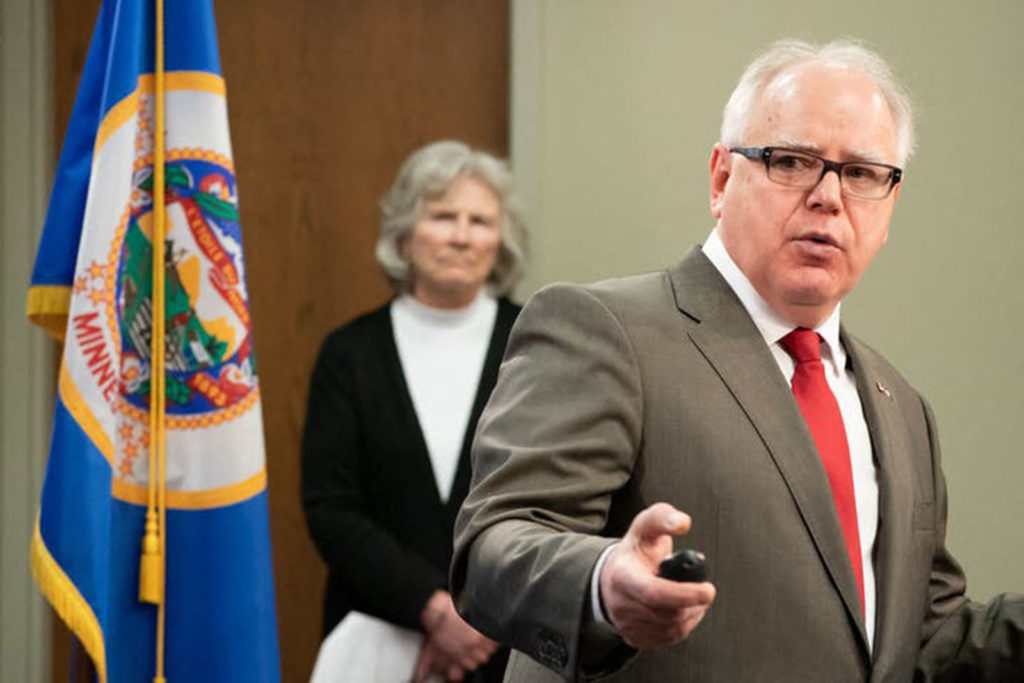 Pence plans to tour COVID-19 treatment and research facilities at the Mayo Clinic in Rochester, Minnesota, which sits in a critical Republican-held swing district that runs along the Iowa border, spanning small towns and the state’s best farmland.

These kinds of districts are key to Trump’s reelection. People in Minnesota’s 1st Congressional District voted for George W. Bush and Barack Obama twice each before Trump handily won the district over Clinton in 2016. That same year the district reelected then-Congressman Walz to a fifth term.

Health officials warn the virus will peak later in rural areas like Minnesota’s 1st District, where populations are often older. Nearly 900 cases and 27 deaths have been confirmed in the district so far.

Pence’s visit is likely to be welcomed by many residents in Minnesota’s 1st District, especially Republicans who have become uneasy with the president’s handling of the crisis and see Pence as the steady leader in the White House’s virus response. In light of public criticism over some of the president’s comments during his coronavirus task force briefings — including a suggestion last week that people might be able to kill the virus by injecting disinfectant into their bodies, which medical professionals have decried as without merit and potentially fatal — White House officials are urging the president to scale back his daily briefings.

Trump won the traditionally conservative Rock County in Minnesota’s 1st District by nearly 36 points in 2016. Greg Burger, 69, is the Rock County GOP chair and said most people in his small town of Luverne are taking seriously the stay-at-home order Walz issued on March 25, and they generally approve of Walz’s handling of the pandemic, as he is now beginning to gradually lift restrictions to get more people back to work.

“I think the governor has done a respectable job, and I think the VP has handled himself really well,” Burger, who’s also a county commissioner, said of Walz and Pence. “The president has done a reasonable job handling it. I think he steps over the line occasionally with his comments. He’s not an expert on science, clearly.”

Rep. Tom Emmer, who heads the National Republican Congressional Committee’s efforts to elect Republicans to the House, has dismissed the idea that Republican voters are increasingly wary of Trump’s coronavirus response, including his suggestion regarding injecting disinfectant. Emmer said he didn’t see the president make the comments, but saw “that headline” and believes the media must have overblown them.

“He’s going to win Minnesota by more this time and more people will vote for Donald Trump in Minnesota in 2020 than they did in 2016,” Emmer said, adding that he’s confident the district will reelect its current pro-Trump Republican Rep. Jim Hagedorn.

But Burger suspects Trump’s margins will be tighter in the district than in 2016 should he run against the presumptive Democratic nominee, former Vice President Joe Biden.

“I think Biden is a bit more moderate and frankly a bit more likable in the district than Hillary Clinton,” Burger said.

Rock County sits between two coronavirus outbreaks at now shuttered pork-processing plants — one just over the South Dakota border in Sioux Falls, and another 30 miles down the road in Worthington, Minnesota.

“It’s been devastating in our part of the world, our farmers are hurting right now,” Burger said. The district’s economy is largely dependent on agriculture.

“That is our number one buyer,” Bill Gordon, a fourth generation farmer in Worthington, said of the pork plants. Gordon, president of the American Soybean Association, said the group is working with the Department of Agriculture to fix food supply lines disrupted by the pandemic. Meanwhile, farmers are still bearing the economic brunt of Trump’s trade war with China, though they’ve received two rounds of bailout checks from his administration. 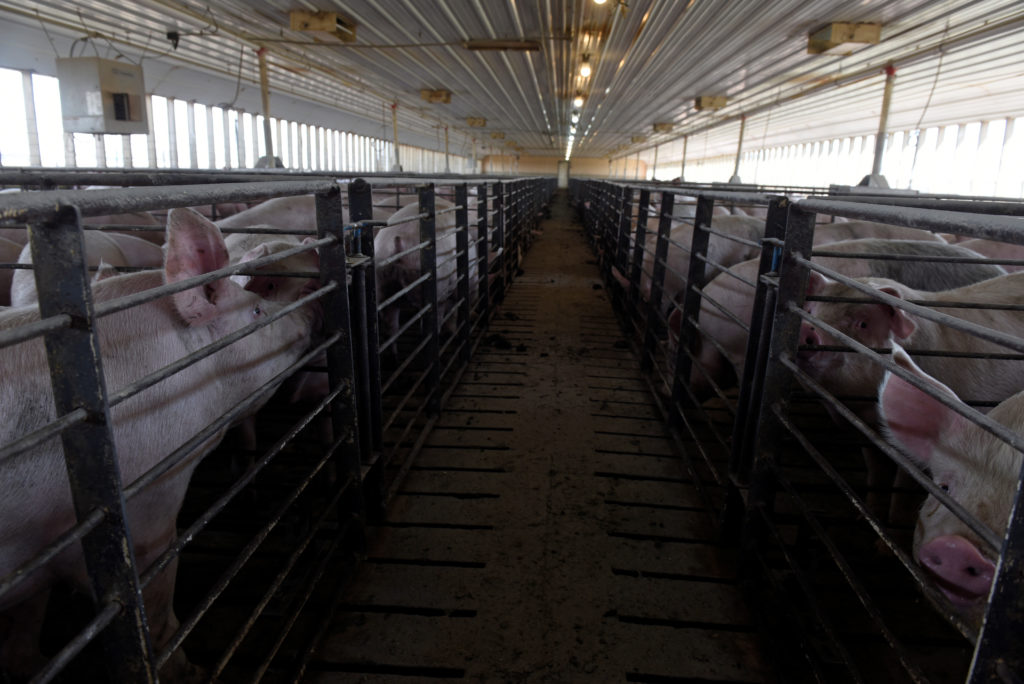 Hog farmer Mike Patterson’s animals, who have been put on a diet so they take longer to fatten up due to the supply chain disruptions caused by coronavirus disease (COVID-19) outbreaks, at his property in Kenyon, Minnesota, U.S. April 23, 2020. Picture taken April 23, 2020. REUTERS/Nicholas Pfosi

“It’s just keeping us going,” Sam Ziegler, a 40-year-old farmer in Mankato, Minnesota, said of the bailout checks. “Government payments never help you turn a profit,” Ziegler said, noting a 5-year downturn in U.S. agricultural markets. Greg Smith, a farmer in Rushford, said he may have to start euthanizing the 1,300 pigs he usually sells every week but now can’t find a processing plant to take. Smith was supportive of Trump’s trade policies at first, but coupled with the pandemic, he said Trump has now overseen “the worst time in my life” for farming.

Trump had promised last year that China would buy $50 billion in agricultural goods, which Gordon said he doesn’t think will happen before the November election unless something changes.

Mandy Fenske, 45, a head nurse at the Valley View Healthcare and Rehab nursing home in Houston, Minnesota, voted for Trump in 2016, but said she doesn’t see why the president chose to encourage protesters to “liberate Minnesota” while people were dying in her state. “I understand where they’re coming from,” said Fenske, who also voted for Obama. “But there’s bigger things we need to be worried about.”

“I know there’s got to be pressure every which way to get the economy back up and running, but I worry if we open up too quickly it will be worse a second time around,” said Fenske, who made the call to lock down her nursing home in early March, after cases were reported in a nearby county. A day earlier, Trump told Americans to “just stay calm. It will go away.”

“We as a country should have been like, ‘come on guys,’” Fenske said. “But hindsight is 20/20.” Fenske said she’d hold the president responsible for any deaths that result from reopening states too soon.

Democrats in the district say many of Trump’s supporters will rationalize his actions. But Teresa O’Donnell-Ebner, chair of the Houston County Democrats, said she believes the district’s moderate and independent voters “are seeing his shortcomings.”

“I think it’s become clear to people that the president isn’t really leading a team as he should be,” O’Donnell-Ebner said.

But there is growing frustration over how Minnesota’s Democratic governor is handling the pandemic, too.

Jo Ann Radlinger, who owns Jo’s Fitness Garage in Mankato, received an eviction notice last week after failing to pay rent on her $2,500-a-month commercial lease. While Walz’s executive order put a hold on residential evictions, it did not address businesses. Radlinger’s gym has been closed since March 17, when Walz issued an executive order to close dine-in restaurants, gyms and other non-essential businesses.

“I felt numb. This business that I poured my heart and soul into…” Radlinger said before trailing off. She has no way to pay for upcoming May rent or the past rent she missed until the emergency loan she applied for under the recent relief legislation is processed.

A registered Independent who approved of Trump’s handling of the economy before the pandemic, Radlinger is unsure how much it will be able to “bounce back,” as the president has claimed, before November.

“How am I actually going to survive if I can even reopen?” Radlinger asked. “I’ve told myself if my business is going to be back to where it was on March 17 in three years, I’ll be super happy.”

Jeff Royce, co-owner of Lindsay Window and Door in Mankato, was supportive of the governor’s stay-at-home order in the beginning, but now he believes it’s time to reopen the state. His window and door business has been deemed essential and employs 450 employees in six states, but he also owns a hair salon that has been shuttered.

“I think as long as temperatures are taken beforehand, I think that’s fine,” Royce said. He added that retailers and other stores could be reopened while vulnerable populations are protected.

Royce, a father of three, also disagrees with Walz’s decision to keep school buildings closed for the rest of the academic year, saying he believes they could have opened them for elementary students while implementing social distancing measures.

Royce said he is planning to vote for Trump again in 2020. “Are there other candidates that I would like to see run? Sure,” Royce said. “But I can’t see a situation before the election where I’d vote for Joe Biden.”

Burger, the Rock County Republican chair who voted for Trump in 2016, said he is still undecided.

“I think there are times when [Trump] is less than truthful to gain politically,” said Burger, an evangelical Christian who favors small government. He worries about the cost of the government’s relief packages and what it will mean for his children and grandchildren’s generation — though under the circumstances, he said he doesn’t see many other options.

“I may not vote,” the longtime Republican chair added. “I never thought that would happen.”