President Joe Biden’s job approval rating in July is his lowest since taking office, with support among independent voters steadily dwindling, according to the latest PBS NewsHour/NPR/Marist poll.

If independents serve as a weathervane for public opinion, Biden faces strong headwinds of dissent. In July 2021, nearly half of all independent registered voters said they approved of Biden’s performance so far. Now, nearly half – 46 percent – say they “strongly disapprove” of Biden’s presidency. Overall Biden support from independents has dropped by 20 percentage points, a trend that could weigh down Democratic candidates running for Congress this November.

In the new poll, about a third of U.S. adults – 36 percent – say they like how Biden is leading the nation. Another 57 percent said they disapprove of his performance — his highest disapproval rating yet. Looking at race, income, geography, age or education, no group mustered majority approval of Biden as president. 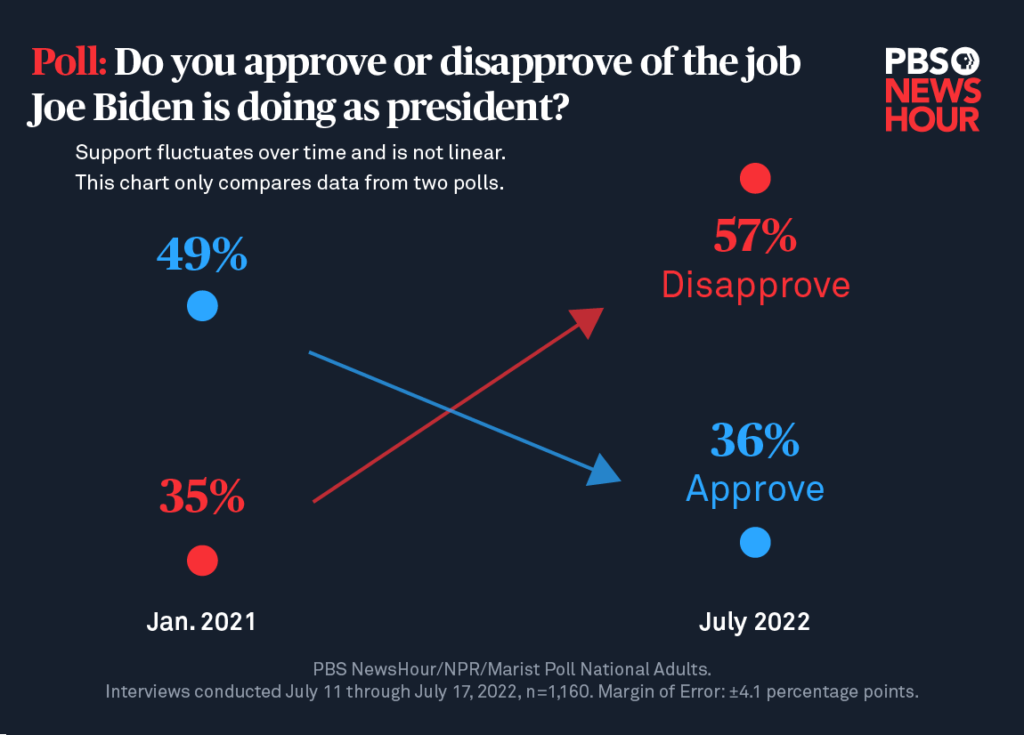 Party affiliation offers the lone exception, with three-quarters of Democrats and people who said they voted for Biden in 2020 endorsing the president. But that support has slid substantially during Biden’s time in office, down from 94 percent shortly after his inauguration.

By comparison, former President Donald Trump was supported by 84 percent of Republicans in July 2018, a similar point in time during his administration. At the time, 70 percent of registered voters suspected Russia had interfered in the 2016 presidential election, and most Americans saw Trump as not being tough enough on its old adversary.

Biden’s numbers are trending more negative than any other modern president in a midterm cycle, according to 538’s tracking of approval rating polling averages. This latest poll result will not improve the outlook. 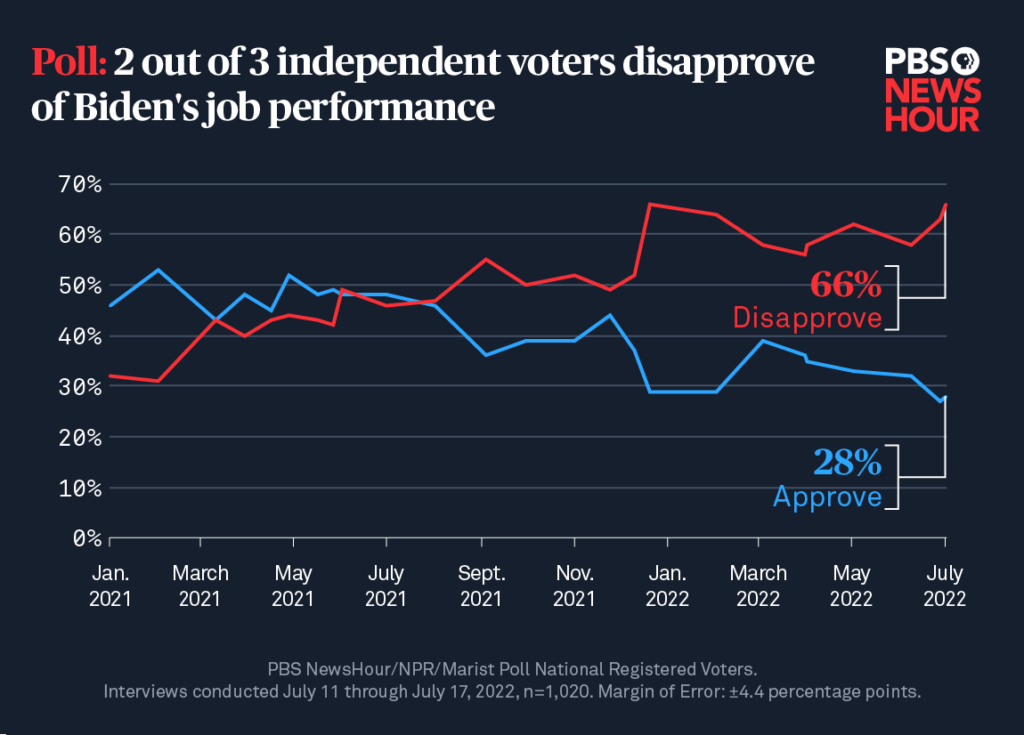 Political fortunes can turn on a dime, and much can change between now and after Labor Day, said Jessica Taylor, Senate and governors editor for the Cook Political Report, but “Joe Biden’s numbers are going in the wrong direction.” Biden is losing his standing with independent voters faster than voters overall, and with an approval rating that has dipped below Trump’s. “You don’t want to be below that benchmark,” Taylor said.

Overall, Biden scored high job approval numbers initially but fell into a slump – a trajectory that is fairly typical among U.S. presidents, said Neil Malhotra, a political economist at Stanford University. In contrast, Trump entered office with roughly a third of the country’s support behind him, according to historic polling data from the Marist Poll, and that remained virtually unchanged throughout his term.

Following historic and compounded crises, the public had high hopes for better times, Malhotra said. Since Biden was inaugurated just days after an insurrection took place at the U.S. Capitol, he has been confronted with a growing list of messy, legacy-defining problems: the nation’s response to the ongoing coronavirus pandemic, spiraling inflation, Russia invading Ukraine, a resurgence in mass shootings and the Supreme Court overturning Roe v. Wade.

“There’s a lot of expectation-setting that Biden did, which he hasn’t come through on,” he said. That led to many Americans being disappointed, including one out of five members of his own base. 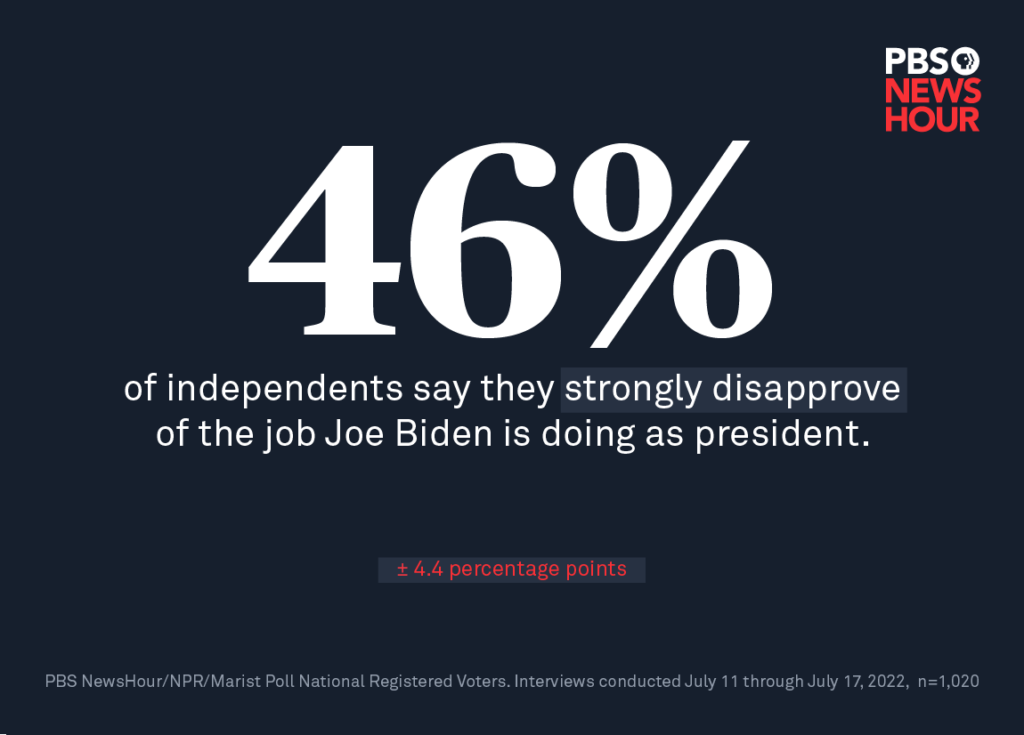 That doesn’t mean Biden has wasted his time in office, Malhotra added. Biden has shepherded an historic $3 trillion infrastructure package and the most significant gun control law to pass Congress in roughly three decades. With so much happening, people quickly forget those accomplishments, he said.

How the Biden administration and Democrats manage those expectations going forward could shape who holds power in Congress after this November’s midterm elections, as well as influence the path to the White House in 2024. In some Senate races, including in Georgia and Arizona in 2020, Taylor said Democratic candidates have beat the odds.

“The question is: How low can he go, and how much can Democratic candidates outperform him?”

Left: A majority of U.S. adults -- 57 percent -- said they disapprove of his performance -- his highest disapproval rating yet, according to the latest PBS NewsHour/NPR/Marist poll. Photo by Jakub Porzycki/NurPhoto via Getty Images