Most Americans think President Donald Trump has not been tough enough on Russia or improved the nation’s role as a world leader, according to a new poll from the PBS NewsHour, NPR and Marist Poll taken after Trump’s summit last week with Russian President Vladimir Putin.

Trump said at a joint press conference with Putin that he did not see any reason why Russia would interfere in the 2016 presidential election, contradicting the conclusions of U.S. intelligence agencies.

The remarks and Trump’s overall performance — both at the Helsinki meeting with Putin and during the two-day NATO summit in Brussels the previous week — stunned diplomatic, security and intelligence experts in the U.S. and around the world.

Trump walked back his comments on Russia the day after his appearance with Putin, though he later cast doubt on Special Counsel Robert Mueller’s investigation into Russia’s role in the 2016 race. 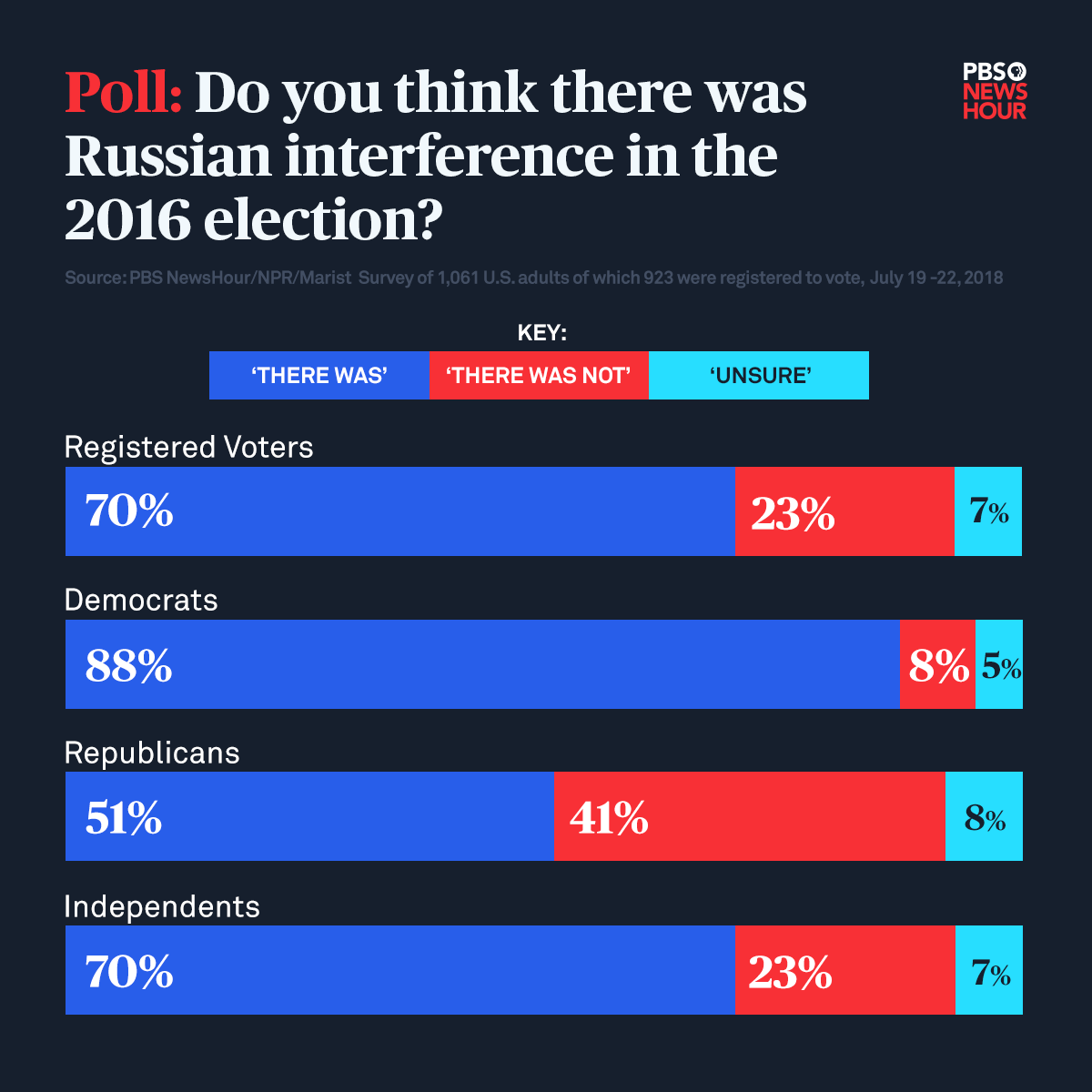 Still, 72 percent of Americans said they were more likely to believe U.S. intelligence agencies over Putin’s claims that Russia didn’t interfere in the election, the poll found, while 15 percent said they believed the Russian president. Among Republicans, 21 percent said they would sooner believe Putin over information from the CIA or FBI. Just 6 percent of Democrats said they felt the same way.

The poll found that 64 percent of U.S. adults believe Trump is not tough enough on Russia. Just 8 percent of Americans said the president is too tough on Russia, and that idea received weak support, regardless of where the respondent fell on the political spectrum.

The poll shows the American public’s views on Trump, Russia and Mueller’s investigation have not shifted much over time.

Two-thirds of Americans — 69 percent — also think Russia interfered in the 2016 U.S. presidential election. Among Republicans who were polled, 51 percent said they think so. In contrast, 70 percent of people who identify as politically independent and 88 percent of Democrats said they thought Russia meddled in the election. And overall, 37 percent of U.S. adults think Russia’s meddling transformed the 2016 election results.

Looking to the 2018 midterm elections, most Americans don’t think Russia has abandoned efforts to influence U.S. politics. Fifty-seven percent of respondents said they anticipate more meddling in November. Seventy-three percent of Democrats agree, as well as 58 percent of people who identify as politically independent. In contrast, most Republicans — 58 percent — appear hopeful that Russia will not interfere in U.S. elections this fall. 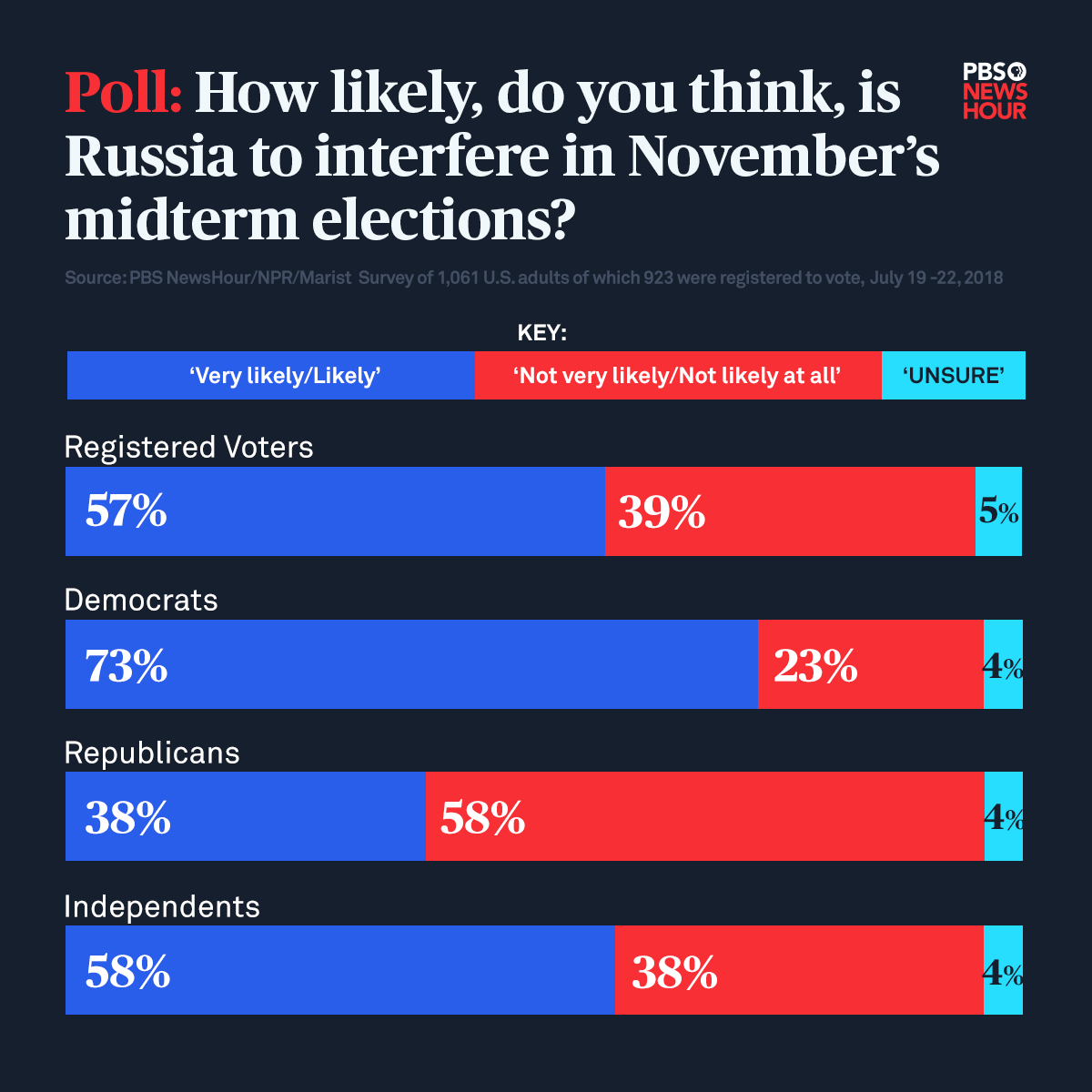 The poll shows the American public’s views on Trump, Russia and Mueller’s investigation have not shifted much over time, said Lee Miringoff, who directs the Marist Institute for Public Opinion.

“People have picked sides on these issues,” Miringoff said. “We haven’t seen a lot of movement.”

Fifty-three percent of Americans think Trump acted either illegally or unethically with Russia and Putin, according to these polling data. And two-thirds of Americans think Mueller should be allowed to finish his investigation into Russian interference in the 2016 election, an opinion that has shifted little since January.

Trump has continued speaking about Russia since his meeting with Putin. Shortly after returning from the summit in Finland, the president surprised his own Director of National Intelligence Dan Coats when he announced plans to potentially invite Putin to the White House this fall. A majority of Americans said they want the U.S. to forge a relationship with Russia, but Americans are split on whether or not Trump should view Putin as an ally or an enemy. Among those surveyed, 44 percent said Putin should be seen as a friend, while an additional 45 percent regarded him as a threat to the United States.

PBS NewsHour, NPR and Marist Poll conducted a survey July 19-22 that polled 1,061 U.S. adults, with a margin of error of 3.6 percentage points.