Biden’s win came at a do-or-die moment in his 2020 bid as the moderate Democrat bounced back from underwhelming performances in Iowa, New Hampshire and Nevada. The race now pivots immediately to a new phase when 14 “Super Tuesday” states take the campaign nationwide early next week.

“We are very much alive,” Biden declared at an exuberant post-election rally. “For all of you who have been knocked down, counted out, left behind — this is your campaign.”

Sanders claimed second place, though his loss gave a momentary respite to anxious establishment Democrats who feared that the self-described democratic socialist would finish February with four consecutive top finishes.

Billionaire activist Tom Steyer took third place, his best showing of the campaign, but he formally suspended his campaign. He spent more $24 million on television advertising in South Carolina — more than all of his rivals combined — but never found a clear lane in the crowded contest.

Seven candidates remain in the Democrats’ quest to find the strongest possible nominee to take on President Donald Trump in November.

Biden’s allies almost immediately cast the South Carolina victory as proof that he should stand as the clear alternative to Sanders.

The South Carolina primary was the first major test of the candidates’ appeal among black voters. And while it gave the 77-year-old Biden a win when he most needed it, he must still prove that he has the financial and organizational resources to dramatically expand his campaign in the next 72 hours. He will also be under pressure to rely on his decades-long relationships with party leaders to create a new sense of inevitability around his candidacy. 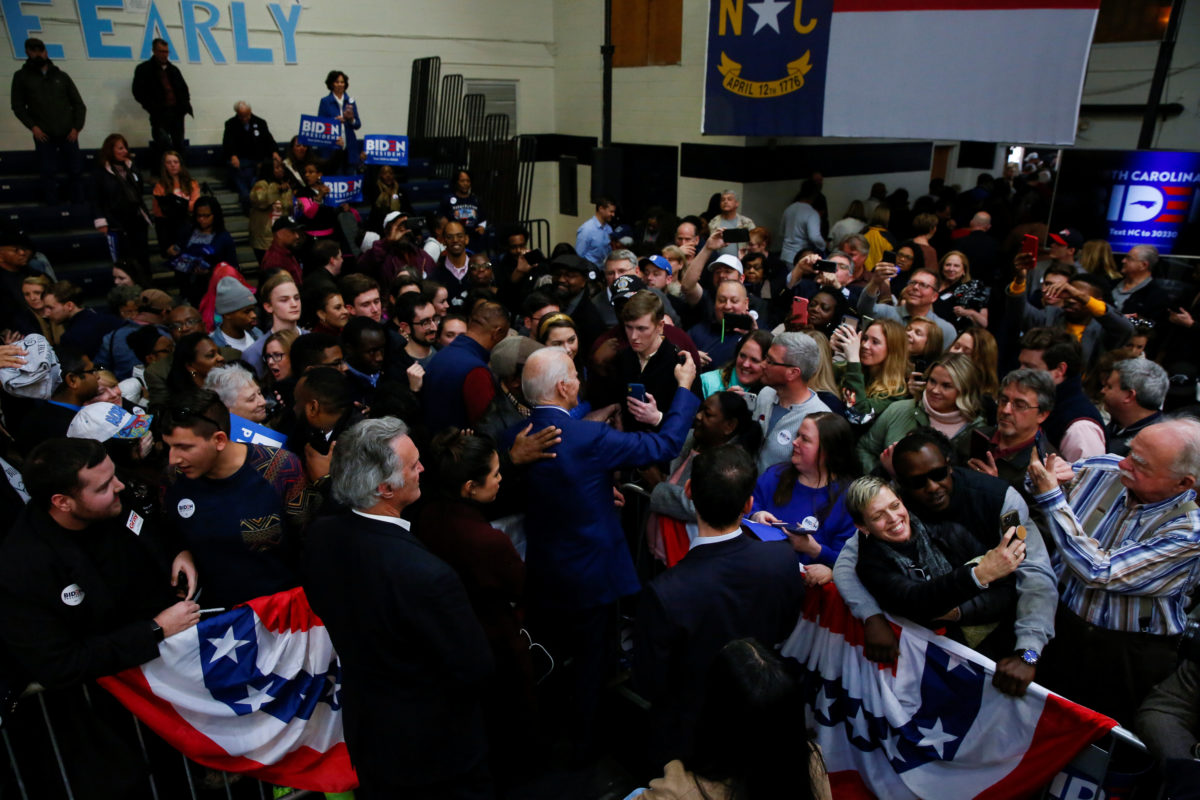 The Associated Press declared Biden the winner just after the polls closed in South Carolina. The AP based the call on data from AP VoteCast, a survey of the electorate conducted for the AP by NORC at the University of Chicago. The survey showed a convincing win for Biden.

Even before news of Biden’s win was declared, Mike Bloomberg announced his own plan to deliver a three-minute prime-time address Sunday night on two television networks. He didn’t say how much he paid for the air time, which is unprecedented in recent decades.

Bloomberg’s campaign privately acknowledged that Biden was likely to get a bump in momentum out of his South Carolina win, but they still believe Bloomberg can win in a handful of states that vote on Super Tuesday, including Arkansas, Alabama, Oklahoma, Virginia and North Carolina.

And Sanders was already peeking ahead to Super Tuesday as well, betting he can amass an insurmountable delegate lead at that point. After two consecutive victories and a tie for the lead in Iowa, the 78-year-old Vermont senator’s confidence is surging.

Sanders congratulated Biden on his first win and said it was nothing for his own supporters to worry about.

“Tonight, we did not win in South Carolina. That will not be the only defeat. A lot of states in this country. Nobody wins them all,” he told a cheering crowd in Virginia, one of 14 states to vote next week. “Now we enter Super Tuesday.”

Moments after Biden’s victory was confirmed, former Virginia Gov. Terry McAuliffe formally endorsed the former vice president and encouraged the Democratic Party’s moderate wing to unite behind him. On CNN, he called on several candidates to get out of the race — “not after Tuesday, but tomorrow.”

Compared to his rivals, he’s barely running any television advertising in Super Tuesday states. And both Sanders and Bloomberg have many more staff and volunteers.

With few other options, Biden’s team hopes to lean on his growing team of high-profile endorsers, including McAuliffe, to tap their own political networks and help spread his message in the media.

The Democrats’ 2020 primary election isn’t yet a two- or even three-person race.

Not ceding anything, Pete Buttigieg is fighting to prove he can build a multiracial coalition. And with the help of super PACs, Warren and Klobuchar vowed to keep pushing forward no matter what.

Trump was paying close attention to the Democratic race.

Speaking before conservative activists earlier in the day, the president conducted a poll of sorts by asking his audience to cheer for who would be the best Democratic contender for him to face in November.

Sanders was the clear winner.

“How could you be easier to beat than Joe? That guy can’t put two sentences together,” Trump told attendees of the Conservative Political Action Conference in suburban Washington. “But you know he is more down the middle. Everyone knows he’s not a communist and with Bernie there a real question about that.”

Saturday was all about Biden and whether he might convince anxious establishment Democrats to rally behind him at last.

Elected officials inclined to embrace his moderate politics had been reluctant to support him after bad finishes in Iowa and New Hampshire and a distant second place in Nevada last week. Yet fearing Sanders’ polarizing progressive priorities, they’re still searching for an alternative who’s viewed as a safer bet to defeat Trump in November.

South Carolina represented much more than the fourth state on the Democrats’ months-long primary calendar.

It served as the first major test of the candidates’ strength with African American voters, who will be critical both in the general election and the rest of the primary season.

Biden won 60% of the votes cast by African Americans. He also did well with older voters, women, moderates and conservatives and regular churchgoers, according to AP VoteCast.

VoteCast found that 45% voters in South Carolina wanted to return to the politics of the past, compared to about a third in Iowa and New Hampshire. That includes the roughly 50% of African American voters who said they want a Democratic presidential nominee who would emulate the Obama’s presidency.

Saturday’s election in South Carolina marks the first statewide test of its new fleet of electronic voting machines, a $50 million upgrade from an old and vulnerable system that lacked any paper record of individual votes. The new machines produce a paper record that can be verified by the voter and checked after the election to detect any malfunction or manipulation.

Speaking at a North Carolina Democratic Party fundraising gala, Perez noted that to win the nomination, a Democrat must win 1,991 delegates — and only a fraction of those have been allocated in the party’s first four primaries.