AUSTIN, Texas — Joe Biden ended a triumphant Super Tuesday with a narrow victory over Bernie Sanders in Texas, the giant red state where Democrats are seeking a rare return to power in 2020.

The former vice president’s victory over the Vermont senator capped a resounding and resurgent string of victories across the South for Biden, who won at least nine states but none bigger or more symbolic than Texas. Just 24 hours earlier in Dallas, Biden mounted a display of force by the Democratic Party’s moderate wing — revealing endorsements by former rivals Pete Buttigieg, Amy Klobuchar and Beto O’Rourke.

The primary put Texas’ fast-changing politics to the test and delivered some surprises. For Republicans, that included a rare loss for the Bush brand in the Lone Star State after Pierce Bush, a grandson of former President George H.W. Bush, failed to even make a runoff in a bid for Congress.

But for Texas Democrats, it meant seeing how far left voters would go before November.

“Things are looking awful good,” Biden told supporters in Los Angeles before the race in Texas was called in his favor. “For those who have been knocked down, counted out, left behind, this is your campaign.” 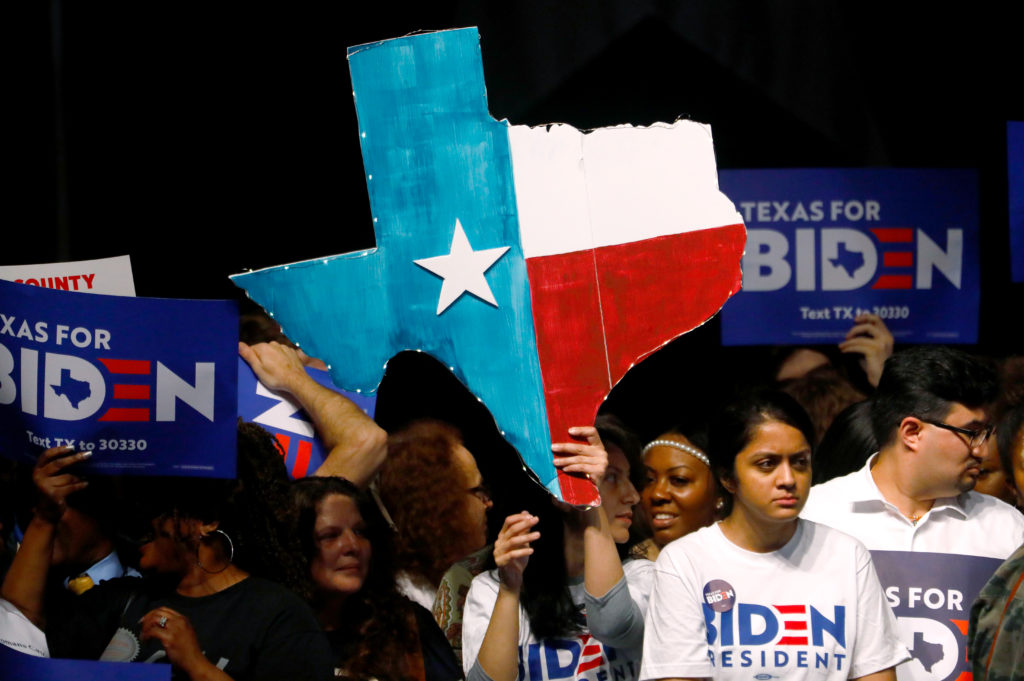 The last-minute gambit may have helped overtake Sanders, who had built a firm foothold in Texas just four years after badly losing the state to Hillary Clinton. Sanders was banking on young and Latino voters in booming Texas to accelerate his path to the nomination.

His rise emboldened an unusual crop of liberal challengers in Texas — and like Sanders, they were also coming running close into Wednesday.

In Texas’ Senate race, Democrat MJ Hegar awaited an opponent after advancing to a May runoff. Cristina Tzintzun Ramirez, who was endorsed by Rep. Alexandria Ocasio-Cortez, the progressive New York firebrand, was fighting to make the cut.

The winner of the Democratic Senate runoff will try to unseat Republican incumbent John Cornyn, who is seen as a heavy favorite in a state where a Democrat hasn’t won a Senate seat since the 1970s. The Senate race hasn’t mustered the same energy or attention as O’Rourke’s barnstorming run in 2018 against GOP Sen. Ted Cruz that became a launchpad the former congressman’s short-lived White House run.

And on the Texas border, Jessica Cisneros, 26, wasn’t yet out in her bid to become the youngest member of Congress in a challenge against Rep. Henry Cuellar, a rare Texas Democrat who has received support from the National Rifle Association.

Democrats are making fast gains in the nation’s biggest GOP stronghold and have a shot in November at taking control of the Texas House for the first time in 20 years. Reclaiming such power would swiftly change the landscape of one of the GOP’s most crucial states.

It’s an outcome that some conservative voters had on their minds as they went to the polls in Texas. Shelby Schnefke, a stay-at-home mother of two, said after casting her ballot in Dallas that the GOP needs to stay on guard against Democrats making further inroads.

“I feel like recently it’s been proven that it could happen,” Schnefke said. “I think that’s why it’s more motivating now than ever for Republicans to come out and vote because I think a lot of times in Texas you’re like, ‘Oh, we’re safe.’ But we definitely aren’t safe.’”

With the hotly contested presidential race topping the ballot, long lines at polling sites encouraged Democrats who are counting on record-shattering turnout across the state this fall.

Coronavirus fears resulted in a number of poll workers and elections judges not showing up for work in Austin, where there have been no confirmed cases. And in San Antonio, technical stumbles caused delays at some polling sites and reporting results in key races Wednesday.

In Houston, Rebecca Taylor tried voting in one of the city’s historically black neighborhoods where voters waited up to an hour. So she planned to go elsewhere to cast a ballot for Biden after also considering billionaire Mike Bloomberg, who made Houston a centerpiece of his half-billion dollar gambit to win the nomination despite skipping the first four states.

Taylor said she thought Sanders would scorch other Democrats on the Texas ballot in November if he’s the presidential nominee, and she expressed skepticism about whether he could deliver on his promises.

“I just don’t believe he can get in there and do what he says he’s going to do,” she said.

Associated Press writers Juan A. Lozano in Houston and Jake Bleiberg and Jamie Stengle in Dallas contributed to this report.