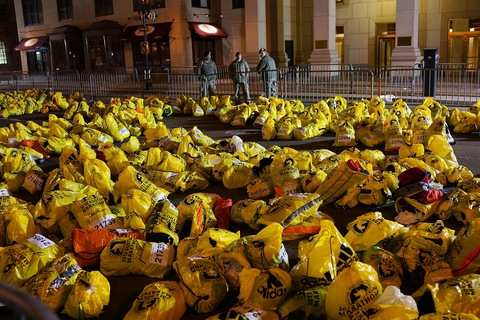 Unclaimed finish line bags remain at the scene of the blasts. Photo by Spencer Platt/Getty Images.

With more questions than answers in the hours since two explosions rocked the scene at the finish line of the Boston Marathon Monday, it’s unclear just yet how far-reaching the implications of the Patriots’ Day incident will be. Officials investigating the nature of the attack, and whether terrorists are responsible, have asked that metropolitan cities take precautions and be on alert.

Two bomb blasts, 12 seconds apart, rocked the finish line of the 117th running of the Boston Marathon Monday, killing at least three people, including an 8-year-old Dorchester boy, wounding more than 130, and leaving the sidewalks of Boylston Street covered in blood.

The explosions will almost certainly overtake whatever political developments might have been expected Tuesday as the nation continues to mourn the loss of life and laments the scores wounded, and as officials provide updates on the investigation that’s been described as “very active and fluid.”

All five candidates competing in the Massachusetts Senate special election primary contest scheduled for April 30 announced they had suspended their campaigns following the explosions. Republican candidate Gabriel Gomez, who ran in Monday’s marathon, finished before the blasts went off and was unharmed.

A planned news conference to reveal immigration reform legislation was postponed, and many events related to gun control votes on Capitol Hill were either delayed or called off.

House Speaker John Boehner, R-Ohio, led members in a moment of silence Monday evening, and President Barack Obama told the nation that politics would be pushed aside, for the time being.

“I’ve updated leaders of Congress in both parties, and we reaffirmed that on days like this there are no Republicans or Democrats — we are Americans, united in concern for our fellow citizens,” Mr. Obama said Monday night.

As it has following so many tragedies, the nation came together online for displays of tribute, from Boston-sports-themed images on Facebook to these images from the side of the Brooklyn Academy of Music in New York City put up by a public art group that sprang out of Occupy Wall Street in honor of Beantown and a thoughtful message once given by Fred Rogers.

Reports of runners heading immediately to the hospital to donate blood were among the most-shared, along with somber statistics like this one in the New York Times: “More than 23,000 people started the race in near-perfect conditions. Only about 17,580 finished.”

Mr. Obama was tested by a national incident once again, and the White House made sure reporters knew about a series of briefings, and released this photo of Mr. Obama speaking with FBI Director Robert Mueller.

An official told reporters that the president was updated about the response and investigation overnight by his assistant for Homeland Security and Counterterrorism Lisa Monaco. “The president made clear that he expects to be kept up to date on any developments and directed his team to make sure that all federal resources that can support these efforts, including the investigation being led by the FBI, be made available,” the official said. The president will get a briefing on the situation Tuesday morning and could address the American people once more.

In his brief, grim statement from the White House Monday, Mr. Obama thanked first responders and volunteers and lauded the New England city as “fiercely independent.”

“Boston is a tough and resilient town. So are its people,” Mr. Obama said. “I’m supremely confident that Bostonians will pull together, take care of each other, and move forward as one proud city. And as they do, the American people will be with them every single step of the way.”

The president stressed the situation is fluid and urged Americans seeking answers to be patient.

You can watch Mr. Obama’s statement in full here and watch our full and thoughtful coverage from the evening.

NewsHour production assistant Noreen Nasir was in Boston and spoke with us via telephone from the scene. Listen to that here. And Hari Sreenivasan interviewed a doctor who was five feet from the finish line about the horrific scene.

The NewsHour will keep you informed throughout the day and on the broadcast Tuesday night.

WHEN SCIENCE INTERSECTS WITH THE LAW

Can human genes be patented? That’s the central question before the Supreme Court as it considers arguments in a case involving genetic research for breast cancer that could have far-reaching consequences for medical research.

The NewsHour took a two-tiered look at the case. Marcia Coyle of the National Law Journal explained how the arguments evolved. Jeffrey Brown also spoke with Yale Cancer Center geneticist Ellen Matloff, one of the plaintiffs in the case, and Kevin Noonan, an intellectual property attorney.

Following events in Boston, planners of GW Parkway Classic in VA this Sunday say “additional enhancements” will be made to safety plan

During hard time like this the stronger stay together and our nation is the best at it… twitter.com/davidortiz/sta…

Public claims to the contrary notwithstanding, there’s not much evidence of higher security today on DC’s subway. twitter.com/SimonMarksFSN/…

The Gitmo detainee essay is the most-viewed article on NYTimes.com this morning. nyti.ms/11eAfvT

“Single journalists went on the most dates of any other surveyed occupation, with 25% going on four or more first dates in 2012” -@match