WASHINGTON (AP) — Top-level negotiations between Congress and the White House churned late into the night over a now nearly $2 trillion economic rescue package, as the coronavirus crisis deepened, the nation shut down and the first U.S. senator tested positive for the disease.

As President Donald Trump took to the podium in the White House briefing room and promised to help Americans who feel afraid and isolated as the pandemic spreads, the Senate voted Sunday against advancing the rescue package. But talks continued on Capitol Hill.

“I think you’ll get there. To me it’s not very complicated: We have to help the worker. We have to save the companies,” Trump said.

Later, the Republican president suggested the remedies may be more harmful than the outbreak, vowing to reassess after the 15-day mark of the shutdown. “WE CANNOT LET THE CURE BE WORSE THAN THE PROBLEM ITSELF,” he tweeted.

Inside the otherwise emptied out Capitol, the draft aid bill was declared insufficient by Democrats, who argued it was tilted toward corporations and did too little to help workers and health care providers. Republicans returned to the negotiating table.

“Our nation cannot afford a game of chicken,” warned Senate Majority Leader Mitch McConnell, R-Ky., his voice rising on the Senate floor Sunday night. His goal is to vote Monday. The Senate will re-convene at noon.

“This bill is going to affect this country and the lives of Americans, not just for the next few days, but in the next few months and years — so we have to make sure it is good, he said. ‘”There were some serious problems with the bill leader McConnell laid down. Huge amounts of corporate bailout funds without restrictions or without oversight — you wouldn’t even know who is getting the money. Not enough money for hospitals, nurses, PPE, masks, all the health care needs. No money for state and local government, many of whom would go broke. Many other things.”

But Schumer said they were making progress in dealing with those issues. “We’re getting closer and closer.
And I’m very hopeful, is how I’d put it, that we can get a bill in the morning.”

With a population on edge and shell-shocked financial markets poised for the new work week, Washington labored under the size and scope of the rescue package that’s more ambitious than any in recent times — larger than the 2008 bank bailout and 2009 recovery act combined.

Democrats say the largely GOP-led effort did not go far enough to provide health care and worker aid and fails to put restraints on a proposed $500 billion “slush fund” for corporations. They voted to block its advance.

Democrats won a concession — to provide four months of expanded unemployment benefits, rather than just three as proposed, according to an official granted anonymity to discuss the private talks. The jobless pay also extends to self-employed and so-called gig workers.

While the congressional leaders worked into the night, alarms were being sounded from coast to coast about the wave of coronavirus cases about to crash onto the nation’s health system.

New York City Mayor Bill de Blasio had dire, urgent news from the pandemic’s U.S. epicenter: “April and May are going to be a lot worse,” he said on NBC’s “Meet the Press.”

De Blasio, a Democrat, all but begged Washington to help procure ventilators and other medical supplies. He accused the Republican president of “not lifting a finger” to help. 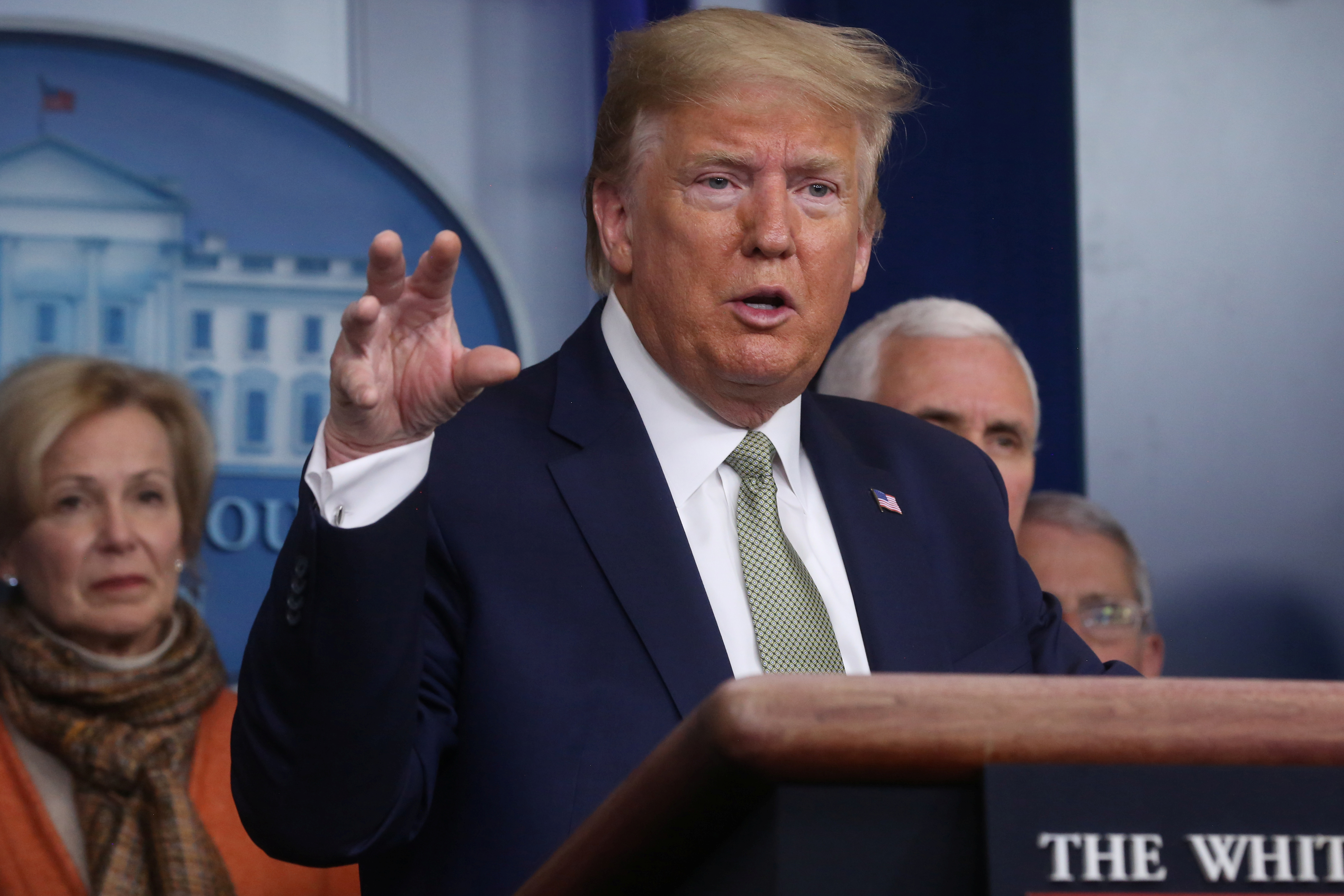 Trump urged Congress to get a deal done and, during the Sunday briefing, responded to criticism that his administration was sluggish to act. He cited his cooperation with the three states hardest hit — New York, Washington and California — and invoked a measure to give governors flexibility in calling up the national guard under their control, while the federal government covers the bill.

But even as Trump stressed federal-local partnerships, some governors, including Republican Greg Abbott of Texas, expressed unhappiness with Washington’s response. The president himself took a swipe hours earlier at Gov. J. B. Pritzker, D-Ill., saying that he and “a very small group of certain other Governors, together with Fake News” should not be “blaming the Federal Government for their own shortcomings.”

This came as Republican Sen. Rand Paul of Kentucky announced he tested positive for the coronavirus. Paul, who is a doctor and close ally of the president, said in a tweet he was not showing symptoms and was in quarantine.

Paul was seen at a GOP senators’ lunch on Friday and swimming in the Senate gym pool on Sunday morning, heightening concerns. His office said he left the Senate immediately after learning his diagnosis.

A growing list of lawmakers have cycled in and out of isolation after exposure, and two members of the House have said they tested positive. Five senators were in self-quarantine Sunday evening and could not vote.

In recent days, Trump invoked the Defense Protection Act, a rarely used, decades-old authority that can be used to compel the private sector to manufacture needed medical supplies like masks and ventilators.

Officials said Sunday that it would be used voluntarily and businesses would not be compelled to act.

“We are a country not based on nationalizing our business,” said Trump, who has repeatedly railed against socialism overseas and among Democrats.

Two days after he lashed out at a reporter who asked about his message to frightened Americans, Trump said,

“For those worried and afraid, please know as long as I am your president, you can feel confident that you have a leader who will always fight for you.”

But minutes later, when he learned that rival Sen. Mitt Romney, R-Utah, was one of those in isolation, he declared, “Romney’s in isolation? Gee, that’s too bad.”

Trump said he was not being sarcastic.

The urgency to act is mounting, as jobless claims skyrocket and the financial markets are set to re-open Monday eager for signs that Washington can soften the blow of the healthcare crisis and what experts say is a looming recession. Stock futures declined sharply as Trump spoke Sunday evening.

Officials late Sunday put the price tag of the ballooning rescue package at nearly $2 trillion. That does not include additional measures being taken by the Federal Reserve to shore up the economy.

Treasury Secretary Steven Mnuchin, who was leading a third day of nonstop talks on Capitol Hill, said the plan was meant to prop up the nation’s weakened economy for the next 10 to 12 weeks.

Central to the package is as much as $350 billion for small businesses to keep making payroll while workers are forced to stay home. There is also a one-time rebate check of about $1,200 per person, or $3,000 for a family of four, as well as the extended unemployment benefits.

Hospitals, Mnuchin said, will get approximately $110 billion for the expected influx of sick patients.

The treasury secretary said a significant part of the package will involve working with the Federal Reserve for up to $4 trillion of liquidity to support the economy with “broad-based lending programs.”

But Democrats, including House Speaker Nancy Pelosi, have pushed for add-ons, including food security aid, small business loans and other measures for workers.

They warned the draft plan’s $500 billion for corporations does not put enough restraints on business, saying the ban on corporate stock buy-backs is weak and the limits on executive pay are only for two years.

The president, when pressed by a reporter, dodged a question as to whether his own business would seek federal funds.

With Sunday’s failed vote, McConnell angrily blamed Pelosi, who returned to Washington for a top-level meeting, saying she “poured cold water” over the draft plan. But any measure from the Senate also needs to pass the House.

The details are coming from drafts of both bills circulating among lobbyists but not yet released to the public. They were obtained by The Associated Press.

The vast majority of people recover from the new virus. According to the World Health Organization, people with mild illness recover in about two weeks, while those with more severe illness may take three to six weeks to recover.