A day at CPAC, where fringe meets the establishment GOP

The annual Conservative Political Action Conference began in earnest Thursday with an off-key rendition of the Star Spangled Banner, a prayer and the blasting of DJ Diplo’s song “Revolution.” The day ended with Vice President Mike Pence addressing attendees over dinner.

WATCH: At CPAC, Vice President Pence says the ‘Obamacare nightmare is about to end’

In between, Richard Spencer, a leader of the so-called “alt-right,” was escorted off the premises, counselor to the president Kellyanne Conway got a standing ovation after critiquing traditional notions of feminism, and the “lamestream media” and “fake climate news” were roundly criticized in panels. Recurring themes of the day included poking fun at Democrats and the press, warning of threats to free speech by the “snowflakes” on the left and debates over what defined a conservative today.

Just more than a month after President Donald Trump took the oath of office, many speakers argued that even though Trump had been a flawed candidate — and perhaps so far an imperfect president — it was time to unify behind him.

The morning kicked off with Conway, who spoke about being a conservative woman in power — one who didn’t see herself as a feminist.

“It’s difficult for me to call myself a feminist in the classic sense because it seems to be very anti-male and it certainly is very pro-abortion,” Conway said in an early-morning talk. “I look at myself as a product of my choices, not a victim of my circumstances.” 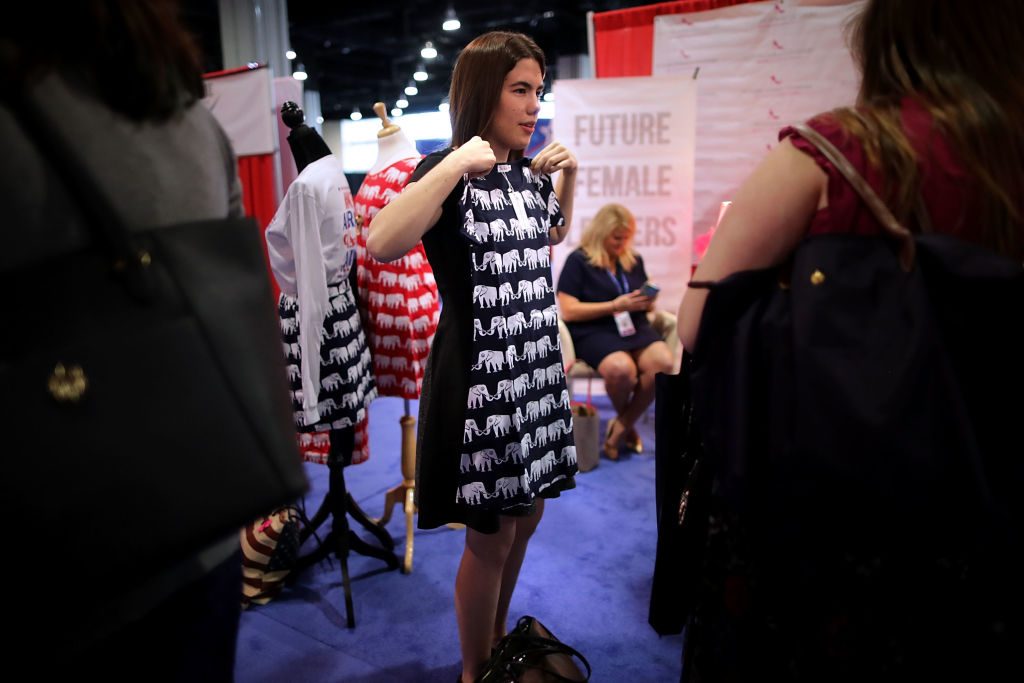 A young woman looks at a dress with an elephant pattern for sale in the Exhibitor Hub on Feb. 23 during the first day of the Conservative Political Action Conference at the Gaylord National Resort and Convention Center in National Harbor, Maryland. Photo by Chip Somodevilla/Getty Images.

That message resonated strongly with Lauren Dooley, a 19-year-old student at Texas Christian University and blogger at the millennial site “Carpe Freedom,” which focuses on freedom of speech on college campuses. “I think conservative women, and conservatives in general, are a little more empowered now that the election is over,” Dooley said. Women like her “have more confidence they won’t be slammed for their views publicly,” she added.

Meanwhile, Ashton Belk, the director of events for the conservative Centennial Institute at Colorado Christian University, said she liked what she saw of Conway. “She was warm, articulate, less-defensive, and seemed more open” than the Conway who regularly defended Trump on national television, said Belk, who came to CPAC to recruit speakers for her institute’s annual conference.

After Conway came a panel that criticized the alt-right, a term that’s come to describe a mix of populist, white nationalist and neo-Nazi beliefs. Dan Schneider, executive director of the American Conservative Union, which hosts CPAC, told attendees that “the alt-right ain’t right.”

“There is a sinister organization trying to worm its way into our ranks,” he said. “But they are not part of us.”

Spencer, the alt-right leader, criticized the speech in real-time on Twitter from his seat in the audience. “First they ignore you. Then they laugh at you. Then they fight you. Then you win,” Spencer wrote. Afterwards, Spencer was surrounded by a media scrum for over an hour in a hallway outside of the main speaker’s ballroom before security eventually removed him from the conference.

First they ignore you.

Then they laugh at you.

Then they fight you.

Zac Davenport, a student from Spring Arbor, Michigan and member of the college Republicans group at his university, watched unhappily as Spencer receive outsized media attention.

“All it does is poorly represent the people who come to CPAC,” he said. But Davenport did believe free speech — including by provocateurs — needed defending. Davenport said he believes free speech is threatened across the country, including at his tiny Christian university, where he claims liberal faculty often dismiss conservative viewpoints in the classroom.

Free speech had been a hot topic leading up to CPAC. The conservative instigator Milo Yiannopoulos was slated for a talk on the right to free speech at the conference, but CPAC canceled his appearance after his comments defending pedophilia surfaced online. (Yiannopoulos’ book was also canceled, as was his employment at Breitbart News.) 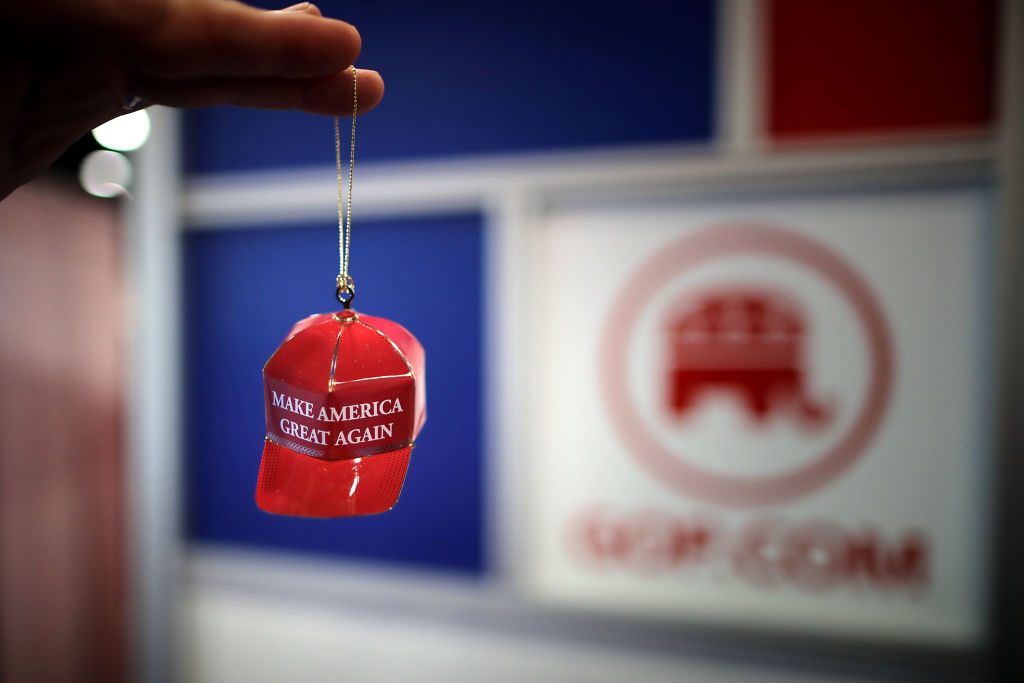 At a nearby Facebook Live pop-up studio, Andy Stone, a Facebook communications representative, listened as a man in a “MAGA” hat demanded to know why the platform banned or suppressed controversial conservative voices, while favoring liberals. “Speech on our platforms has to conform to our standards,” Stone said, with growing impatience.

On Wednesday, though, Facebook showed its willingness to augment conservative voices. Not only did the social media platform set up shop at CPAC, but it also recently donated $120,000 to the ACU — a move that upset both liberal and technology websites.

In a smaller room down the hall, at a panel on “fake news and the lamestream media,” Elie Ashery, who works in programmatic advertising, complained that conservative media was also being suppressed in the world of advertising. “They’re purposely blacklisting [conservative sites],” like World Net Daily and InfoWars, he said. “They’re choking off funding. It’s a very scary situation.”

In a panel later in the day, chief White House strategist Steve Bannon repeated his call for conservatives to fight the mainstream media.

“They’re corporatist, globalist media that are adamantly opposed to an economic nationalist agenda like Donald Trump has,” Bannon said.

Bannon, in a rare public appearance, spoke alongside White House chief of staff Reince Priebus and ACU Chairman Matt Schlapp. Bannon and Priebus exchanged several compliments, presenting a picture of unity for a White House that has been mired by infighting.

CPAC’s first day was not a complete show of unity for Trump, however. Some panelists voiced concern about his rhetoric, including Larry Arnn, the president of right-leaning Hillsdale College, who said “we don’t teach our students at Hillsdale College to act the way he does.” And some attendees expressed uncertainty about the president’s policies. “He tried to follow through on his campaign promises too quickly. I’d like to see a little bit of a breather,” said Andrew Dale, a 62-year-old Trump voter whose son bought him a ticket to CPAC for his birthday.

But largely, after years of occupying the role of underdog, Republicans at CPAC were clearly taking a victory lap Thursday, one that will likely continue on Friday, when Trump is scheduled to address the conference.

“Democrats are in denial and they’re angry,” Sen. Cruz told a packed room Thursday. When asked to describe the Democratic base today, Cruz had a phrase ready: “bat-trap crazy.”

Left: Josh Platillero (R) of Knoxville, Tennessee, poses for a photograph as he hands out flyers about conservative job consultations Feb. 23 during the first day of the Conservative Political Action Conference at the Gaylord National Resort and Convention Center in National Harbor, Maryland. Photo by Chip Somodevilla/Getty Images.