SAN FRANCISCO — More than a dozen Democratic presidential hopefuls have flocked to California for the chance to make their cases to thousands of activists in the nation’s largest liberal stronghold.

Candidates held rallies across the state before descending on San Francisco for a three-day gathering of the California Democratic Party.

Home-state Sen. Kamala Harris looked to make a show of force while Sen. Bernie Sanders, the Vermont independent who vied for the Democratic nomination in 2016, hoped to build on the fervent support he received in California during that race. Twelve others in the 2020 pack hoped to introduce themselves and spark interest among the party’s most faithful voters.

“I’m here again, to ask for you to stand with me in a fight,” Harris told union workers on Saturday morning, before the party convention. She reminded them of her record while she was California’s attorney general and highlighted her campaign proposals to support working families.

At the convention hall, dozens of Harris supporters chanted her name and waved signs.

Sanders received an enthusiastic reception Friday night at a meeting of the Chicano-Latino caucus, which endorsed him during the close 2016 contest with Hillary Rodham Clinton.

“This time we are going to win California,” he declared.

California has shifted its 2020 primary earlier on the calendar, to March 3, part of the Super Tuesday collection of contests, in hopes of giving the state more sway in choosing the party’s nominee. California will offer the largest delegate haul. 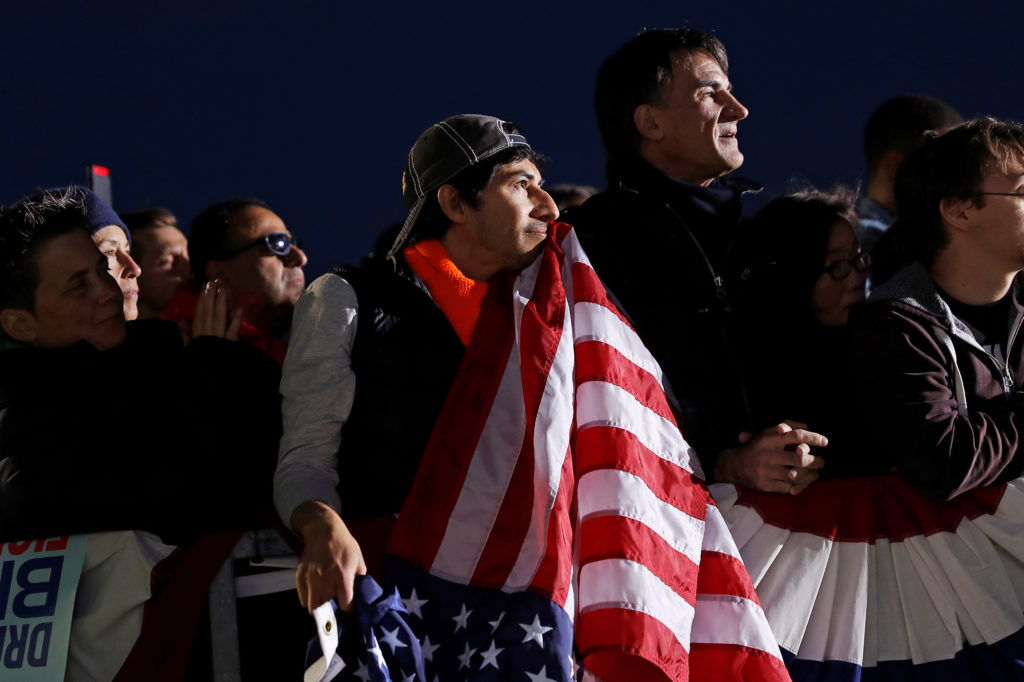 Air Force veteran Gerardo Marin holds a U.S. flag during a town hall event at Laney College in Oakland, on May 31. Photo by Stephen Lam/Reuters

Among the major contenders seeking to challenge President Donald Trump, only former Vice President Joe Biden declined to attend the California convention. He was scheduled to speak at a Human Rights Campaign event in Ohio on Saturday night.

Candidates usually rely heavily on California, home to Hollywood and Silicon Valley, to raise campaign cash. But the earlier primary is so far leading some candidates to spend more time in front of rank-and-file voters. Massachusetts Sen. Elizabeth Warren held a rally before thousands of voters in San Jose on the eve of the convention’s main program.