WASHINGTON (AP) — It’s been more than a year in the making and has seen plenty of ups and downs. Now, a Democratic economic package focused on climate and health care faces hurdles but seems headed toward party-line passage by Congress next month.

Approval would let President Joe Biden and his party claim a triumph on top priorities as November’s elections approach. They have not forgotten that they came close to approving a far grander version of the bill last year, only to see Sen. Joe Manchin, D-W.Va., one of their most conservative and contrarian members, torpedo it at the eleventh hour.

This time, Senate Majority Leader Chuck Schumer, D-N.Y., has crafted a compromise package with Manchin, to the surprise of everyone, transforming the West Virginian from pariah to partner. The measure is more modest than earlier versions but still checks boxes on issues that make Democrats giddy.

Here’s what they face:

The measure would raise $739 billion in revenue over 10 years and spend $433 billion. More than $300 billion would be left for trimming federal deficits.

Those are meaningful cuts in red ink. But they’re tiny compared with the $16 trillion in new debt the nonpartisan Congressional Budget Office estimates will accumulate over the next decade.

The package would save consumers and the government money by curbing prescription drug prices, and it would subsidize private health insurance for millions of people. It would bolster the IRS budget so the tax agency can collect more unpaid taxes.

WATCH: What the Senate deal could mean for the fight against climate change

The plan would foster clean energy and offshore energy drilling, a balance demanded by Manchin, a champion of fossil fuels. It also would collect new taxes from the largest corporations and wealthy hedge fund owners.

It’s a fraction of the $3.5 trillion package that Biden proposed early in his presidency, which also envisioned sums for initiatives such as paid family leave and universal preschool. It’s also smaller than the roughly $2 trillion alternative the House passed last November after Manchin demanded cuts then derailed the deal anyway, citing inflation fears.

… will it do that? It certainly could, but there are dissenters.

“Improved tax collection, drug savings, and deficit reduction would put downward pressure on inflation,” the Committee for a Responsible Federal Budget said Friday. In what passes for a rave review, the bipartisan fiscal watchdog group called the legislation “exactly the kind of package lawmakers should put in place to help the economy in a number of ways.”

“Deficit reduction is almost always inflation-reducing,” Jason Furman, a Harvard University economics professor who was a top economic adviser to President Barack Obama, wrote Friday in The Wall Street Journal. He said the measure would also “reduce inflation by slowing the growth of prescription-drug prices.” 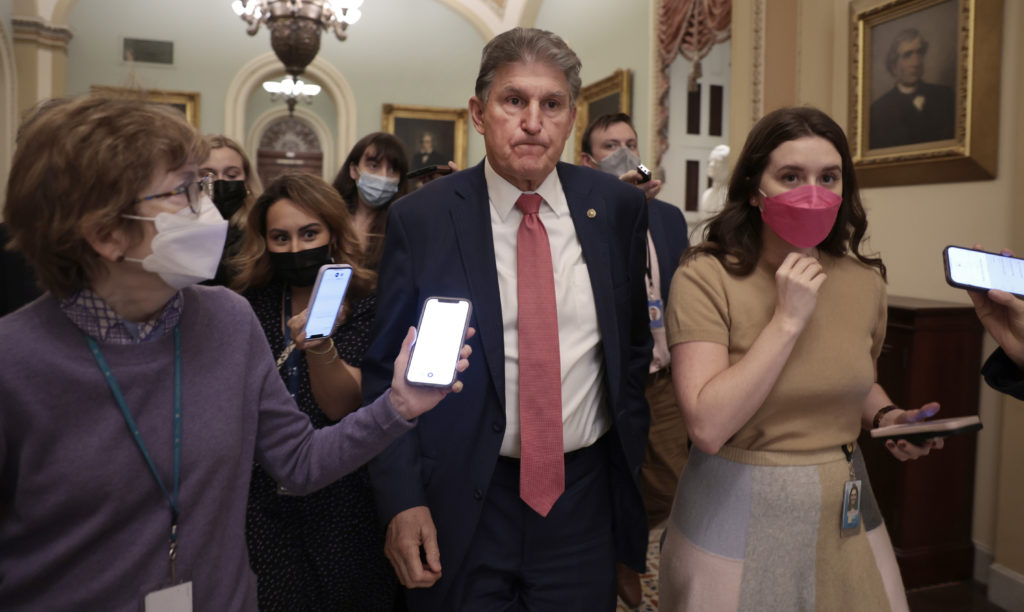 Sen. Joe Manchin (D-WV) is followed by reporters as he leaves a caucus meeting with Senate Democrats at the U.S. Capitol Building on December 17, 2021 in Washington, DC. Photo by Anna Moneymaker/Getty Images.

“The act would very slightly increase inflation until 2024 and decrease inflation thereafter,” the group wrote Friday. “These point estimates are statistically indistinguishable from zero, thereby indicating low confidence that the legislation will have any impact on inflation.”

Schumer said this past week that Democrats planned to add language aimed at reducing patients’ costs of insulin, the diabetes drug that can cost hundreds of dollars monthly.

Insulin price curbs were a highlight of Democrats’ bigger package last year, including a $35 monthly cap for patients who get the drug through Medicare or private insurers. But that fell out this year as the measure was trimmed. 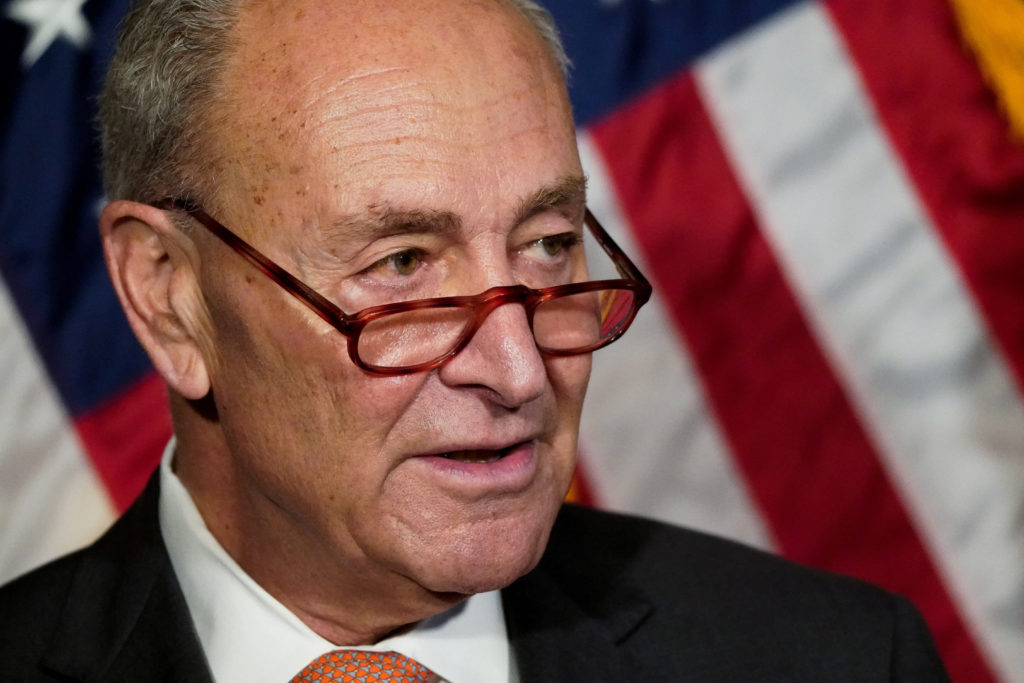 Sens. Jeanne Shaheen, D-N.H., and Susan Collins, R-Maine, have produced a bill capping insulin’s price. That measure’s prospects diminished after the nonpartisan Congressional Budget Office estimated it would cost about $23 billion and actually increase the price of insulin. The two lawmakers also haven’t produced the 10 Republicans who would be needed to succeed in the 50-50 Senate, where most bills need 60 votes.

It’s unclear what the Democrats’ new insulin language would do. Prior language that required private insurers to set a $35 monthly insulin cap may violate the chamber’s rules, which only allow provisions primarily affecting the federal budget.

In addition, under the process Democrats are using to move the measure through the chamber by a simple majority, with Vice President Kamala Harris’ tiebreaking vote, it would face multiple amendments in a voting session that can run through the night, and there is no telling whether some will pass.

Every Republican seems poised to vote “no.”

Democrats will need all 50 of their own votes in the Senate, where unpredictable Sen. Kyrsten Sinema, D-Ariz., has yet to state her view.

Democrats can lose no more than four House votes to succeed there. Speaker Nancy Pelosi, D-Calif., said Friday that when the Senate approves the package, “We’ll pass it.”

Schumer wants Senate passage next week. He acknowledged that timeline is “going to be hard” because it will take time for the chamber’s parliamentarian to make sure the bill conforms to Senate rules.

This will also take luck. All 50 Democrats, including both independents who support them, will have to be healthy enough to show up and vote.

That’s not guaranteed. The latest, extremely contagious COVID-19 variant is spreading around the country. And the chamber has 33 senators who are 70 years old or more, including 19 Democrats.

Sen. Richard Durbin, D-Ill., 77, was the latest senator to announce he’d contracted the disease. Sen. Patrick Leahy, D-Vt., 82, has been out after hip surgery. Both are expected back next week.

Left: A general view of the U.S. Capitol dome ahead of the opening public hearing of the U.S. House Select Committee to Investigate the January 6 Attack on the United States Capitol, on Capitol Hill in Washington, U.S., June 9, 2022. REUTERS/Elizabeth Frantz