WASHINGTON — Democrats have powered a massive $3 trillion coronavirus relief bill through the House, an election-year measure designed to brace a U.S. economy in free fall and a health care system struggling to contain a pandemic still pummeling the country.

Friday’s 208-199 vote, with all but one Republican opposed, advances what boils down to a campaign-season display of Democratic economic and health-care priorities. It has no chance of becoming law as written, but will likely spark difficult negotiations with the White House and Senate Republicans. Any product would probably be the last major COVID-19 response bill before November’s presidential and congressional elections.

The enormous Democratic measure would cost more than the prior four coronavirus bills combined. It would deliver almost $1 trillion for state and local governments, another round of $1,200 direct payments to individuals and help for the unemployed, renters and homeowners, college debt holders and the struggling Postal Service.

“Not to act now is not only irresponsible in a humanitarian way, it is irresponsible because it’s only going to cost more,” warned House Speaker Nancy Pelosi, D-Calif. “More in terms of lives, livelihood, cost to the budget, cost to our democracy.”

Republicans mocked the bill as a bloated Democratic wish-list that was dead on arrival in the GOP-led Senate and, for good measure, faced a White House veto threat. Party leaders say they want to assess how $3 trillion approved earlier is working and see if some states’ partial business reopenings would spark an economic revival that would ease the need for more safety net programs.

Republicans are also sorting through internal divisions and awaiting stronger signals from President Donald Trump about what he will support.

“Phase Four is going to happen,” Trump told reporters in the Oval Office, using Washington insider-speak for the measure. “But it’s going to happen in a much better way for the American people.”

Trump and top Republicans like Senate Majority Leader Mitch McConnell, R-Ky., are insisting the next measure should protect reopening businesses from liability lawsuits. The president is also demanding a cut to payroll taxes, but GOP leaders are not yet onboard. 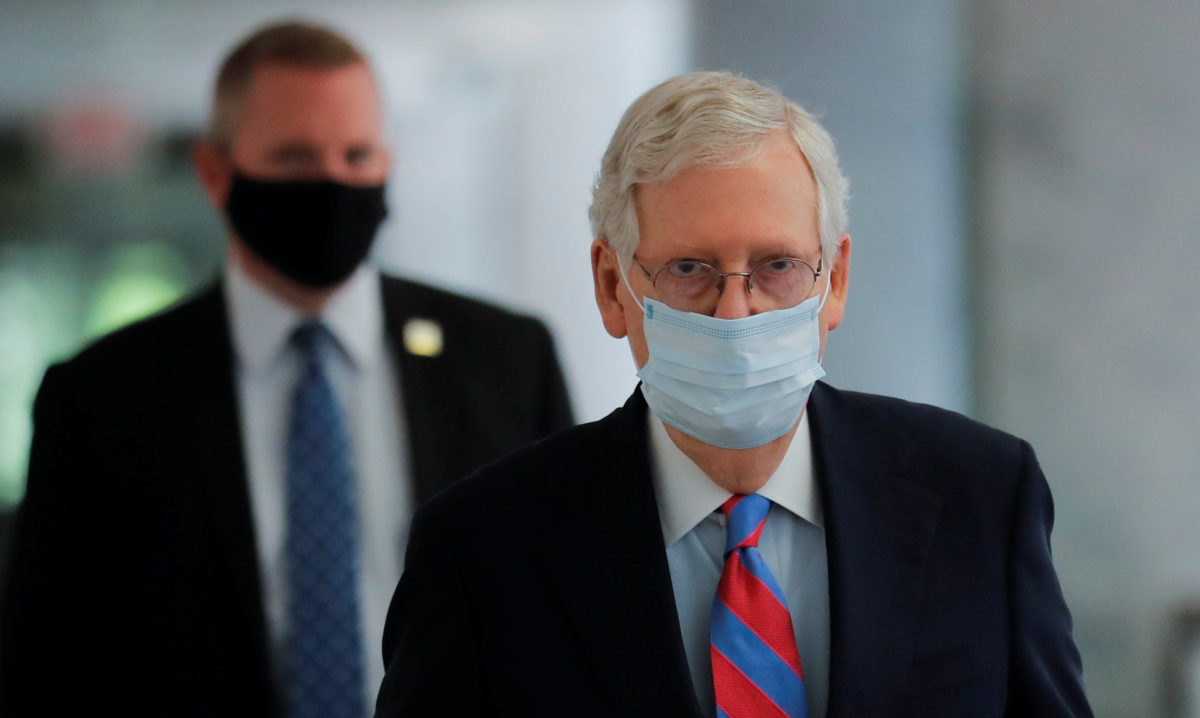 U.S. Senate Majority Leader Mitch McConnell (R-KY) wears a protective face mask as he walks down a hallway of the Hart Senate Office Building during the coronavirus disease (COVID-19) outbreak on Capitol Hill in Washington, U.S., May 12, 2020. Photo by Carlos Barria/Reuters.

The daylong debate painted a Capitol scene that’s become common in the era of coronavirus, even as it remains disconcerting. The sparsely populated House floor was dotted with lawmakers and aides wearing protective masks and even gloves, though some Republicans lacked them.

Many members looked shaggier and sported beards they had not worn weeks ago. Roll call votes lasted over an hour each because lawmakers were voting in small groups to limit crowding.

To enhance the bill’s political impact, Democrats named their measure “The Heroes Act” for the payments it would provide front-line emergency workers. With more than 86,000 Americans dead, 1.4 million confirmed infections and 36 million filing unemployment claims in an frozen economy, Democrats saw GOP opposition as an easy campaign-season target.

“Are you kidding me?” said Rep. Tim Ryan, D-Ohio, of Republican assertions that it was time to stop spending more money. “Where do you guys live? Food lines at our food banks around the block? In the United States of America?”

Republicans saw the bill as a Democratic political blunder. They said overly generous unemployment benefits discouraged people from returning to work, and attacked language helping immigrants in the U.S. illegally get federal benefits. They also singled out provisions helping states set up voting by mail and easing the marijuana industry’s access to banks.

Pelosi pushed the measure through after overcoming party divisions aggravated by election pressures. Some moderate Democrats opposed the package for its price tag and politically fraught provisions like assisting marijuana businesses. A few progressive Democrats were upset because it did not do more, such as guaranteeing workers’ salaries and bolstering their health insurance coverage.

Fourteen Democrats voted against the measure. Nearly all are centrists and number among the party’s most vulnerable lawmakers in November’s elections: freshmen from districts Trump won in 2016.

Among them was Rep. Cindy Axne of Iowa, who labeled the measure “bloated.” Another, Rep. Abigail Spanberger of Virginia, tweeted, “This bill strays far beyond delivering relief or responding to an urgent crisis, & it has no chance at becoming law.”

Republicans were already planning to use the day’s votes against other moderate Democrats who backed Friday’s legislation and face competitive reelection races.

Republicans leaders faced disunity between conservatives who feel enough has been done and pragmatists who back rescuing the Postal Service from looming insolvency and delivering cash to revenue-starved state and local governments. The huge price tag and a lack of consultation with Republicans by Pelosi cemented GOP opposition.

“This bill is nothing more than the Democratic policy agenda masquerading as a response to the coronavirus crisis,” said Rep. Tom Cole, R-Okla. He said the bill is “going nowhere, and is going nowhere fast.”

Liberal Rep. Pramila Jayapal, D-Wash., also opposed the bill. She told reporters that if constituents ask her if the bill would put money in their pockets or preserve their health care, “I can’t tell them yes.”

The lone Republican backing the legislation was Rep. Peter King of New York, who is retiring.