Despite Iowa missteps, most Americans not worried about election security

Weeks after the Iowa caucuses dissolved into confusion over who won the first contest in the race to the White House, Americans are largely unfazed about election security, according to the latest poll from PBS NewsHour, NPR and Marist.

Roughly three-quarters of Americans — 72 percent — said they are confident that their state and local elections will be fair and accurate this November, while another quarter were not as assured.

Technical glitches riddled this year’s Iowa caucuses, when, for the first time, the Iowa Democratic Party used an app in hopes of gleaning results faster. But the app malfunctioned and results took days to retrieve. When former South Bend, Indiana, Mayor Pete Buttigieg appeared to sneak ahead of Sen. Bernie Sanders, I-Vt., the Associated Press said the 0.09 percentage points separating the two candidates was too close to declare a winner. Democratic National Committee Chair Tom Perez called for a recanvass, and Iowa’s Democratic Party leader Troy Price resigned as a result of the confusion. Late Tuesday, new results were released showing Buttigieg and Sanders in a near tie, and the Sanders campaign said it would ask for a more thorough recount.

When asked about their confidence in election security, political affiliation did not seem to factor significantly in how respondents answered. Democrats, Republicans and independents responded to the question roughly the same.

Another area of consensus: Two-thirds of Americans say they think the economy is working well for them. But whether President Donald Trump is responsible for that economic well-being is more divisive. Fifty-one percent of U.S. adults say they think Trump has handled the economy well, while 40 percent disagree and another 9 percent said they don’t know. 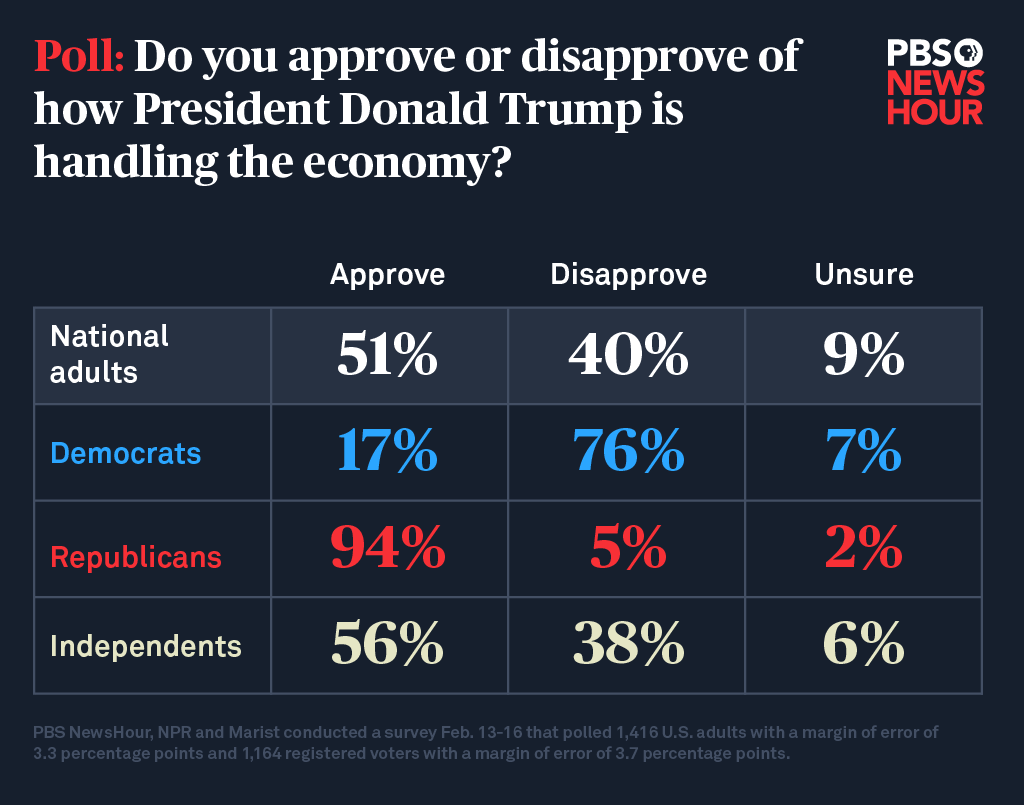 The latest jobless rate dropped to 3.6 percent, according to the Bureau of Labor Statistics, continuing a downward trend that began under former President Barack Obama, and started from a high of 9.9 percent in March 2010, during the Great Recession.

In 2020, 21 states have raised their minimum wage, according to the National Conference of State Legislatures. Overall wages this year are expected to creep up to 3.3 percent, according to a July survey from the Society for Human Resource Management.

READ MORE: Trump is betting on the economy. Is it enough to win reelection?

With the election less than a year away, Trump is touting his economic record, including promoting notable gains in his State of the Union earlier this month. But so far, that hasn’t translated into extra political capital for him. Forty-two percent of U.S. adults said they support Trump’s performance as president. Significantly more people — 51 percent — said they disapprove of his time in the Oval Office so far.

Additionally, half of Americans said they think the country is going in the wrong direction, while another 41 percent said they approve of the current path the U.S. is taking. Americans, however, have been fairly pessimistic about the nation’s direction for nearly two decades, regardless of who occupied the White House. 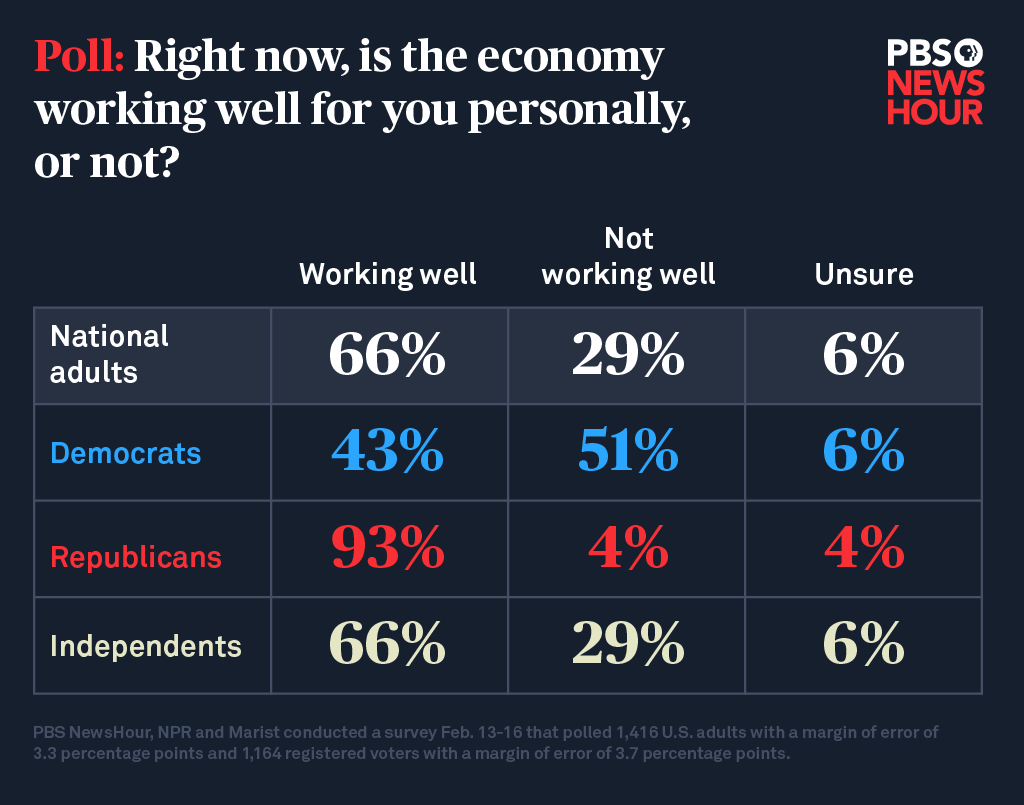 Given people’s fairly positive opinion about the economy, Trump’s lower approval rating suggests a disconnect “between how people are feeling about their own economic well-being, how the country is moving, and just the fact that they think he’s doing a good job on the economy,” said Barbara Carvalho, director of the Marist Poll. She added that, in this poll, “We see a very polarized and partisan context.”

Americans are not “connecting the economy to” Trump, said Democratic strategist Jennifer Holdsworth. She suggested the economic confidence numbers reflect people’s sense of big-picture indicators, such as the stock market or consumer confidence, but “don’t really get into the actual kitchen-table issues,” like rising health care costs, college debt and escalating housing prices.

“If the economy stays vibrant, it’ll come down to a choice in November,” Carvalho said.

Left: There are some things Americans still agree on: the economy and election security, according to the latest poll from the PBS NewsHour, NPR and Marist.