Bloomberg qualifies for debate, Sanders leads ahead of Nevada caucuses

Former New York City Mayor Michael Bloomberg is second only to Sen. Bernie Sanders, I-Vt., in the latest poll from PBS NewsHour, NPR and Marist, surging ahead of most Democratic rivals among left-leaning voters and essentially guaranteeing him a spot on this week’s presidential debate stage.

Nearly a third of Democrats and Democratic-leaning independents — 31 percent — said they supported Sanders when asked whom they would vote for if they had to decide today. Another 19 percent of left-leaning voters said they backed Bloomberg, who only officially filed to run for president in November, and skipped the first contests in Iowa and New Hampshire. In those weeks, however, Bloomberg launched an estimated $300 million ad campaign, with plans to spend exponentially more.

In the poll, Sanders and Bloomberg were followed by former Vice President Joe Biden, who notched 15 percent, and Sen. Elizabeth Warren, D-Mass., with 12 percent. 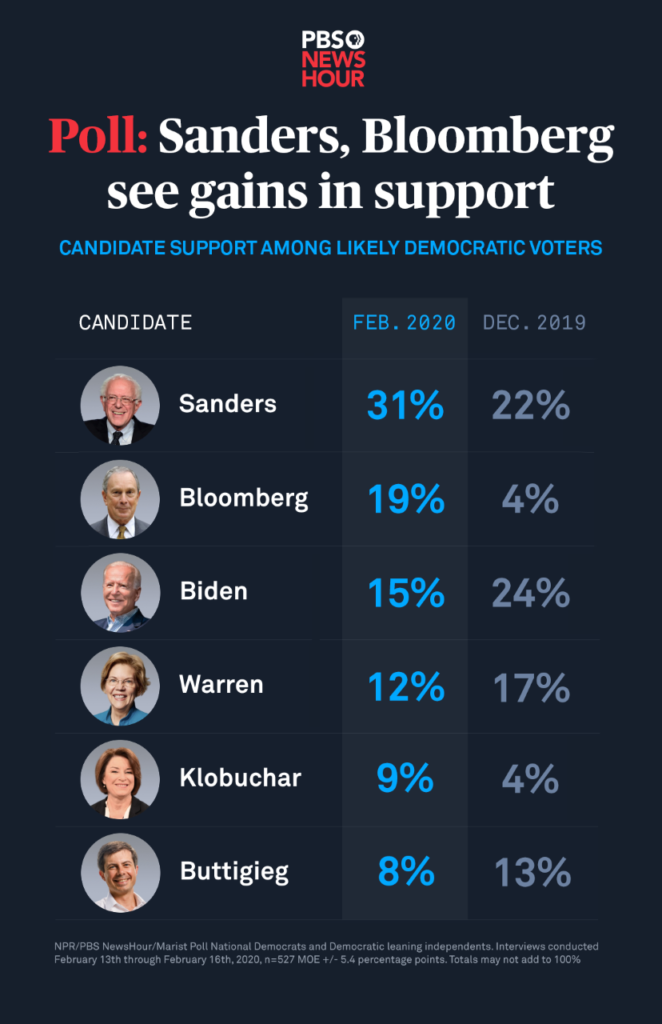 Bloomberg’s gain was especially significant. In December, only 4 percent of left-leaning voters said they would vote for his White House bid. Sanders also enjoys more support than two months ago, when he was at 22 percent. Meanwhile, Biden and Warren have slipped in voter preferences, down from 24 percent and 17 percent respectively back in December.

These results come the day before Democratic presidential candidates are scheduled to debate for the ninth time in Las Vegas. So far, Bloomberg hasn’t officially qualified to stand on this week’s debate stage, based on rules set by the Democratic National Committee. Among other rules to earn a spot, Bloomberg would have to earn at least 10 percent in four national polls recognized by the DNC. The committee also eliminated the requirement that candidates must receive hundreds of thousands of dollars of grass-roots donations in order to qualify for the debate stage.

Based on news analysis, this poll helps Bloomberg qualify to participate in the next debate, but the DNC will officially announce who gets to stand on the stage early Wednesday.

“Our campaign is seeing a groundswell of support across the country, and qualifying for the February 19 debate is the latest sign that Mike’s plan and ability to defeat Donald Trump is resonating with more and more Americans,” said Kevin Sheekey, Bloomberg’s 2020 campaign manager in a released statement.

The debate will be the first since the Iowa caucuses and New Hampshire primaries, after which multiple candidates left the field.

As the presidential race ramps up, fewer candidates remain in the once-crowded competition. In the eyes of registered voters, how do the candidates who are still in the fight fare against President Donald Trump?

Will that candidate appear in Las Vegas during this week’s debate? It is too soon to say, given how volatile this campaign has already been.

Left: Nearly a third of Democrats and Democratic-leaning independents -- 31 percent -- said they supported Sanders when asked whom they would vote for if they had to decide today.