Despite widespread economic hardship, most Americans not ready to reopen, poll says

While a growing number of American households have lost jobs due to COVID-19, a majority of U.S. adults say they still are uncomfortable with reopening the country, according to the latest PBS NewsHour/NPR/Marist poll.

Since March, the nation’s economy has taken a major hit from stay-at-home orders and other measures taken to slow the spread of COVID-19. As a result, roughly 26 million Americans filed first-time unemployment claims over five consecutive weeks in late March and April, according to the latest Department of Labor figures, making this one of the worst economic periods in the nation’s history.

Americans are split in how they view President Donald Trump’s handling of the economy, the poll suggested, with 50 percent of U.S. adults saying they approved and 48 percent that they disapproved with relatively little change since March when businesses around the country began to shutter. When asked about how the president has handled the coronavirus pandemic, 55 percent of Americans said they do not think he is doing a good job, up slightly from 49 percent in March. 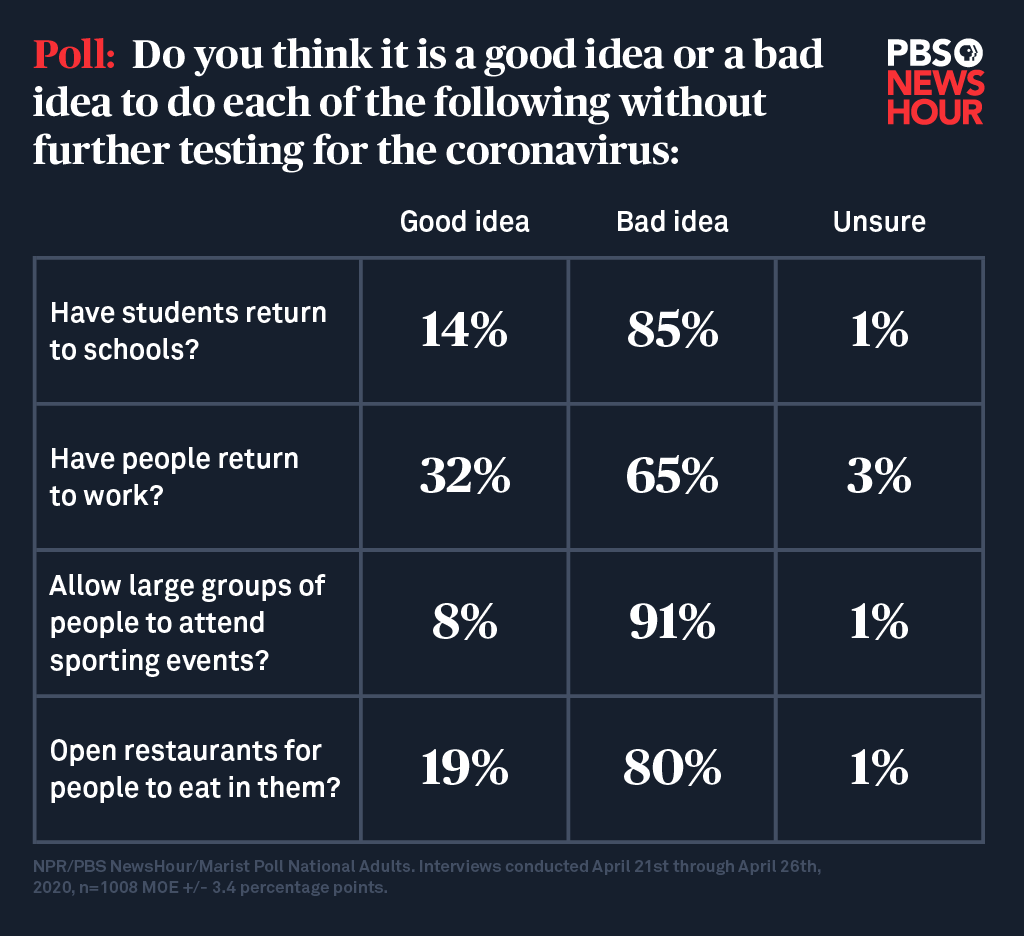 The magnitude and speed of U.S. job loss during the coronavirus pandemic has been stunning, said Katherine Baicker, economist and dean of the Harris School of Public Policy at the University of Chicago. While “real economic hardship has to be weighed as well as the risk to public health,” Baicker said, the nation could safely reopen and revive the economy if it had better testing in place to track the virus’ prevalence. Without adequate testing, a vaccine or medications to treat patients infected with the virus, the country won’t be able to proceed with confidence, Baicker said, and many businesses may not survive long-running economic uncertainty.

“The longer it takes us to get the testing in place that we need, to develop the treatments we need, to ensure we have adequate health care resources in terms of beds and personnel and equipment, the more we risk businesses not being there when it is safe to resume business activity,” Baicker said.

Most Americans said they do not feel safe about sending children back to school, allowing people to dine inside restaurants or allowing large gatherings for sporting events in this latest poll. About two-thirds said testing for the virus needs to improve before allowing people to return to work.

Americans want life to return to normal when it is safe to do so, said Dr. Ashish Jha, a physician and professor at the Harvard T.H. Chan School of Public Health. Judging from this poll, Jha said, Americans recognize that broader testing is necessary to ensure a safe reopening of the economy, and they don’t think the country is doing enough, despite pressure from Trump to reopen schools and get people back to work.

On Monday, the White House unveiled plans to ramp up testing through partnerships with major retail chains, such as CVS, Walmart and Kroger. That announcement, Jha said, was the White House’s acknowledgement that testing is not yet where it should be. 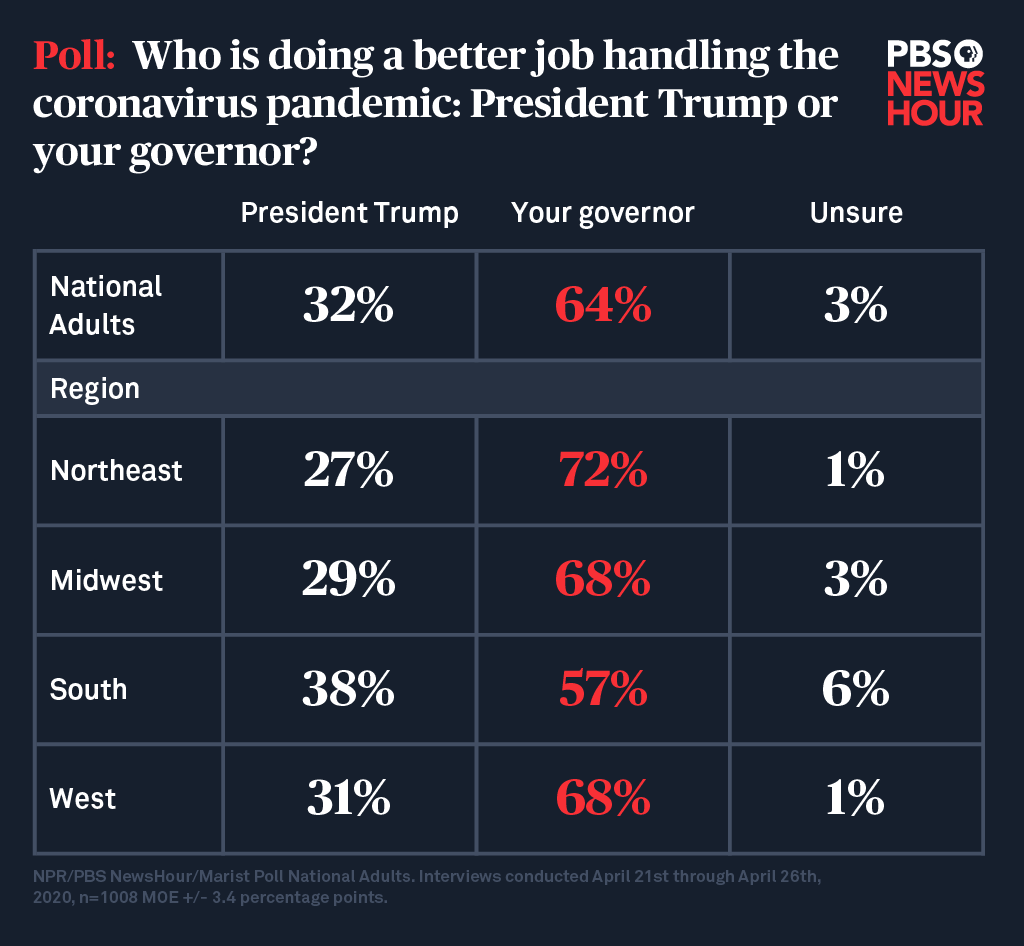 Some states are already choosing to reopen before more testing is in place. On April 17, people returned to some beaches in Jacksonville, Florida. Tattoo parlors and hair salons in Georgia are back up and running, and students may return to Montana schools by May 7. The effects of state decisions whether to reopen or remain closed will not result in “a big spike in cases” for another two to three weeks, Jha said. “It’s just the nature of the virus.”

The virus appears in some ways to have further intensified political division nationwide, said Dr. Harvey Fineberg, chair of the National Academy of Medicine’s Standing Committee on Emerging Infectious Diseases and 21st Century Health Threats. Fineberg said he thinks people overall are cautious about returning to normal life “without doing a lot more testing to know where we stand.”

When asked whether they believe Trump or their state’s governor was doing a better job of managing the coronavirus response, 64 percent of U.S. adults said they favored their governor’s handling of the pandemic, while 32 percent said they favored how Trump was handling it. The distance between the approval ratings of governors versus the president narrowed when respondents were asked who handled the economy better, with 54 percent saying they favored their governor and 39 percent favoring Trump.

On Tuesday, Dr. Anthony Fauci, one of the nation’s foremost doctors who has led the U.S. pandemic response as part of the White House’s coronavirus task force, said there is “no doubt” that more people will become infected with COVID-19 as the country begins reopening.

Left: Barry Lennon, Operating Partner of J. Christopher, hangs up signs to to promote dine in service now available in the J. Christopher restaurant on April 27, 2020 in Brookhaven, Georgia.