Do Democrats want a candidate who shares their values or can beat Trump? Voters are split

Democratic voters are evenly split on whether they care more about the 2020 candidates’ policies or whether those candidates beat President Donald Trump, according to a poll from the PBS NewsHour, NPR and Marist.

Forty-seven percent of Democrats and Democratic-leaning voters said they preferred to have a Democratic nominee in 2020 who shares their positions on most issues. A nearly identical number, 46 percent, said it they thought it was better for the party to nominate a candidate who has the best chance of beating President Donald Trump.

With a field of more than 20 candidates, the question of electability has dominated the early stages of the race for the 2020 Democratic nomination.

Candidates with higher name recognition, like former Vice President Joe Biden, are leading the polls, and early polling shows Biden would also have the biggest advantage in a head-to-head matchup with Trump. Biden has focused his campaign on appealing to the middle class, a group that helped spur Trump to victory in 2016.

But data from the last three decades of presidential elections shows the odds are almost always against candidates who have already run for president — like Biden and Vermont Sen. Bernie Sanders. And other candidates are challenging the idea that the characteristics that once guaranteed a good shot at the Oval Office can still appeal to a Democratic base that is becoming more progressive and diverse. y.

“Somebody could make the claim that perhaps it should be a Joe Biden candidate. But there are also diverse candidates in the race who say they are well positioned,” said Andra Gillespie, a professor of political science at Emory College.

Sen. Kamala Harris, D-Calif., made that point last month in a speech at the NAACP Freedom Fund Dinner. Harris argued that voters in the Midwest are not a monolithic group that only one type of candidate can appeal to. Female candidates have also pointed to their election records. Harris, Sen. Kirsten Gillibrand, D-N.Y., Sen. Amy Klobuchar, D-Minn., and Sen. Elizabeth Warren, D-Mass. have never lost an election.

Independent pollster Floyd Ciruli said the candidates are under pressure to identify with voters on the issues and come across as electable.

“You have to blend them both,” he said.

84 percent of Democrats and Democratic-leaning independents have not made up their mind about which candidate to support.

Early polling also shows how wide open the primary race is. Eighty-four percent of Democrats and Democratic-leaning independents have not made up their mind about which candidate to support in 2020, according to the PBS NewsHour-NPR-Marist poll.

Views on Trump are also changing. Fifty-one percent of national registered voters said they definitely plan to vote against Trump in 2020. That represents a sizable hurdle for the president, but it is less than the 57 percent who said they would vote against him in January.

About 41 percent of voters approve of the job Trump is doing as president, a number that has been consistent in the last several months, according to Marist data. It’s remained steady despite several recent controversies, including the ongoing trade disputes with China and Mexico. His disapproval rating remains high at 49 percent, but is down from 55 percent in February, and more people — one in 10 voters — are unsure of how they feel about the president’s performance, the highest level of uncertainty since last summer.

“That reinforces the fact that during this incredibly tumultuous period, there is no huge bump up in strong disapproval” of Trump, Ciruli said.

One of the key issues around Trump’s presidency is whether he attempted to obstruct justice during the course of special counsel Robert Mueller’s investigation into Russian interference in the 2016 election. Mueller did not reach a conclusion on whether the president obstructed justice; his report lays out evidence on either side of the question. But in a news conference last month, Mueller said “if we had had confidence that the president clearly did not commit a crime, we would have said so.” 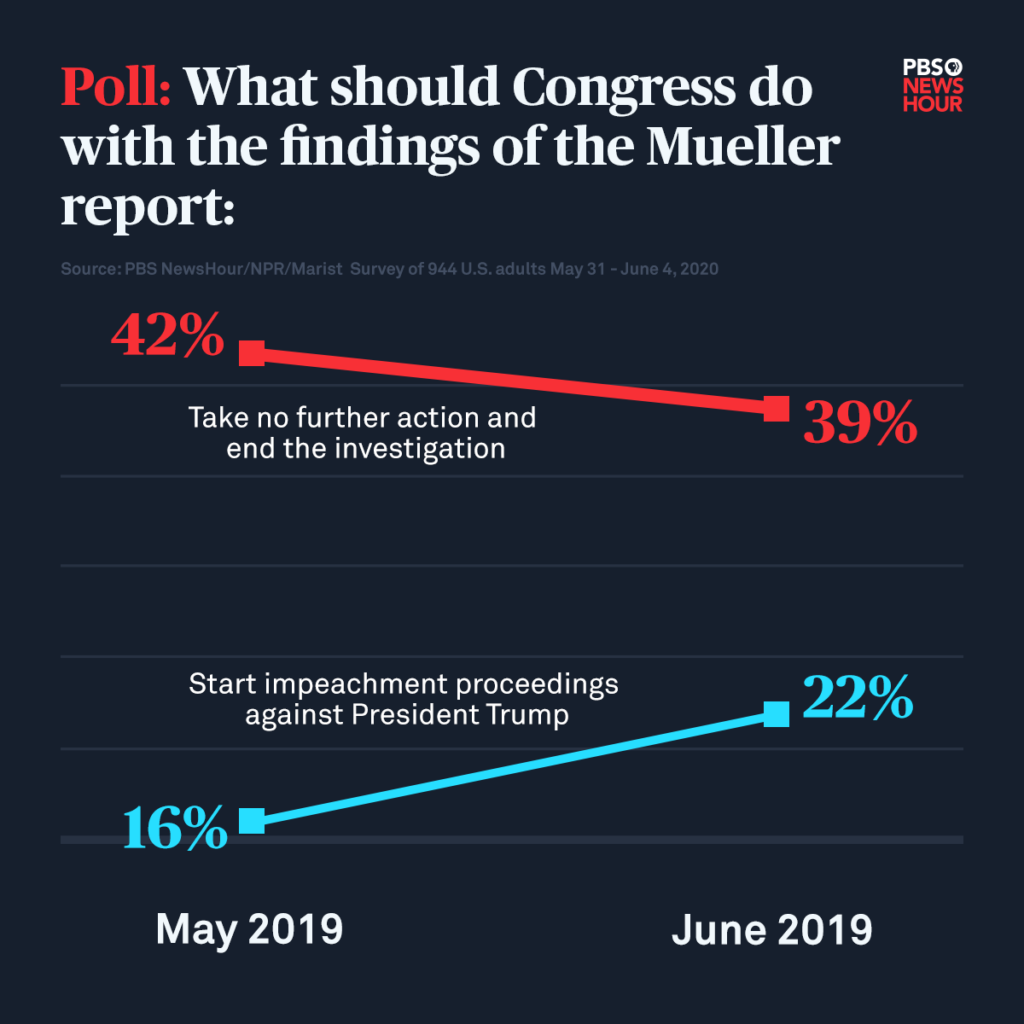 That shift mirrors the discussion happening within the Democratic Party. After Mueller spoke publicly last month, more Democratic lawmakers have called for Trump’s impeachment. House Speaker Nancy Pelosi has not endorsed that idea and has warned against moving too quickly for fear of sparking a backlash in the 2020 elections.