WASHINGTON — The Trump administration and Congress are nearing an agreement as early as Sunday on an aid package of up to $450 billion to boost a small-business loan program that has run out of money and add funds for hospitals and COVID-19 testing.

With small-business owners reeling during a coronavirus outbreak that has shuttered much economic activity, Treasury Secretary Steven Mnuchin said he was hopeful of a deal that could pass Congress quickly and get the Small Business Administration program back up by midweek.

“I think we’re very close to a deal today. I’m hopeful that we can get that done,” he said.

Senate Minority Leader Chuck Schumer, D-N.Y., said he believed a deal could be reached late Sunday or early Monday. “We still have a few more details to deal with,” he said.

Under the proposed deal, the government’s Paycheck Protection Program for small businesses would get roughly $300 billion, according to Mnuchin. The program has been swamped by businesses applying for loans and reached its appropriations limit last Thursday after approving nearly 1.7 million loans. That left thousands of small businesses in limbo as they sought help. An additional $50 billion in the evolving deal would go for disaster loans.

About $75 billion would go to U.S. hospitals, for those straining under a ballooning coronavirus caseload as well as those struggling to stay financially afloat after suspending elective surgeries during the pandemic. About $25 billion would be added for COVID-19 testing, something states have said was urgently needed. The money for hospitals and testing were priorities sought by congressional Democrats.

But additional aid to state and local governments would be left out, Mnuchin said. Democrats have been keen to boost funding to cash-strapped states and local governments whose revenues have cratered, but the issue threatened to provoke fights between large, high-tax states like California and New York and smaller states more typically run by Republicans.

“The president is willing to consider that in the next bill, but wants to get this over the finish line with a focus on small businesses, hospitals and testing,” Mnuchin said. 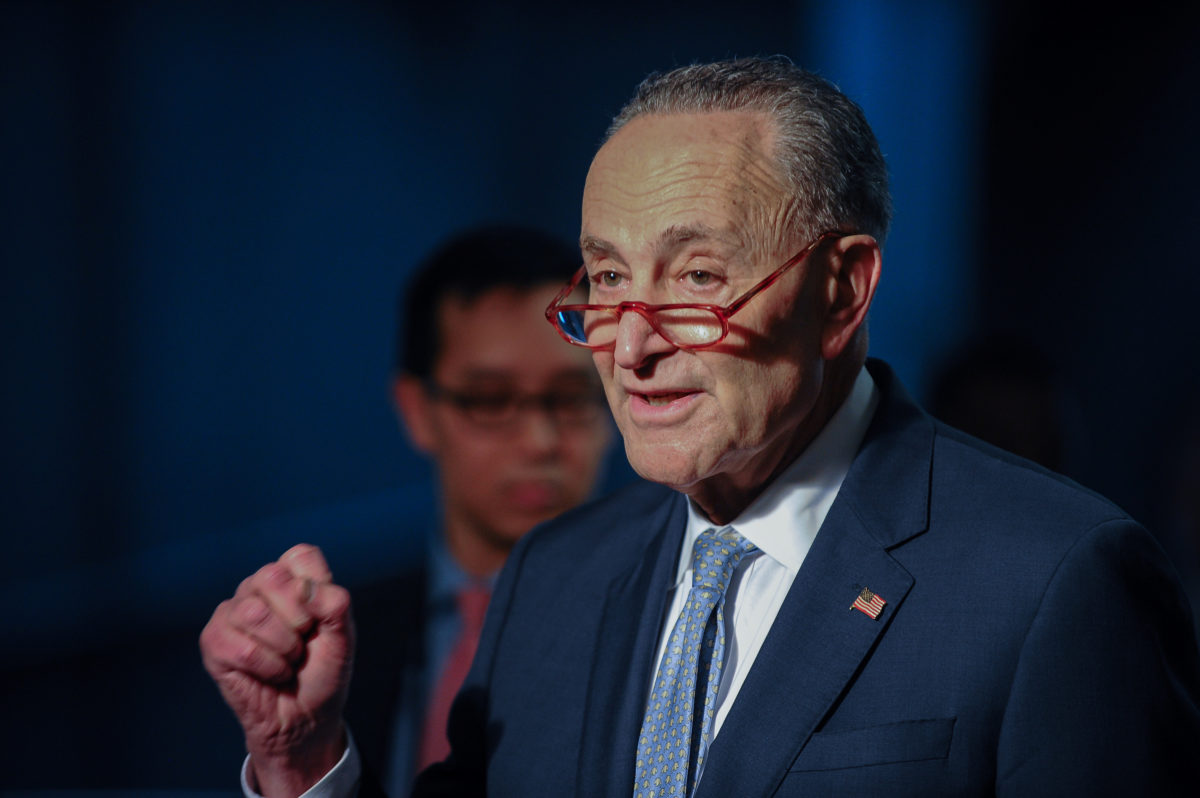 He said he’s been in touch with GOP leaders including Senate Majority Leader Mitch McConnell, R-Ky., and House Minority Leader Kevin McCarthy, R-Calif., and all are “on board with the same plan.”

“I’m hopeful that we can reach an agreement, that the Senate can pass this tomorrow, and that the House can take it up on Tuesday, and, Wednesday, we’d be back up and running,” Mnuchin said.

Schumer said Democrats were still working to get aid for state and local governments. They had submitted a compromise offer Friday that would provide $150 billion for states as well as cities, counties and towns based on need. ‪Key swing states for Trump in the November presidential election — Pennsylvania, Michigan, Ohio and Wisconsin — would receive billions in new aid under the proposal, according to a senior Democratic aide who spoke on condition of anonymity to discuss details of private negotiations.

“We are pushing hard,” Schumer said. “We don’t want our police, our firefighters, our EMTs, our bus drivers — this is not an abstract issue. We don’t want them fired.”

“I am pleased to report that we have been engaged in bipartisan negotiations on our interim legislation, and our progress is encouraging,” she said in a letter late Saturday to Democratic colleagues.

Republican Maryland Gov. Larry Hogan, who leads the National Governors’ Association, said he and other governors believe that aid for state and local government is “desperately needed,” but that it may not be an issue worth fighting over for now.

“I don’t think the deal is finalized yet,” he said. “But, look, we do not want to hold up funding to these small businesses. And we hope that the Democrats and the Republicans in the Senate can come together in a bipartisan way and get something moving for the American people.”

The SBA loans, based on a company’s payroll costs, offer owners forgiveness if they retain workers or rehire those who have been laid off. The law provides for forgiveness for companies in any industry — even businesses like hedge funds and law firms. There’s a limit of $100,000 on the amount of employees’ compensation that can be considered when loan forgiveness is calculated.

While they wait, owners who are shut down or who’ve lost revenue have expressed unease about the longer-term impact the virus outbreak will have on their companies.

“There’s great pain out there,” said Suzanne Clark, president of the U.S. Chamber of Commerce. “Every hour and day that goes by without this assistance is really hurting them.”

Mnuchin, Schumer and Hogan appeared on CNN’s “State of the Union,” and Clark spoke on CBS’ “Face the Nation.”