ALEXANDRIA, Va. (AP) — An FBI agent who participated in the raid last year on Paul Manafort’s Virginia condo testified on the second day of the trial for the former Trump campaign chairman.

Special Agent Matthew Mikuska told jurors on Wednesday that the FBI knocked multiple times on the door of Manafort’s condo before entering with a key after no one answered. He says agents spotted Manafort inside after they entered.

Manafort is accused of orchestrating a multimillion-dollar conspiracy to evade U.S. tax and banking laws

A prosecutor showed Mikuska and the jury a series of invoices, including for home improvement work, that were seized by the FBI during the August 2017 raid.

The judge in Manafort’s trial told prosecutors not to use the word “oligarch” to describe wealthy Ukrainians who paid millions to the former Trump campaign chairman.

Manafort is accused of orchestrating a multimillion-dollar conspiracy to evade U.S. tax and banking laws. His defense attorneys say he isn’t to blame because he left the details of his finances to others.

U.S. District Judge T.S. Ellis III told attorneys for special counsel Robert Mueller that the term “oligarchs” has a pejorative meaning and using it is not relevant to the fraud and tax charges against Manafort.

He cautioned them that the term could imply that Manafort was associating with “despicable people and therefore he’s despicable.”

“That’s not the American way,” the judge added.

The proceedings, which could last weeks, kept the attention of President Donald Trump who defended his 2016 hiring of Manafort.

“Why didn’t government tell me that he was under investigation,” Trump tweeted Wednesday. “These old charges have nothing to do with Collusion – a Hoax!”

Paul Manafort worked for Ronald Reagan, Bob Dole and many other highly prominent and respected political leaders. He worked for me for a very short time. Why didn’t government tell me that he was under investigation. These old charges have nothing to do with Collusion – a Hoax!

Prosecutor Uzo Asonye told the jury during his opening statement Tuesday that Manafort considered himself above the law as he funneled tens of millions of dollars through offshore accounts. That “secret income” was used to pay for personal expenses such as a $21,000 watch, a $15,000 jacket made of ostrich and more than $6 million worth of real estate paid for in cash, Asonye said.

“A man in this courtroom believed the law did not apply to him — not tax law, not banking law,” Asonye said as he sketched out the evidence gathered by special counsel Robert Mueller’s team in Manafort’s bank fraud and tax evasion trial.

WATCH: What we learned from Paul Manafort trial opening statements

Manafort’s trial is the first arising from Mueller’s investigation into potential ties between Donald Trump’s presidential campaign and Russia. It opened with extraordinary anticipation amid unresolved questions about whether Trump associates coordinated with the Kremlin to tip the election in the president’s favor.

“A man in this courtroom believed the law did not apply to him — not tax law, not banking law”

But it was clear from the outset that the case would not address that question: Prosecutors did not once reference Manafort’s work for the Trump campaign nor mention Mueller’s broader and ongoing investigation into Russian election interference. Mueller was not present in the courtroom.

Manafort, the lone American charged by Mueller who has opted to stand trial instead of cooperate with prosecutors, was described by his defense lawyer as a hugely successful international political consultant who left the details of his finances to others.

READ MORE: Prosecutors say Paul Manafort believed he was above the law. Manafort said associates failed to keep track of his income

He relied on a team of financial experts to keep track of the millions of dollars he earned from his Ukrainian political work and to ensure that that money was being properly reported, said attorney Thomas Zehnle. He especially trusted business associate Rick Gates, who pleaded guilty in Mueller’s investigation and is now the government’s star witness. But that trust was misplaced, Zehnle said in an opening statement that made clear that undermining the credibility of Gates — a former Trump campaign aide who spent years working for Manafort in Ukraine — is central to the defense strategy.

Zehnle warned jurors that Gates could not be trusted and was the type of witness who would say anything he could to save himself from a lengthy prison sentence and a crippling financial penalty.

The trial, decided by a jury of six men and six women who were seated after a brief selection process Tuesday, is expected to last several weeks.

After opening statements, the jury heard from the government’s first witness, Democratic strategist Tad Devine, who testified about his collaborations with Manafort on behalf of Ukrainian presidential candidate Viktor Yanukovych and his Party of Regions. Devine testified that Manafort ran a tightly disciplined, professional campaign that contributed to his candidate’s victory. 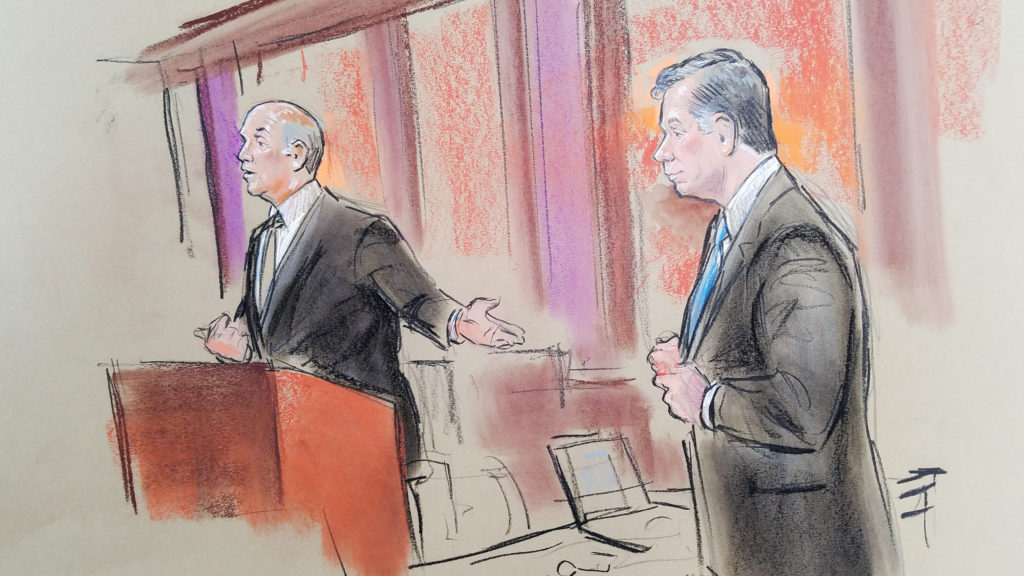 Central to the government’s case are allegations that Manafort funneled more than $60 million in proceeds from his Ukrainian political consulting through offshore accounts, including in Cyprus, and hid a “significant” portion of it from the IRS. He created “bogus” loans, falsified documents and lied to his tax preparer and bookkeeper to conceal the money, which he obtained from Ukrainian oligarchs through a series of shell company transfers and later from fraudulently obtained bank loans in the U.S., prosecutors said.

But Zehnle said there was no evidence that Manafort ever intended to deceive the IRS. He denied allegations that Manafort had tried to conceal his earnings by storing money in bank accounts in Cyprus, saying that arrangement was not of Manafort’s doing but was instead the preferred method of payment of the supporters of the pro-Russia Ukrainian political party who were paying his consulting fees.

Defense lawyers also sought to address head-on Manafort’s wealth and the images of a gaudy lifestyle that jurors are expected to see.

“Paul Manafort travels in circles that most people will never know and he’s gotten handsomely rewarded for it,” Zehnle said. “We do not dispute that.”

Manafort has a second trial scheduled for September in the District of Columbia. It involves allegations that he acted as an unregistered foreign agent for Ukrainian interests and made false statements to the U.S. government.

The other 31 people charged by Mueller so far have either pleaded guilty or are Russians seen as unlikely to enter an American courtroom. Three Russian companies have also been charged.

Left: Former Trump campaign manager Paul Manafort is shown in a court room sketch, as he sits in federal court on the opening day of his trial on bank and tax fraud charges stemming from Special Counsel Robert Mueller's investigation into Russian meddling in the 2016 U.S. presidential election, in Alexandria, Virginia, U.S. July 31, 2018. Drawing by Bill Hennessy/Reuters