Fight of the Night: Happy Warrior vs. Likable Wonk 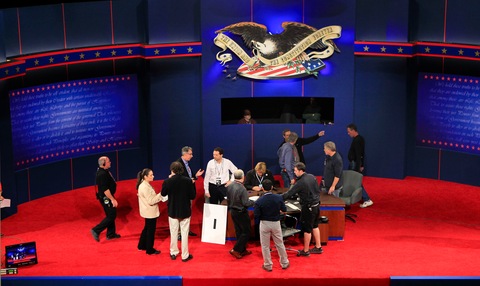 Pop that popcorn. It’s literally going to be a must-watch evening.

Thursday night’s vice presidential debate at Centre College in Danville, Ky., may not change many minds, but we can all agree it’s likely to be an entertaining forum.

While Vice President Biden, described as a “happy warrior” during his debate prep, has done this before, Wisconsin Rep. Paul Ryan will stand on the most prominent stage of his political career.

Will there be gaffes? Laughs? Moments that can shift the direction of the Nov. 6 contest? The NewsHour will be there for every moment. Join us online Thursday afternoon for a robust live stream and live blog, for the NewsHour at 6 p.m. ET and the PBS debate special at 9 p.m. ET with co-anchors Gwen Ifill and Judy Woodruff and analysis from Mark Shields and David Brooks.

Stakes in the Biden-Ryan matchup are high, and the stage has been set after the lopsided result from last week’s presidential debate in Denver, during which President Obama underwhelmed viewers with what he now calls being “too polite” and MItt Romney jolted energy into his personality and campaign.

This time, Biden is the de facto underdog who must “play hardball” and press Ryan on policy, former Michigan Gov. Jennifer Granholm, who played Sarah Palin in Biden’s debate prep four years ago, told the Associated Press. Ryan said he expects the same from the vice president as well.

The Pew Research Center has taken stock of voters’ expectations for the running mates. The numbers pose more of a challenge for Biden, who garnered a favorable rating of 39 percent from voters, down 14 points from his standing heading into his debate with Palin in October 2008. Fifty-one percent of voters view him unfavorably. The survey found 44 percent of voters view Ryan favorably and 40 percent unfavorably.

Biden also must fight expectations as he attempts to avoid his storied propensity for flowery language, mistakes and exaggerating his case.

He’ll likely press Ryan on specifics of policy, especially on Ryan’s Republican budget proposal that Democrats see as a winning issue to fight against. Ryan, in turn, must hold his ground and press the vice president on the Obama administration’s record.

USA Today noted that while the vice presidential debates carry little significance in the presidential race overall, they often produce the most memorable moments — from “Senator, you’re no Jack Kennedy” to “Can I call you Joe?”

Team Obama’s Stephanie Cutter lays out her expectations in a terse memo suggesting the campaign does not expect Ryan to be truthful.

A new round of polls out Thursday check the temperature of the presidential race and find it tightening in battleground states.

A Wall Street Journal/NBC News/Marist Poll survey showed Romney made gains among male voters and independents after the first presidential debate, and he’s now in a statistical dead heat with Mr. Obama in Virginia and Florida. Romney holds the edge in Virginia by 1 percent, 48 percent to 47 percent, and the president remained up by 1 percent in Florida, 48 percent to 47 percent.

The president’s lead in Ohio stayed outside the poll’s 3.1 percent margin of error at 51 percent to 45 percent.

The president led, 51 percent to 46 percent, in Virginia and, 50 percent 47 percent, in Wisconsin among likely voters.

Romney leads slightly in Colorado, the poll found, at 48 percent to 47 percent.

Gwen Ifill took a look at swing voters in a swing county in a swing state — specifically, in Colorado’s Jefferson County, where both presidential campaigns have devoted time and money. The county boasts a truly split electorate, with one-third of the voters Democrats, one-third Republicans and one-third no party affiliation.

She found what we’re seeing in so many battleground states: fired up volunteers on both sides, trepidation about the president, undecided voters and Romney supporters who will vote for him but just aren’t that excited about his candidacy.

Watch Gwen’s report here or below, and don’t miss the chili cookoff shots:

Check out a Tumblr collage put together by NewsHour production assistant David Pelcyger of campaign volunteers in Colorado.

NewsHour’s Team Politics is on the road again, with Gwen headed to cover the Massachusetts battle between Sen. Scott Brown and Elizabeth Warren this weekend. Follow them! @burlij, @dePeystah, @mobilemort and @pbsgwen.

What’s the best way for universities to build diverse classrooms?

NewsHour correspondent Ray Suarez hosted a discussion with NAACP Legal Defense Fund acting president Debo Adegbile and Richard Kahlenberg of the Century Foundation on affirmative action. On Wednesday, they closely watched the Supreme Court’s hearing of arguments in Fisher v. University of Texas. A 22-year-old white woman contends the school didn’t admit her because it considers race in its admissions process.

The case is somewhat different than past cases because of a Texas policy to admit all students who graduated in the top 10 percent of his or her class. That race-blind rule had helped the university increase its number of minority students.

But Adegbile found some flaw in a school not using race-based affirmative action and relying only on the 10-percent rule. More diversity is still needed, he said.

“You get some measure of diversity, but you get it because of our history of separating each other,” Adegbile said. “Too many of our high schools are racially identified. There’s lots of residential segregation, which leads to segregation in schools, not by law, but by practice. And the result of this is that too many kids don’t have these interactions until they get to college and are able to learn from each other and break down stereotypes.”

Kahlenberg agreed that diversity in schools is important but disagreed on the method of encouraging it. He instead argues for admissions programs that aid students from poorer backgrounds.

“My concern with the current affirmative action is that, essentially, universities assemble wealthy kids of all colors,” he said. “And we’re not getting that genuine diversity that has to do also with socioeconomic status.”

In effect, affirmative action based on economic status brings together a diverse group of students, he said.

The National Law Journal’s Marcia Coyle also joined senior correspondent Gwen Ifill on Wednesday’s NewsHour to discuss what she heard in the courtroom.

Justices Stephen Breyer, Sonia Sotomayor and Ruth Bader Ginsburg expressed concern that Fisher’s attorney may be asking to overturn the 2003 Supreme Court precedent that upholds affirmative action, Coyle said. The conservatives on the court, including Chief Justice John Roberts, took issue with what the university called “critical mass,” the number of students needed in a class to achieve diversity.

Overall, the eight justices weighing in on the case — many who hadn’t ruled on the issue in 2003 — could split on the decision. Justice Elena Kagan has recused herself on the case because she worked with the Department of Justice on the 2003 case. Justice Anthony Kennedy may play the swing role, Coyle said, though he didn’t reveal his cards Wednesday.

Still, Kennedy “has never found an affirmative action plan that he feels is constitutional, but he holds out hope that there is one out there,” Coyle said.

Watch the explainer and discussion segments here or below:

Wednesday’s tidbit from NewsHour partner Face the Facts USA looks at the number of people dually eligible for both Medicare and Medicaid.

The nonpartisan organization found that 9 million Americans get both benefits simultaneously and “consume a disproportionate share of program resources.”

Paul Ryan better watch out in the debate. Joe Biden’s dad used to be a coal miner in Britain.He’s tough.

How they see us, Le Parisien edition: “Romney the Extraterrestrial” twitter.com/mollyesque/sta…

“OK, we have to make a decision: Is his hair off-limits?” — overheard in Paul Ryan’s prep chamber this AM