Much of Coral Nichols’ life is focused on helping others. She is an apostle with her church in Saint Petersburg, Florida. She is the vice president of a nonprofit that she co-founded called Empowered to Change. Nichols has a bachelor’s degree in psychology, a master’s in marriage and family therapy, and at 41, she’s working on another master’s in divinity.

But Nichols can’t vote — the result of a felony conviction in 2005 for grand theft and fraud.

It’s been nearly a year and a half since Florida voters overwhelmingly approved constitutional Amendment 4 to restore voting rights to former felons — except those convicted of murder or sexual offenses — once they have completed all terms attached to their sentences. Until the 2018 amendment, Florida was one of only four states in the country that permanently barred people with felony records from voting.

The recent change was expected to allow some 1.4 million former felons to vote, yet a law passed in 2019 by the Republican-controlled Florida legislature specified that they must first pay back all restitution to victims, as well as court fines and fees, in order to regain voting eligibility. That means Nichols and thousands of others in the state are still fighting for those rights.

The marrying of wealth and voting comes down to a pretty shameful part of our historical past.

Under Florida’s 2019 law, at least 774,000 former felons (also referred to as returning citizens) are still ineligible to vote in the state due to outstanding debts, according to a report by University of Florida professor Daniel Smith. With limits on available data, Smith stated that his figure was likely an underestimate.

The legislation sparked a massive debate and court battle that is still playing out. A full trial on the issue is set to begin remotely on April 27 amid the novel coronavirus pandemic. Legal teams hope to get a resolution by Election Day in November.

In October, a federal judge issued a preliminary injunction against the 2019 law, arguing that the state cannot deny former felons the right to vote because of their inability to pay. Many initially thought that decision, which was upheld by a federal appeals court in February, only applied to the 17 returning citizens who sued, citing that their inability to pay their fees and fines prevented them from regaining their voting rights.

However on Tuesday, the judge said that his decision in the April trial would include all felons in the state of Florida, significantly raising the stakes for the upcoming trial.

Proponents of the controversial 2019 law say that fines, fees and restitution are part of a former inmates’ sentence and must be paid before the sentence can be considered complete.

“I think the sad part is that there’s become sides on this. The only side I’m on is truth,” said James Grant, a Republican Florida state representative who championed the bill. “I personally believe in restoration and redemption, but I also believe in fidelity to our Constitution.”

The legal teams opposing the law say it discriminates against former inmates who are unable to pay off their legal financial obligations. “Folks who are trying to get back on their feet in the result of a criminal conviction have a lot of barriers,” says Myrna Pérez, director of the Voting Rights and Elections program at the Brennan Center for Justice. “Our Constitution is premised on the idea that wealth is not a condition of voting … The marrying of wealth and voting comes down to a pretty shameful part of our historical past.”

Poll taxes — fees required to register to vote — that disproportionately impacted African American voters, were required in various states beginning in the 1890s until they were ruled unconstitutional in the 1960s. 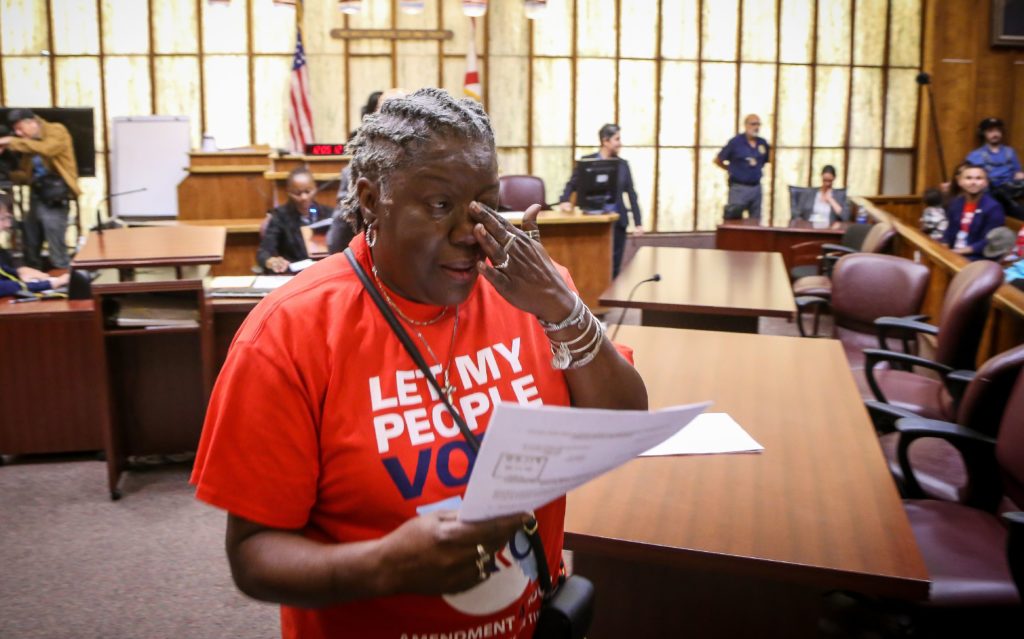 Carmen Brown weeps as she walks away holding a paper restoring her right to vote during a special court hearing aimed at restoring the right to vote under Florida’s amendment 4 in a Miami-Dade County courtroom on November 8, 2019, in Miami, Florida. Photo by ZAK BENNETT/AFP via Getty Images.

In his report, Smith found that in Brevard County, more than half of the 15,000 residents with felony convictions that he tracked owed more than $500 and that costlier fees and fines, which are often prohibitive, also appear to affect African Americans at higher rates. Ultimately, fees, fines and restitution can add up to tens of thousands of dollars. Nichols, for example, still currently owes about $180,000.

Another barrier is raised by Florida’s lack of a centralized, statewide database to track exactly how much people owe. Counties and clerks of court offices may use different methods of logging information. Missing data and errors in the recorded information can present challenges for former inmates looking to determine their voting eligibility, Smith notes in his report.

“Returning citizens, trying to be on the right side of this law, are going to their local clerk and going to their local supervisor of elections to determine their eligibility,” said Julie Ebenstein, a senior staff attorney with the ACLU, one of the groups involved in the ongoing lawsuit against the Florida law. “The fact that the state hasn’t put out reliable information on what the requirements are, and how to meet them, is a huge shortcoming.”

The state argues that individuals with felony records have options available to help reduce their financial obligations, including petitioning the courts to convert their costs to community service hours, seeking clemency, or asking collections companies to excuse their debt. However, these processes can vary greatly depending on a former inmates’ county of residence, as well as the financial or legal resources available to them.

Ebenstein says a crucial first step for former inmates being able to waive their financial obligations is for them to demonstrate to a court that they cannot pay. The state currently does not have a system in place to help returning citizens with this.

“Assuming the state continues to take no action this month, and if we are successful at trial, we expect the court will dictate a process for people to show their inability to pay,” Ebenstein said.

In the meantime, local groups like the Florida Rights Restoration Project are raising funds to help returning citizens pay the costs associated with their sentences, depending on their needs.

MORE: In Florida, path to restoring felons’ voting rights has been fraught with challenge

It’s unclear the political impact of fully restoring voting rights to criminal offenders. But, at a minimum, it would allow at least a million voters to exercise their right ahead of the presidential election. Florida is a swing state that President Donald Trump won by nearly 113,000 votes and 1.2 percentage points in 2016. Former President Barack Obama won the state in 2008 by 2.5 percentage points, gaining about 200,000 more votes than the late U.S. Sen. John McCain. The 2020 election could also shape up to be a close call in Florida as Trump seeks to win reelection after a tumultuous first term.

But political participation among former felons is generally low, said Marc Meredith, an associate professor with the University of Pennsylvania who researches voting rights and engagement among returning citizens around the country.

In his research, Meredith said he hasn’t found an election with more than 20 percent participation from former felons. This is compared with 55.7 percent voter turnout for the 2016 presidential election, and about 60 percent in 2008. Lower participation from former felons can stem from a variety of factors, including a lack of knowledge about the process or candidates, or uncertainty about whether they are eligible.

Moreover, returning citizens in Florida have mixed political leanings, Meredith said. Nichols is a registered Republican who supports positions from both major parties. The Florida Secretary of State’s office said in an email that it does not track specific voter registration data for those who had voting rights restored.

Researchers, activists and legal advocates alike seem to agree that political motivations should not be the factor, but rather giving a voice to all eligible individuals is what is important.

“[Society] will treat people like trash to be discarded on the side of the road without knowing anything about their lives and why they made the decision they made,” Nichols said. “People are a valuable commodity and they have insight, value and worth simply because they are a living breathing person.”

Left: A voting booth is seen during the Democratic presidential primary election at a polling center in Miami, Florida, U.S. March 17, 2020. REUTERS/Marco Bello