Republicans and Democrats disagreed on aspects of the $2 trillion coronavirus relief bill, but they set their broader differences aside and largely avoided partisan attacks in responding to a crisis that has killed more than 1,000 people in the U.S. and brought parts of the economy to a virtual standstill.

President Donald Trump has seemingly tried to assign blame at times for the virus, but has also described the pandemic as an “invisible enemy,” an acknowledgment that there’s no clear scapegoat for a crisis unlike any he’s dealt with since taking office and in recent U.S. history.

As leaders from both parties scramble to respond, it’s become apparent the crisis has upended the normal rules of partisan warfare in Washington. With no real culprit to point to, Republicans and Democrats have found themselves in the unfamiliar position of confronting a crisis that does not fall along partisan lines.

READ MORE: What the $2 trillion coronavirus relief bill means for you

“There’s not an obvious sort of boogeyman here,” said Matt Mackowiak, a Republican strategist. “There aren’t talking points or bumper sticker-type messaging that either party can offer.”

After the terrorist attacks of Sept. 11, 2001, “there was an identifiable source to blame: Osama Bin Laden and Al Qaeda,” said Robert Shapiro, a political science professor at Columbia University. When the housing market crashed seven years later and sparked the Great Recession, Congress had a ready villain in Wall Street and the big banks, Shapiro said. “This is different.”

Congressional leaders tried to avoid a political fight in negotiating the latest coronavirus bill, even as tensions ran high in recent days during talks between Democrats and the White House, led by Treasury Secretary Steven Mnuchin.

Democrats pushed for changes in the legislation to require more government oversight of $500 billion in aid to struggling companies. They argued that early drafts of the bill were more focused on bailing out businesses than helping workers hurt by the coronavirus.

Republicans and the White House accused Democrats of trying to push through environmental regulations and other provisions that were not directly related to public health and the economic impacts of the pandemic.

But despite their differences, they still reached a deal as quickly as possible.

The Senate passed the $2.2 trillion bill Wednesday night in a unanimous vote and the House is expected to approve the measure Friday — an unusually fast timeline for a massive piece of legislation that would normally take weeks if not months to move through Congress.

The coronavirus response package is more than twice as large as the stimulus bill Congress passed in 2009 to boost the economy during the Great Recession.

“In effect, this is a wartime level of investment into our nation,” Senate Majority Leader Mitch McConnell, R-Ky., said in remarks on the Senate floor Tuesday, announcing the agreement. The comment echoed Trump’s claim last week during a press conference on the coronavirus, where he characterized himself as a “wartime president.” 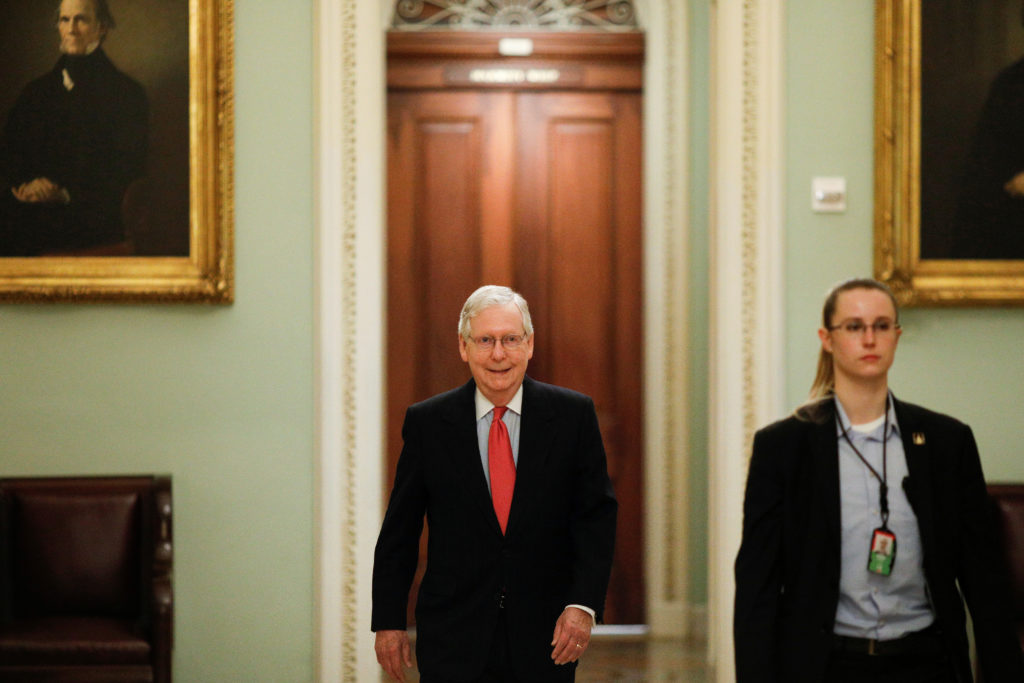 But the wartime parallels are imperfect. When the United States was attacked at Pearl Harbor, or on 9/11, political leaders were able to rally the public around defeating an easily recognizable enemy.

A more accurate comparison to the novel coronavirus pandemic is an incident like the deadly polio outbreak under President Harry Truman in the late 1940s, said Barbara Perry, the director of presidential studies at the University of Virginia’s Miller Center.

“Localities would shut down their pools and theaters and people would social isolate in the summertime, when it seemed to spread. Nobody pointed to a person or a country. That’s just the way it was,” Perry said.

A half-century later, after advances in modern science and medicine, “people in our day and age want to have control over everything. It’s really hard when there’s a natural disaster or illness for people to accept [that there isn’t a straightforward solution],” she said. “People want to know who the enemy is and fight it.”

While congressional leaders have largely avoided partisan attacks over the coronavirus, Trump has vacillated between showing restraint and lashing out against Democrats — including former Vice President Joe Biden, the front-runner for the Democratic presidential nomination.

By repeatedly describing the novel coronavirus as the “Chinese virus,” Trump has also made a point to lay blame, if indirectly, with China — where cases were first reported — for causing the global health crisis. Trump has also argued that previous U.S. administrations did not adequately prepare for pandemics like the coronavirus, a critique that shifts criticism of the administration’s slow response on to his predecessors.

“We’ve come a long way from the broken, obsolete system that I inherited,” he said Wednesday at a White House briefing on the coronavirus.

Critics have argued that Trump’s slow response to the pandemic at the start of the year — and initial dismissal of the virus as a serious threat — cost valuable time the administration could have used to help flatten the curve of the virus in the U.S. Trump has faced criticism for contradicting his top science and health care advisers, providing inaccurate information on potential treatments for COVID-19, and referring to the pandemic as the “Chinese virus,” a description widely viewed as xenophobic that has coincided with the rise of discrimination against Asian Americans.

The president has also expressed a desire to get people back to work and restart the economy faster than experts say would be safe. He suggested that ideally, the U.S. would start returning to normal by Easter, on April 12.

Despite the criticism, Trump’s message appears to be resonating with supporters. Cindy Costa, a member of the Republican National Committee from South Carolina, said there’s no need for politicians to avoid assigning blame for the crisis when it’s clear China is at fault.

“Didn’t this start in China? I mean, I think there is a villain we can point out,” Costa said in a phone interview, adding that Chinese-Americans in the U.S. should not be held responsible for China’s failure to contain the virus from spreading around the world.

Costa praised Trump’s decision in January to restrict visitors from China to the U.S. Since then, the Trump administration has imposed travel restrictions on visitors from Europe, and also closed the U.S. borders with Mexico and Canada to non-essential travel. 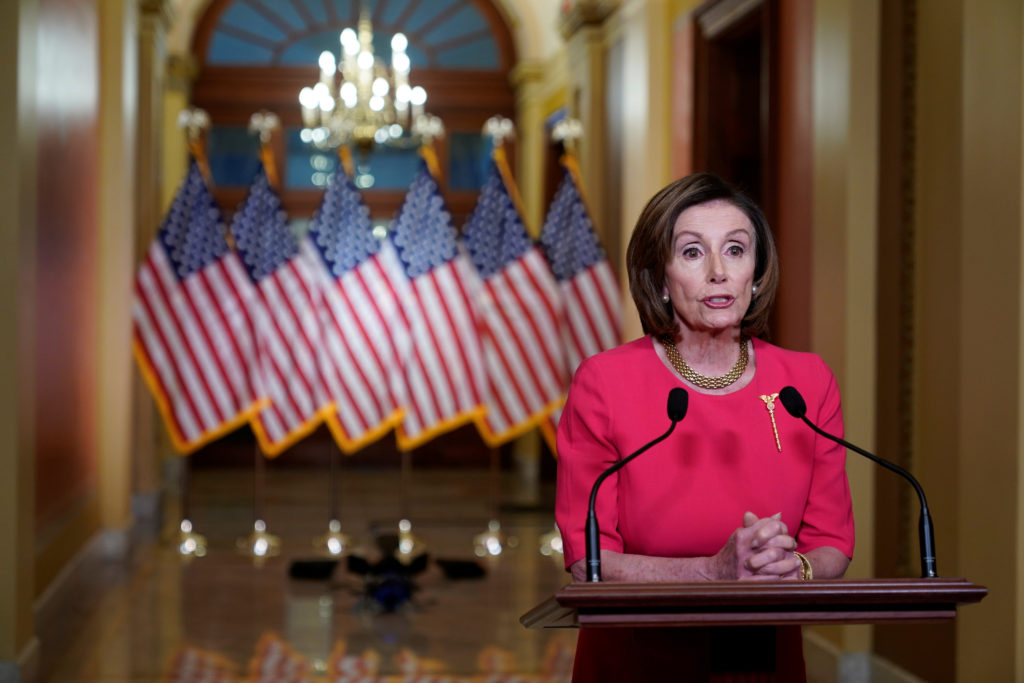 Trump’s approval rating has gone up in recent weeks as the administration ramped up its efforts to curtail the pandemic.

Earlier this month, the White House called for a 15-day nationwide ban on gatherings of 10 or more people. Trump also invoked the Defense Production Act to push private companies to produce masks, ventilators and other much-needed medical equipment. The White House has also worked with private sector labs to boost testing nationwide as the number of infections has climbed into the tens of thousands.

Trump’s overall job approval rating hit 49 percent in a new Gallup poll released earlier this week, up from 44 percent in mid-January. The poll found 60 percent of Americans approved of Trump’s handling of the coronavirus crisis. A PBS NewsHour/NPR/Marist poll this month found that nearly half of Americans think Trump is mishandling the pandemic.

Still, Trump’s popularity pales in comparison to the support past presidents received in moments of crisis. “We always look to presidents for guidance in these times,” said Shirley Ann Warshaw, a presidential scholar at Gettysburg College. “Trump’s approval rating has gone up around 50 percent, so people are looking to him. But it should be [closer to] 80 percent. Look at George Bush after 9/11.”

Bush’s approval rating topped 80 percent in the immediate aftermath of the terrorist attacks. More than 60 percent of Americans approved of Barack Obama’s job performance in his first months in office, as he navigated the biggest economic downturn since the Great Depression.

Critics said the coronavirus has underscored Trump’s inability, or unwillingness, to put politics aside when responding to a crisis that has stoked widespread fear and confusion.

“Trump has a constant need to stoke his base,” said Tad Devine, a Democratic strategist. The White House daily press briefings on the coronavirus response “seem to have taken the place of his rallies. He doesn’t know how to stop the politics. He’s not capable.”

In the past, “presidents like Truman have been successful when they’ve said, ‘Let’s fight this natural disaster or epidemic, and make that the enemy, and haven’t tried blaming someone or some country for it,” said Perry, of the University of Virginia.

Trump has already shown impatience with following that approach. The longer the coronavirus crisis continues, Perry added, the harder it will be for the president — or members of Congress — to avoid falling back into their partisan camps.

“You would think that a pandemic around the world would cause people to say, ‘Let’s join together.’ And I do think you see that at the local and state level,” Perry said. “But what we’ve also seen is the tendency for people to run to their [political] corners. And you have a president who, let’s face it, is not the best at unifying people.”

Left: As President Donald Trump and leaders from both parties respond to the coronavirus, it’s become apparent the crisis has upended the normal rules of partisan warfare in Washington. REUTERS/Jonathan Ernst