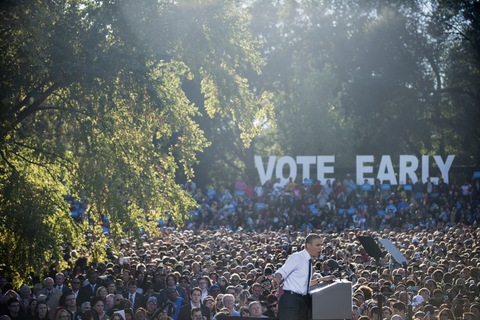 With each passing day since last week’s presidential debate in Denver, there are growing signs that the race between President Obama and Mitt Romney has tightened.

The latest batch of evidence came Tuesday in the form of two battleground state polls out of Ohio and New Hampshire.

In the Buckeye State, Mr. Obama now leads Romney, 51 percent to 47 percent, among likely voters, according to a new CNN/ORC International poll. A handful of non-partisan, person-to-person phone surveys of likely Ohio voters conducted before the first debate had the president up between seven and 10 percentage points.

To underscore the importance of Ohio’s 18 electoral votes, both nominees rallied supporters there on Tuesday.

The president, meanwhile, addressed some 15,000 supporters at Ohio State University in Columbus, where he urged them to make sure they registered to vote before Tuesday’s deadline.

“I need you fired up. I need you ready to go to vote. Because we’ve got some work to do. We’ve got an election to win. Everything that we fought for in 2008 is on the line in 2012. And I need your help to finish what we started,” Mr. Obama said.

In another reminder of the high stakes in Ohio, political operatives sparred Tuesday over an appeals court ruling that would have expanded early voting beyond members of the military. Republican Secretary of State Jon Husted asked the Supreme Court to overturn the ruling that found all voters should be allowed to cast ballots the weekend before the election, saying that Ohio officials should be able to make calls county-by-county.

From the Washington Post’s Robert Barnes, who points out in the story that the Saturday in question is just 25 days away:

In past elections, it has been up to individual Ohio counties whether to offer voting on the weekend before the election. The state’s Republican leadership changed that this year, saying that only military members should be allowed to vote then.

Ohio officials said that local election boards needed the weekend to prepare for Election Day, but that military voters deserve special treatment because they can be deployed at any time.

The appeals court, however, said that local jurisdictions do not have to offer voting on the weekend, but that if they do, it must be open to all.

The other battleground poll released Tuesday that revealed a narrowing race came from New Hampshire, where a WMUR poll found 47 percent of likely voters in the Granite State said they backed the president, while 41 percent prefered Romney. That marked a shift from the 52 percent to 37 percent advantage the president enjoyed in the survey just eight days ago.

The NewsHour did a short piece Tuesday on the increasing urgency with four weeks to go. Watch that here or below:

What do we know about how Mr. Obama and Romney think, make decisions and rebound from their mistakes?

PBS’ “Frontline” confronted that question head-on in this year’s installment of “The Choice,” which takes a look every four years at the personal histories of the two people running for president. It debuted Tuesday night and will be rebroadcast this month. The “Frontline” political team examined how critical moments in Mr. Obama’s and Romney’s early adulthoods and young political careers shaped their approaches to governing.

Part of the two-hour program was devoted to both men’s successes and failures in working with politicians on the other side of the aisle: the president with congressional Republicans, and Romney with Democratic state legislators in Massachusetts. The program also took a long look at health care reform and how both men scored significant legislative achievements on the issue.

The “Frontline” team highlighted the more noteworthy documents and materials it came across during its research: a poem Mr. Obama wrote when he was a sophomore at Occidental College and a photo of Romney participating in a Vietnam War counter-protest while he was a Stanford freshman.

Some of these “Artifacts of Character” clips also shed light into some of the men’s failures as political neophytes. Archival footage shows Mr. Obama receiving sharp words during a 2000 debate from Rep. Bobby Rush, the Democrat he was trying to unseat in an Illinois primary. On the campaign trail, Rush cast Obama as an inexperienced candidate with a less-than-sturdy connection with the congressional district’s black community, and Obama went on to lose the primary by a two-to-one margin.

Another clip highlights a debate moment between Romney and then-Sen. Ted Kennedy in 1994. An exchange between the two about health care turned sour for Romney when he said he wasn’t prepared to give an estimate for how much his health-care proposal would cost. Watch here or below:

See the “Artifacts of Character” series here and get more information about “The Choice” here.

According to NewsHour partner CMAG, the Obama campaign’s “Sesame Street” ad, which we noted Tuesday, is airing on cable but not on local television in battleground states.

The National Rifle Association is running ads against President Obama in Ohio and other states. The 15-second commercial urges voters to “defend freedom, defeat Obama.”

Watch the spot here or below.

Politico has a piece looking at the price campaigns are paying for television ads. “Voters in Columbus, Ohio, saw 30-second television ads for both Barack Obama and Mitt Romney while watching ‘Wheel of Fortune’ on their CBS affiliate over three days in September. For Obama’s team, the order per spot cost $500. For Romney’s, the price tag was more than five times steeper at $2,800 per ad. That gap is an outgrowth of an unusual TV-buying strategy by the Romney campaign,” write Maggie Haberman, Alexander Burns and Emily Schultheis.

The nonpartisan group reported that college enrollment is up 37.3 percent since 2000 and that:

College Hispanics have increased 87.5 percent; black students, 75.6 percent. Whites still comprise the majority of college students, at 60.5 percent. Women in college now substantially outnumber men; in 2010 there were 11.9 women enrollees and 9 million males. More than 57 percent of 2010 grads were female, too.

to sit in a stadium many of them voted against MT @hotlinereid WaPo: DC city council will recess early so members can get to Nats game

Katelyn Polantz and Geoffrey Lou Guray contributed to this report.